‘Game of Thrones’ Review – “Mother’s Mercy”: The Mother is not Merciful

**Spoilers through the fifth season finale of Game of Thrones**

Well, that’s it, folks. Another season down and now we’re left to wait an entire year until a handful of questions can be answered and another hundred characters can die. The season five finale of Game of Thrones, “Mother’s Mercy” was a gruesome affair, probably the most brutal of any Thrones finale, and it felt fitting given the tone of the entire season. I don’t know if they’re making salary cap room for season six or what, but goodness, HBO. I see where you stand on happiness.

Last week, Stannis did the unforgivable. He lost a significant amount of fans by listening to Melisandre, as well as half of his army and his wife. Things are bleak for Stannis, but still he presses on, determined to chase his destiny, even if it means sacrificing the rest of his loyal followers. As he stands outside of Winterfell preparing a siege, Ramsay Bolton and his men charge out of Winterfell and slaughter the Baratheon army. 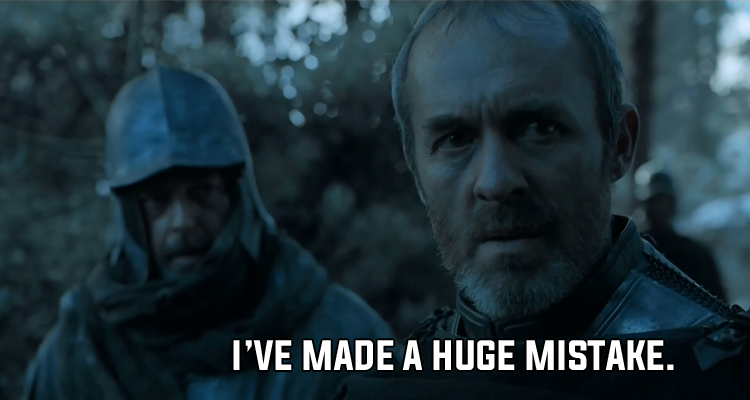 Miraculously, Stannis survives the initial onslaught, even retaining enough strength to fight off two much younger soldiers. But that final act, as well as the loss of everything he had worked for, breaks Stannis, and he slumps against a tree, waiting for death. Brienne appears at that moment, in what feels like her first scene of the season, and gives an impassioned speech about getting revenge for Stannis’ murder of Renly. Resigned to his fate, ever the stoic Stannis, he tells her to go on and do her duty. Brienne pulls back the sword and slashes as the screen fades to black. If Stannis is dead, it would be the first fade to black death we’ve seen thus far, but I have a feeling there’s a reason for not showing the dead king. That being said, if Brienne did do her duty, that means that the winner of the War of the Five Kings is Balon Greyjoy and I think that is only because the writers forgot he was around.

While doing her duty, Brienne misses the signal she’s been waiting for all season, as Sansa finally lights a candle in the broken tower of Winterfell. GIRL. SRSLY. WHAT TOOK YOU SO LONG. As soon as Littlefinger left, you should have lit that candle. However, it seems Sansa needed to pick her lock with a corkscrew first in order to level high enough to light a candle. I don’t make the RPG rules for Game of Thrones, but their skill tree is busted.

As Sansa returns to her room, she runs into our favorite Overly Attached Girlfriend who threatens to mutilate the poor Stark girl because goodness knows she hasn’t had enough of that, but Theon intervenes and booty bumps Myranda to her death. The pair of prisoners, like Stannis, soon realize they’ve made a huge mistake and jump off the side of a CASTLE WALL into a snow bank. Apparently Sansa forgot what happened to Bran in episode one.

We start with Ser Meryn Trant being his usual, no good, very bad self while he beats young girls, and I have to sigh at this development. Yes, Ser Meryn is a bad dude. We all know that. We’ve known such for years now. Instead, I would have preferred a more complicated decision for Arya. Instead of having Ser Meryn visit a brothel to torture little girls, have her catch him doing something nice. Then when she gets the opportunity to kill him, she is torn between getting vengeance for Syrio or leaving him be. Naturally, driven by her need for revenge she would kill him anyway, which would still lead to her punishment from Jaqen. It would have been much more interesting to watch her internal struggle than her killing a dude who is so easy to hate. What happened to shades of grey, Game of Thrones? HM? Oh, and Arya’s blind, so…cliffhanger.

Tyrion, Jorah, and Daario are writing a ballad about missing their Queen when Grey Worm shows up and is like, “What gives, you whiners? I almost DIED. Let’s go get her!” Daario reminds the Unsullied that he’s still kind of cut in half and that Meereen needs capable leaders while Dany is gone. Tyrion, Missandei, and Grey Worm are elected to stay while Jorah and Daario hop on horses to go find the woman they love. Tyrion then gets a visit from our favorite eunuch, Varys, and knowing what I know from the books, I was TERRIFIED something horrible was about to happen to Tyrion. Instead, they just chat. Phew.

Dany is vacationing in what looks like Northern Ireland with her eldest son and after visiting all the sights, Drogon no longer wants to be seen with her. He goes all scumbag Charizard and doesn’t listen to Dany because she doesn’t have enough city-conquering badges and he’ll use Fly when he damn well pleases. 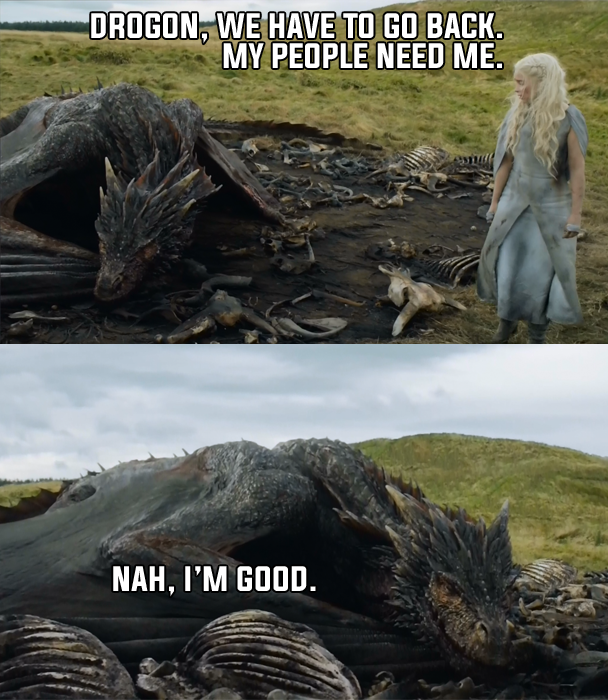 When Dany finally gets sick of Drogon’s teenager shit, she decides to go off and look for food herself, except instead of food she accidentally bumps into a Dothraki khalasar. They circle her singing, “Ring around the Khaleesi, pocket full of arakh-ies. Stabby, stabby, the Queen falls down.” And then Thrones ends another segment on a cliffhanger.

Down at the docks of Sunspear, everyone is saying their goodbyes, apologizing for all the attempted murder like any normal group of soon-to-be-in-laws. Doran brings his favorite chair with him to bid the Lannisters and his son adieu and Ellaria gives Myrcella the most awkward goodbye kiss ever seen on TV. Jaime and Myrcella then share a moment on their boat and the former decides that now is the best time to tell her the truth about her daddy. Myrcella is all, “Silly Uncle Jaime, everyone knows you’re my Papa Bear.” Jaime is relieved and gets to understand how Stannis felt while awkwardly hugging his daughter. The fuzzy good feelings last all of ten seconds because then Myrcella gets a bloody nose and collapses. Gotta figure Cersei is going to be pretty upset about Jaime’s ability to return her daughter. He’s 0 – 2 in protecting his children. Ellaria and the Sand Snakes stand on the docks cackling over poisoning the princess and as the scene ends we don’t know if Myrcella is dead or just sleeping, so…cliffhanger.

After days of licking water off the floor like a dog, Cersei finally gives in to the High Sparrow and confesses her sins. She conveniently omits her nearly lifelong affair with her twin brother, but hey, Cersei can be a convincing liar, especially when she wants to get back to her suffering son. In order to atone for her incest and adultery, Cersei is forced to walk naked through the streets of King’s Landing until she reaches the Red Keep.

I make no secret of my love for both Cersei and Lena Headey, but there’s no way anyone can argue that Headey didn’t NAIL that scene. Her mixture of disgust, despair, and determination was nothing short of brilliant. As the crowd throws food and other questionable things at her, she looks up to the Red Keep for strength, and I felt as though I could see her thought process. “I’m almost to Tommen. Almost to Tommen. Tommen. Tommen.” With her hair shorn, feet bloodied, and body covered in feces, the hated Cersei Lannister became sympathetic. However, Kevan Lannister and the rest of the Small Council have no such concern for the Queen Regent as she stumbles through the Red Keep doors. Only Qyburn rushes to her aid, offering support. He then introduces her to the newest member of the Kingsguard, whom I assume will come in handy when Cersei has her trial against the Faith Militant.

Jon and Sam have a heart to heart in which Sam asks to head to Oldtown with Gilly and the wee baby Sam so that he might train to become a maester and be more useful to the Night’s Watch. Jon hesitantly agrees and is glad the end of the world is working out well for someone.

Melisandre then returns to the Wall with news of Stannis’ defeat, as well as the death of Shireen, which hits Davos so hard that I hurt more watching his reaction than seeing the death itself. 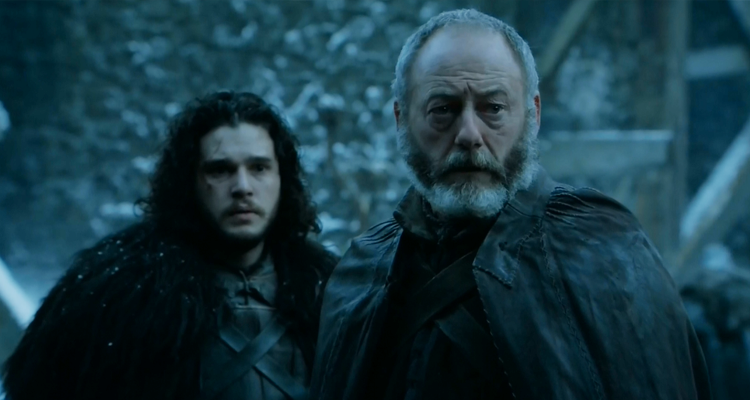 Ah, and now we’ve reached the moment that book readers have been waiting for since the Red Wedding. Jon is doing his Lord Commander mail duties when Olly bursts through the doors with a smile on his face because there’s a wildling who knows about Jon’s uncle Benjen. Jon leaps from his chair in excitement; if he can find his uncle, maybe then he’ll have someone to turn to for advice on how to unite crow and wildling. Finally! Except, when Jon gets to the wildling, he instead finds a sign labeled, “Traitor.” The brothers of the Night’s Watch take turns stabbing Jon through the chest, ending with an “Et tu, Olly” moment, and Jon collapses to the ground, lifeless. For what it’s worth, I refuse to believe he’s actually dead.

I got played HARD with the “Previously on Game of Thrones” segment. At first I was mad they would remind us of both Benjen and Syrio, because it felt like a spoiler. By the time Olly appeared with news of Benjen, I was simultaneously excited to finally learn what happened to uncle Stark and annoyed that the shock had been ruined for me. However, I was trolled just as hard as Jon.

Every single plot ended on a cliffhanger. Every.single.one. You don’t want to give the fans ANY satisfaction, HBO? ANY happiness?

When Jon falls to the ground and the camera zooms in on his face, you can see what looks like a final breath, but then also a subtle change in his eye color. Now, maybe I’ve spent too much theorizing about the outcome of Game of Thrones, but I cannot help but read into that action. 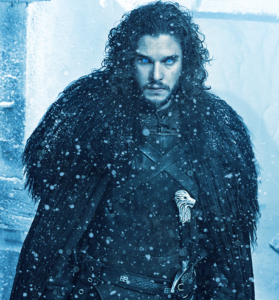