‘Fallout 4’ Review: Let’s Be Heroes In This Wasteland

This is a spoiler-free review.

Fallout 4 released a week ago and after nearly 80 hours sunk into the game, I still don’t feel like I’ve scratched the surface of what it has to offer gamers. Bethesda games are massive and full of immense detail, which makes reviewing them so early after release a bit difficult when compared to other games.

But here I am, doing my civic duty.

The world is a wasteland after nuclear bombs have destroyed most of civilization and in the latest installment of the Fallout franchise, but you’re in luck because you get to take on the role of a pre-war human being, naive to atrocities of war. After spending hours in the character creation segment, the bombs go off and you, your spouse, and infant son are sent to Vault 111 where you are then cryogenically frozen in the name of science. A few mishaps later and you’re unfrozen, escaping the vault, and on the hunt for your kidnapped son. The world is different than your character remembers, but you can’t quite pinpoint what’s changed in 200 years. Maybe it’s all the dust, radiation, and lack of obnoxious football fans.

Once you exit Vault 111 you can do anything you want in the Commonwealth, the new term for the Greater Boston Metro. Anything. You can go search for your son, sure, or you can befriend the locals and establish settlements, or you can become the Renegade of the Wastes, leaving destruction and ash piles in your wake. The choice is yours and mother of god it’s a daunting one.

For anyone who hasn’t played a large-scale RPG like Fallout, Skyrim, or the Witcher, then Fallout 4 can be incredibly terrifying and I’m here to warn you: the game is not going to hold your hand. In fact, that’s probably the biggest issue I have with the game: at no point does it offer a proper tutorial on gameplay. For a new player, the V.A.T.S. system and pip-boy can be quite daunting, especially since they aren’t explained at all in the early stages of the game. Your character simply picks up a pip-boy and goes about her business. After far too many hours in FO3 and New Vegas, those aspects came naturally to me but when it came time to craft mods and build up a settlement, I was completely lost. Even after 80 hours, I still don’t understand how much of it works and the internet hasn’t come up with comprehensive guides on the area, so I’m left to wait until someone much smarter than I can fully explain how supply lines work and the crafting mods in my inventory.

I repeat: this game is NOT noob friendly. For a flagship entry into the franchise, Bethesda seems almost intent on making gamers figure it out on their own.

Why the heck do you think there were so many guides online the day after the game launched? 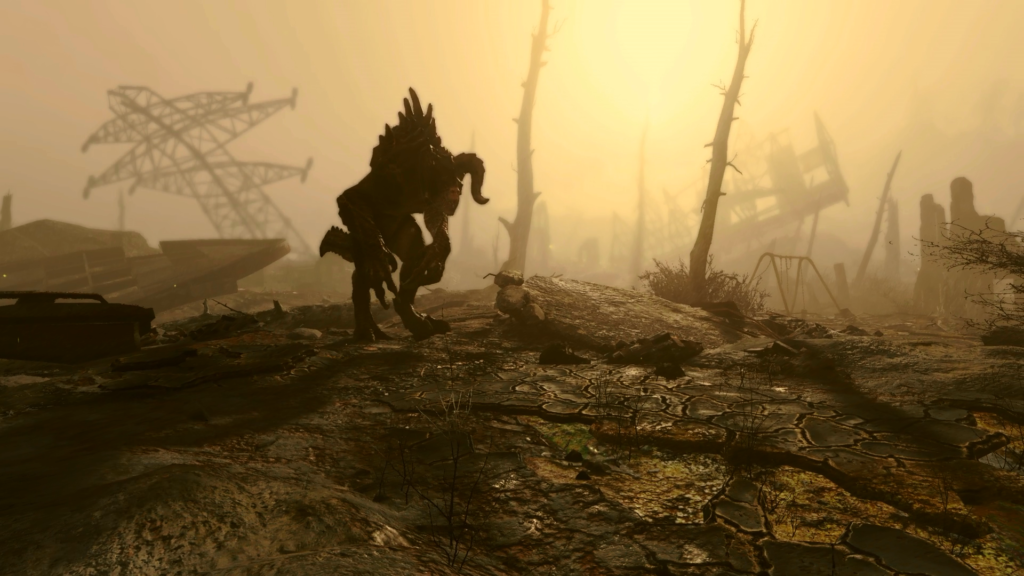 When it comes to the main story, the plot feels reminiscent of Fallout 3. In fact, many of the quests are the same, just the order is mixed around to throw the player off their copycat scent. And from what I’ve experienced in the side quests, there isn’t much variation. No longer are you faced with the tough choices the Commonwealth has to offer. You don’t have to decide between saving a city or blowing it up. Instead, go here and kill some thing and get caps as a reward. You’re the hero of the story so be a good little survivor and go save this town from Raiders again, would you? There are some exceptions–“The Silver Shroud” being the most noticeable one–but the game is significantly more linear than its predecessors.

Protagonist voice acting is a new addition to the game and I have to say that I love it. I know there’s complaint about it being unnecessary and taking away from the RPG aspect of the game, but role-playing as a mother searching for her son, I felt the character’s emotion at all the right points. Even her sarcastic lines felt real. And here’s a hint: use sarcasm as much as possible because it has almost zero effect on the outcome of a plot or quest and some of the lines are just hilarious.

There’s been some complaint surrounding the graphics of the game and I’m not sure I see it. Granted, the game isn’t as pretty as say, Witcher 3 or Arkham Knight but it is also a much larger game and it runs well on my Xbox One. Thankfully, I haven’t run into nearly as many bugs as I did opening week for New Vegas. Nothing has been game-breaking, truly, but I have had the game freeze on me a few times. Dialogue is mostly a miss for me, as I tend to play with subtitles (I can’t hear for shit) and many, many times I’ve lost track of a conversation because the subtitles and NPC froze. I think that this glitch is the reason a handful of my quests have been bugged as unfinished and are now stuck as unplayable. I’ve lost companions for hours at a time because their AI is kind of a mess in terms of how they follow or fight. I can’t trust any of those jerks with grenades, lest they use 8 of them on a gorram bloatfly and kill me in the process. Their “downtime” actions are neat though, in that they’ll go find something to do when you’re off shopping or searching an abandoned room. 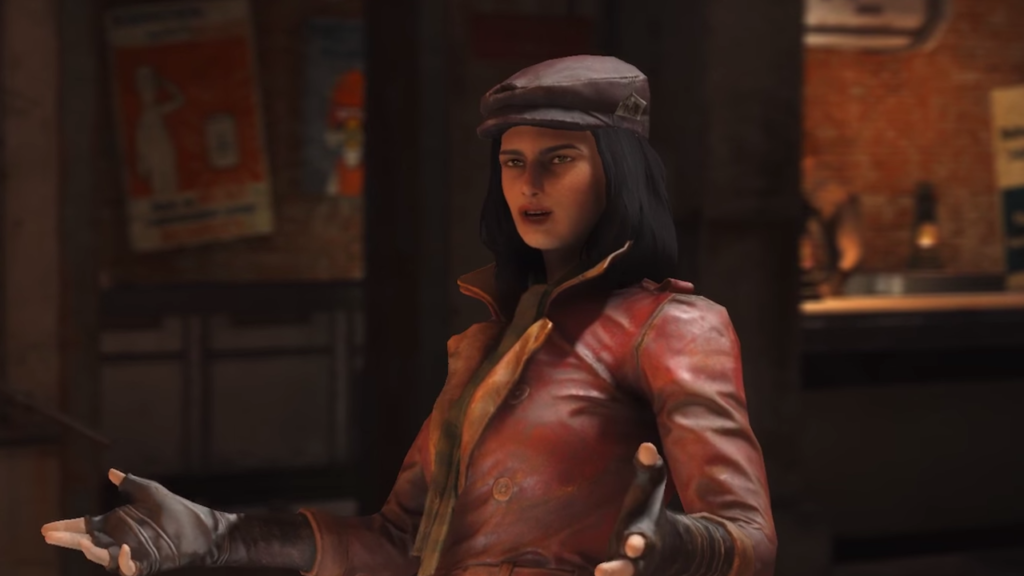 In fact, the companions have been significantly improved from recent games. They aren’t quite BioWare levels yet, but the interaction and dialogue feels more natural from traveling companions. They can’t die, only “faint” until the end of the battle when Nurse Joy magically appears to heal their wounds. I still treat them like pack mules though since now every item in the game is useful with the new building and crafting system.

For the first time in a Fallout game, you can take charge of your own settlement: building power, water, and food resources for your little scrap finders. Now we all understand why Bethesda released Fallout Shelter. It wasn’t to keep us entertained. No, silly minions. It was practice for being an overseer for when the real thing came out in Fallout 4. The building itself, leaves a bit to be desired. It’s an awesome addition, one I was incredibly excited about, but I uttered on more than one occasion, “I can’t wait until modders fix this nonsense.” (Which is an outlook I’m sad to have for such a large game.) In short, the building is a mess. There are clipping issues abound, there’s no explanation for how settlements work, and I’m not sure I understand how the “size” parameters are meant to work.

Fighting has been improved from previous games, which I’m grateful for because I’ve never been a huge fan of V.A.T.S., a targeting system that uses AP and chance to hit an enemy. Firing a ranged weapon is more satisfying than before, mostly in first-person, though. Third-person hip shooting still needs more work.

There’s no longer a level cap in the game, which gamers met with rejoice, but I have to admit I’ve found that to be more frustrating than helpful. My character is in the mid-30’s and I have still yet to find better weapons that the dollar store variants of a sniper and assault rifle. And the same is said for armor. There just aren’t any good alternatives to the power armor and it’s incredibly frustrating not knowing which armor can have leather or combat armor strapped on top of it. I love the look of the Courser uniform but I feasibly can’t wear it in a fight.

Perks feel less useful because you acquire the power armor so early in the game that you don’t have to worry about stats. I will concede that I like the idea of relying on the power armor so heavily, on being able to put my points into more crafting-oriented skills like for modding weapons and armor. It makes it more believable that my scrawny twice-frozen ass could survive for so long in the Commonwealth with the help of such technology. That being said, it should not have been acquired first thing. It becomes too much of a crutch. 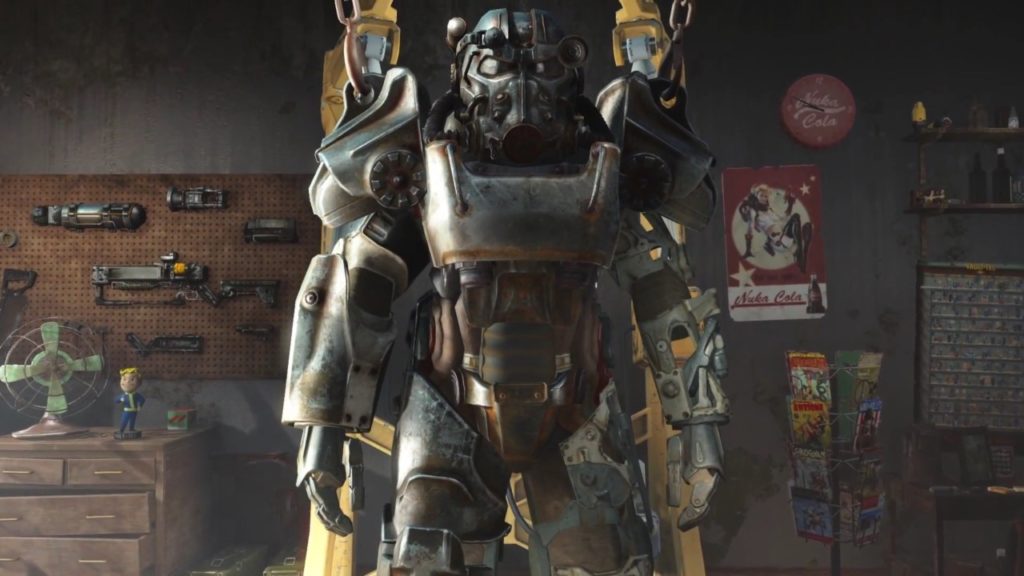 One thing the game doesn’t lack is detail. Bethesda may not be the best when it comes to the main story but they are kings when it comes to minor details. If you don’t read the terminals or listen to holotapes, you’re missing out on some really good storytelling, especially ones about the characters you travel with on a regular basis. There’s one in particular about Mama Murphy and her sway over the Raiders that I particularly enjoyed. It’s those little moments that Fallout does better than any other game. Only they could tell a story with a skeleton and a few miscellaneous items that breaks your fucking heart. It’s those little touches that make traversing the war-torn Commonwealth so exhilarating. You never, ever know what you will find.

And that’s what makes the game so fun, too. There aren’t many changes to the game–things like lock-picking and the pip-boy are exactly the same from previous installments–but there’s still so much to do. Sure, a lot of it feels redundant but then you do a quest at the Museum of Witchcraft and suddenly things are exciting again. And there’s nothing like the thrill of stumbling upon a Legendary Deathclaw and watching him dodge your shots as you panic and spray shots everywhere, aggroing everything in a three-mile radius.

Don’t get me wrong, the game is a worthy entry to the Fallout franchise. It’s fun to play and I’m sure I’ll easily sink another couple hundred hours into the game because I WANT to explore the Commonwealth. That being said, don’t expect anything innovative. The building is a nice touch for fans of the survival genre like myself but I imagine it’ll go mostly unused by the average gamer. Instead of being Fallout 4, the game feels more like Fallout 3 ½, and really, I’m okay with that.

Fallout 4 was reviewed on the Xbox One.