Some of my favorite video games are the ones that I can pop in, hand a few friends some controllers and with little explanation we’re off and running–good ol’ party games! I’m talking the Rock Bands, the #IDARBs, the Jackbox Party Packs of the world. As much as I love my hardcore shooters and adventure games, there is something uniquely incredible about playing a simple yet fun game with friends. (Especially when I win!)

So it should come as little surprise, that I jumped at the chance to review this month’s Game with Gold free game on the Xbox One, Knight Squad, from Chainsawesome Games. “Knight Squad is an 8 players top-down Bomberman meets Gauntlet game.” That’s Chainawesome’s description and honestly the best one for both gameplay and its art style. Using only the left stick to move and any face button to attack, Knight Squad nails the simple part of the equation, but is it any fun? Well…

In Knight Squad you select your knight of choice, represented by one of the many colors of the rainbow. Knights enter an arena and battle it out in a number of game modes where one hit is enough to take you out. The modes range from variations of classic team deathmatch and domination to a 4v4 game of soccer, but you know…with swords and stuff.

Strewn about the arena are both weapons and power-ups for your knight to gain an advantage over his opponents. The weapons range from theme-specific, like bow and arrow and crossbow, to the more obscure, such as a laser gun and lightning wand. Complementing your arsenal are power-ups such as a shield that absorbs one otherwise fatal hit, a gang of minions to help attack enemies, and the ability to go full kamikaze. 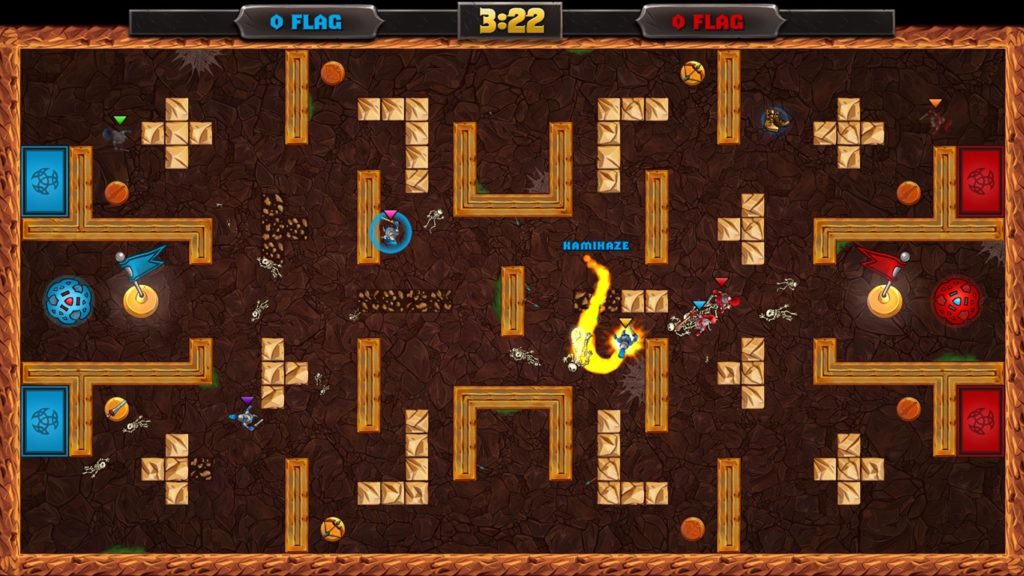 Each mode can be played on a number of maze-like maps that change up how you will approach each game type. Combining the many modes, weapons and maps allows for what seems like a ton of options. Unfortunately, what it seems like and what it is are two very different things.

Let’s start with what it is: Knight Squad is fun. There is something satisfying about swinging your sword a split second before one of your opponents or grabbing a shield on your way to scoring a flag just before you get hit with a crossbow. With its simple controls, even my 7-year-old was able to have a good time. Sure, he wasn’t getting quite as many kills as me (because I’m the best) but he was still laughing the entire way. (Ed. note: He’s not that good. I played with him.) Also, playing online worked flawlessly, with no issues in any of the matches I played.

So what isn’t Knight Squad? Diverse. After spending time with every game mode–online, against bots, and locally with friends–I can tell you that while every match looked different, they all kind of felt the same. That’s not to say it wasn’t fun, just that the game boils down to who can land a hit first every time. Once I got the timing down, I was dominating both local and online games. I’ll tell you who I wasn’t dominating–the AI.

When you can’t find 7 other friends, or don’t want to go online and get wrecked (probably by me…did I mention how good I am at this game?) you can practice against bots. The bots range from easy to hard but you wouldn’t know it. When I first started playing, I was getting destroyed by the bots on easy. Even now, after hours of play, I still find the AI cheap and unfair with an unrealistic idea of what “easy” is. Now this may seem like a silly complaint but when I gave my wife and sister, two people who rarely pick up the controllers, a chance to play against the bots they both mentioned how little fun they were having because of the difficulty. For a party game, alienating the inexperienced is a big problem.

Beyond the arena game modes, players can also take on a series of challenges. These challenges task the knight with dispatching a group of enemies as fast as possible. The different enemies all have a weakness that must be exploited to defeat them. Your times are then placed on a leaderboard where you can see where you rank against your friends and the world. The problem is, the challenges aren’t much fun. The enemies don’t seem to follow any logic, so often success seems dependent on luck and patience instead of skill. Also, the appearance of times that don’t seem possible on the leaderboards reeks of cheating/hacking and doesn’t drive one to chase the top.

Knight Squad shoves simple controls and a whimsical attitude into a party game package with some success. Playing with a full match of human players is a fun and competitive experience. That’s in stark contrast to matches involving bots, where often times frustration is the end result. Even with a tweak to the AI, Knight Squad’s biggest sin lies in how monotonous every match feels. As a free game on Xbox One via Games with Gold, Knight Squad is a nice party game for a few matches or a quick time killer online. As a $14.99 product, I’m not sure it has the lasting appeal to justify the purchase.

Previous article
‘Fallout 4’ Review: Let’s Be Heroes In This Wasteland
Next article
How Did Marvel’s Jessica Jones Get Her Powers?