I’ve been excited about Showrunners: The Art of Running a TV Show since I met one of the producers a few years ago at San Diego Comic Con. Ryan Patrick McGuffey was excited to be a part of them team intent on bringing one of televisions most mysterious jobs into the bright, on camera lights. The project was in the beginning stages but every word out of his mouth bred more and more excitement – and now it’s finally here! 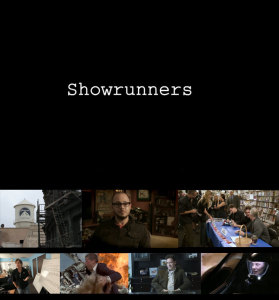 Des Doyle directs a documentary that follows the work and lives of some of the biggest names in the business–JJ Abrams, Joss Whedon, Jane Espensen, Hart Hanson, Damon Lindelof, Steven McKnight, JH Wyman and SO many more. It’s a behind the scenes look at some of the greatest television shows of all time you won’t get anywhere else!

“Showrunners” is the first ever feature length documentary film to explore the fascinating world of US television showrunners and the creative forces aligned around them. These are the people responsible for creating, writing and overseeing every element of production on one of the United States’ biggest exports – television drama and comedy series. Often described as the most complex job in the entertainment business, a showrunner is the chief writer / producer on a TV series and, in most instances, the show’s creator. Battling daily between art and commerce, showrunners manage every aspect of a TV show’s development and production: creative, financial and logistical. Featuring interviews with the showrunners behind Lost, Boardwalk Empire, Bing Bang Theory, The Good Wife, Sons of Anarchy, Spartacus, Buffy the Vampire Slayer, Battlestar Galactica, Person of Interest and Firefly.

Catch Showrunners: The Art of Running a TV Show in theaters (if you’re lucky enough to live where it’s being released) or download it on iTunes and watch from the comfort of your home!