This week, Dead of Summer showed glimmers of hope in “Mixtape”. I think the main problem with this show is the disconnect between the characters stories and the mystery of the camp. Having said that, I have a few suggestions for how to make this show better:

It is movie night at Camp Stillwater, which means half the staff can leave for a night off while the remaining four counselors watch the entire camp. Joel has been put in charge of deciding who stays and who goes. As he approaches the crew with the sacred “Night Off” list, Jessie shouts out “Oh look here comes Spielberg” to which Joel takes great offense. If I were Joel I would take offense too because when I think of teenagers and Steven Spielberg together I think of Dawson Leary. And even though Dawson Leary doesn’t exist yet in 1989 NOBODY wants to be compared to Dawson Leary. Drew, Joel, Jessie and Blair are charged with staying at camp to take care of those snotty campers while Amy, Alex, and Cricket are given the night off.

Jessie isn’t thrilled that Amy will be spending alone time with Garrett on her night off, so Jessie approaches Cricket with a mutually beneficial proposal. All Cricket has to do is tell Deb that Jessie’s grandmother died, and Deb will make Amy switch her night off with Jessie. With Amy safely at camp, Jessie can have Garrett all to herself and Cricket is free to throw herself at Alex.

I do understand Jessie wanting Garrett. He was her first kiss and crush. He was the boy who saw her as an ugly duckling before becoming a swan. I cannot though, for the life of me, understand how Cricket finds Alex attractive. With every second that Alex is on screen my hate for him grows. For the first half of this episode, Alex basically treats Cricket like an annoying fly, shooing her away whenever she came near so he could keep hitting on Amy. He practically laughs in her face when she invites him to the A&C cabin to meet up. He walks right past her to put his hand on Amy’s lower back even though Amy has made it very clear she thinks he is scum. And then finally at the bar instead of buying her the screwdriver he promised, he brings up an embarrassing story about the time she threw up during color wars and excuses himself to use the bathroom. I hate this kid so much.

After Alex gives Cricket the slip yet again, Jessie comes over to give her girl some advice: make Alex jealous by flirting with Damon, the townie drug dealer. Following Jessie’s brilliant plan, Cricket flirts with Damon for a total of two minutes before he invites her to his car. She ignores the giant neon “Danger” sign flashing above Damon’s head and follows him to his car without telling anyone where she is going. Cricket starts to realize that leaving the local bar with the townie drug dealer may not have been the best idea when he starts speeding like a maniac. Then she finds a red marker and knife in his glove compartment. To my surprise, Cricket is actually proactive and draws the knife to Damon’s neck causing him to swerve off the road. A short second later, Garrett and co. come speeding up to the scene and call Damon a stalker:

Damon: Stalking? Come on, she was begging for it.
Alex: What’d you just say?
Damon: Every camp has a whore!

Next thing you know, Alex is defending Cricket’s honor by beating Damon’s ass. I seriously cannot figure out Alex. What was his motive here for defending Cricket? He obviously doesn’t respect her, or care about her, and he already knew Cricket liked him. Did he think if he defended her it would get back to Amy? Was it more about being the alpha male in this situation? Or was it because he realized that Amy wasn’t going to sleep with him that night, so Cricket was his only option? I am leaning toward that last option because as soon as they get back to camp Cricket and Alex start making out in Alex’s bunk (remember all the ‘campers’ are outside for ‘movie night’). While they are making out on the floor a mixtape labeled “Cricket” drops down from Blotter’s cubby. And finally, finally, finally, Cricket realizes that she deserves better than Alex. She deserves a guy who made her a mixtape.

Even though Mixtape was a Cricket-centric episode, we don’t learn that much more about who she is as a character. They continued to reinforce that Cricket is insecure by showing that she was overweight during her senior year and wrote about her being a slut in the boys’ bathroom at school. And they showed it some more when she decides to ditch Blair so she can sleep with a stoner guy. And a bit more when the next day in school said stoner boy ignores her and she breaks down. Okay Dead of Summer, I believe you, Cricket is insecure. I actually knew this from all of her scenes in the first two episode, but thanks for hitting that nail a few more times just to make sure I understood. The only enlightening thing from her flashbacks was how she reacted to discovering that her mother knew about her father’s affair, and did nothing about it. Her mother’s awful advice to Cricket was “sometimes women like us have to settle.” Dear every mother in the world, NEVER EVER say that to your insecure daughter. But in the end, that conversation stuck with Cricket, and she realized that she doesn’t need to settle for a sociopathic douchebag. She should be with the guy who made her a mixtape.

Incidentally, said boy with a mixtape may be dead or at the very least be missing a hand and a baby bottle. 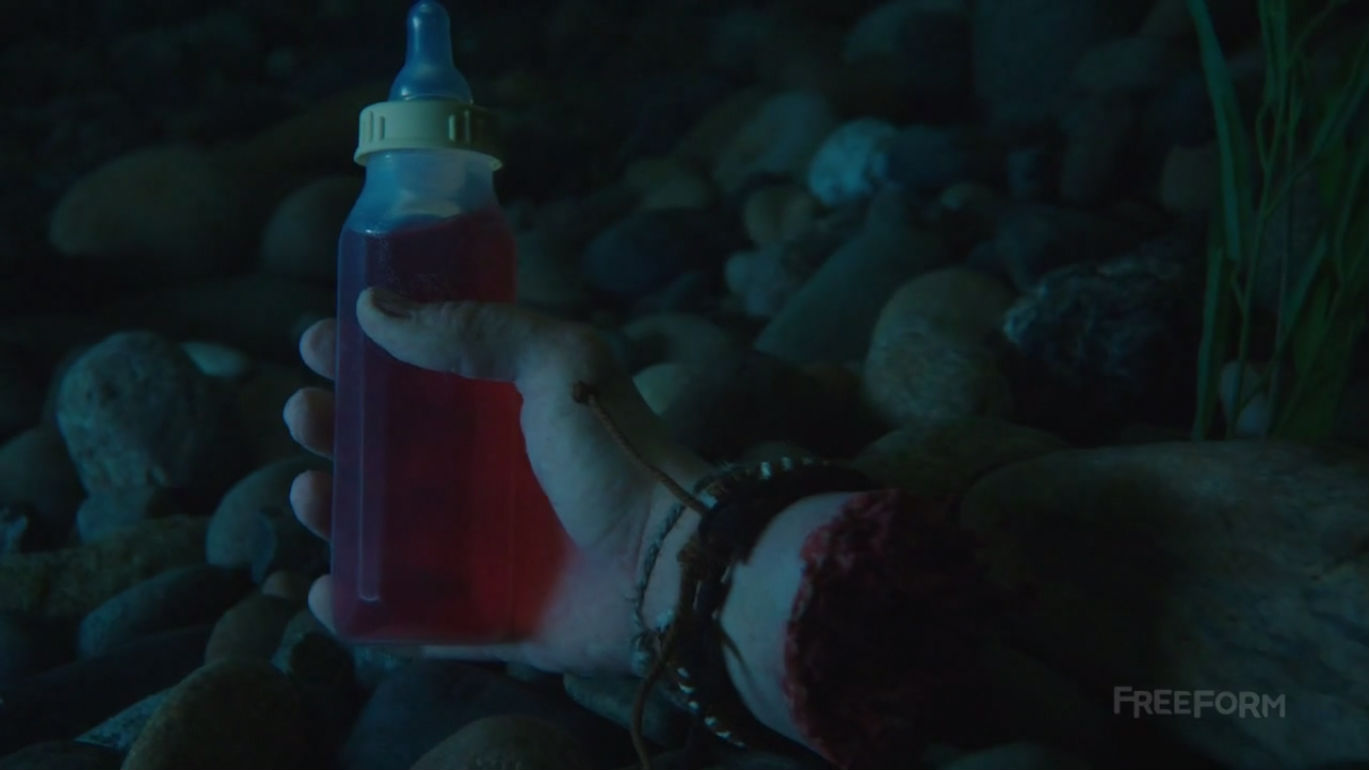 Even though “Mixtape” was “Cricket’s episode,” Amy was definitely the star. After giving up her night off, Amy is helping Joel get ready for movie night by splicing film and having a deep philosophical discussion:

Amy: “Isn’t reality all in our heads too.”

Touche Amy. Touche. Joel doesn’t understand why Amy isn’t upset that she had to give up her night off for Jessie’s dead grandma. Amy rolls her eyes at the fact that Joel believed Jessie’s lies

Amy: Camp is about more than finding the guy for me. It’s about having friends. Making friends. And the last way you do that is by making an enemy of someone like Jessie.

While listening to Amy talk about the value of camp alone would have made me love her, she follows this up with something even more amazing. The next morning, Amy finds Jessie sitting alone in that random counselor hangout lounge bunk. She sits beside her and offers Jessie her condolences and homemade cookies from movie night. See, when Amy’s grandma died her best friend brought her cookies, and they really did make her feel a little better. She hopes that these cookies will give Jessie just a little bit of comfort. Jessie’s face is showing all kinds of sad and guilty, and as Amy walks away, a huge smirk creeps onto her face.

Seriously though, how amazing is that. I can’t think of a more satisfying way that Amy could have handled that. That’s my girl Amy!

Also, things start heating up between my two favorite pairings, Deb/Joel and Blair/Drew.

Deb and Joel are trying to decide what movie to show the campers when Joel suggests Harold and Maude. Seriously Joel? ( I will admit, I had to google this movie to see what is actually about) Deb dismisses the idea saying that they shouldn’t show the campers a movie about a man dating a much much older women. This obviously segues into them talking about their own budding relationship with Joel revealing that he feels like he can tell Deb anything, and Deb coyly looks away. I am still digging this relationship.

Meanwhile Drew and Blair are strolling over to movie night and Blair is having an extreme case of verbal diarrhea. He literally can’t stop words from coming out of his mouth. So, to cure Blair’s condition, Drew kisses him to shut him up. Aww YAY!

The “Mystery” of Camp Stillwater
I was contemplating leaving this part out completely, as I have no interest in it, but I guess since it is supposed to be a major part of the show I am recapping I should discuss it.

Hmm, where to start. Okay, Cricket has dreams of people in wooden horse masks following her and stealing her shoes. 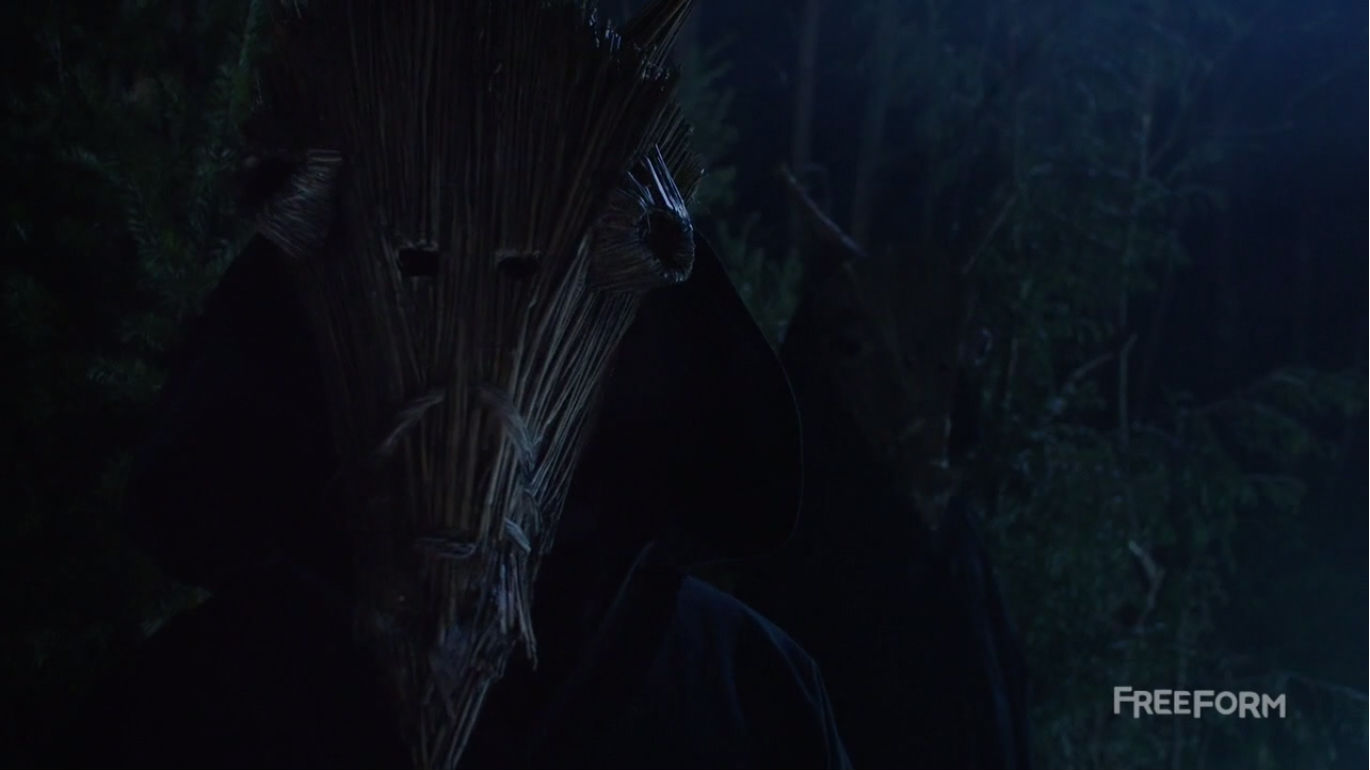 Turns out these horse mask men are Damon and his crew. Also, it wasn’t just a dream, they really did steal her boots. They also possibly killed Blotter (see above). The reason that he kidnapped her in his car was to steal her scrunchy, which they needed to put around a deer heart to perform a satanic ritual.

While the townie drug dealers are performing this satanic ritual Cricket puts on her string bikini to go play volleyball with her campers while Joel, the shirtless director, films the game. 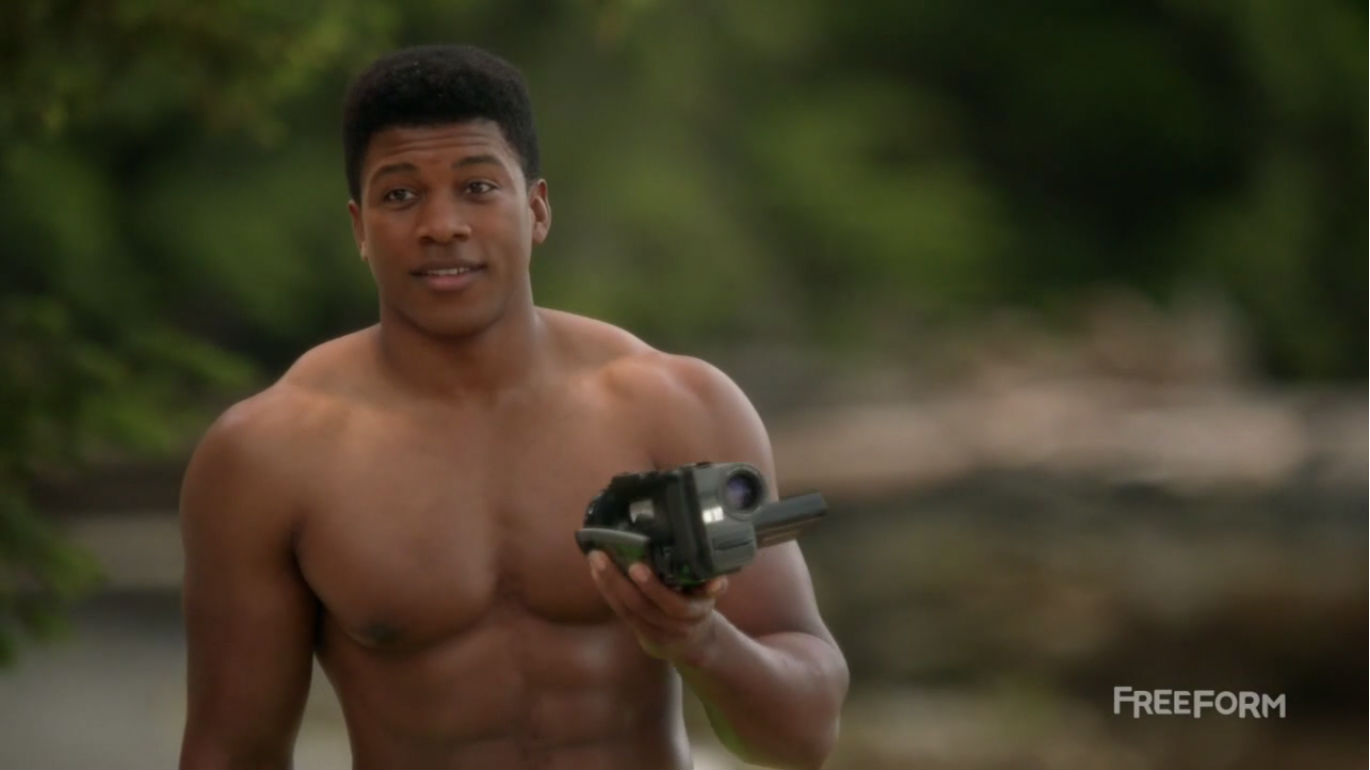 When someone hits the ball into the lake, Amy offers to go in and get it because she is a sweetheart. But as she wades in the lake, the water around her starts to turn blood red, a storm starts a brewing and she gets electrocuted. Oh, and Deb has a creepy horsemask in her wardrobe. That’s about it. 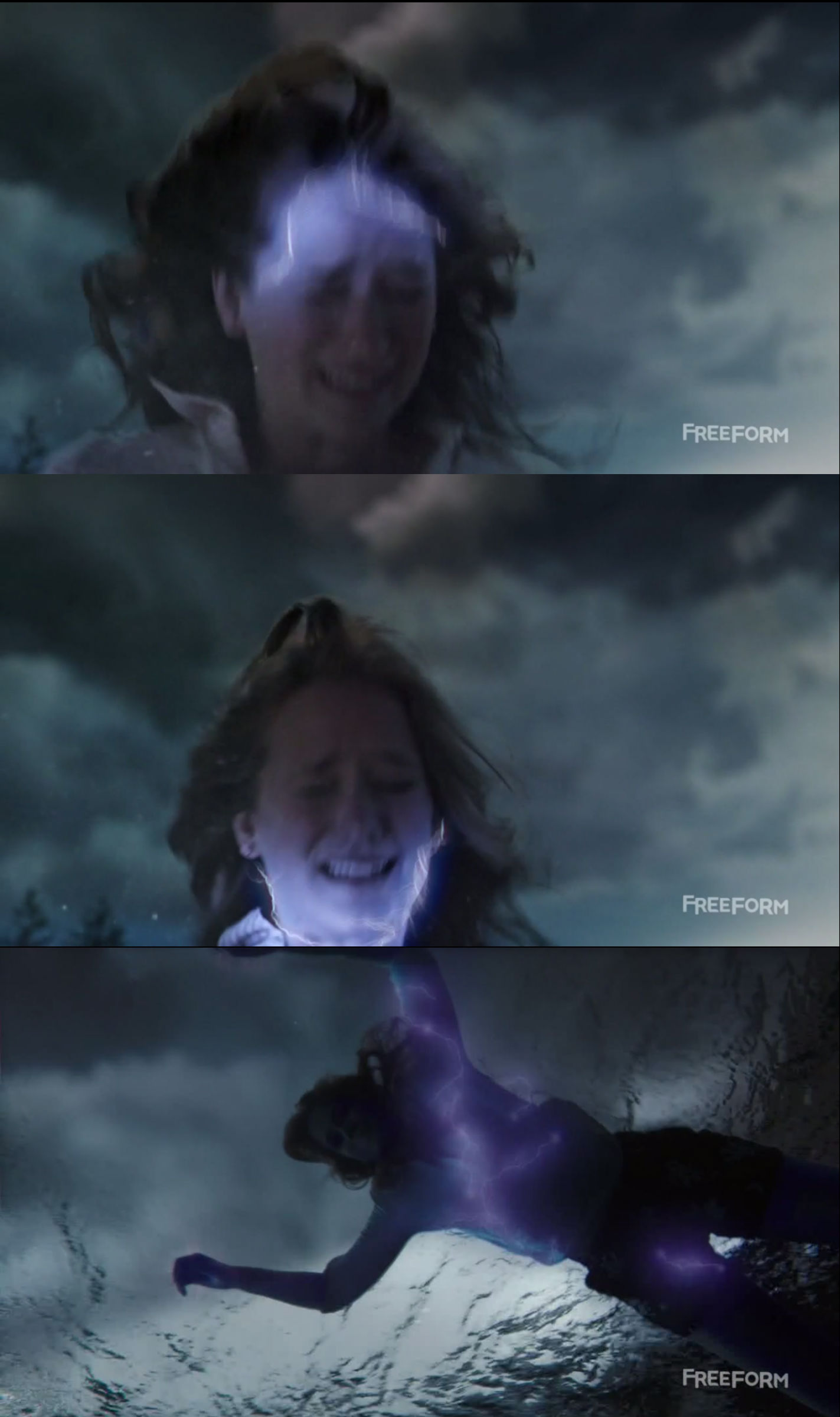 (This isn’t really what it looks like when someone gets electrocuted in the water, right?)