‘Ghostbusters’ Review: Haters to the left

There’s a metric fuck ton of vitriol surrounding the Ghostbusters reboot right now and for the life of me, I can’t fathom why. Because of the discrepancy between bad trailers and good reviews, the babies of the internet are shitting their pants. Well, go ahead and get angrier, internet, because this is a happy review, in which I insult very few people because I’m in a good mood. I’m a fan of the original Ghostbusters and you know what? I loved the reboot. Sure, it had it’s problems but as far as entertaining summer movies go, it’s pretty damn good. Paul Feig’s Ghostbusters is like being attacked by a pack of puppies. Occasionally you get peed on or licked on the inside of your mouth, but they’re still puppies. Adorable, slime-covered puppies.

Starring Melissa McCarthy, Kristen Wiig, Leslie Jones, and Kate McKinnon, Ghostbusters follows three scientists and one science fan as they, well, try to put an end to paranormal activity in New York City. Kristen Wiig plays Erin Gilbert, an uptight professor at Columbia University who wants nothing more than to be normal and go unnoticed. Being friends with McCarthy’s Abby doesn’t afford her such luxuries, however, as the pair are soon whisked into a world of ghosts and slime, and it’s anything but normal.

The first 20 minutes or so of the film are slow. Our introduction to the paranormal problem is mediocre at best, but once Wiig and McCarthy are on screen together, it doesn’t matter. Theirs is a chemistry and a relationship worth rooting for. Sure, I could have done with more moments of them alone, delving deeper into their tumultuous history, but the movie moves quickly as it is and covers a lot of ground in its two-hour runtime. As for the other characters, Chris Hemsworth is perfect as the gorgeous and clueless receptionist and Kate McKinnon as the eccentric Holtzmann was definitely sending me some sexual signals throughout the film. (Kate, call me.) Leslie Jones gets the worst dialogue of the bunch, even at one point shouting the cringe-worthy, “No! I’m a Ghostbuster!” Despite being criminally underutilized, Jones still makes good use of what she’s given and comes out as one of the more memorable characters of the group. 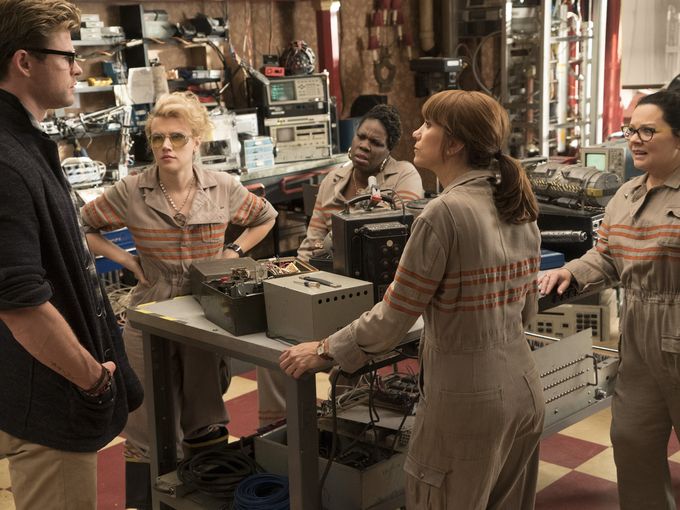 Let’s be real here, Ghostbusters doesn’t exactly tread new territory, sticking pretty close to the familiar beats of the original. In fact, I’d argue the reboot stuck too closely to the original and relied heavily on callbacks and cameos for humor and nostalgia’s sake when they should have been forming their own moments. When Ghostbusters relies on its own brand of humor–for instance, reading internet comments or making use of McCarthy and Wiig’s slapstick comedy–is when it really shines. At one moment, during the climactic battle of the film, there’s a slowed down montage of the heroes taking down ghosts, some in comical ways, some bad ass. As the battle picks up steam, so does the music, and note by note it morphs into the iconic theme. As a fan, that is a nod I can appreciate.

One of the best parts of the film was McCarthy’s role as the leader of the group. Oftentimes in ensemble cast movies, for both men and women, the leader is the pretty, charismatic one, while the chubby, intelligent one is relegated to the sidekick role. It would have been very easy, almost expected, for Ghostbusters to use McCarthy as the lovable but clumsy best friend to Wiig, but they didn’t. McCarthy’s Abby is the reason for the Ghostbusters, she spurns them forward and drags them kicking and screaming to the finish line. She’s a born leader, able to see others for who they are, beyond the labels, beyond the pretty faces, beyond the oddball exteriors. In short: I love her almost as much as love Holtzmann.

And on that note, let’s get into the nitty gritty of having four female leads in one movie. At no point did Ghostbusters feel like a “girl movie”. In fact, the characters, both main or otherwise, hardly make reference to anyone’s gender. There’s no comment from a minor character about how they’re female scientists or even a surprised reference about how good it is for women to have female professors in science fields. For all the scathing comments about how Ghostbusters was pushing an agenda, there was a surprising lack of an agenda. It was awesome just to have four kick ass and funny leads in a movie who also just happen to have vaginas.

If you go into a movie like Ghostbusters and try to take it seriously, you’re going to have a bad time, because this movie doesn’t even know how to be remotely chill. The film knocks out clever one-liners like an episode of Gilmore Girls, fast-paced and witty, taking no prisoners in its humor. It’s loud, it’s crass, it takes plot and stuffs it in a garbage can behind the chinese restaurant and then poops on it. If you’re looking for some explanation as to how the science works, how Holtzmann manages to make so many weapons so quickly, or any reasonable theory as to what happened to Bill Murray, you won’t get it. Instead, what you will get is some pretty awesome action sequences, killer gadgets, and campy humor that has no problem poking fun at its detractors. 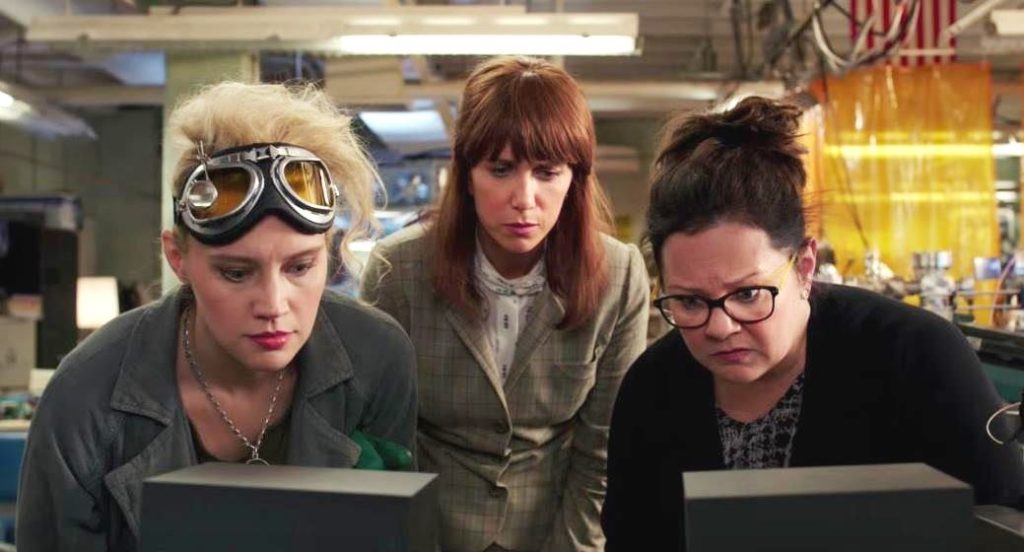 By and large the worst part of the film is its villain. So much work was put into making our heroes likable that when it came to the villain, Ghostbusters phoned it in and decided a white dude with control issues and a bad haircut was the best they had in them. Too much henchman, not enough true villain in him. Such a waste. And goodness, he’s the caricature of a “bad” villain. Not only does he monologue, talk to himself, and keep a diary with his plans for world domination, but he was bullied as a child and hates people. You know who else was bullied as a child and hates people? Magneto. But you don’t see him pulling that generic bullshit. In fact, the villain (whose name is Rowan and makes me roll my eyes) is the only one who makes reference to gender in a scene where he tells the heroes they “shoot like girls.” (Oh, no!) I can only imagine that he was created an amalgam of internet commenters as a way to further stick it to haters.

All in all, Ghostbusters isn’t going to win awards for its reboot, but it definitely doesn’t deserve the hate or the unjustified 4/10 rating currently sitting on IMDB. Kate McKinnon alone earns the film at least a 6.5/10. Add in the others and you’ve got an entertaining two hours of movie. In a summer of bad blockbusters, Ghostbusters is solid fun, full of action and humor. It’s funny. I mean, really funny. If you’re a fan of Paul Feig’s movies, SNL, or even just like action and pulpy comedy, give Ghostbusters a shot. It won’t disappoint. Haters to the left.