‘Dark Matter’ Takes A Vacation to the Multiverse in “Stuff to Steal, People to Kill”

This week on Dark Matter: it’s chaos on the Raza as the crew accidentally jumps to a parallel universe and meets alternate versions of themselves.

Spoilers through Dark Matter 208: “Stuff to steal, people to kill”.

Maybe it’s my affinity for fan fiction, but I LOVE stories that involve a parallel universe. Taking characters we know and love and flipping them around because of one change in the timeline gets me all gooey inside. I assume that’s why I love The Flash and his comics so much.

This week in “Stuff To Steal, People To Kill”, Dark Matter takes an unknowing trip to an alternate reality courtesy of their new blink drive. At first the crew believes they only jumped 1.2 miles ahead in space but once they see the Regulus 12 Data station destroyed and another Raza ship blink away, they know something bad has happened.

Turns out that in this universe, the Raza’s crew is a group of SUPER criminals whose specialty is pissing off corporations. The Mikkei Combine aren’t too fond of this quirk and they end up snagging our Raza instead of fRaza. Coerced into taking down their non-numbered counterparts, Two and Three capture Portia and Boone and take their places aboard the fRaza. It turns out disastrously because not only is Jace Corso still alive but Wexler and Tash are also crew members, causing a bit of a stink for our good-ish heroes.

After failing to stop the nuking of a mining colony, the crew of the Raza (Two in particular), outsmarts the Mikkei Combine and Truffault by using the fAndroid. They then steal the working blink drive and peace out of that messed up world, but I have no doubt that’s the last time the Raza crew will journey to a parallel universe. They end up picking up Nyx from Regulus 12, but Devon is nowhere to be seen. The episode ends with Two spasming again and passing out.

The Slow Descent of the Android

I know I’ve already theorized that the Android will betray the crew, but the further we get into these episodes, the more I’m convinced that she’s slowly changing. Early on in the episode, she has a conversation with Five that feels way more damning than the show lets on:

Five: “We’ll have the FTL up and running but that won’t get us home”
Android: “But this ship is our home.”
Five: “I mean, back to our reality.”
Android: “What difference does it make? Whether here or there, there’s nothing for us but this ship. And each other.”

It’s almost creepy how protective the Android has become the ship and it’s crew. She sounds like she’s about 3 episodes away from saying, “I’m afraid I can’t do that, Dave.” There’s no doubt that the Android loves her crew, but now I’m concerned about how she might handle the possibility of a member (say, Four) trying to leave.

Four and his home world of Zairon

Speaking of Four, his trip to the multiverse may have been the most harmful. While Six is aware he died in this universe and I have no doubt that Five is also dead (hence the fRaza’s ownership of the blink drive), Four saw what his future would be like if he gave up his life on the Raza and went to save his homeland. Portia and Boone give Four a hard time, telling him that their Ryo wouldn’t be such a pushover and while his demeanor is unfazed, it’s hard to imagine those words don’t sit with him. Similar to the Android, it looks like it’s only a matter of time before he’s pushed to his limits and makes some bad decisions.

I say it almost every week, but Five (and One, may he RIP) is the reason why the crew is the way they are. Two admits it to some extent, but it’s Six this week who reminds her of her place on the Raza:

“You know why our Two and Three aren’t like them? Because of you.”

That being said, Two still retains the ability to be more Portia-like when necessary. I’m simultaneously impressed and terrified by the darkness that inhabits Two and how quickly she can bring it up to use. Three has a much harder time being as ruthless as his pre-amnesia self. 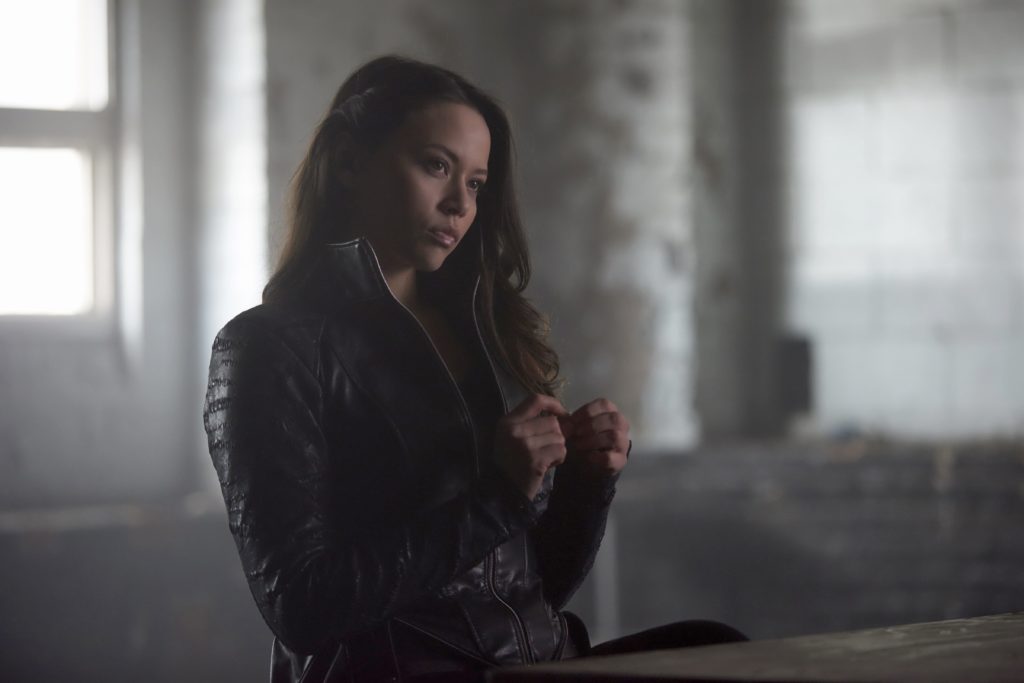 Things that Changed in the Parallel Universe

I think it’s interesting to note all the changes we saw in the episode compared to what we know of the world of Dark Matter. Here’s a totally not comprehensive list of those changes:

I’m sure I missed a bunch of other changes. Feel free to let me know in the comments!

I thought this was another solid episode for Dark Matter, but I have to concede there are a few consistency issues that are getting to me as a fan. I don’t mind cliffhanger endings, but the ones at the end of each episode are beginning to feel like a tease. We end with another hint at the drop in Two’s health and it seems we might get a resolution to that next week, but what about some of the other cliffhangers?

Also, at the end of last week it seemed like the Raza was on its last leg. How did they survive the blink drive jump to the parallel universe AND the onslaught by Mikkei?

I said it last week and I’ll say it again: I’m craving a more light-hearted episode, and soon. The show has its funny moments, like Three saying to Tash, “You hit like a super fit well-trained scary scary girl”, but I need more. There needs to be a change of pace to earn that danger the crew is always in. If they’re always in peril, then it lessens the emotional investment of those dangerous situations.

WHAT THE WHAT. DID COMMANDER TRUFFAULT MIB FOUR AND SIX?!