‘Dark Matter’: The One Where Five Saves Everyone. Again.

This week on Dark Matter: Another day, another heist; Android hits on Three; Nyx is a good friend; Five is the best criminal on the Raza.

Spoilers through episode 207: “She’s One of Them Now”

We’re halfway through the second season of Dark Matter and I have to say that I enjoy this season much more than I did the first. I don’t want to put all of that love on the death of a certain number, but it doesn’t hurt my heart too much that he’s gone, either. I will concede that with One gone, there’s a certain amount of humor missing from the group. His banter with Three was always welcome and now that Three is a big ol’ softie who secretly loves everyone, that lightness has gone away. All that being said, Dark Matter has done really well with holding my attention week to week and it’s a show I genuinely look forward to every Friday night.

“She’s One of Them Now” follows the crew of the Raza on another “Heist of the Week”. This time they’re after Alicia Renault, the woman who had Five’s friends killed over the stolen key card. They turn to Talbor Calcheck, the weasel of a handler who doesn’t seem at ALL trustworthy but hey, you’ve gotta work with slimes to beat them, amirite? After locating Renault, they decide to keep Calchek on board the Raza to make sure he doesn’t squeal. Of course he tries to run (where he thought he was going, I’ve no idea), but Nyx clotheslines that idea right out of his head.

With the money from their drug dealing escapade, the crew buys three of their own Transfer Transit pods. Bonus: while they’re inside Renault’s locked-down headquarters, they can also get a nice tan. Because they don’t know how Two’s nanites will work with the clone and Three still doesn’t trust Six, they decide to send Three, Four, and Five on the fact-finding mission. The group gets special outfits and the Android points out how “snug” Three’s outfit is on him and I cannot help but think she’s crushing on him, hard. With that upgrade, there’s bound to be some affectionate emotions swirling around up there and with Three being nicer to everyone lately, I’m not surprised at all by this turn of events.

Once in the facility, Five learns from a conveniently located computer that their key card is actually a blink drive, capable of allowing a ship to instantaneously move from one end of the galaxy to the other. Naturally, a corporation loaded with war ships full of instant teleportation is a disastrous prospect, so the trio decides to steal the adapter necessary for the technology. And it doesn’t hurt that the tech would benefit the Raza. Five steals the adapter but Three and Four get caught, beaten, and threatened by Renault. She’s on to their dastardly schemes so she keeps their clones alive with the plan to send a charge back to their pods with their real bodies, instantly frying all three of them.

Commercial break time: Five is a genius. She’s the reason why the Raza is as successful as it has been; she’s clever in ways the group can’t even imagine. That being said, how many times now has the crew been in peril because Five and EVERYONE ELSE on board the Raza forgot to cover their tracks? In a world littered with technology, they never seem prepared to handle the fact that there are cameras everywhere, that there might be someone who knows how to hack as well as Five, or that they’re going in blindly to a bad situation.

Renault decides not to fry their pods, for whatever reason. She claims to be intrigued by Five and wants her alive, but why? Is there a deeper connection between these two? Was my gut instinct right and Renault is actually Five’s mother? DUN DUN DUUNNNNN. (I hope not, but hey, I wouldn’t be surprised.) 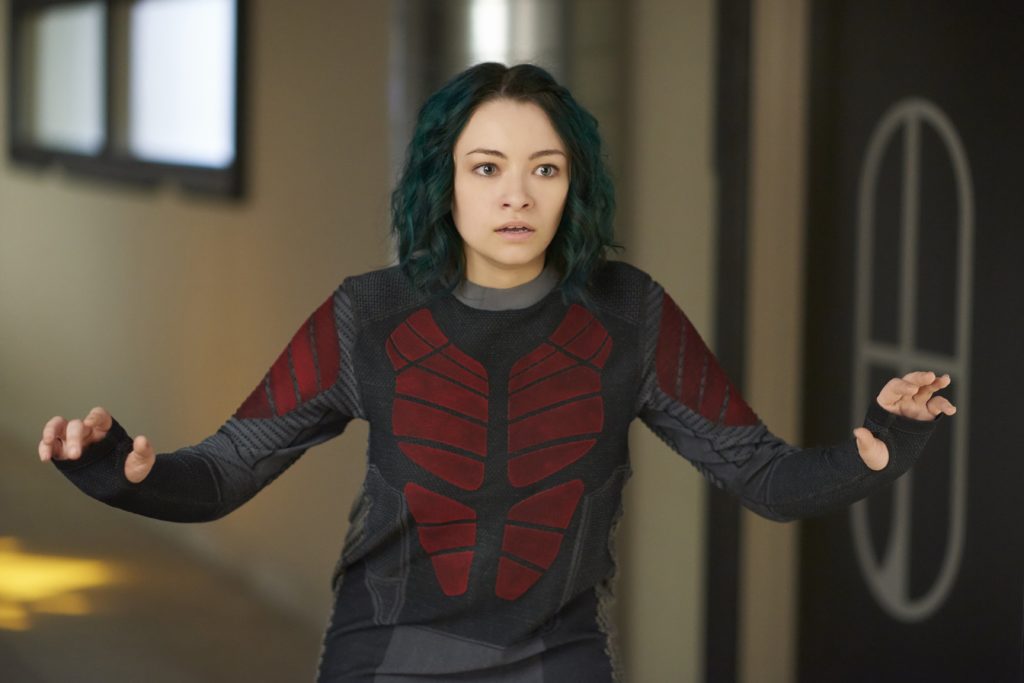 Five, being my baby badass, saves Three and Four by killing them and heading up to the roof. There, the Marauder picks her up in her adorably over-sized scientist coat with the blink drive adapter in hand. The Android does a bit of crafty work redirecting the shield’s power, allowing the group to woob woob woob escape right on out of there. Easy does it.

The crew decides to test out the shiny new blink drive technology and testing goes, shall we say, poorly. And it’s here that I have to make a quick plea to Dark Matter:

We’ve had our ups and downs like everyone else, but right now, I think we’re in a really good place. We’re stable with still some excitement churning in the old engines, eh? Our second year has been positively magical, if a bit on the sad side. But do me a favor, Dark Matter. If you love me (and I hope you love me like I love you), keep my boo Five safe. There have been a lot of close calls and I’m desperately afraid of something bad happening to her. She’s the only one that matters and if you hurt her, well, things won’t be so good between us.

Meanwhile, Nyx and Devon share a lot of screen time this episode. I’m surprised they didn’t bond more sooner, what with both being outcasts, essentially, on such a tight-knit crew. Nyx is still reeling from the loss of her brother (does she actually know if he’s dead?), so she goes to Devon for something to help deal with the pain and he hypocritically lectures her on not abusing drugs. YEA YEA POT. MEET KETTLE. Actually, I feel for Devon Charming. He’s clearly suffering and being on board the Raza is dredging up some painful memories for him.

In the hallway, drunk on booze and bad memories, Devon tells Nyx about a time when he got a girl killed because he was high as the ship’s doctor and couldn’t save her life. Outside the stasis chambers where the Raza crew lost their memories, Devon wishes that he could lose his memories because it would make the pain go away. Nyx responds:

“You know, as soon as they came out of those pods, they went looking for their past. From the sound of it, it wasn’t too pretty. Now they’ve got no choice but to deal with it. So, I guess we’re all in the same boat.”

Have I mentioned that I love Nyx? Because I love her. She’s not quite as harsh as Two, but doesn’t hold back on the truth, either. And yet, she’s unafraid to display emotion. There’s a kindness to her that I adore. Last episode she felt as though she had failed her brother, giving him false hope of a future together. This week it seems like events are replaying themselves in the form of Devon, so when she sees him leave the ship to get some alone, she jumps at the chance to keep an eye on him.

Unfortunately for Nyx, the Seers find Devon before she has a chance to save him. They question about the Raza’s whereabouts and Devon is believably aloof, even claiming that Nyx is “One of them now”. Finding his information useless, the Seers stab Nyx in the gut, panning out just long enough to leave his fate ambiguous.

What a tease, Dark Matter.

I love the action-filled episodes of Dark Matter, but all these deaths and near-misses are taking a toll on me. I’d like at least one episode or part of an episode that is a bit more upbeat, one where we can really see what the crew of the Raza does in their downtime. It was something Firefly handled so well and I think that Dark Matter is more than capable of giving us even a few glimpses of light, which would go a long way toward giving the viewers some much-needed development for the characters.

Calchek, while “annoyingly persistent”, is a bit of a jerk toward the Android. He judges her for the upgrade and the Android gets unusually defensive about it. If I had to guess, I’d say that she’s becoming much more human than she intended when she initially installed the tech. With her lingering gaze on Three and the anger toward Calchek, I’m wondering if my thoughts last week on a betrayal might actually come true. Also there’s that shot of her in a bed somewhere in the middle of nowhere and my IMMEDIATE thought was it was a bed she dreamed of sharing with Three.

Also, did the Android dye her hair? Am I just now noticing this change?

Five is the tits. Not even joking. Not only is she the glue that holds the crew together but she single-handedly gave them the greatest power in the galaxy. I’m constantly astounded by her quick wit and ability to survive any situation.