‘Dark Matter’ Review: “We Should Have Seen This Coming”

This week on ‘Dark Matter’: Two is pissed she might be predictable, we finally learn more about Nyx’s background, and Five is a human lie-detector.

Spoilers through Dark Matter 206: “We Should Have Seen This Coming”

Since the moment she was introduced, I have been pining for more Nyx screen time, and last night, the Dark Matter gods granted my wish. From a narrative perspective, I’m grateful that we didn’t get an origin story right away because we got to learn more about Nyx in pieces instead of slapping the biography of her life down on the table all at once. Dark Matter makes liberal use of flashbacks but it never feels like a gimmick or contrived. We see a snippet of the past, infer what happened, and immediately jump back to the future and the action.

After a discussion with Four (seriously these individual bonds are great), Nyx remembers her past and how she escaped captured from a group of dudes in creepy white uniforms who were experimenting on her. It’s a memory that haunts her but she’s tough and she moves on. Later, when Two mentions that they need to make some more money to take down Reynauld, the woman who wants Five’s card, Nyx mentions that she knows a freighter that carries a ton of Shadow, a black market drug that could earn them enough money to buy an island at the Bahamas. Three is all, “Fuck yea! A heist!” and Five stares down Nyx like she can just friggin’ SMELL the lies. I genuinely wonder if Five is that good a judge of character or if she has some internal lie detector because she sniffs out Devon’s bullshit later on, as well. 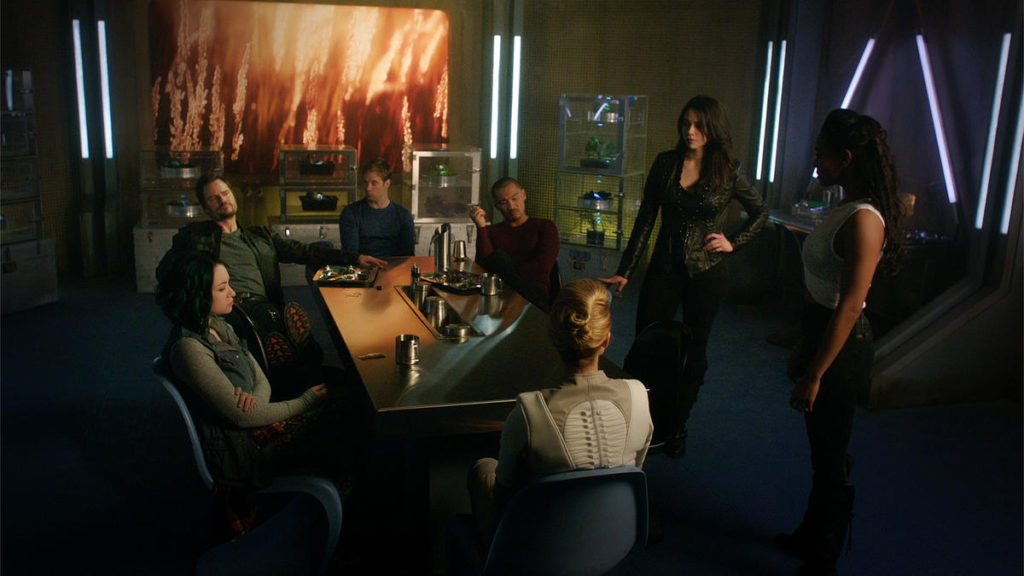 But Two and the crew decide that the plan is solid enough and hey, nothing EVER goes wrong with their plans, no one EVER lies for their own needs, so the heist went off without a hitch and then the episode ended with the crew rolling around waist-deep in credits.

Aaaaahhhhhtually, what had happened was, Three and Four got the goods while Two and Nyx found a definitely not PTSD-inducing corridor full of doped up humans in pods being used like computers. Two is mad at Nyx for like 10 seconds but Nyx is all, “He’s my brother!” and Two melts and they carry his intelligent ass back to the ship. Meanwhile, the Raza is getting its face and shields kicked in because no one on the bridge can move the steering wheel every so often to maybe avoid being hit. Seriously, why are you just sitting there! You’re going to have to burn all these hard-not-earned credits on repairing the shields! Android, I know you’re kind of human and all, but you’re still smarter than the rest! Come on! Don’t tell me that fancy new outfit has warped your mind. Thankfully the crew escapes, but they end up limping away from battle with their shields mostly depleted. Hooray.

Devon knows some cool kids who will buy the Shadow for a good price because of course his Prince Charming haircut does. He manages to swipe a box of the drug before they ship it off but Five, always lurking in the darkness around a corner, or in a vent shaft, catches him in the act and does not believe his “it’s for Nyx’s brother” lie one bit. Of course, Devon is acting suss as hell, so even Three would notice that pretty dude is lying through his teeth. However, Five doesn’t say anything about it and Devon takes a dose of the drug anyway.

Meanwhile, Nyx and her brother, Milo, explain the truth: they were prisoners on board a ship of Seers because their people have a higher amount of CPA (cognitive predictive ability). The Seers use Nyx’s people to analyze the data of the world and predict the future. To dull the pain of their day-to-day cubicle confinement, the Seers give them Shadow because they are kind and benevolent overlords who approve the use of the recreational drug. The rest of the crew nods at this revelation but they don’t truly understand it until they go to sell the Shadow to Devon’s buyer and the Seers crash the drug dealing party. Three and Six get stranded on the surface of a radiation-filled planet in the Marauder and the Raza jumps away because they have no shields BECAUSE NO ONE KNOWS ABOUT EVASIVE MANEUVERS.

Milo seems relatively upbeat for someone who’s coming down off a Shadow addiction (handling it much better than Devon Charming). He has a few alone moments with Four who asks about the war on his home planet. Milo says he could likely predict the outcome if given time to analyze the data but Four doesn’t press the issue further.

Two, however, corners Milo because she’s pissed anyone would think her actions are predictable. She puts a gun to his head in an attempt to threaten the Seers’ most valuable CPA (heh) but everyone in the world except Jace Corso knows she isn’t going to pull that trigger.

In the end, the group doesn’t actually come up with a plan to trick the Seers; they simply go back for Three and Six and agree to return half the Shadow and Milo along with it. Nyx isn’t a fan of the plan, but Milo, ever cool, tells her it’s for the best and that the crew of the Raza needs her because they are integral in the fight to come. Back on the freighter, Milo tries to disrupt the Seers’ plans but they’re onto him and Milo ends up taking his own life (with the help of Four’s knife) because that’s the best way for him to slow down the Seers.

On the bridge, Two’s hand spasms and we’re left to wonder until next week what the hell that even means.

While it may have been disappointing to some, I think the resolution to the Raza’s woes this episode was fantastic. It was another example that while we see the crew as our “heroes” they don’t always have clever ways to get out of problems. Sometimes they “lose.” Sometimes they have to cut their loses and move forward.

@theworkprint
Follow
Previous article‘Batman: The Telltale Series’ Review: I…Am…Bruce!
Next article‘Dark Matter’: Who Will Betray The Crew of the Raza?