Last week on Dark Matter we got a glimpse into the back story of Four, Five, and Six, and this week in “Episode Seven” Three takes the spotlight. I said before in my advanced review of the series that Dark Matter feels a bit like Firefly 2.0. That isn’t an insult to the series because goodness knows we all love a solid space opera, but this week’s episode with guest appearance by Ruby Rose, felt especially Firefly-like, with stowaway passengers in stasis and betrayal from the least expected party.

Life on the Raza has been focused mainly on learning the history of the six crew members with the help of the Android. Sure, there have been a few guest appearances here and there but nothing notable to take away screen time from the main cast. However, “Episode Seven” introduced not one, but two new characters in the entertainment android Wendy and Three’s sickly lover in stasis, Sarah, and boy, were they welcome additions.

With Five finally learning to control her abilities, harnessing the memories of the other crew members, she learns the password to open the door that has haunted Three for so long. After learning that Sarah resides inside the room in stasis because of a deteriorating disease, it makes sense now that even subconsciously he’d be willing to blow himself to bits in order to get inside. Sarah’s introduction does wonders for everyone’s perception of Three because up until now he’s been crude, disgruntled, and downright violent. I must admit that I prefer his relationship with Two over the prospect of her being with One (because he annoys me), but even without the relationship with Two or even Sarah, Three has grown on me the most of the characters. I have a soft spot for the bad boys who become protective of their own. Watching him grow to care about Five the way the others do has been a highlight for me. 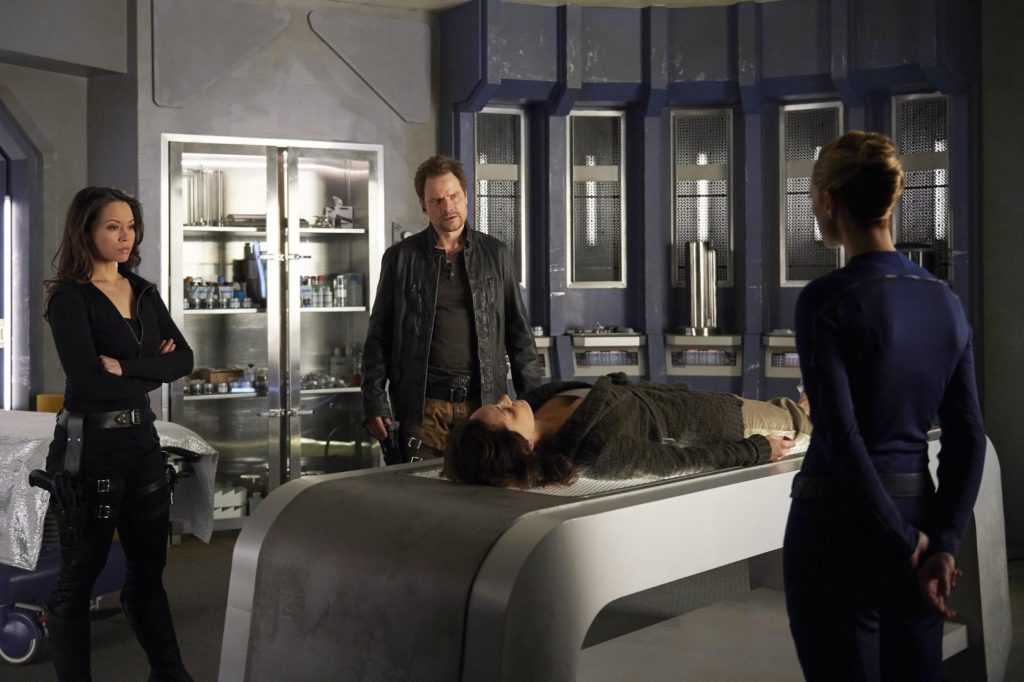 As sweet as Sarah’s reunion with Marcus (Three) was, the introduction of the entertainment android Wendy was about as bitter. I groaned watching One and Six ogle her abilities and then again when One let her teach him what it meant to “dunk the donut.” Don’t get me wrong, Ruby Rose played the part perfectly, with little head jerks and sharp arm movements to remind us that she was a computer program and not just a, well, prostitute. However, the Android’s jealousy was the best part of Wendy’s introduction, cycling through accents and listing off her own capabilities in an attempt to appeal to One and Six. It takes Five’s words of wisdom to get through to her to realize that Wendy is only the “new” thing and that they owe their lives to the naive but kind Android.

The episode culminates in a betrayal that maybe isn’t as shocking as I had you believe earlier, but like most of the problematic moments, the crew is split, forced to find a way around the issue, which they do in fairly easy fashion. If there’s one complaint I have about the show is that the issues faced by the crew never feel dire or tense to warrant any real concern. They solve the new problem of the week and then go about their day. That being said, I don’t expect, nor want, anything more dramatic from the show, as it keeps it closer to the light-hearted end of the spectrum. I don’t need every TV show I watch to be like Homeland or Game of Thrones each week. That’s exhausting. Besides, the end of “Episode Seven” was heartbreaking enough. I just hope that the emotion from Three’s loss carries through to later episodes.

TL;DR: One continues to be awkward around Two; Two proves again and again why she is the leader; Three is secretly a big softie and I love that; Four practices with sais; Five remains the best character on the with her lovable attitude and sweetness; Six eats some food; and the Android does a hell of a Jamaican accent.

Previous article
‘Killjoys’ Recap: One Blood
Next article
‘Scream’ recap: Come for the murder, stay for the sex tape