‘Dark Matter’ Advanced Review: Something To Fill That Firefly-Shaped Hole In Your Heart

*Slight spoilers for the first episode of Dark Matter, but nothing major*

Comparing Syfy’s Dark Matter to Firefly is high praise considering how strongly Browncoats adore the little show universally believed to have been cancelled about six seasons too soon. And it’s true that Dark Matter has big tight-pants to fill, and it doesn’t really do so in the first episode, but I’ll say this: I haven’t been this excited about a sci-fi TV show in a long time.

Based on the graphic novel of the same name (which was created from a pilot pitched to the network–talk about meta), Dark Matter follows six strangers and an android as they travel through space on a derelict ship trying to figure out who they are after having their memories and ship data stores wiped clean. Viewers follow these numbered nobodies, learning about the world as the characters do. According to showrunner Joseph Mallozzi, there is some authenticity to the way these characters interact, since the actors learned what was going on at the same time as their characters.

Melissa O’Neill (Two) says, “I loved that I didn’t know what was going to happen. Being a first time performer on television, I didn’t know what to expect. I thought that it was such a lovely thing to encounter that we were going through what our characters were going through at the same. We were discovering what was happening and how to interact with each other in the exact way our characters would be doing it. There’s a great bit of truth that’s happening on screen.” 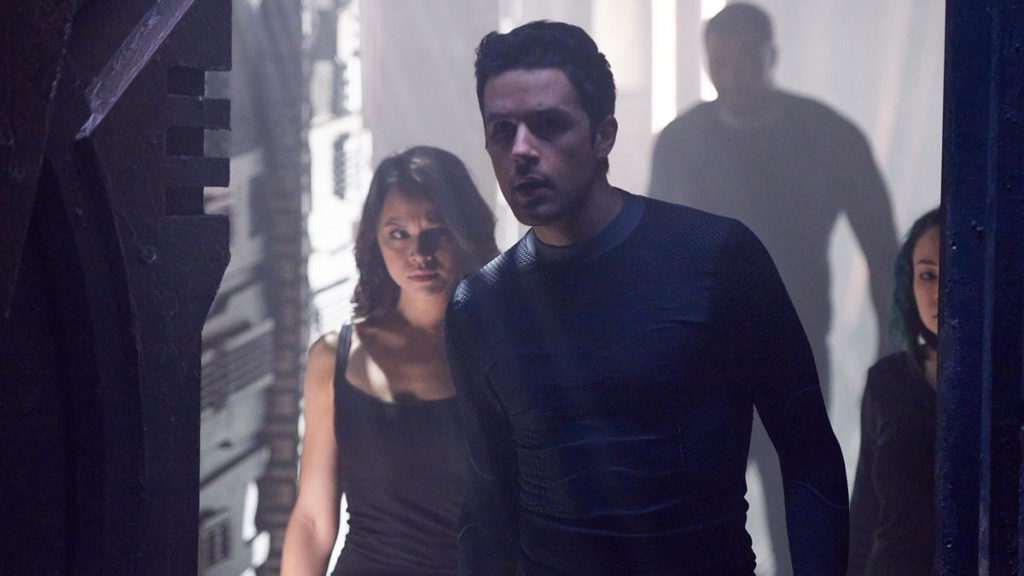 Thankfully, the first episode isn’t a complete blank slate of six boring characters who take several episodes to become fully fleshed out characters. Instead, each crew member has a distinct personality in place and it just becomes a matter of “unlocking” what’s hidden in their minds. Some do so more easily than others, but they all eventually fall into the typical science fiction roles: One has a good heart but is a bit of a pushover. Two takes on the leadership role and effortlessly restores the ship’s life support. Three likes big guns and explosives. Four picks up a pair of swords and instantly becomes a samurai. Five is quirky and can fix the ship’s wires and gadgets. Six…Six is just kind of around at the moment; he’s not as rash as Three, but not as kind as One either.

Of course, Dark Matter isn’t perfect. “Episode One” is still a pilot episode, which means it’s full of the plot set-up needed for later episodes and the slow build to learning about each character. The “amnesia” beginning does feel like a bit of a cop out, having the characters wake from cryo without any knowledge of their surroundings or how they got there. But this also kind of works for Dark Matter.

The ship’s interior and the planet were also fairly standard as far as science fiction goes. You aren’t going to come across insane alien races or high-tech gadgets, especially not in “Episode One.” But I like that Dark Matter is more grounded. It doesn’t try to be flashy with special effects, nor does it follow the Michael Bay Boom Boom Theory of Attracting Viewers. And that’s where my comparison to Firefly comes from–the show seems intent on focusing on the characters’ growth, which I much prefer over action sequences and new concepts for space.

Mallozzi describes the show as, “Sci-fi with cable sensibility, leaving viewers with a need to find out what happens next week. It’s a ship-based space opera that offers a lot of payoff, mystery, and humor; there’s a character for any audience member out there.” And I think that’s accurate. Naturally, I took an immediate liking to the straight-forward and sassy Two (and also found One to be quite annoying).

Dark Matter doesn’t bring anything new to science fiction, but it is an entertaining return to what fans love so much about the genre.