Dancing With the Stars Review: Len’s a Cup of Tea and Robert’s a Frisky Pony

So, a cup of tea, a cappuccino, and a frisky pony walk onto a dance floor…

Bergeron looks at all of them and says: “Oh! Just another typical Monday day at work for me!”

Okay, so it’s not the best joke I’ve ever written, but the phrases and weird things that are said on this show are beyond hilarious and random. It’s almost like Bergeron is hosting a circus, and he’s the man who has to keep all the crazy together. I think my favorite moment this week was when Bergeron called Bruno “creepy.” But more on that later.

This week on Dancing with the Stars, eight couples remained, and the first “Round 2” was put into place with the Team Dance. This is where the show starts creating ways to keep themselves on the air for 2 full hours, by cramming 900 dance routines into these poor people, and then leaving exactly 17 seconds for eliminations. I always hate that the person who JUST got sent home is rushed through their goodbyes, and this week’s elimination was particularly heartbreaking, I thought. Anyway, the show went with the theme of SPRING BREAK WEEK, and each couple was assigned a spring break-esque song to choreograph their dance to. Let’s get started. 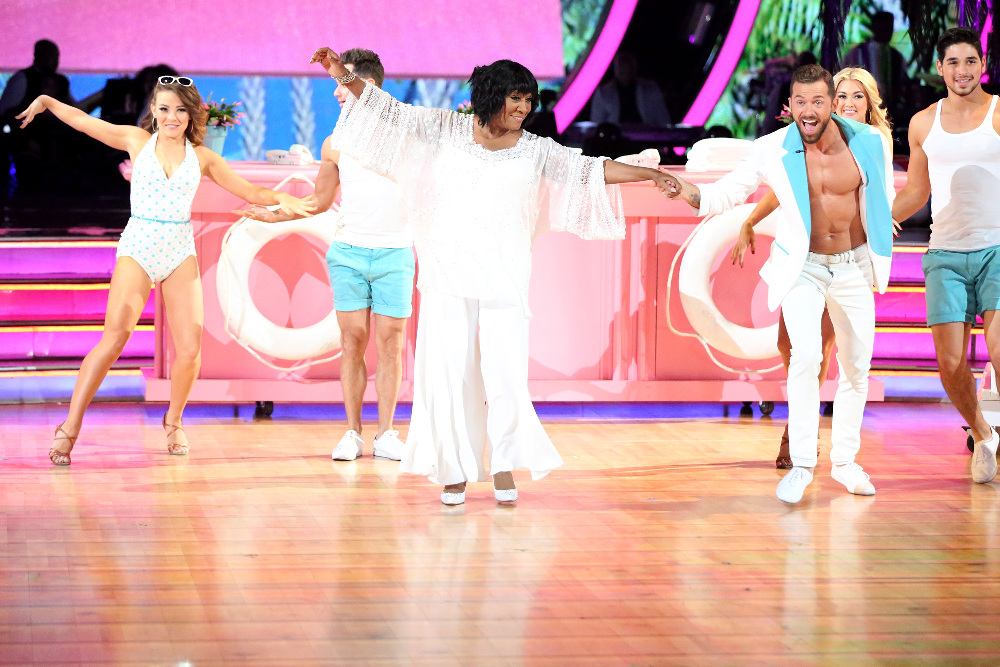 Patti / Artem:  They did the Quickstep, to “Heatwave”. During rehearsals, Artem tells cameras that this is Patti’s strongest week health-wise, that she is learning the steps wonderfully, and she is having a blast. So, of course, this means she is the one going home. Every single time they show someone saying how great they feel or how they are finally confident or something  like that, they end up being the one leaving. Their dance was great, and I’m still surprised from week to week at how well she moves on her feet. Len made a joke with: “best dance so far tonight!” Get it? (Because they were first.) Julianne, who had on the oddest mustard-colored Amish-looking top and strange eyebrows and pink hair, complimented Artem for his choreography and working with Patti’s strengths. Carrie Ann is still talking I think, and it’s now Wednesday. That chick doesn’t stop talking, ever . Scores were 8/7/7/7. 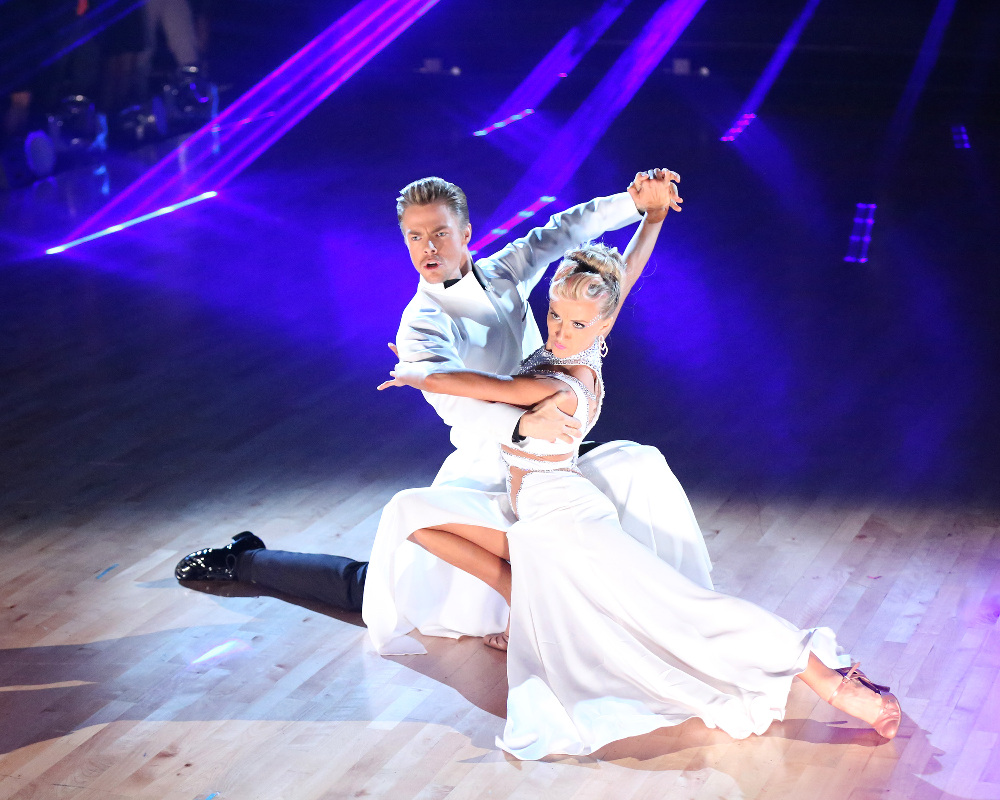 Nastia / Derek:  They did the Tango to the song, “Stubborn.” I loved it and thought it was a blast to watch, as they always are. It was so fast! Bruno said “That’s how you attack the tango!” Julianne wasn’t feeling their connection on the dance floor, and Len screamed something weird and then got booed, to which he replied to the audience: “Oh, shut up!” Scores were 9/8/8/9. 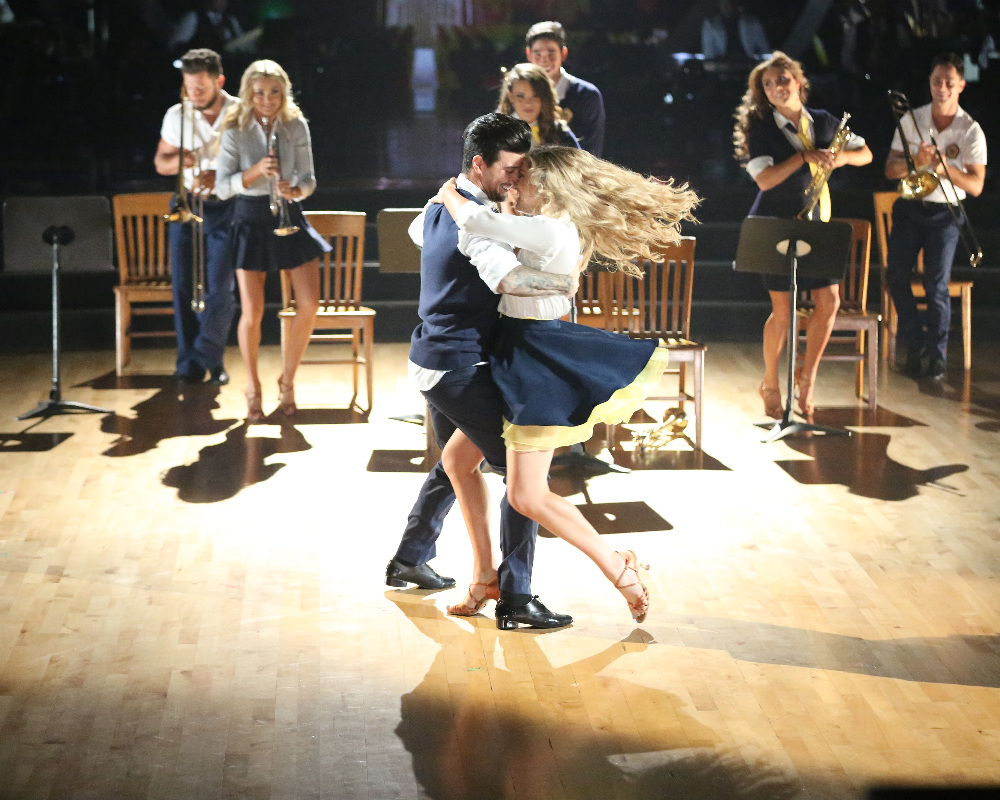 Willow / Mark: Because Willow was having pain in her ribs, they decided to get her checked out weeks ago. The results came back, and it turns out she didn’t break her ribs, but she has EXTRA RIBS! What?? Yes, that was the diagnosis. Weirdest thing ever. She thought so too, and was laughing about it, as was Mark, asking her on their break if she wanted to go out and eat some ribs. They danced the Salsa, and I absolutely loved it, and also loved her costume. She is one of my favorite people to watch. Bruno said they always give it 100%, and Julianne said something I couldn’t focus on because of those caterpillar eyebrows crawling down her face. Scores were 9/8/8/9. 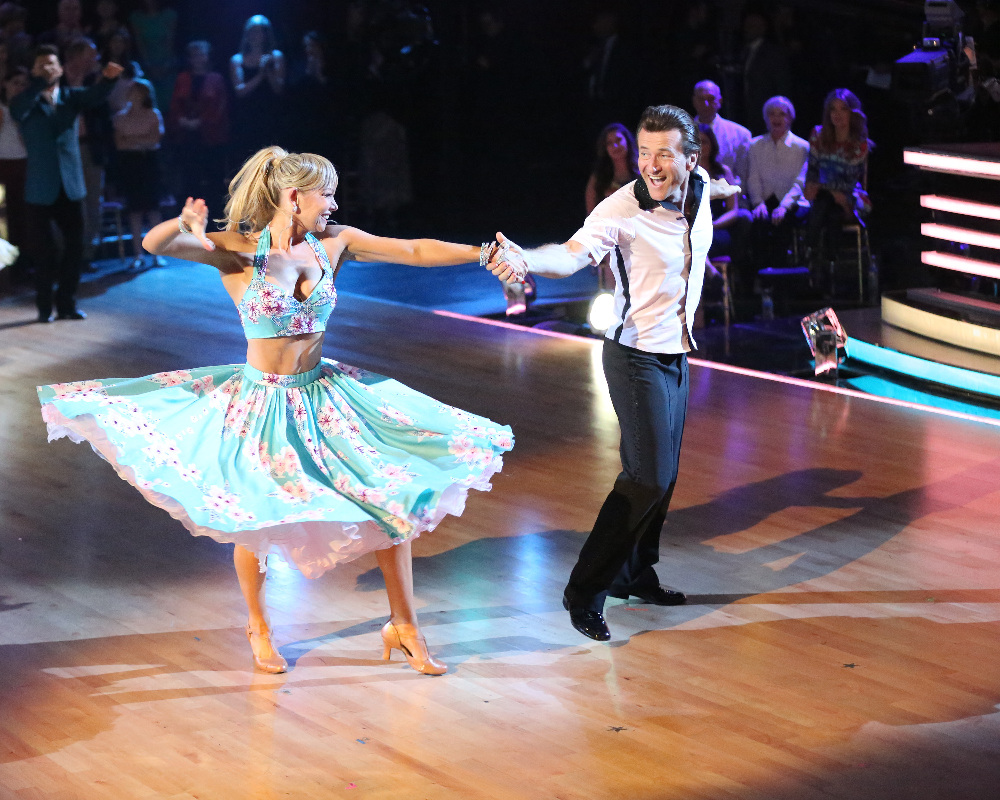 Robert / Kym:  In their rehearsal package, both pretty much admitted to something going on between them, saying they have a “special connection” and that “this won’t be the end” of their relationship. They danced The Jive to The Beach Boys, and it was a very cute 1950’s sort of dance. Len said he felt the “good vibrations on this one!” Oh, you’re on a roll tonight, Len! Make sure you catch him at Yuk Yuk’s Comedy Club in Pasadena, CA. Bruno called Robert a “frisky pony.” Yeah. I don’t know what that means either. Nobody does. Backstage, Erin Andrews asked them when are they finally going to make out, and tried to make it happen “live”, but it was a no-go. Scores were 7/7/7/7. 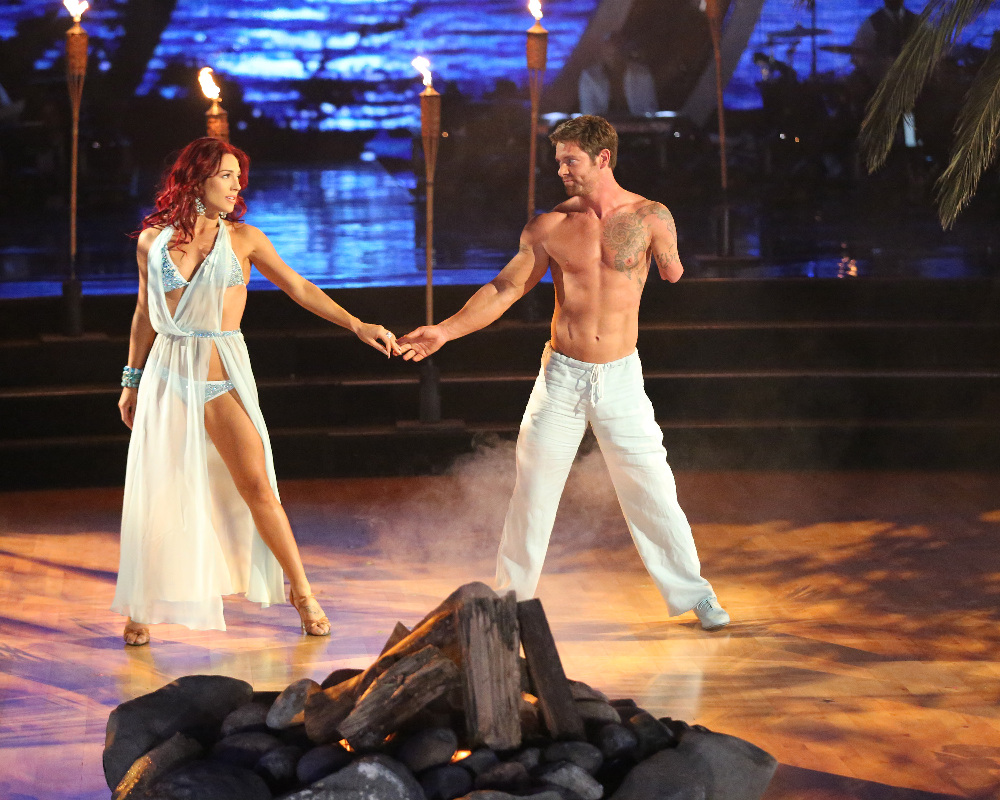 Noah / Sharna: Their rehearsal package showed them arguing and a bit of tension about how Noah is always interrupting Sharna when she talks, and how they were both feeling a tiny bit disrespected. It was no big deal, and they worked it out and hugged in the end of the package, but the fact that the show chose THAT five minutes of an entire week of rehearsals to show to America made Noah upset after their dance. He didn’t like that it made Sharna look bad. He is such a sweetheart. They danced the Rumba, which was tough for him due to the extreme slowness of the movements. Bruno found it intuitive and magnetic, and Erin Andrews pointed out backstage that their tension is nothing compared to other past pro dancers. “Have you ever met Max?” she joked. Scores were 7/7/7/8. 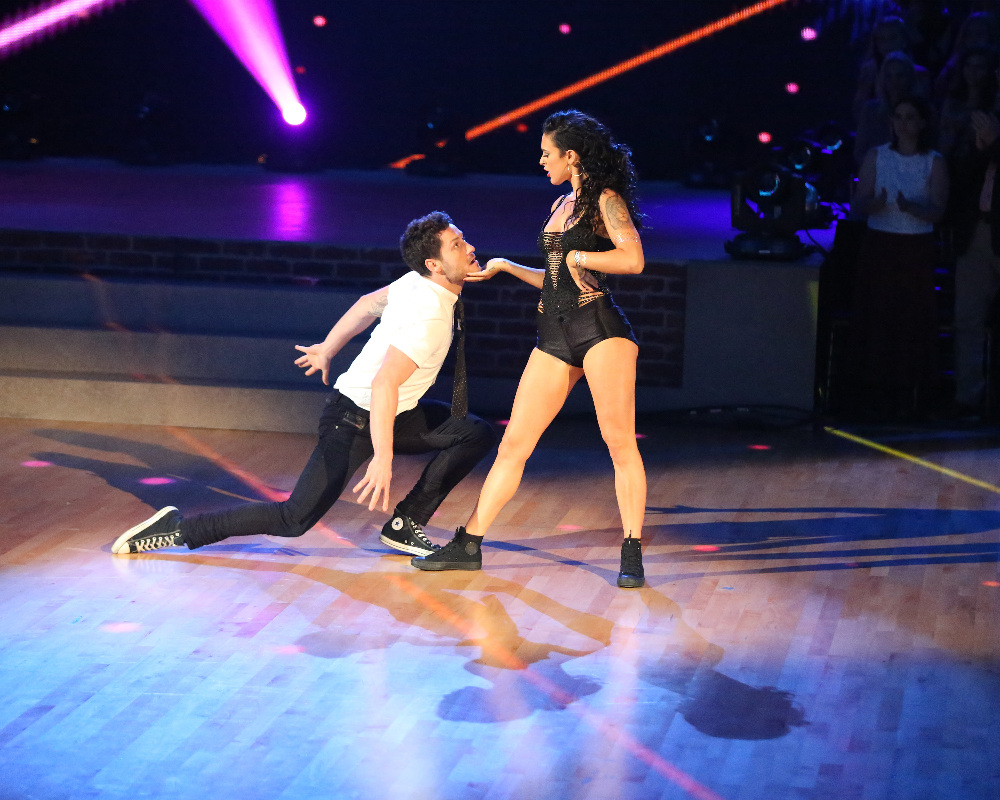 Rumer / Val: They did a Jazz routine to “Bootylicious”, which was very provocative. I thought it was great, and to me, Rumer has never resembled a young Demi Moore MORE than in this dance routine. She looked just like her mom, and she looked radiant. Julianne was “underwhelmed, lots of walking around.” Boo to that comment. Bruno disagreed and found it “HOT!! I like it hot and raunchy!” I’ll bet you do. Carrie Ann also “felt disappointed” – not in the dance, but in her horrible lack of sex life. Len said: “Listen – I’m a cup of tea in a world of cappuccinos. It’s the ballroom, not the bedroom.” Okay then. Backstage, Val explained that they were GIVEN the song “Bootylicious”, it wasn’t their choice, so of course their number is going to be more provocative than the others with that song. Scores were 8/8/7/9. 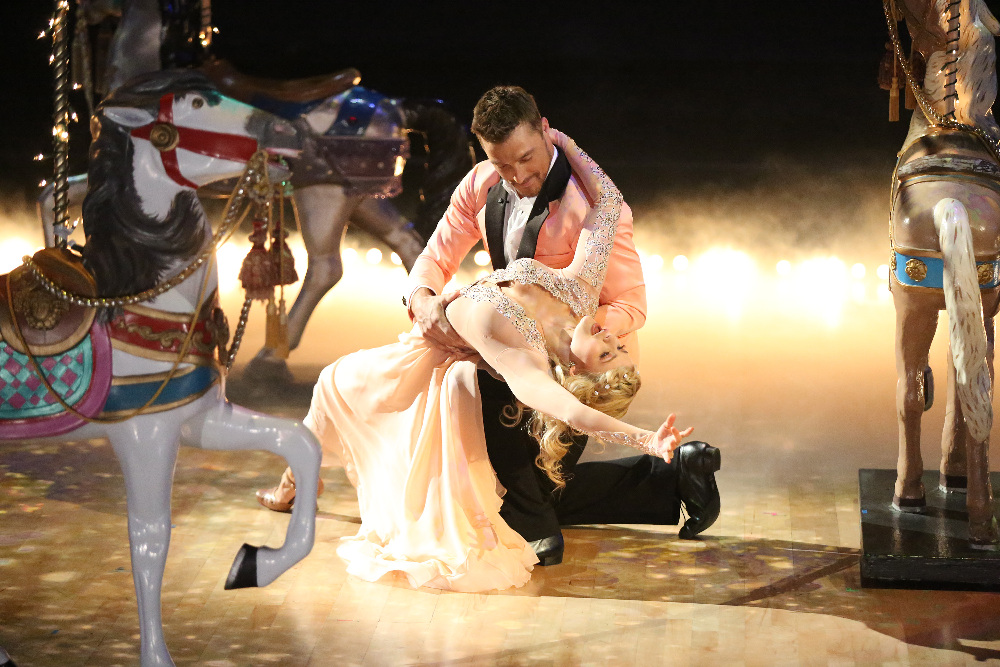 Farmer Dull / Witney: Ugh, why is this dullard still there? And of course, this week he improves dramatically, or at least, according to the judges. They did the Vietnamese Waltz to “Hopelessly Devoted to You”. In their rehearsal package, Witney said to camera in response to Julianne saying last week that Chris has no musicality, that “people forget he is a farmer and not a dancer.” Um, nope. Nobody forgot. They worked on timing and clapping during the week, and she literally had him clapping to the music like a 5-year-old and explaining basic counts to him . It was kind of funny. I will say his dancing was much better this week, but he still has that look of blankness on his face, like he is made of cardboard. Bruno said something about Chris “spinning like a wheel of joy!” Julianne told Chris to “get over here and shake my hand!”, to which Bruno hilariously said, “Would you shake my hand too?” and pulled Chris close to him in a forced embrace. Bruce has SUCH a crush on farmer boy. Scores were 8/7/8/8. 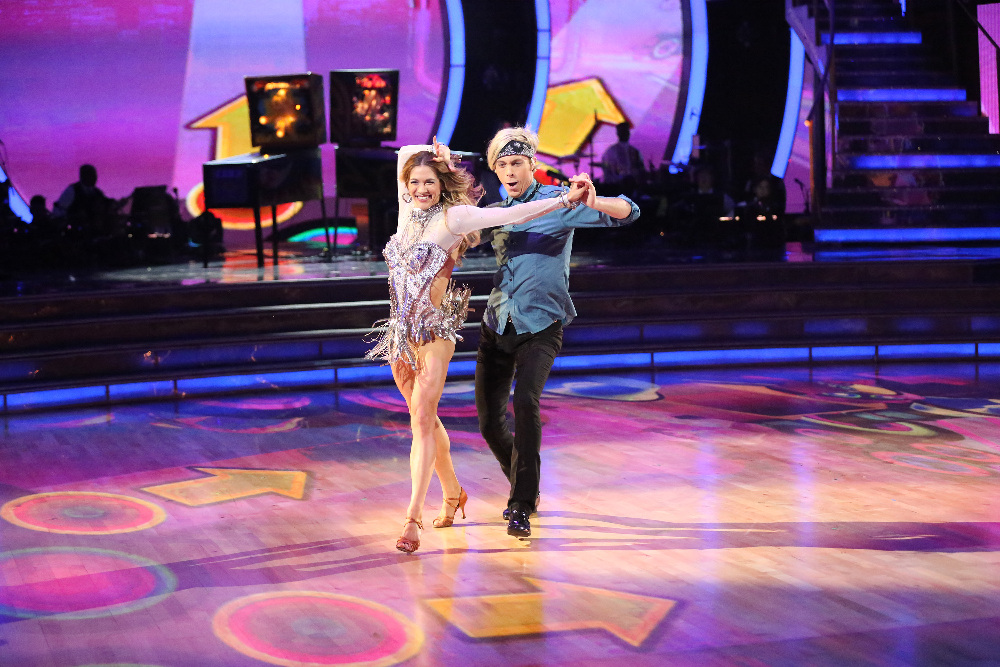 Riker / Allison: They were worried all week because he was away with gigs for whatever crappy band he is in that I’ve never heard of, and they didn’t like the song they were given and wanted a new one. It all worked out in the end, of course, and all the judges loved and adored their dance. I don’t know what it is, I just can’t get into this dude. Scores were high at 10/8/9/10. More tens for them, which put them at the highest on the leader-board at end of the night. 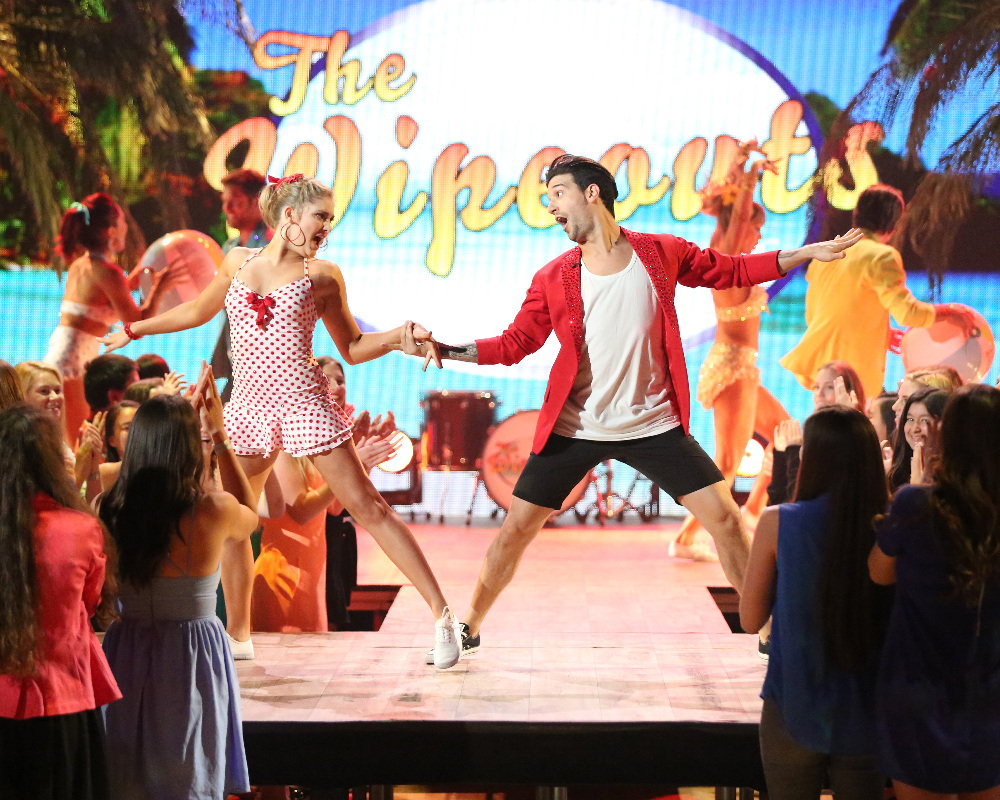 TEAM DANCE: The pairs chose captains and team names, and split into two competing groups for the team dance. The theme was spring break, and they were each given a more specific scenario, or they created it, I forget which. Of course, in the end, their scores were exactly the same by the judges, which means they mean absolutely nothing when it comes to who goes home. Team Yolo did “Wipeout” , which was a super fun dance including cartwheels, lifts, beach balls, bikinis, and boards. Each pair had their moment, and the dance was super fun. Scores were 10/9/10/10. Team Trouble had Patti as a strict high school teacher and the bell has just rung for summer time to begin. Each pair had a creative and clever moment, and their dance was super fun also. Same scores of 10/9/10/10.

Most awkward / funniest moment of the night: After the first team performed, Bruno and Tom had this hilarious exchange:

Bruno: That was great, and Willow – you are HOT! Very, very hot!

(Because, ya know, Willow is FOURTEEN.) That made me laugh. Hard. Tom’s delivery was perfection.

And then it was all fun and games until Patti LaBelle was sent home. Not cool. I really love her and she did so great on the show and REALLY got into the spirit of what the show is about. Her attitude was awesome, and she is good! Her parting words , which were rushed because there was only .04 seconds left in the show, were thanking the audience, judges, and Artem, and saying “I’m just honored to be here, and I have learned so much about myself, and learned that I can take direction, and I have this friendship with Artem now, and I’m just happy.”

NEXT WEEK: Bruno gets even creepier. Len refers to himself as another beverage. Farmer Boy learns how to clap do his Do-Re-Mi’s.

@theworkprint
Follow
Previous article
‘Mortal Kombat X’ Review: The Next Generation
Next article
Robert Downey Jr. walks out of interview; what the hell is wrong with Krishnan Guru-Murthy? (video)