Robert Downey Jr. walks out of interview; what the hell is wrong with Krishnan Guru-Murthy? (video)

Krishnan Guru-Murthy has made a living out of being controversial.

The acclaimed journalist from the UK’s Channel 4 has actually had his interviews used as evidence in a court of law — and he’s been the recipient of some top honors.

He’s also on a streak for pissing off at least one American entertainer on an annual basis.

In an interview with Avengers star, Robert Downey Jr., Guru-Murthy starts with the usual film promotion softballs (“What’s it like being Iron Man?”; “Have you always liked comics?”; etc.) — but takes an abrupt left turn.

First, he starts off by asking Downey Jr. about a 2008 interview he gave to the New York Times following his prison stint and his subsequent victory over substance abuse. At the time, Downey Jr. had told reporter David Carr:

“I have a really interesting political point of view, and it’s not always something I say too loud at dinner tables here, but you can’t go from a $2,000-a-night suite at La Mirage to a penitentiary and really understand it and come out a liberal. You can’t. I wouldn’t wish that experience on anyone else, but it was very, very, very educational for me and has informed my proclivities and politics every since.”

When Guru-Murthy brought up the quote (cutting out a good chunk of it, erasing all context), Downey Jr.’s face said it all: “Ok. I’m confused. Where are we going? Better smile. REALLY: WHAT THE FUCK?” He looked visibly annoyed and slightly agitated, looking across the room at somebody (most likely his agent or publicist) and you could hear murmuring, off-camera, about the line of questioning. 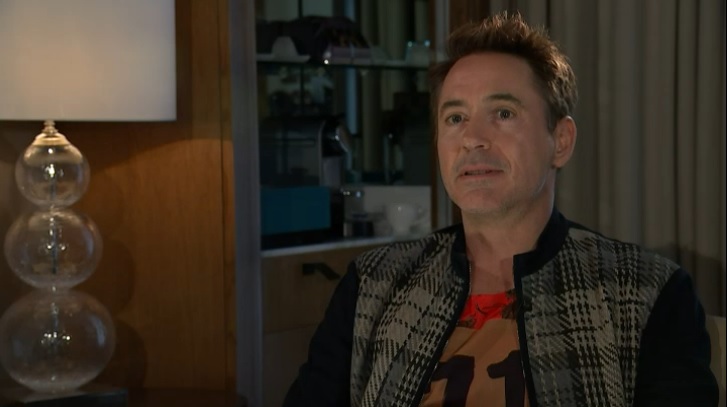 At first, Downey Jr. played ball, thanking Guru-Murthy for his “point of view”, and attempted to answer the question, saying “Things you said five to seven years ago…made sense to you at the time. I could pick that apart for two hours and be no closer to the truth than giving you some half-assed answer right now. I couldn’t even tell you what a ‘Liberal’ is.”

At that point, Guru-Murthy should have taken the proverbial “exit ramp”.

Instead, he doubled down, asking, “Are you saying that you came out of prison, not a Liberal?”

Downey Jr. became flustered, asking if they were promoting a movie but, despite his exasperation, he did his level best to answer a question that was both seven years too late and had nothing to do with the film: “I’m not going to backpedal…I’m also not going to [state my political preference]…I had an opinion [at the time] and, that’s the nice thing about opinions: they change and flow.”

Once again, Guru-Murthy pressed his luck. Smugly (and I get that assessment from the picture below), he declared that they were doing a promotional interview — but that the interview was also “about [Robert Downey Jr.].” 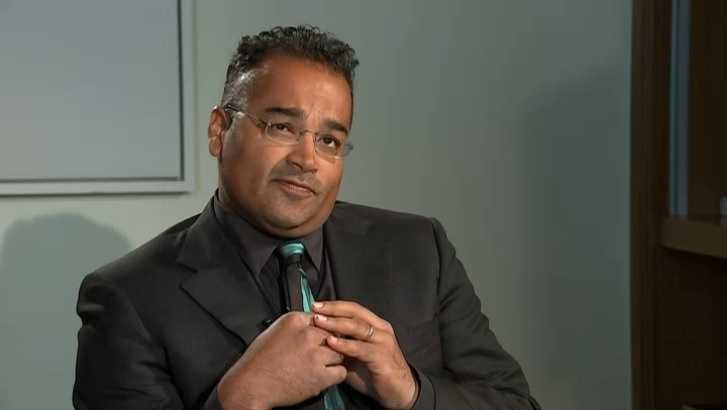 This was where Downey Jr. began looking for an exit ramp of his own. Trying to be kind, and attempting to push the interview back on track, he assured Guru-Murthy that he had “as much time as anyone else” to ask his questions — yet, he was visibly unhappy, looking, off-camera, for some sort of wrangler. 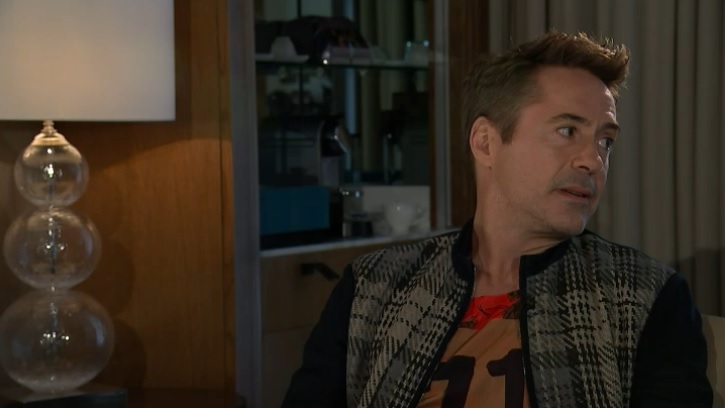 At this point, somebody warns Guru-Murthy that there isn’t much time left. Guru-Murthy tells that person, “We have about 3 or 4 minutes.”

If looks could kill, Downey Jr. could have mowed down a whole field of trained soldiers. He glares at Guru-Murthy and, with an ice-cold tone, sternly tells him, “Your foot’s starting to jump a little; you better get to your next question.”

You can see him lightly shove the Channel 4 interviewer as he passes by, removing his mic and giving it to a nearby producer. Guru-Murthy finally attempts an apology, to which Downey Jr. replies, “You seem OK, but it’s getting a bit ‘Diane Sawyer’ in here.”

The interview is below.

This isn’t the first time Guru-Murthy has walked down the wrong path during a promotional interview.

In 2013, Guru-Murthy interviewed Quentin Tarantino (during the press junket for Django Unchained) and asked him why he “made violent movies”. It was a fair question, one would suppose — and one that Tarantino answered honestly, stating that “Judd Apatow doesn’t get asked why he makes comedies.” Guru-Murthy didn’t get it then, either, further insinuating that violent films had a bearing on “real life” and asked Tarantino if he agreed with that. Tarantino became irritated and told Guru-Murthy that he had been making movies for over 20 years and he had been asked this question several times over the course of his career. When Guru-Murthy pressed further, Tarantino told the interview that people could “Google him” to find the answer.

Not satisfied, and on some sort of weird moral kick, Guru-Murthy went after Django cast member, Samuel L. Jackson, a few months later, challenging him to find some sort of “correlation” between on-screen violence and real-life violence. To his credit, Jackson kept his cool, smiling through the question and telling Guru-Murthy that responsible parenting and supervision were what prevented impressionable kids from repeating what they watch on TV and in movies. Guru-Murthy struggled to regain some sort of ground and took a shot in the dark, saying that “somebody” would find a “correlation” if Jackson could not. Jackson shut him down immediately: “Of course they will! That’s what they’re PAID TO DO.”

And, just last year, Guru-Murthy outright accused Pharrell Williams of supporting misogyny and violence against women with “Blurred Lines”. Williams wasn’t pleased, but calmly took the time to explain that the song lyrics and the video weren’t meant to be construed as an attack on women. He stated that even “good women have bad thoughts” and that the hypothetical “woman in the song” was taking that attitude to the dance floor. The “controversy”, Pharrell reasoned, was quite overblown. Not satisfied, Guru-Murthy started to attack the video, saying that naked woman were there to “please him”. Pharrell looked hurt and asked Guru-Murthy if he touched any of the women in the video or made any sexual advances toward them. Murthy could only come back with “They were naked.” Williams explained that the video was created by a woman and that the design was supposed to be inspired by European fashion magazines.

All journalists make mistakes. I’m not here to slander Krishnan Guru-Murthy. He’s a good journalist and interviewer — when he applies himself to the right subjects. There’s a time and place to assume control of the bully pulpit and have at your subject.

For instance, his interview with A4E’s Emma Harrison is a thing of absolute beauty:

When it comes to promotional interviews, they’re a cakewalk. They’re the literal equivalent of “shooting fish in a barrel”. You ask silly, stupid questions and you get an answer for your target audience.

To be fair, a lot of celebrities are aloof. Many have lost touch with reality and even done dumb things that they’ve never been put on trial for or even answered for. I can excuse Guru-Murthy for trying to get the best of Quentin Tarantino. In the past, Tarantino has proven to be obnoxious and arrogant. Williams is also part of the patriarchy, whether he likes to admit it or not.

Downey Jr. isn’t one of those people.

He’s served his time and he’s gone through hell, finding personal salvation by confronting and conquering his demons. Using promotional time to ask personal questions about his or anybody’s ancient past, no matter how “over it” you think that might be (especially when it’s been addressed several times by the subject, years prior) is horribly shrewd, careless and tacky.

I’m used to seeing that sort of thing from Fox News and the UK’s tabloids.

Journalism is a lost art. Being a brave journalist isn’t about attacking people and re-opening wounds that have already been sewn up and mostly healed.

Guru-Murthy, however, doesn’t seem to realize this and attacks any subject he sees. As such, his tactics come across as Bush League. His deplorable need to apply some sort of moral agenda to simple entertainment, turning fun, informative pieces into needless, bludgeoning hit pieces shows us the worst of modern journalism and I fear what’s to come if this is the track it continues to ride.

Previous article
Dancing With the Stars Review: Len’s a Cup of Tea and Robert’s a Frisky Pony
Next article
Johnny Depp is Chilling in ‘Black Mass’ Trailer