‘Dancing With the Stars’ Review: Week Two is ‘Erect’ with Emotion

It is Week 2 of our favorite Mirror Ball Trophy cheese-fest party, and Dancing With the Stars is already in emotional overdrive. Normally, the sobbing and inspiring storylines and incredible dancing don’t kick into gear until at LEAST week 3 – but not this season. They aren’t foolin’ around. This week was called “My Jam Monday”, and each star chose their favorite song, or “jam”, as the kids call it, to dance to. It was also the first week where someone was eliminated. Let’s not waste any more time. Old man judge Len has to be tucked into bed with his warm milk and blankie by 10 … 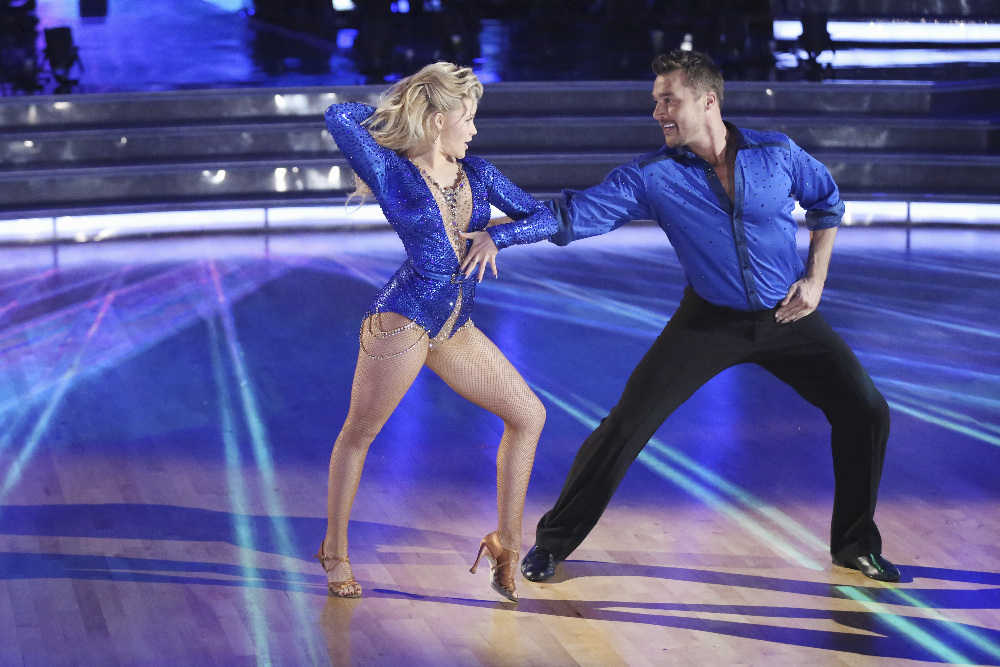 Farmer Dull / Witney:  NOTE: Witney, the dancer, is not to be confused with Whitney, the fiance of bachelor Chris Soules. And while we’re at it, please don’t confuse Chris Soules with a loaf of bread or paper towels, because his personality is similar to both. (Here comes more hate mail …… ) These two did the Cha-cha to a song by Pitbull, which is apparently what this farmer listens to. Pitbull? Really? I think someone else picked out this tune for him, because he probably chose something really boring and the producers said “No, dude. That song sucks. Let’s go with Pitbull.” 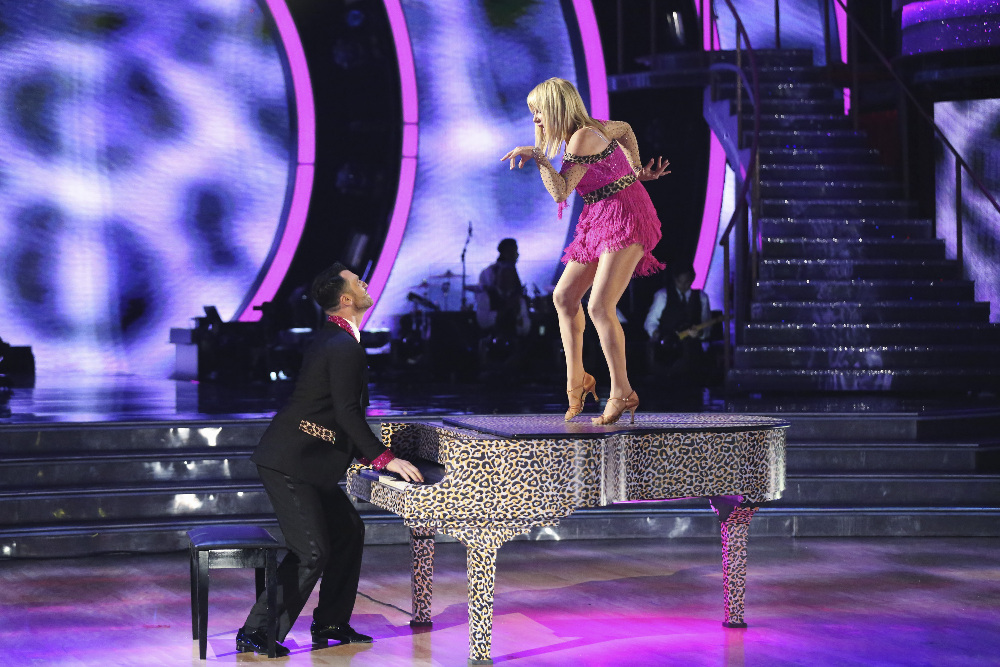 Suzanne / Tony:  Their Jive was to “Whole Lotta Shakin'”, and it was really well-done. Tony said he wanted the audience to “forget that Suzanne is 68 yrs old.” We might be able to do that if you all don’t keep reminding us every two seconds that she is 68. That being said, she has amazing legs and moves extremely well for … well … 68. The routine began with Suzanne on top of a piano, and only got better from there, with lots of shaking of body parts and fun. Julianne called it “awesome.” Bruno creepily said “you were all pert and alert!” Len thought it had “energy and verve.” Really, Len? Verve? Who says verve? Scores were 7/7/7/7. 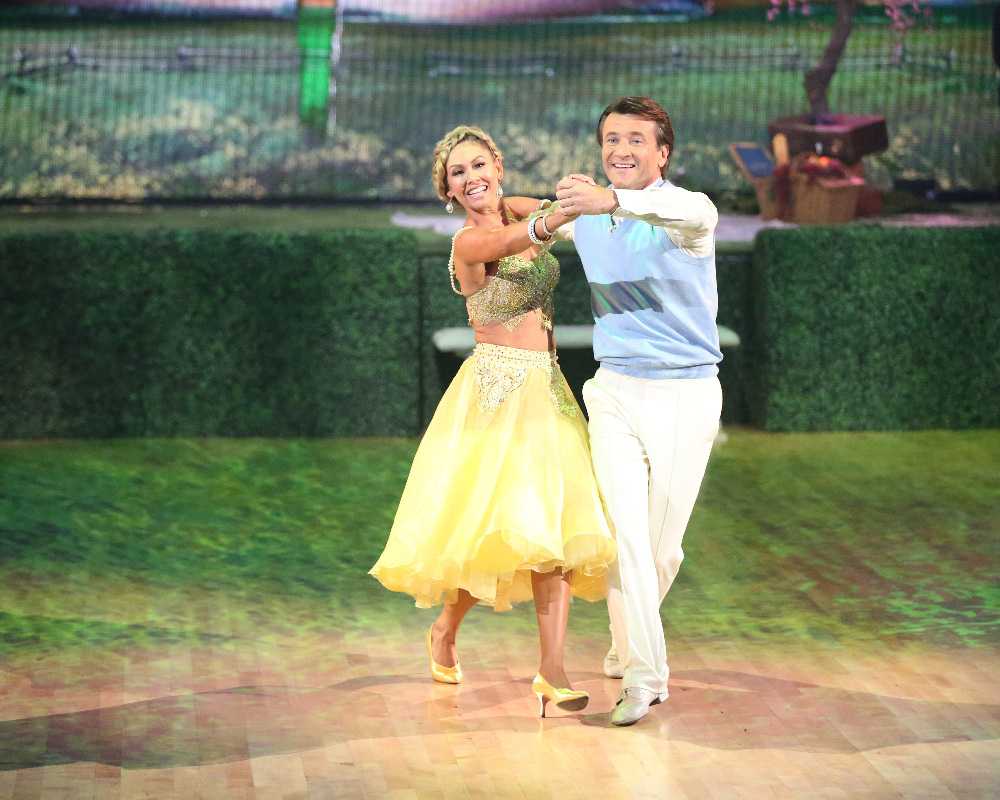 Robert / Kym:  Well its only Week 2, and I think I’ve had enough of all the shark references when it comes to this guy. Besides, he is so goofy. He never stops smiling, ever. I hope he doesn’t have to ever do a tragic or sad dance, because he will be smiling creepily the whole way through it. He reminds me of Guy Smiley from Sesame Street. Their Foxtrot to a Michael Buble song was well-done, and Buble himself showed up via satellite to wish them well. Len said the dance had “style and panache.” Panache? What is it with these terms? Scores were a familiar 7/7/7/7. 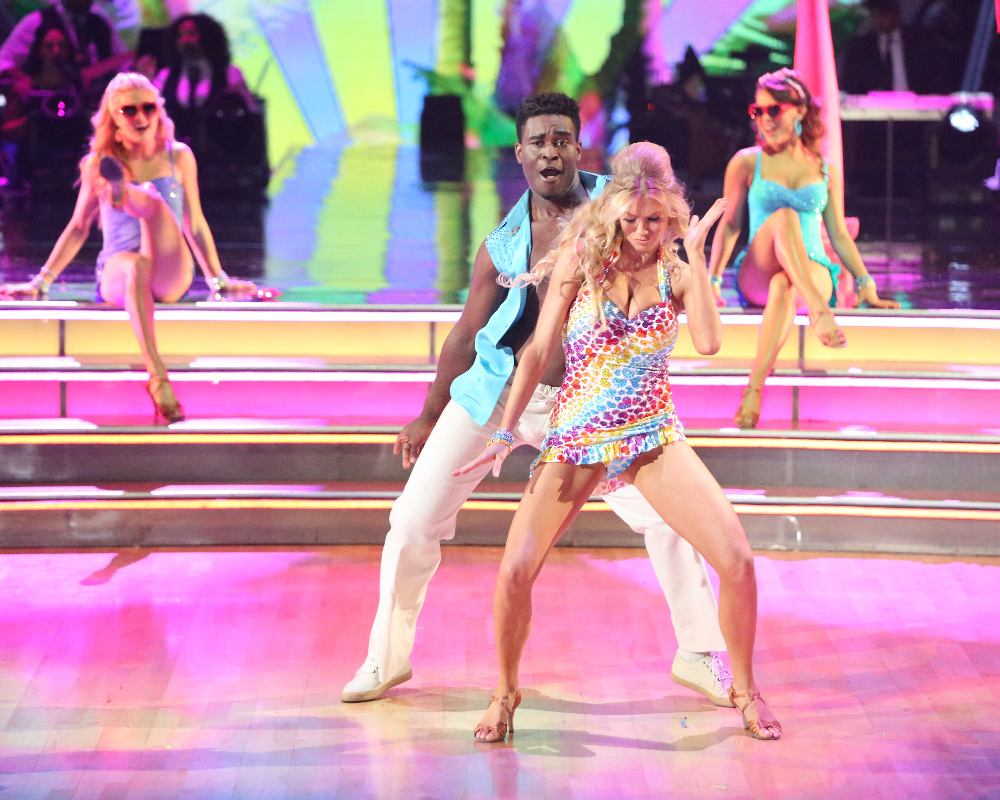 Charlotte / Keo :  Am I a horrible person for not remembering who this person is or why she is famous? I think she is a model, but all I can recall is “Boobs McGee” in my mind. In any case, she was upset about lots of mean and nasty comments on Twitter about her, calling her stupid and a bad influence on young girls. That sucks, that people would write such cruel things. Yes, I lightly mock this show and some of the people on it, but it is not ever mean-spirited. It is all in good fun, and even Tom Bergeron approves, as he has shared my reviews on his Twitter page multiple times now. (Thank you so much, Tom!!! You are truly the best.) But to go on someone’s Twitter page and bully them and insult them is just rude and hurtful. They had a great comeback to it with their well-danced Cha-cha that was surfer-themed. Horny Carrie Ann shouted “You really gave it to me!” Gave WHAT to you? Calm down, lady. Backstage, Erin Andrews sympathized with the social media insults hurting, telling Charlotte “they come after my nose all the time.”  Scores were 7/6/7/6. 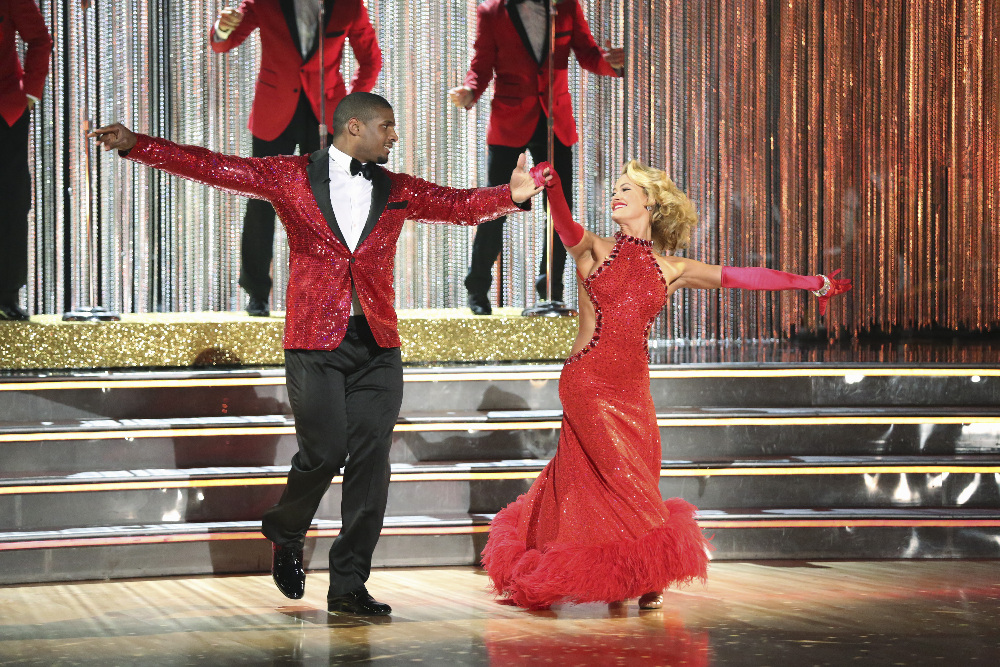 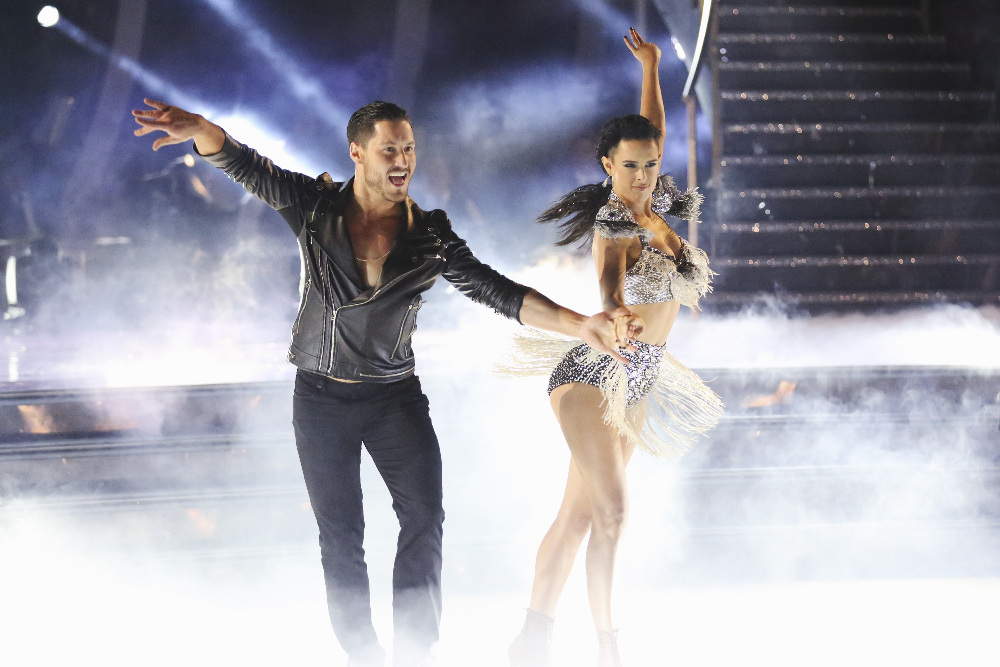 Rumer / Val:  They did the Cha-cha to Adele’s “Rumor Has It”, because .. well … Rumor. …. Rumer …. get it? Good. Val told Rumer that he was intimidated by her dad last week (Bruce Willis) sitting in the audience with his stone-cold face that never changed expression. Backstage, Erin and the pair all imitated the Bruce face together, which was very funny. In the ballroom, their dance was excellent once again. There was a LOT of fog coming out of that fog machine though, so it was hard to even see in the beginning. But this girl is talented! Julianne called her a powerhouse, while Len proclaimed “You can dance!” High scores were at 8/8/8/8. 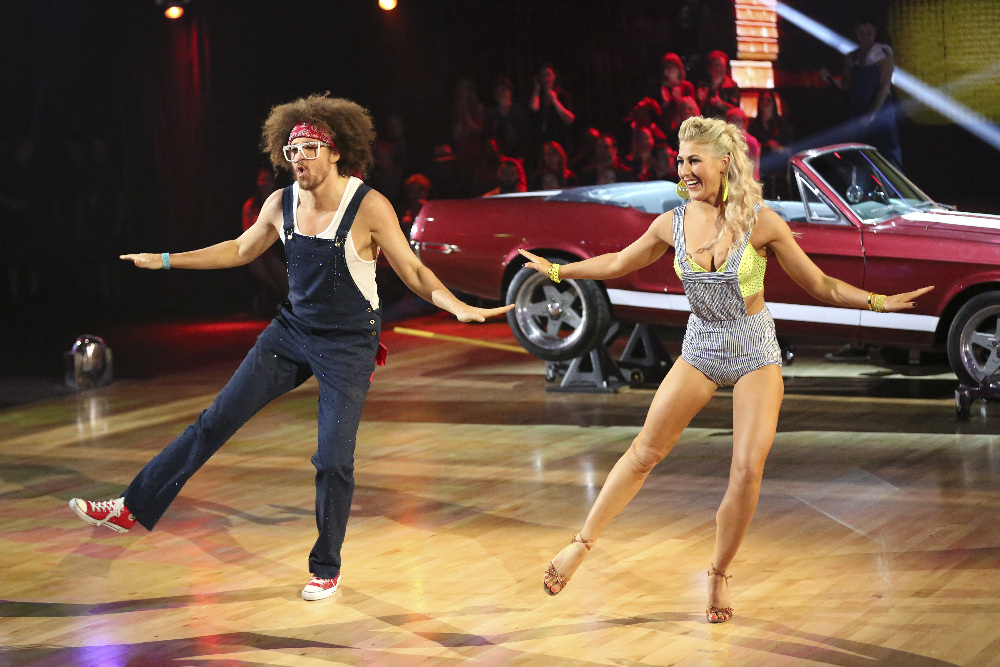 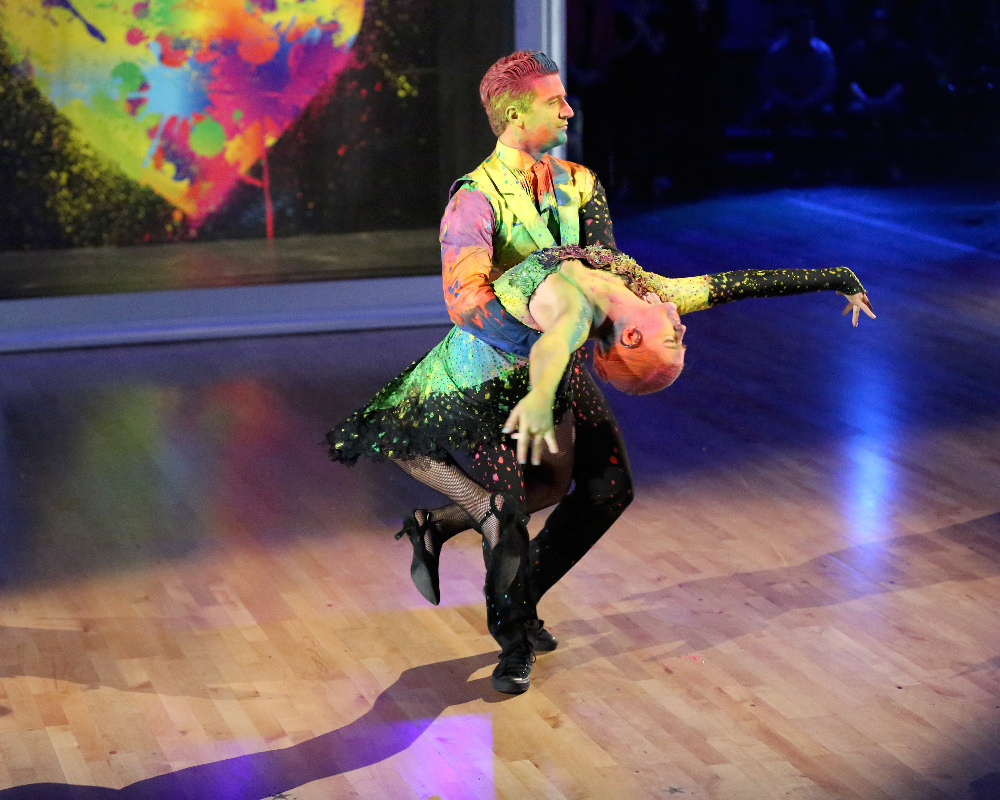 Willow / Mark:  This was one of my favorite dances of the night. The Argentine Tango, which is always challenging and always so beautiful when done correctly. This was done not only correctly, but with such creativity and cleverness. Whoever came up with this concept is genius. Their song choice was Gutye’s “Somebody That I Used to Know”, and they chose to pay homage to the cool as hell music video. So, their costumes were covered in paint colors , which they splattered on themselves by attacking one another with paintballs. I don’t know any of the terminology of the moves in this dance, but I loooove that thing where the woman leans forward into the man and sort of becomes “limp”, as he glides her across the floor. It is so gorgeous looking, and they did it beautifully. And yes, she is only 14 years old, and this was an incredible dance, for any age. Carrie Ann thought the concept was brilliant, Len found it fabulous, and Bruno went as far as to call Willow “a potential winner.” Scores were 8/8/8/8. 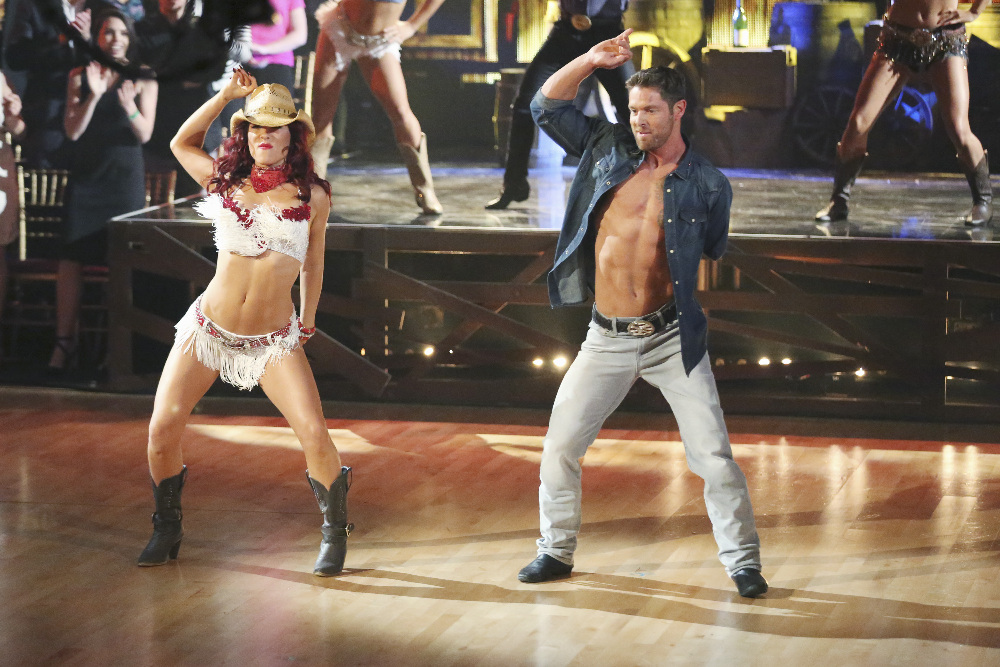 Noah / Sharna:  Okay, here came the first real sets of tears, PLUS the “inspirational moment”, all in one couple. During rehearsals, Noah was talking with his girlfriend via iPad/Skype, as she is gone at basic training in the army for 6 months. He misses her like mad and dedicates his dance and song to her, a song by Darius Rucker about love. Sharna tells him to pretend that she is his girlfriend during their dance, he does, and it is a great dance. Now remember, this man has ONE ARM AND ONE LEG ONLY!!! So go ahead and add that to the mix of inspirational and emotional and all that jazz. So the judges are giving their comments, and Len says “I’m 70 years old and I’m getting jealous. Put your shirt back on.” Bruno then also refers to Noah’s “A-pack”, and then Horny Carrie Ann brings it all home with “that was soooo HOT! Like, really hot!!!” Backstage, scores are 7/6/7/7. Erin asks Noah how it’s been without his girlfriend here to support him. He says “Its been really hard, but I’m picking her up in 2 days, so …”. Erin says: “OR … right now!”, and his girlfriend appears out of nowhere, there in person, and they hug and hold each other endlessly. They are both crying, as is the entire universe. My God …… 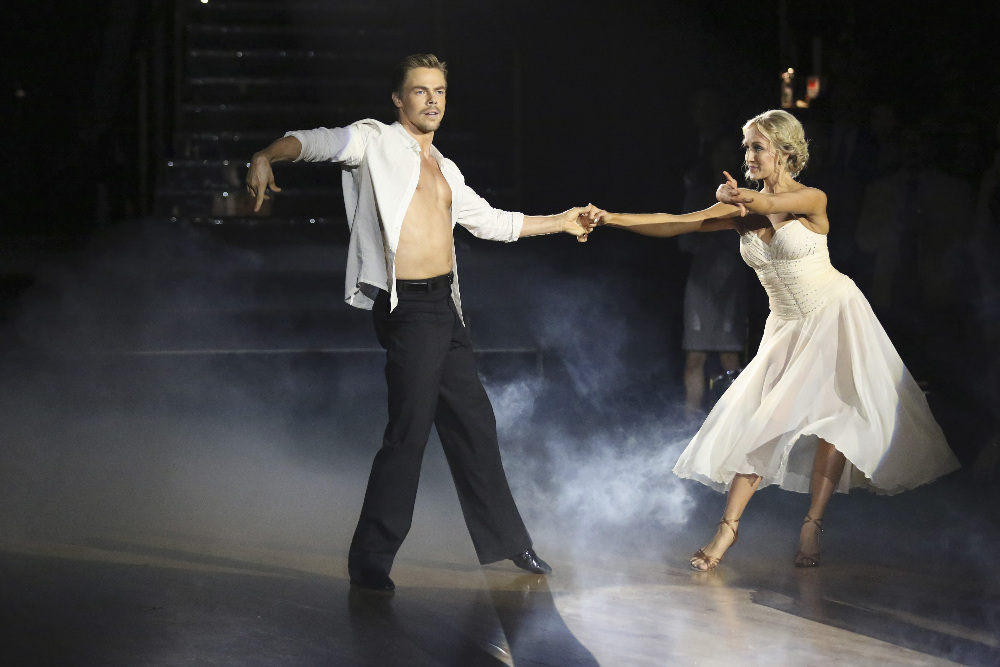 Nastia / Derek:  The Rumba – another favorite dance of mine. This was truly gorgeous. Nothing more to say, really. It was just awesome and kind of flawless. Bruno agreed. Carrie Ann called it spectacular. Len called it “clean and crisp, unlike my old man bladder.” Okay, maybe he didn’t say that last part. I can’t be sure. Scores were 9/8/8/9. 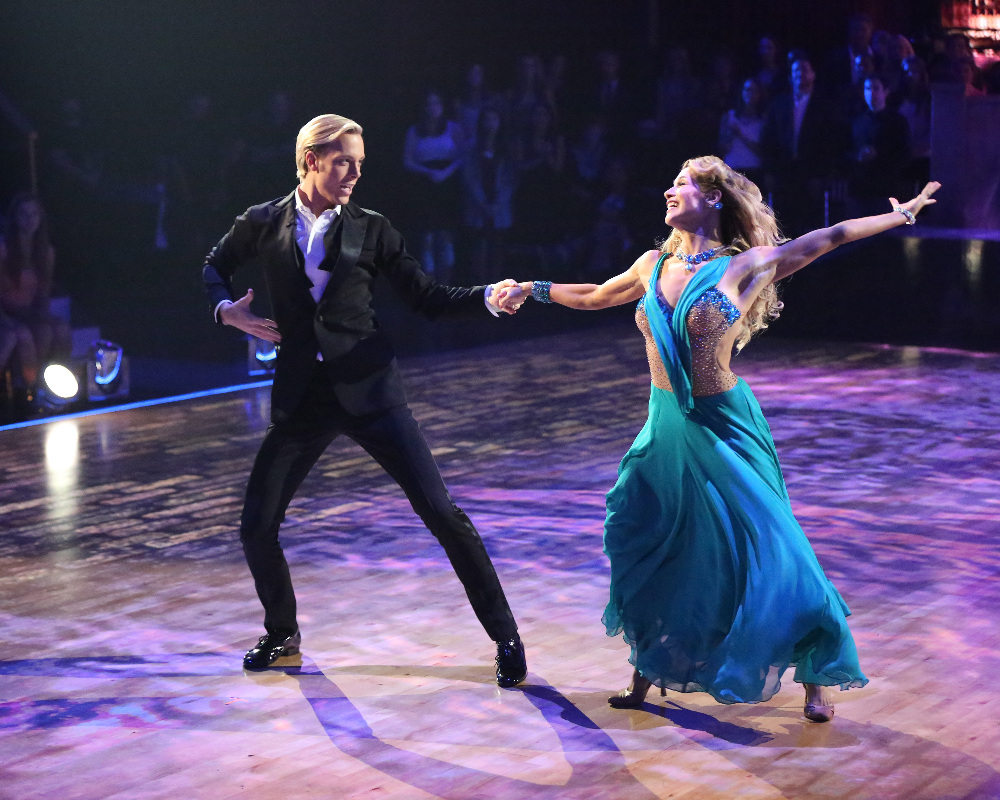 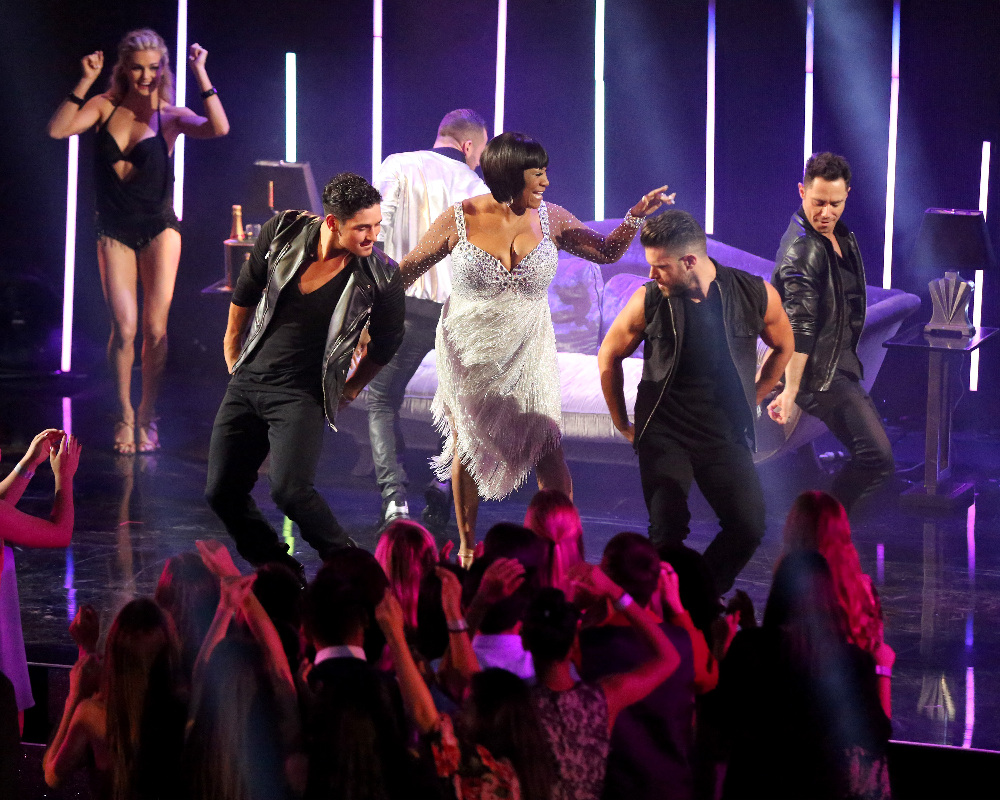 Patti / Artem:  I loved, loved, loved, loved the fact that Patti LaBelle unapologetically chose 50 Cent’s “In Da Club” as her jam, and then danced it up like a party animal. It was fantastic. She took on the role and you could tell she was loving every minute of this song. Their salsa was such a blast, and cool as hell. Julianne said she wants to go to the club with her and dance. Bruno called it “Kooky. VIP. Empire. Hot.” What on earth are you talkin’ bout, Willis? Scores were 7/7/7/7.

RESULTS: RedFoo and his silly name and hair go home. Everyone is sad and shocked. That’s what you get for being named RedFoo. Tune in next week, when emotions fly high, and there’s a shocking murder on the dance floor. (Not really. But now youll watch, right?)