This week Dancing With the Stars aired back-to-back night episodes, with the regular Monday episode, followed by the 10th Anniversary Special, which highlighted not only 10 YEARS but also 20 – yes TWENTY seasons!!! I told you – this show is on 47 times per year! It never goes away! There’s a lot to cover, so let us begin. The regular episode was “Era Night”, where each pair was assigned an era or decade time period, and choreographed a number to it. There was also a “Dance-Off”  which paired couples against one another, each dancing to the same music and dance style, back to back. Can somebody please check to see if Len is still awake? 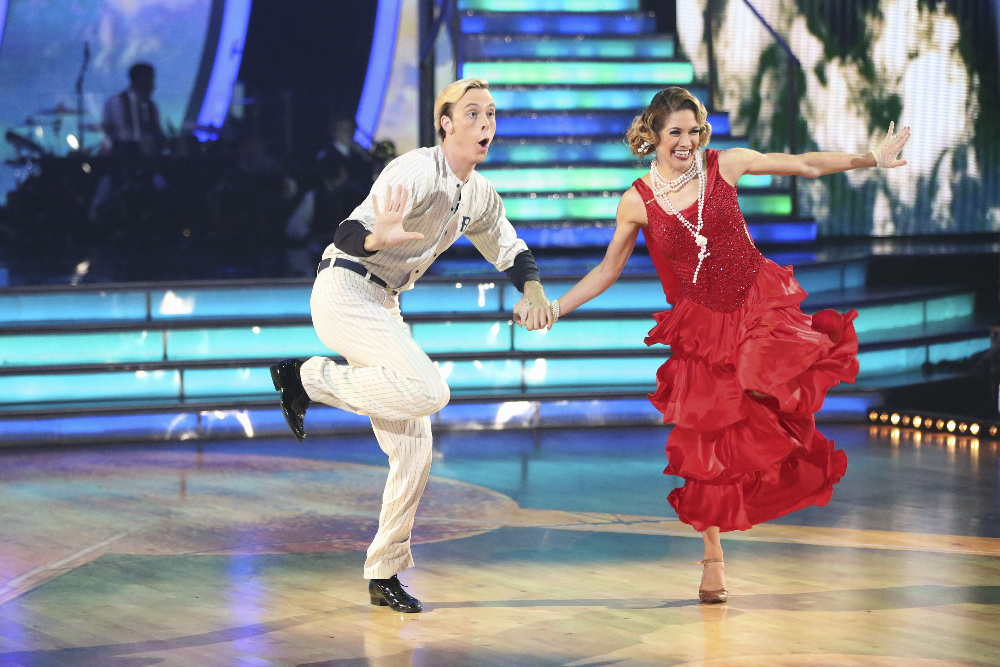 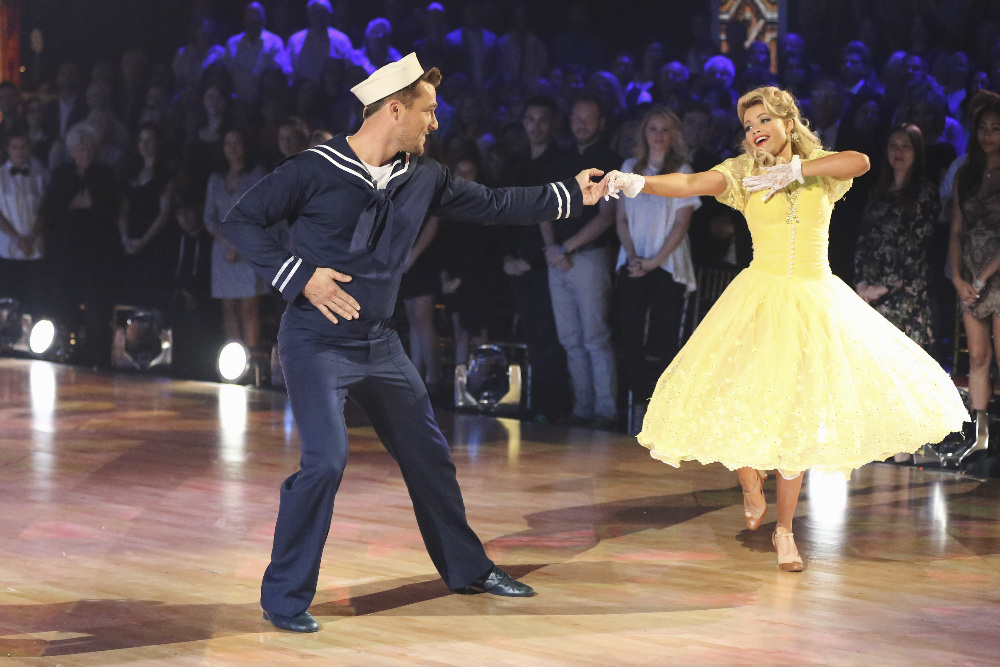 Farmer Dull / Witney:  They did a Foxtrot to Frank Sinatra, and their era was the 1940s. Storyline was that he was a sailor going off to war, and they had one last dance. She said in rehearsals that her strategy was going to be using his personality – I almost laughed myself out of my chair. Personality? WHAT personality? The man has the excitement level and persona of styrofoam. So, good luck with that. Julianne thought the dance was awesome, and Bruno made the most hilarious comment with: “Well hello, sailor! I think you are turning ….. into a dancer!” He is so funny, and out of his mind. Scores were 8/7/8/8. 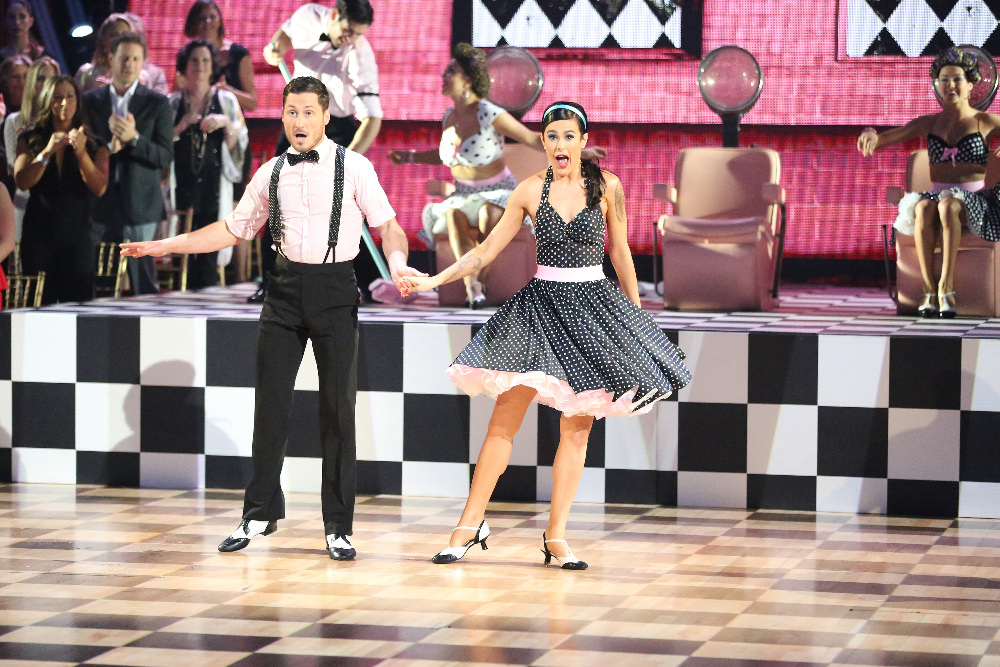 Rumer / Val:   During rehearsals, dad Bruce Willis stopped by to cheer his daughter on and visit her. “I’m so proud of her. She makes me cry”, he said. As for Rumer, she was emotional this week, feeling like her body was breaking down and like she was totally exhausted. Carrie Ann thought their dance “felt too safe”, and Len called them “a great pair.” Scores were 8/9/9/9.

Noah / Sharna:  When talking about last week’s footage that showed Sharna in a negative light, Noah told her “You’re amazing. You’re the only one who could work with me , and so I’m very protective of you.” Awwwww ….. Noah also met Amy Purdy this week, who stopped by rehearsals, and they shared with each other the challenges of performing on the show with missing limbs. She told him it is about putting your soul and personality into the dance. Their style was Jazz and their era was the 70s, so they did a pretty epic dance where he was the leader of a gang, and she sported the craziest afro-wig of all time. There were tons of cool and smooth and slow arm and hand movements, and it was really hip and modern. Carrie Ann stood up and literally started screaming like a maniac “What? What? What? What? Oh my …. What? What?” Lady, what the F are you on??? I guess she liked the dance. Julianne said it was some of the most fun she has had while sitting at the judges table. Bruno called it “bad-ass hot. I want to join that gang!” Scores were 10/8//9/9. 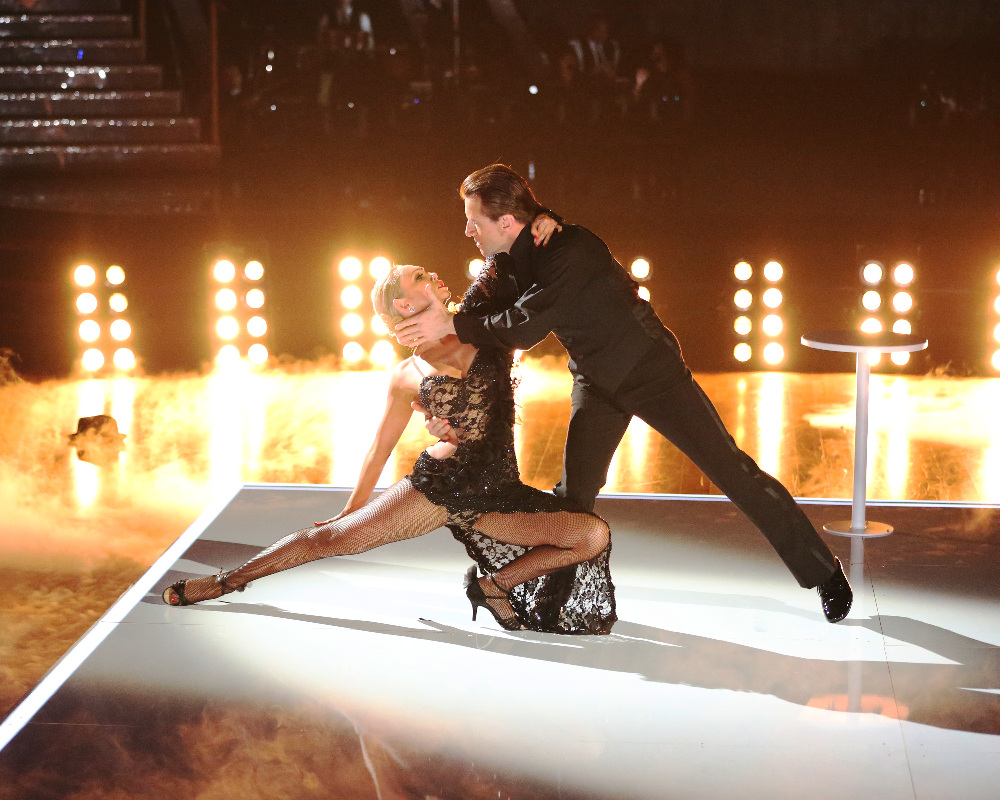 Robert / Kym:  They had the 80s, and the Argentine Tango. During rehearsals Kym explained and showed Robert what a HOT and sexy dance this is, and he complied 100%, telling her “I think we need more rehearsal.” Then they got on the dance floor and showed us all how much they lust after each other, through this dance. Bergeron had the comment of the night with: “and that was our ‘Get a room!’ dance of the night!” Scores were 7//8//8/8. 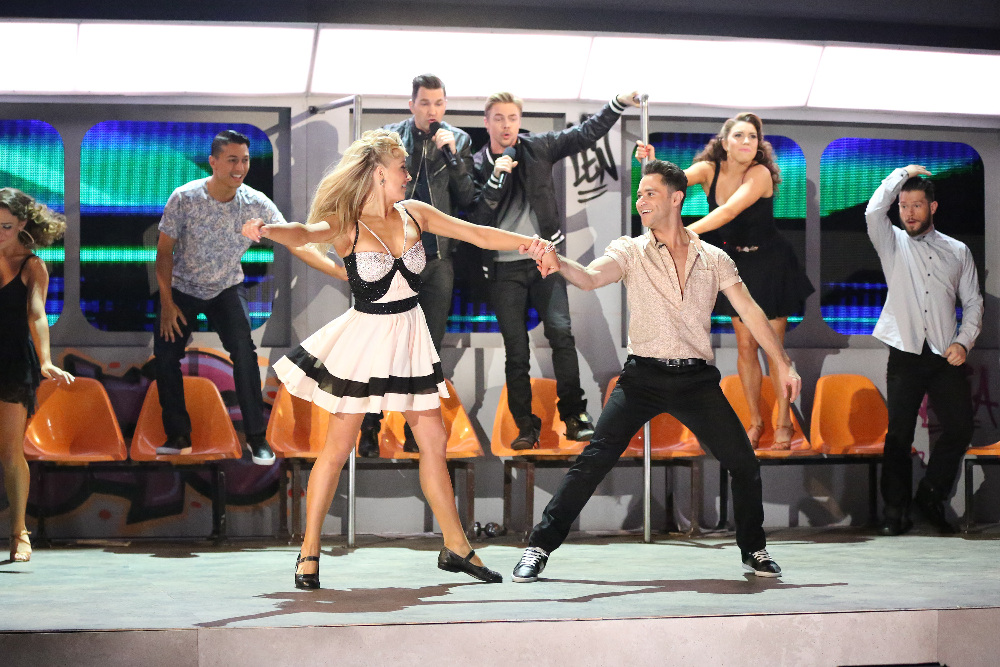 Nastia / Sasha / Derek:  A threesome. So Derek became injured during rehearsals for the Dance-off, and Sasha, who has spent much of the season in a crab suit, had to step in and do this dance with Nastia. But Derek hates sitting on his butt NOT dancing, so not only did he choreograph the number, he was also in it. The routine took place on the subway and was a Charleston. Derek made himself one of the subway riders and did some “sit down dancing” to be part of the fun. The dance was clever and the choreography was outstanding. Carrie Ann got out of her seat and gave Nastia a creepy hug that lasted longer than any of Cher’s past faces. Scores were 10/9/9/10. 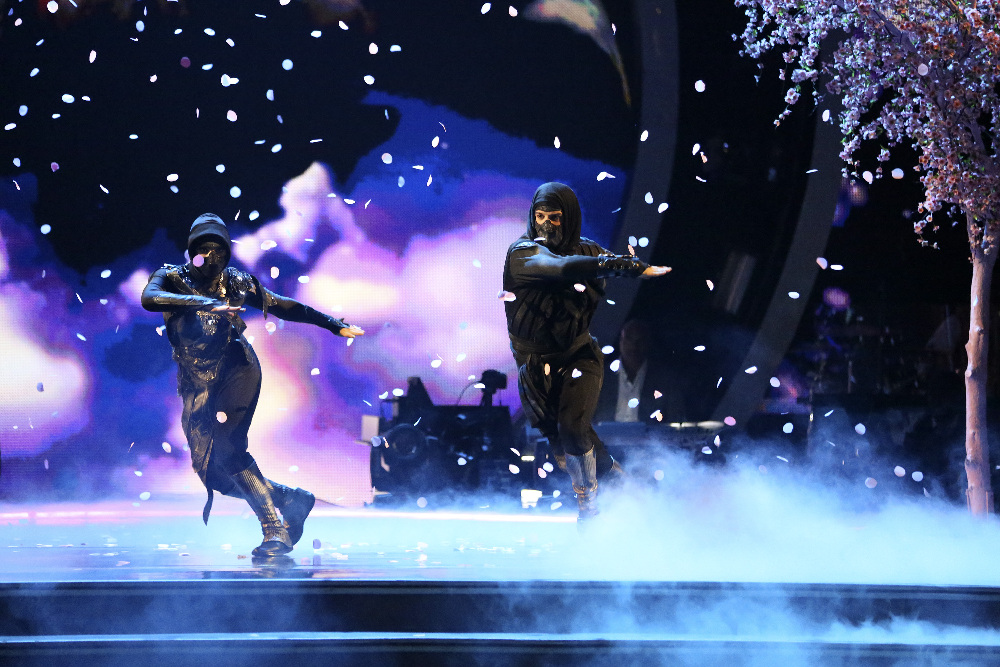 Willow / Mark:  They did a Ninja number to Jazz, and Mark referred to it as ‘nin-jazz”. Weird creepy masks on, and a very clever number as far as choreography goes. Bruno talked about his little crouching tiger now being a Master (is that what he calls it?), and Carrie Ann started talking loudly in some weird Japanese language. (Nobody knew what she was saying.) Scores were 9/9/10/10.

Then there was the Dance-off. 3 couple pairings, competing against one another, winners getting points added to their overall scores. In the three pairings, the winners were Willow and Mark, Noah and Sharna, and Rumer and Val.

But it barely mattered, because minutes later, WILLOW AND MARK were sent home from last weeks votes. Really? So Farmer Blah STILL gets to stay there and be cardboard? I don’t get it. Anyway, Willow cried because she really didn’t want to leave, and Mark told everyone how incredible she is and how proud he is. 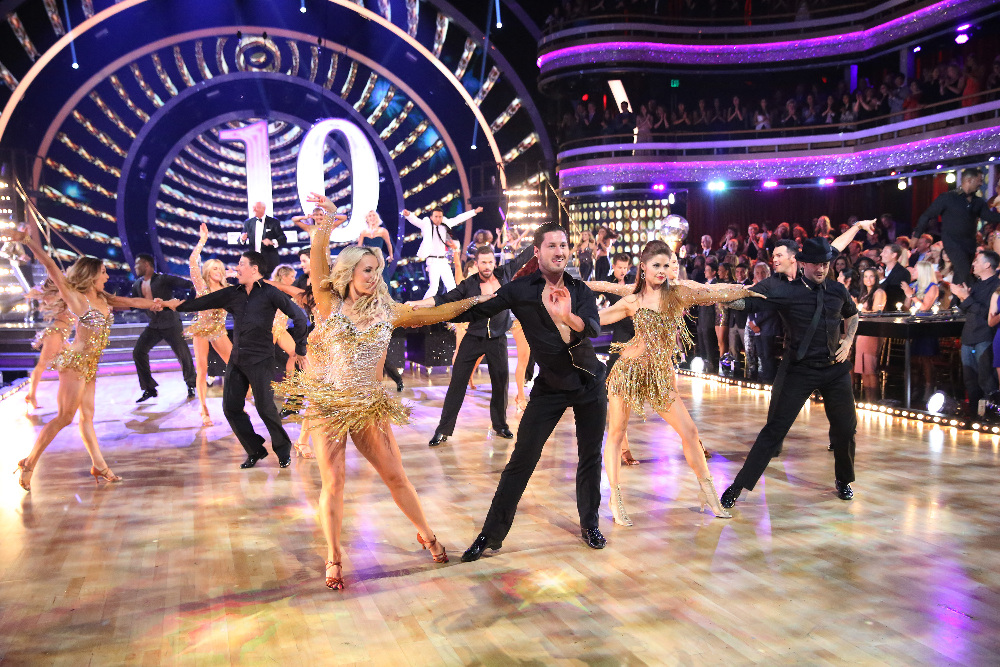 Ten Years of Mirror-Ball Madness:   Then it was time to celebrate 10 years and 20 seasons of the show, with an all-star cast lineup of past performers and winners. There was a “trip down Mirror Ball lane”, courtesy of Bergeron and his awesome puns. Lots of past champs danced, such as first season winner Kelly Monaco, Amber Riley, Kelli Pickler, and more. There were clips and memories, judges comments , and then Maks and Len on a bicycle built for two – with both of their faces inside of a heart. Last years champs, Witney and Alfonso, danced for us, and then a clip was shown of the time when Witney accidentally hit Alfonso in his nuts, forcing him down to the floor and wincing like a child. In the footage, he is hurting and grabbing his area in pain, and Witney says “Are you alright? What do you need? A snack?” Tom Bergeron with the line of the night:

“When you’re hit in the sac, just get a snack.” – Tom Bergeron

The return of supercouple Maks and Meryl was fun to watch, and the best part was when the show embarrassed Maks with the showing of his audition tape for the show over 10 years ago. The 7 NFL stars that have danced on the show all did a combined Paso, and Patti LaBelle sang Lady Marmalade with Amber and Lil Kim . In the end, it was a night of pure entertainment and cheese.

NEXT WEEK: Somebody else who ISNT Farmer Boy will probably go home. Actually, next week is double elimination, so more chance for Farmer Dull to be the last one standing.