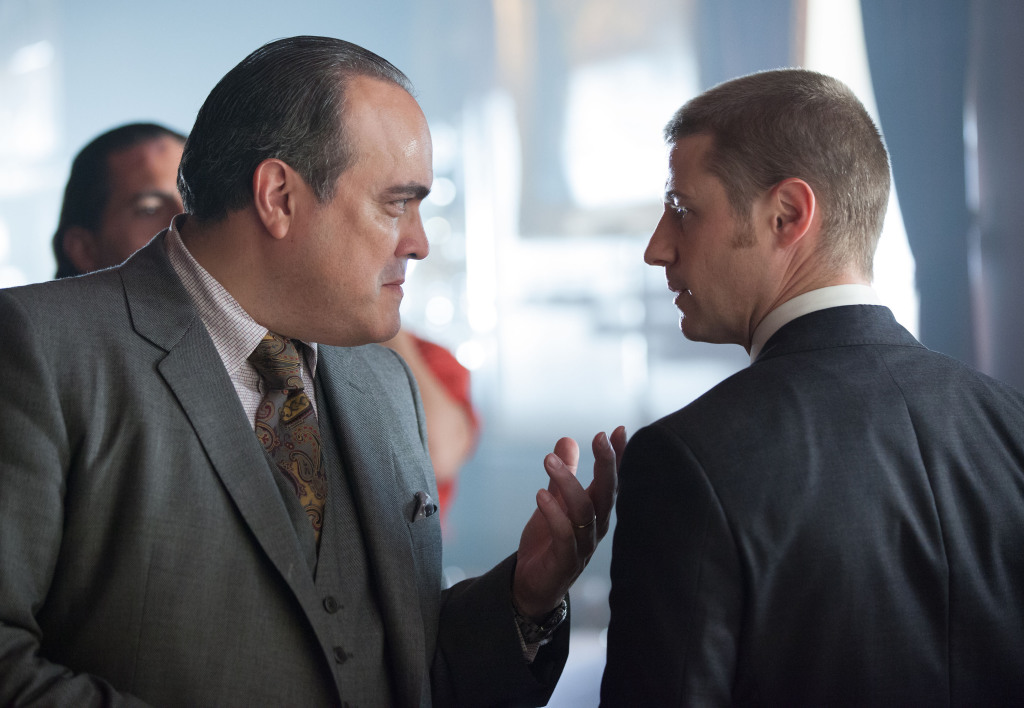 RECAP:
A busker takes a drug called, “Viper”, then robs a convenience store of its ATM Machine, carrying the thing on his own back in the latest episode of Gotham, appropriately titled, “Viper”. Gordon and Bullock are, of course, sent in to investigate and find the man practically swimming in ATM cash in a burnt-out old warehouse. Unfortunately, the drug has a mean side-effect: death by accelerated bone decay. The drug, as it turns out, was a prototype of “Venom” which, as Batman fans know, was Bane’s drug of choice. Since this is pre-Batman and pre-villains, we don’t see Bane just yet. Meanwhile, little Bruce Wayne thinks he’s found some irregularities in the dealings of his parents’ company, Wayne Enterprises, but before he can make the Board Members aware or even ask them, the man responsible for poisoning Gotham’s citizens with “Viper” interrupts and tries to poison the Board’s cocktail party. Bruce and the rest seem to escape the assault while Gordon and Bullock get the man responsible for the crime on top of the roof. Meanwhile, Penguin is alive and basically applies for a job running with Sal Maroni who, at first, is reluctant but warms up to Penguin after he finds that he’s trustworthy. Lastly, Fish Mooney, Sal Maroni and Carmine Falcone all struggle to take over Gotham via your usual underworld corruption. Fish trains a young girl named “Liza” in the art of seduction. The episode ends when Liza approaches Falcone, randomly singing “O Mio Babbino Caro”, much to Falcone’s nostalgic delight. She offers to let him hear it on her music player.

THOUGHTS:
Gotham really started well. I forgave the non-stop fan service and slightly wooden acting and the show repaid me, taking away some of the overdone fan service while doubling down on the wooden acting and adding some really contrived storytelling. I’m serious. At best, this is a decent crime-drama. At its worst, the show is like Glee without the musical numbers. First, I don’t really mind the whole “Viper drug” storyline. I love the intrigue and the evolution of that element. What I do mind is the outright hokey execution of the story. The “Viper” drug makes people strong, but instead of them hulking up a bit, the user’s skin just turns grey and they break something nearby to emphasize to the viewer, “Ruh Roh! He’s on Viper!” Seriously. This happens each time the drug is used: dude breaks a bat over his knee, an old man bends his walker, the guy poisoning people punches a metal container…it’s terribly cheesy and something that belongs in 70’s Incredible Hulk, not this show. On top of that, the dude forking the stuff out freely has no plan except to pump it into the vents of a building which is hosting a party for Gotham’s elite — who all escape because the drug doesn’t travel through the vents quick enough. There’s no danger or suspense. Then the villain commits suicide after giving Gordon a clue that leads nowhere anyhow. This is careless. This leads to little Bruce Wayne. Forgiving the fact that he’s suddenly a child prodigy who is smarter than all the police in Gotham PD combined, the producers of the show, in their infinite wisdom, have decided to portray him as the love child of Patrick Dempsey and Data from Star Trek. He not only deadpans every single line he has in the most robotic fashion possible, he also shows no emotion whatsoever, like the dude at the poker table who’s about to take your money, your shirt, and your wife in the final hand. It’s severely off-putting. Lastly, I don’t care about Fish Mooney. It’s not because of her gender, it’s the fact that there’s no real reason for her to be there. We already have Maroni and Falcone fighting for Gotham, so why is she here? She “wants power”. Ok. Thanks for that. Why else? Anyone? Oh, she’s training somebody to be a “weapon”. Ok. Why? There’s no motivation or reasoning. It’s “well, I’m just evil”. Also, she’s a stereotype: a dominatrix on the side who enjoys some good Fifty Shades action and, what’s more, does it to the mafia partners she works with.  I seriously hope Gotham gets better because it’s on my DVR Death Watch — and that’s telling because I’m a huge fan of Batman.