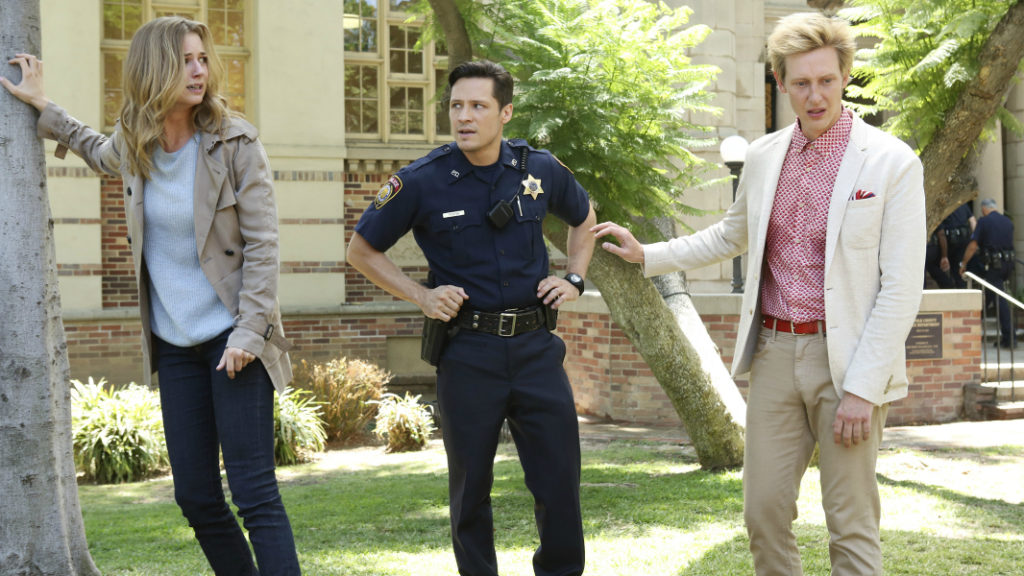 
A meteor breaks up in the atmosphere and Emily’s greatest wish came true: her father is alive and (mostly) well…but is under the influence of the evil Victoria Grayson, thereby destroying her world.

Thus, “Meteor”, the title of the latest episode of ABC’s Revenge, is very fitting.

It took Emily three seasons to take out Victoria and the entire Grayson empire. She left nothing to chance, covering every base, dotting every single “I” and crossing every single “T” — and, yet, Emily’s world is starting to crash down around her with a reinvigorated Victoria who is threatening to raise hell, using her father as her trump card.

This story is the emotional crux of the episode.

At the beginning of the episode, Emily and Nolan have a bit of a heart to heart: he wants to call the police to report the mysterious intruder who tried to kill her in last week’s episode and Emily doesn’t want the police anywhere near them. Why? Because Charlotte, Emily’s sister, who didn’t meet a bottle of pills she didn’t like.

Lo and behold, Nolan invites the cops anyhow and, wouldn’t you know it: it’s Jack and Ben, the Riggs and Murtaugh of the Hamptons. Emily explains the attack and Ben and Jack eat it up with a spoon because Everybody Loves Emily. As Ben and Nolan collaborate on the security of the mansion, Jack warns Emily that he’s going to investigate Victoria for that attempted assault — but if anything happens to Victoria, he won’t hesitate to arrest Emily. Emily accepts this as Jack has clearly had enough of Emily’s games.

Meanwhile, Victoria offers to help David resurrect himself by building a convincing narrative. David wants to know specifics, to which Victoria replies, “I’ll handle it.” This clearly triggers something inside David and he informs her that this worries him, mainly because that was the exact same thing she said to him before he went to prison. After she leaves, David goes a bit insane, finds a chain, and begins to whip his own back with it, causing awful looking cuts. His plan is to appear disheveled and disoriented while getting arrested for petty shoplifting at a local convenience store in the downtown area.

At first, Ben thinks the department has caught the guy who attacked Emily because “he matches the description of the guy who attacked Emily”. This, even though Nolan admitted he couldn’t see his face and Emily didn’t get a clear view, either.  While prepping the line-up, he practically goes white as he sees the face of David Clarke. Emily is brought in to ID the suspects and Jack, realizing the shitstorm that’s about to ensue, tries to prepare her. However, because that’s “against protocol” (it could create bias), he’s unable to do so.

In one of the most emotional moments of the series, Emily’s apprehensiveness turns to outright shock when she comes face to face with her father, David Clarke — albeit through a one-way mirror. Tears stream down her face and Ben, thinking that she’s traumatized from the attempt on her life, consoles her. Jack, Nolan and Emily have a meeting shortly afterward (Emily said that none of the men attacked her) and Nolan can’t believe it’s possible. Emily elects to Cowgirl Up and confront her father — but the Feds arrive to spoil the party and lock all civilians out of the building.

Meanwhile, Victoria forks some cash over to her son, Daniel who, at the same time, is looking to make it on his own steam by teaming up with the mysterious Louise. Louise has a strange attachment to Victoria and, at one point during Victoria’s meeting with her son, attempts to anonymously send her a drink — which Victoria refuses, much to Louise’s chagrin. With the money from his mother, David finds himself right back in the hotel penthouse he was tossed out of last episode. He invites Margaux over to celebrate, saying that the hotel left them a 100-year-old bottle of champagne — only to find out that Louise was behind the booze and that she also wants to celebrate with Daniel. What a nice problem to have.

Back at the precinct, David refuses Victoria’s hired legal council and says that he’s handling the situation on his own. He tells a story of being held captive in an old shack by Conrad Grayson and hired thugs who beat him up on a daily basis — and shows the chain-inflicted scars. The whole thing is nicely polished off with a humorous insert shot of Victoria, who goes from slack-jawed to, “Damn…I thought I was a good liar”: 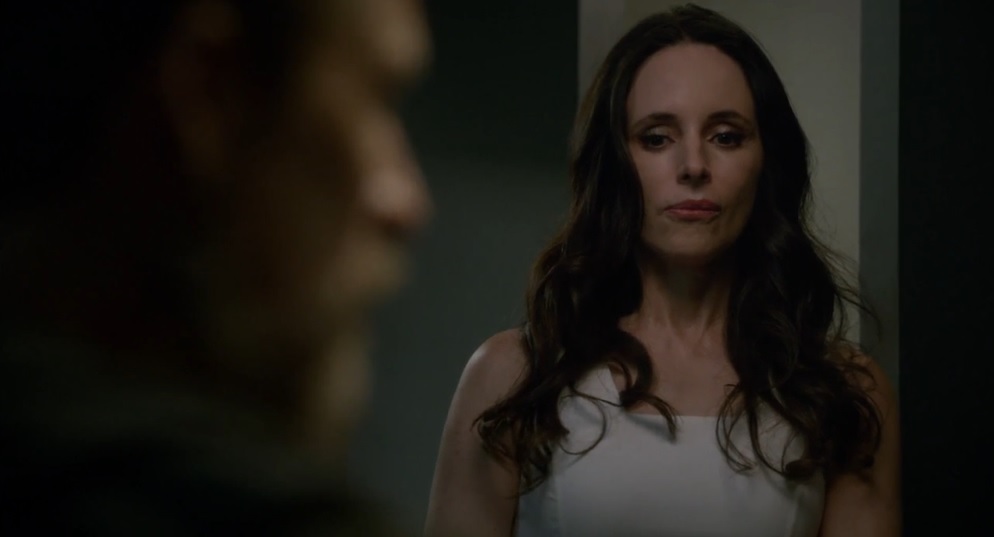 Apparently, David doesn’t need to stand trial for the acts of terror he had been accused of since Conrad already admitted to framing him, so this case is pretty cut and dry. The FBI is even nice enough to release David into Victoria’s custody, no questions asked, and these little bits and pieces really pushed the episode down a grade. As awesome as it was, the logic is so stupidly off the charts, it insults everyone’s intelligence. David isn’t cool with this and says that he’s reached a point where he will no longer be a slave to anyone — including Victoria. She begs him to stay with her, so that they can all be one big happy family. Reluctantly, David agrees.

After debating with Nolan and Jack on how they need to handle things from here on out, Emily is finally ready to confront her father at David’s big press conference. Everyone in town seems to show up, and so does Emily — only to find that she’s been replaced by the very people she thought she put away for good. David calls Victoria and Charlotte his “family”. A dejected Emily looks at Nolan, who wonders what just happened.

Emily’s reply is simple and stark: “She got to him first.”

Revenge has been on a roll. This fourth episode continued to deliver the goods. It was well-paced and, with the exception of Elena Satine, was impeccably acted. My biggest problem with Satine is the fact that she cannot keep her Southern accent and seems to be fighting it off. At one point, you forget she’s got it and, the next, she’s calling people “darlin'” while spewing home-spin country wisdom. It isn’t convincing.Maybe that’s the point. She was, however, better than she’s been and a lot more outgoing, which is a huge plus. Her performance almost reminds me of one of those murder mystery dinner guests that plays their role right out of the box. You know that she has something up her sleeve…you just don’t know what is. It’s even more interesting that’s she’s getting close to Daniel which, in turn, would bring her closer to the person she idolizes: Victoria. The main thing that brings this all together is the public return of David Clarke and the emotional reaction from each of the main characters who have stood with Emily through thick and thin. It’s that very element that, combined with the possibilities set up for the big finale, that makes this episode very much worth watching.