Chopped Hands, Centaurs, Threesomes, and More on ‘The Magicians’

This week’s episode of The Magicians brings us to the immediate aftermath of Alice’s death. The squad find themselves overwhelmed with responsibility and tragedy, which makes for some entertaining TV. Here are the eight things you need to know. 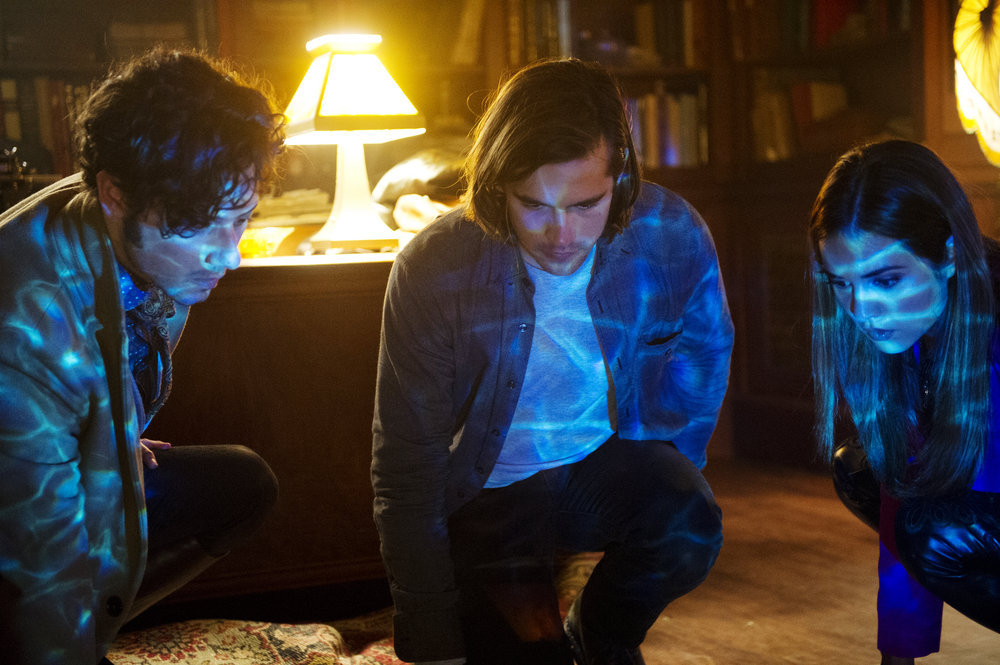 The Wellspring is still foul

Despite the employment of multiple filtration systems, Fillory’s Wellspring is still foul from Ember’s godly excrement and isn’t recovering fast enough. Margo and Eliot continue to deal with this issue while uprisings are happening all over the land because of magic’s disintegration and the power vacuum left by The Beast’s death. Even though the squad had vanquished a tyrant, the people of Fillory still viewed them as temporary leaders because let’s face it, the other children of Earth who came before them weren’t exactly great rulers themselves. They were usually Brakebills students more interested in partying with no clue how to run an actual country, which is the predicament that Eliot especially finds himself in. 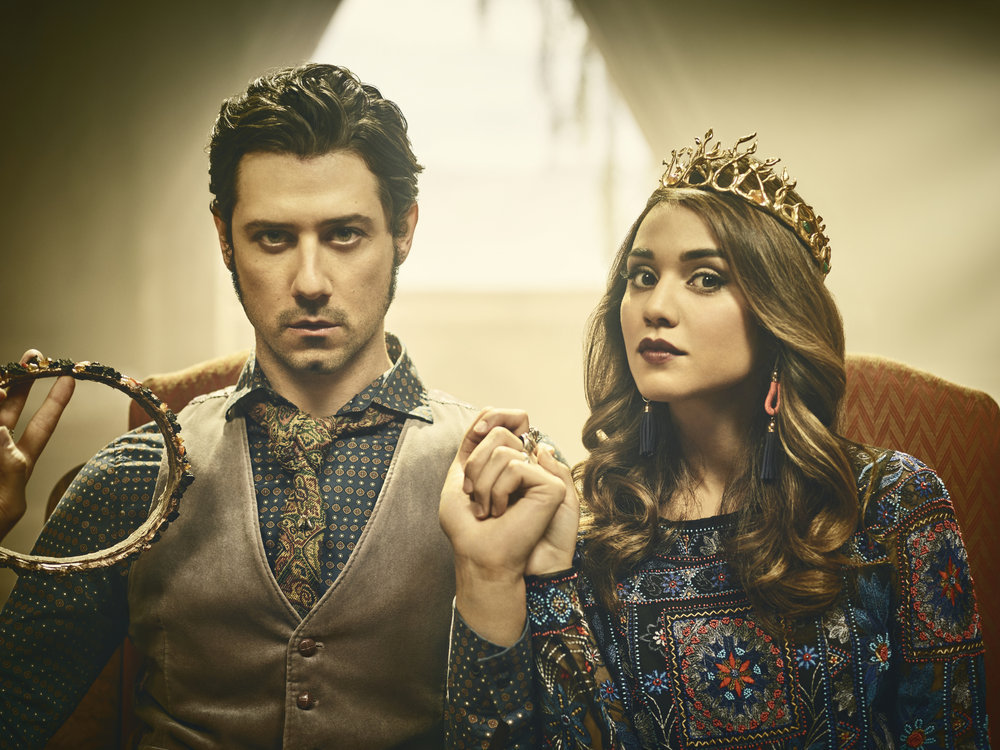 The reality Eliot faces is no picnic in the park and he constantly feels overwhelmed by the responsibility of being High King. Margo comes up with a solution by returning to Brakebills for some supplies. When she is back in Fillory, she explains that they were going to create an Eliot golem and a perform a spell that’s going to allow him to transfer his consciousness to the golem while his real body stays put. Tada loophole! It works and Eliot is able to go back to Earth.

He ends up talking to Dean Fogg about his situation and the other man says that he will help as much as he can by gathering the smartest people to assist. It looks like saving Fillory will be Eliot’s thesis in order to graduate from Brakebills. The dean also says that it’s apparent his student is trying to live two different lives and it won’t work. He must choose one. When Eliot says that he can no longer leave Fillory the other man says then that the choice is easy. 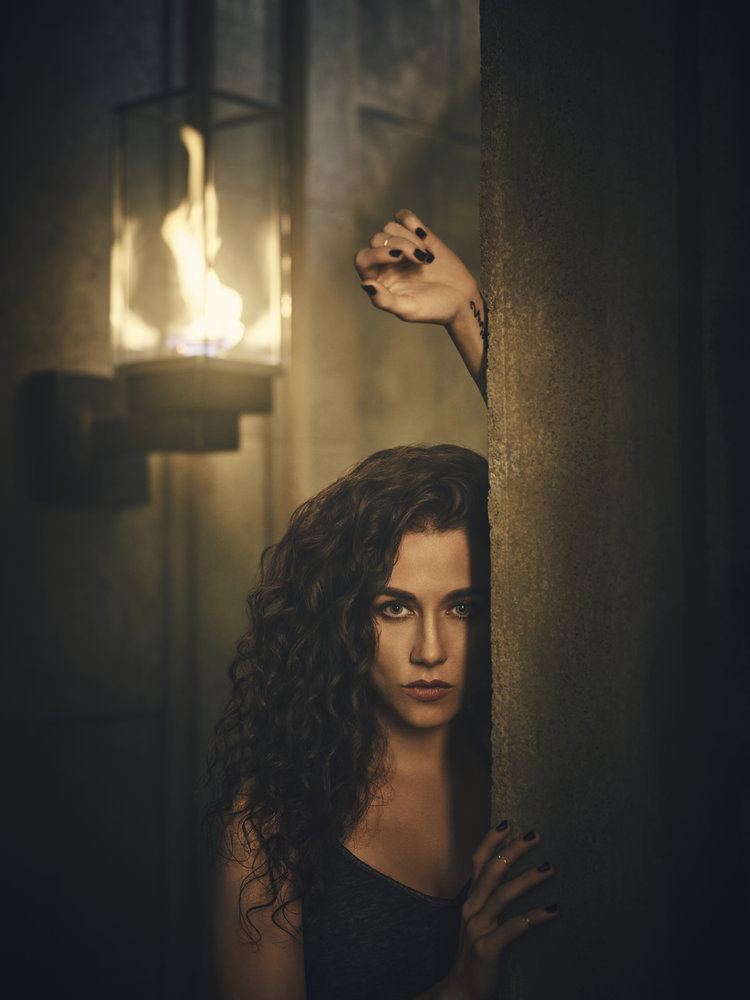 Julia finds a drugged out Kady

With Marina gone, Julia finds Kady in an abandoned factory with other people high on drugs. After the other member of Free Trader Beowulf sobers up from a hot shower, Julia fills her in on what happened and asks for her help. Kady feels bad that she abandoned the hedge witch and agrees to do what she can. Julia then shows her Marina’s preserved body and an inscription on her arm that Kady recognizes as a call number for a book inside Brakebills. Because she was kicked out, Julia has to be the one to enter the school using Richard’s alumni key. Kady is able to guide her though via a spell where they enchant a necklace that allows the wearers to see each other’s view point through a mirror. The book is located but it’s got a magical anti-theft device so that it can’t be removed from campus. Julia heads to the Physical Kid’s cabin though to manually copy the book instead. 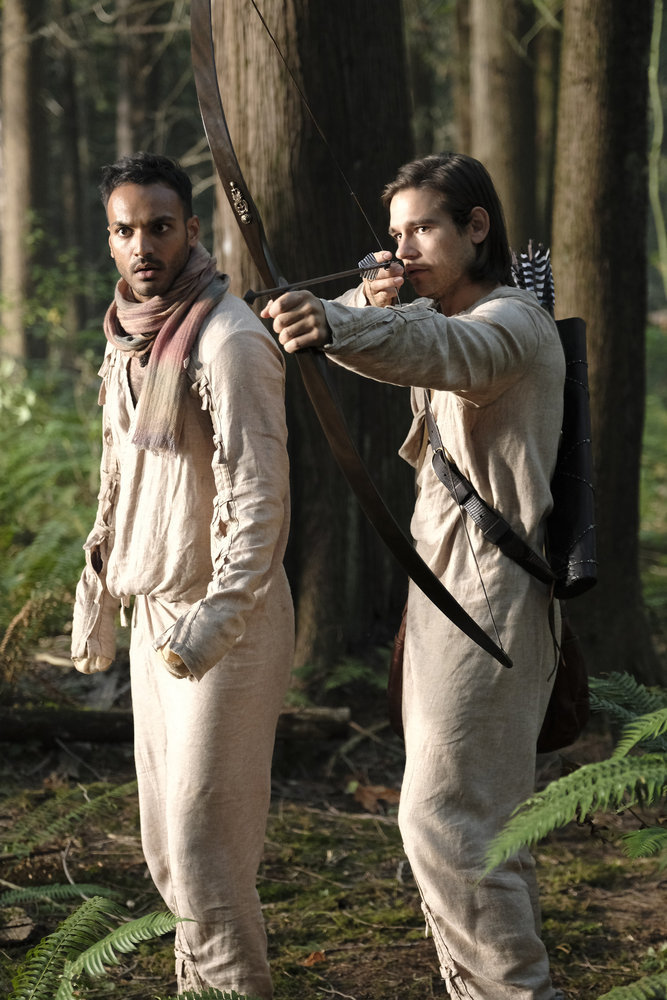 Quentin chops off Penny’s hands at The Retreat

Meanwhile Q and Penny are both at The Retreat, the closest equivalent to a hospital in Fillory. Quentin was brought there by Eliot and Margo initially to be saved from his injuries. He remains unconscious for three weeks and when he finally wakes up he gets the news that Alice was buried.

Penny arrives after Margo tells him to head there to have the Centaur healers look at his hands. Unfortunately, he is told that they can’t help and that they should get chopped off. At first Penny is not willing to do it but after he wakes up with his hands choking him, he has a change of heart and asks Quentin to do it. He gets super drunk, insults Q into hacking his them off and then screams from the pain. But good news is that he survives! 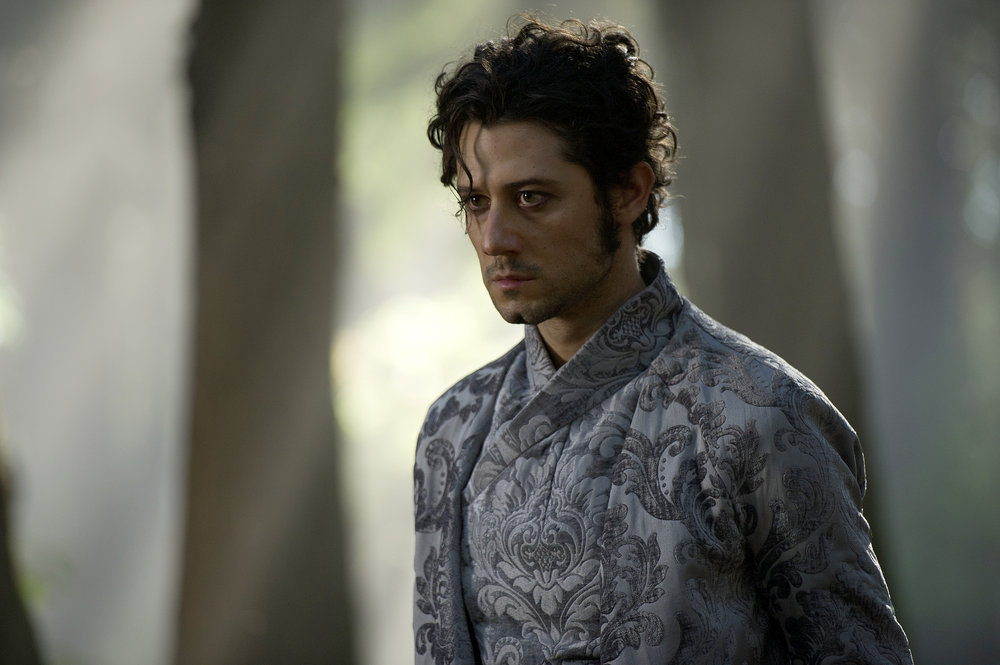 During his visit to Brakebills, Eliot and Margo find the shocking scene of Todd now being the life of the party at the Physical Kids’ cabin. While sulking and working on creating a drink to reclaim his throne as life of the party, he meets an exchange student from Spain named Javier who is in town for the Welter’s tournament. After some foreplay, they end up in a room where things get a little crazy. Somehow Eliot’s consciousness drifts back and forth between his real body in Fillory and the golem’s body in Earth. Back in Fillory, Fen had come into his chambers to check in on him while he’s in the process of sleeping with Javier at Brakebills. He ends having sex with both of them as his mind switches back and forth into the strangest cross-dimensional threesome ever. 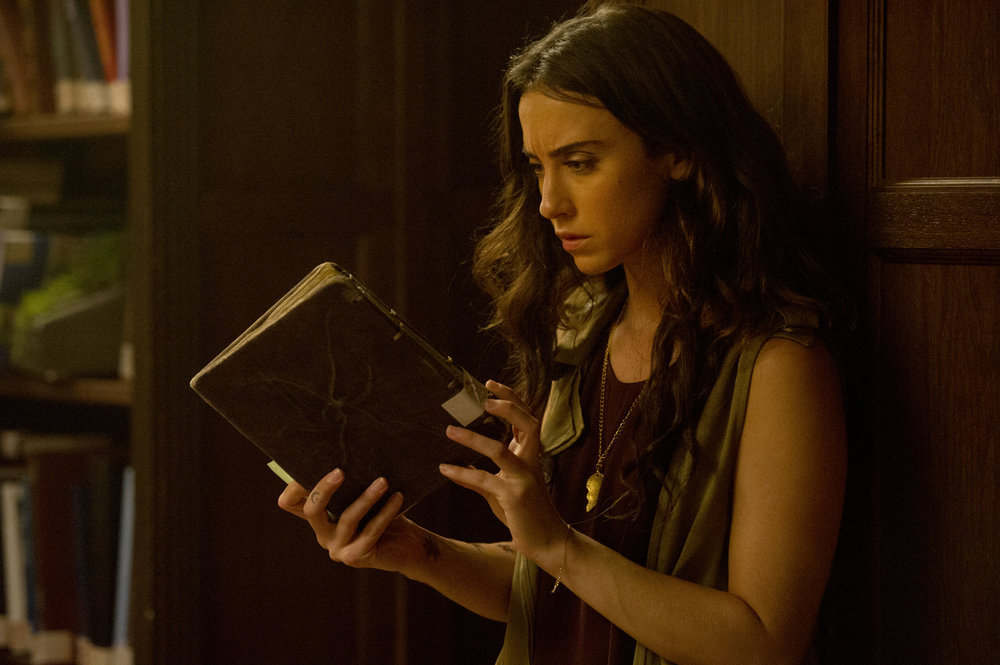 The next morning after the party, Margo finds Julia on the couch and the two women engage in verbal fisticuffs. Things end in a stalemate though as both have had a track record of selfishness. Surprisingly, Margo helps the hedge witch out by giving her a Xerox copy box that will make a magical copy of any book. Though you could say that Margo was helping herself to get Julia out of there faster. 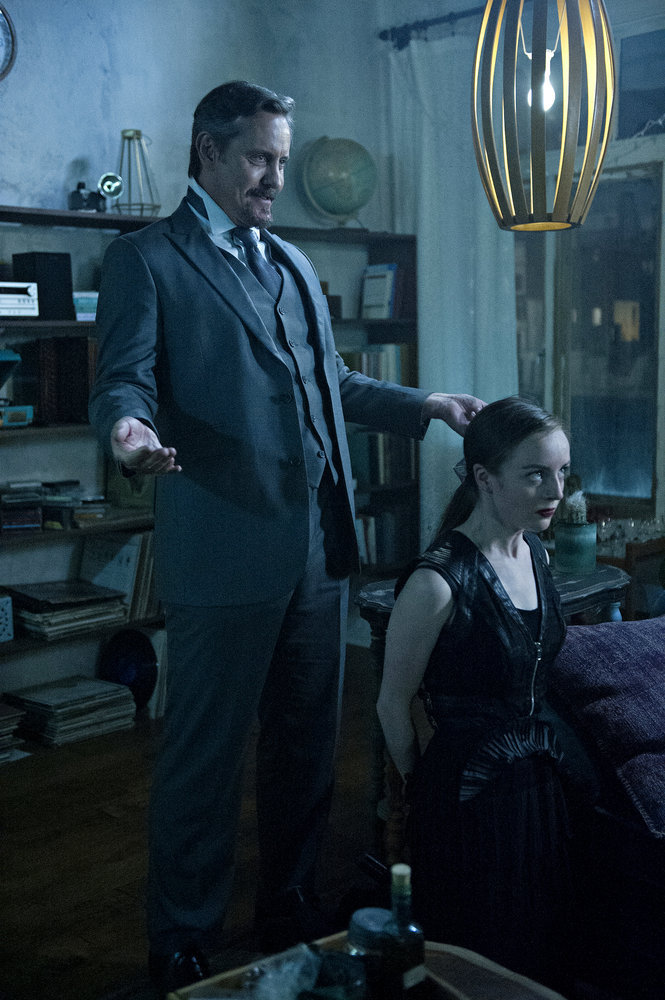 Back at Julia’s, the two women finish the spell and are able to bring Marina back from the dead (turns out it was a necromancy spell). The hedge witch is super freaked out and keeps babbling about how horrible the place she went to is and she can’t go back. But time is running out so Julia begs Marina to focus and tell her what she needs to know about defeating Reynard. The other woman gets it together and explains that 40 years ago there was a girl who was able to banish the fox god from Earth and he had been there until he was summoned again. 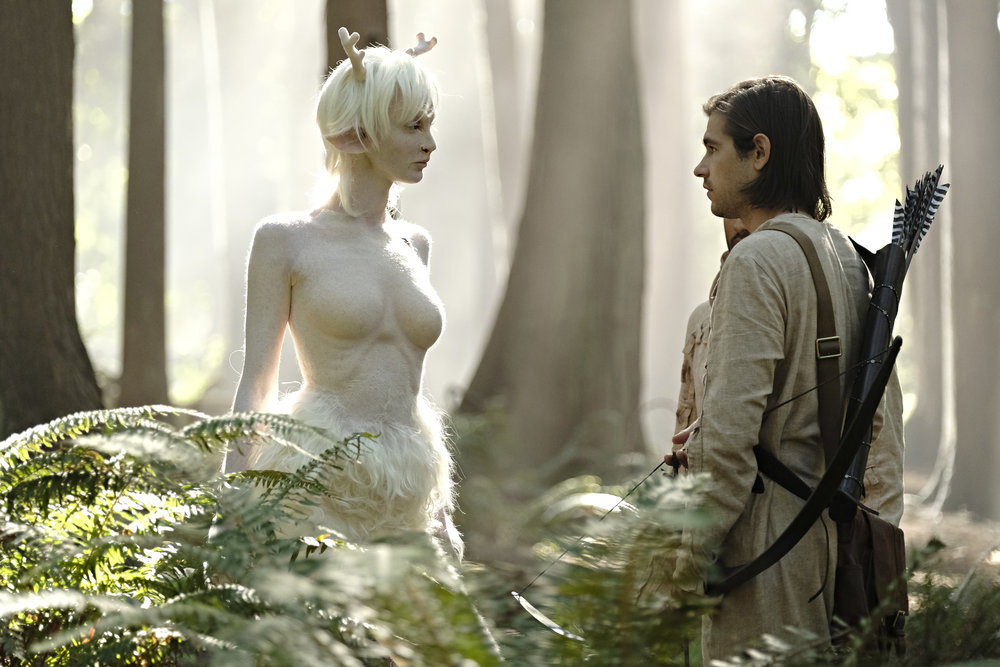 In Fillory, Q and Penny call it a truce to go hunt one of the seven questing creatures of the enchanted land, the White Lady. She is a magical being that will grant three wishes to anyone who catches her. The two magicians head to find her by passing through the Flying Forest, where they get high from fog. They spend a long time wandering inside until Q is finally able to get them out and their next stop is the Darkling Woods where the White Lady lives. They manage to find her and Quentin is able to hit her with an arrow.

The White Lady reluctantly asks then what they want and after some bickering Penny asks for his hands back, which she grants. They begin to grow and he starts screaming from the pain (she magically knocks him out because the scream was annoying). Q in the meantime asks for Alice to be brought to life again but she says that even she cannot pierce that veil. It’s an incredibly sad moment for Q who now has everything he ever wanted but none of it can save the girl he loves. So instead he asks to get sent home. He abandons his bow and quiver of arrows in a trashcan somewhere in the streets of New York City and walks away.

This was another great episode of The Magicians where the squad is forced to confront some ugly truths that they can’t keep running away from. Penny had to live with the consequences of being rude to when he didn’t have to be by losing his hands completely. His small act of kindness to help Q out with the bow paid off though that they were able to meet the White Lady and get his wish granted. Julia and Margo both had to face that they were selfish with their own interests above all other consideration. Jules is now trying to make things right by stopping Reynard from killing more hedges while Margo decides to help Eliot build a monument to Alice because of her sacrifice. Q in the meantime had to come to terms that magic really isn’t a fairytale and that crappy things still happened. He has to deal with the fact that he couldn’t do anything to save Alice and now has to ask himself what now?

Previous article
‘Shadowhunters’: The Angel Ithuriel Is Held Captive
Next article
What Is Happening To The Relationships On ‘Supergirl’?