In this week’s epic episode of Shadowhunters we met an actual angel. This being from heaven is Ithuriel and unfortunately he’s has the worst luck ever.

Ithuriel is an angel that’s had his share of bad luck being imprisoned twice on Earth, once by the warlock John Thaddeus Shade in The Infernal Devices series and then by Valentine Morgenstern (Alan Van Sprang) many years later. Initially, the angel was trapped inside a small clockwork angel through a spell by the downworlder. Shade intended to give it to his wife Ann but they were both killed by Shadowhunters. Their adopted son a mundane named Axel Mortmain finished it instead and used it as a tool for revenge against the nephilim. He had been able to attune it to the life of Tessa Gray, who was the child of a Shadowhunter and an Eidolon demon. Her mother Elizabeth had been born as Adele Starkweather but was switched at birth with a mundane baby. He then ensured that Ithuriel would save Tessa’s life so that she would be born safely (most unions between demons and nephilim were stillborn). Because of her demon father’s blood, she was able to shapeshift into Ithuriel to kill Mortmain, saving her friends and freeing the angel from his prison. 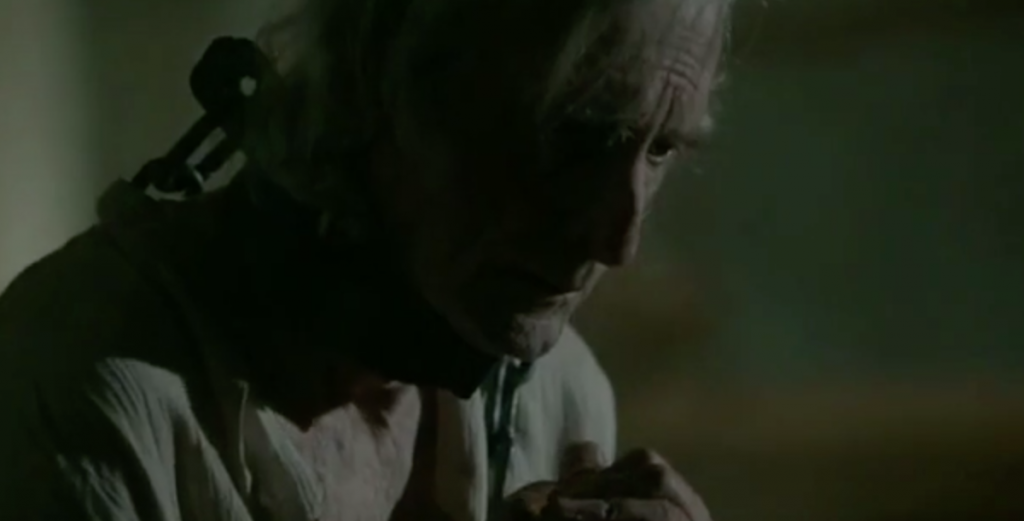 On the show, we first meet the immortal figure in chains as he is imprisoned in Valentine’s new hideout, another abandoned factory. He appears as a very old man in filthy ragged clothes. The rogue Shadowhunter says that he freed Ithuriel from entombment and instead he tries to warn Clary. Valentine wants the angel to stop trying to reach his daughter. In The Mortal Instruments series, the angel had been summoned by the Circle leader inside Wayland Manor and had been trapped in the basement for years. I wonder if that’s what Val meant about liberating the angel from another prison in Idris.

Clary (Katherine McNamara) starts to here a deafening sound that only she seems to be able to hear until Cleophas (Lisa Berry) tells her to activate her hearing rune. This allows the ex-Iron Sister to hear what she was hearing and we discover that Ithuriel had been crying out to Clary directly for aid. This is a turning point for Cleophas who had activated her Circle rune and planned to rejoin Valentine as a loyal follower. She told Clary that imprisoning and torturing an angel was against everything that Shadowhunters stood for. I guess this it what it took for Luke’s sister to realize that Val is crazy. Acting as a double agent now, she claims that she has to help free the immortal being. Cleophas explains that Valetine intends to use Ithuriel and the coming storm to activate the Soul Sword to kill every creature with demonic blood in them.

She leads Clary, Luke (Isaiah Mustafa), and Jace (Dominic Sherwood) to Val’s hideout where she and her brother confront their former friend while the Morgenstern siblings rescue Ithuriel. Jace and Clary manage to take out the guards but it’s only when the angel shows her another rune to draw on his chains that he is able to finally break free. He holds out his hands for both brother and sister to take and when they do a vision flashes before their eyes of a demon whom holds the Soul Sword before disappearing into the wind. What could that possibly mean? Before they can ask any questions though, Ithuriel stretches his wings and launches himself into the sky.

Clary is definitely unique and has a special relationship with Ithuriel. If you’ve read the books you know why that is, but I’ll try to keep the spoilers to a minimum here. Needless to say Clary’s ability is more than your an average Shadowhunter’s and is an incredibly important part of her narrative. As she begins to grow into her life as a nephilim she’ll discover even more surprising things about herself.

While we only met him briefly, here’s hoping that we will see more of the heavenly hosts as the series progresses.

@theworkprint
Follow
Previous article‘I Am Not Your Negro’ Review
Next articleChopped Hands, Centaurs, Threesomes, and More on ‘The Magicians’