If She Burns, We Burn With Her: ‘Mockingjay Part 1’ Review

As you may or may not have noticed, the Hunger Games series is kind of a big deal. Fans have eagerly awaited the third installment in the movies, none more so than Trisha Leigh and myself. When it came time to decide who would write the Mockingjay Part 1 review, the two of us threw our hands into the air and then bickered like children. I offered a rap battle to decide the winner, but Trisha declined, presumably because I’m too awesome. However, we came to an agreement to write this review together. My parts will be written in regular font (shimmering with amazingness), while Trisha’s will be in purple.

Mockingjay is one of those books that divides fans. Much like Harry Potter and the Prisoner of Azkaban or GoT’s A Feast for Crows, fans either seem to love it or hate it. I suspect reactions to Mockingjay Part 1 will be as divided.

After barely surviving her second trip to the Hunger Games in as many years, Katniss Everdeen (Jennifer Lawrence–as if you all didn’t already know) literally blows the arena to pieces and then finds herself in the believed-to-have-been-destroyed District 13. With District 12 in ruins and Peeta in the hands of the Capitol, Katniss traverses unfamiliar territory, that of  the Mockingjay, the districts’ symbol for the revolution, pushed forward by the hard-nosed President Alma Coin (Julianne Moore) and the more diplomatic and affable, Plutarch Heavensbee (Philip Seymour Hoffman). Much of Mockingjay Part 1 is spent following Katniss around the districts as she films “propos” (propaganda films) to motivate the district workers into unification. I was annoyed by the return of the shaky cam in Mockingjay. Like, this franchise was moving in the right direction…now I want to vom. Literally. Ugh.

Mockingjay Part 1 is darker than its predecessors, which seems odd to say considering the previous movies consisted of teenagers murdering one another, rampaging carnivorous monkeys, and wasps that caused hallucinations. Revolution isn’t a glorifying act; the death of innocents is rampant and Francis Lawrence doesn’t pull any punches in showing the gritty horror of war. Nor does he shy away from showing the effects of fighting not just against the landscape, but the people as well. None exhibit this combination of fear, anger, sadness, and confusion better than Jennifer Lawrence. In fact, had it not been for my (unbeknownst to her) BFF, the movie would have been mediocre at best. Like Katniss, Lawrence succeeds in the emotional moments, when she’s forced to display the more harrowing aspects of life in the districts and the consequences of being a rebellion symbol. The first time she sees Peeta on Capitol TV and whispers “you’re alive,” is especially heartbreaking. Again, during the dramatic scene at the tribute center when she wails against Haymitch’s chest, “Did I just lose them both?” I cried like damn baby. OMG I totally choked up at the whole “Did I just lose them both?” moment, too. it was the most poignant emotional moment of the film, in my opinion, other than her seeing the bodies in District 12 for the first time.

Personally, I enjoyed Mockingjay Part 1. I was completely against breaking the movie into two parts from the beginning, because every time a studio does it, it feels like a money grab. But here’s the thing: Harry Potter and the Deathly Hallows Part 1 was a brilliant film. Understated, emotional, focusing on the mental anguish of facing your greatest enemy, rather than the physical. Mockingjay Part 1 is much the same. Outside of two scenes in the latter half of the film, there isn’t much action to speak of, and it takes until the final ten minutes to ramp up the excitement. If you’re looking to get your heart racing, this isn’t the film for you. Wait until Mockingjay Part 2 and watch Part 1 just beforehand to understand the plot. However, if you want to understand Katniss’ mental anguish and the irony of life in District 13, give Part 1 a chance.  It’s not a BAD film, it’s just not necessary in the strictest sense of the word. The final installment could have been expanded by an additional 30-45 minutes to include the pertinent events from this film and we all could have been satisfied before our Thanksgiving dinners.

That’s not to say that Mockingjay Part 1 is without its flaws. At one point Katniss has a Skype chat with President Snow and awkwardly shouts, “President Snow? Are you there? It’s Katniss.” Yes honey, I’m sure he gathered as much. He probably doesn’t want to talk to you right now and you’re making this uncomfortable for everyone. Especially Haymitch, who hasn’t had an alcoholic beverage in hours.  I so enjoyed the brief but much needed moments of levity Effie and Haymitch brought. They managed to lift the weight of the world for at least a few seconds at a time but I would have loved more of them. You know, since we’re already watching an extra movie, why not toss them some bones!

Most of Mockingjay’s flaws, however, are centered around the younger Hemsworth’s character, Gale. Baby Thor…what are we going to do with you? Gale in the books becomes angrier and more distant after living through the destruction of District 12. It forces him to commit to the bigger cause of the rebellion even more so than he did in Catching Fire, but in the movie they’ve reduced him to a petulant, jealous child who is sad that Katniss is worried about Peeta, or doesn’t want to make out with him, as opposed to the more organic character descent he experienced in the book where he found an outlet for his anger fighting “the man.” His distance from Katniss happened so fast with so little explanation that I’m afraid people who didn’t read the book aren’t going to really get it, and by proxy, aren’t going to get Katniss’s ultimate decision.That said, Baby Thor and J-Law have negative amounts of chemistry, so maybe this was an attempt to cover up that fact? (Their chemistry was pretty atrocious, wasn’t it?) (Yes. The kiss actually made me cringe)

On the opposite end of Katniss’ love triangle, Josh Hutcherson is fantastic as we watch Peeta’s descent into madness. The makeup and weight loss that occurs each time he appears on Capitol TV is believable, as is his confusion at the Capitol’s words that Katniss has become the Mockingjay. In the end, his final form of insanity is nothing short of heartbreaking for both Katniss and #TeamPeeta fans. In The Hunger Games, I had major concerns that Peeta’s character and motivations weren’t coming through clearly enough, but now we’re having the same problem with Gale. I am, of course, much more concerned with Peeta, so whatever. Josh Hutcherson is brilliant, and proving to everyone (finally) that he is perfectly cast. 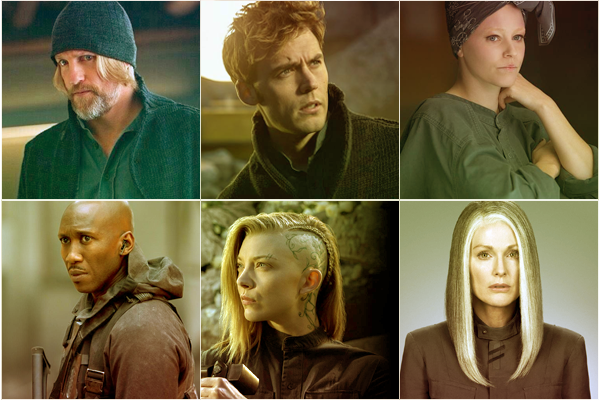 The other characters each do their parts justice in their own right. Haymitch and Effie play minor roles (sadly), but do so with such skill that it only takes a few words for them to fall into their respective character’s shoes. Moore’s President Coin is more distant than stern, which takes away from some of her interaction with Katniss and Plutarch, but it’s serviceable. And I don’t give a damn what anyone says, I still love Sam Claflin as Finnick and wanted more of his and Katniss’ relationship. I agree about Sam Claflin. I think he’s a great Finnick and hope we get more of him early in part 2. Am I crazy (pun intended) or was his girlfriend all berserko a la Peeta when she returned from the Capitol? (Yes, but she was “crazy” before her vacation in the Capitol.) (Gotcha. It’s been awhile since I’ve read it because PTSD).

Both Gale and Katniss almost died because Prim went back for the damn cat? Really? I thought that was sweet because no matter how “grown up” Prim is in the eyes of her mother and District 13, she is still a young girl ; a young girl who, like Katniss, sacrifices her own safety for the sake of others. (True, but HELLO. YOU ALMOST JUST KILLED THE MOCKINGJAY AND ALSO THE REBELLION. Use your head, little girl)

I was so impressed with the representation of female characters in the film. They were statistically present, fully drawn, appropriately wardrobed (THANK GOD), and given relevant roles and brains. We’d be hard pressed to find another blockbuster that did half as well in the past year.

To sum up: I will support anything with a female lead, especially if that lead is Jennifer Lawrence. I will go down with her ship, because after watching her carry every character on her back in Mockingjay Part 1, I’m convinced she can do anything. I agree. We can nitpick the film and beat the dead horse of WHY GOD WHAT EVEN IS A FOUR PART TRILOGY but in the end, it’s a watchable film because its stars make us want to watch them. Whatever they’re doing, apparently, even if it’s hiding in rooms full of pipes and steam.