Brooklyn Nine-Nine finally returns after last season’s surprise cliffhanger: Captain Holt is promoted out of the precinct to the Department of Public Relations, and the Nine-Nine is now under the command of Captain Dozerman (guest star Bill Hader). Jake and Amy, meanwhile, struggle to make sense of the kiss they shared at the end of last season. While these new developments shake up the formula and offer some amusing new directions for the show, viewers probably don’t have to worry about the status quo getting disrupted too much. “New Captain” offers the same Brooklyn Nine-Nine we know and love: a consistently strong comedy packed with great characters and hilarious writing.

As far as workplace sitcoms go, there’s nothing groundbreaking about a new boss or the inevitable realization of the “will they, won’t they” romance. We all know what we’re getting into here, and there won’t be too many shocking twists along the way. “New Captain” therefore only succeeds on the strength of its characters–the writing toes the line of self awareness without indulging in meta humor or self parody. Captain Dozerman is a caricature of the overbearing, “numbers-focused” new boss, to such an extent that he has a heart attack while yelling at his the precinct. Captain Holt, meanwhile, is subjected to increasingly absurd professional humiliation at the hands of his rival Madeline Wuntch when he’s put in charge of the Public Relations department and has to oversee its months-long campaign to name the NYPD’s new pigeon mascot. The anguish of his defeat to Wuntch remains tangible even as he prepares to deliver his eight-point plan to increase community engagement to schoolchildren in a giant pigeon costume. 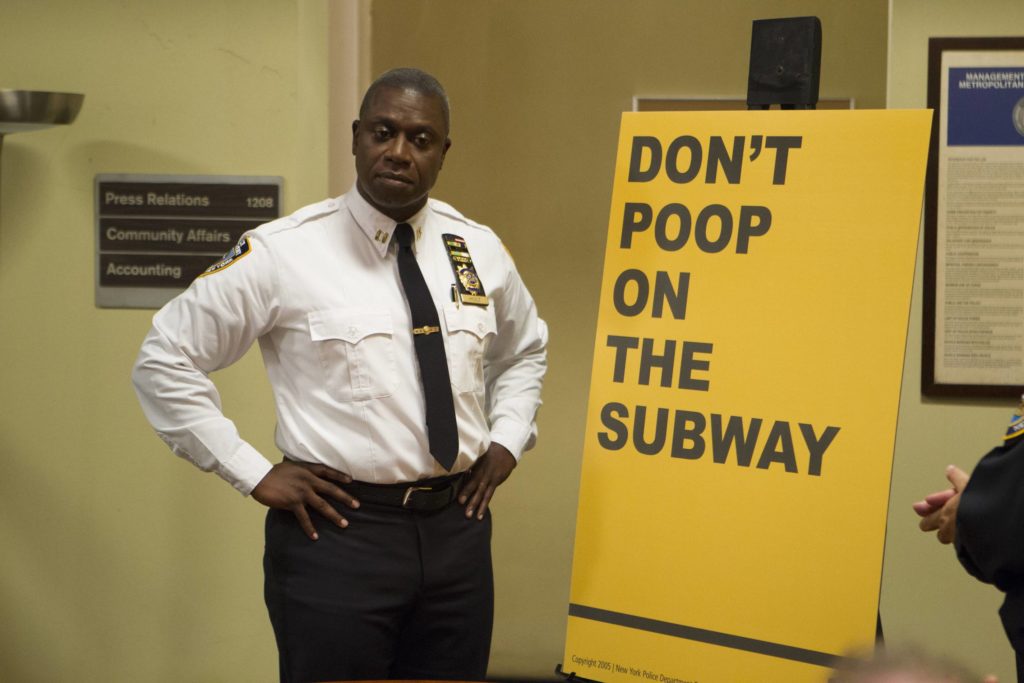 Jake and Amy, meanwhile, breeze through the standard sitcom romance template over the course of the premiere. There’s the awkward acknowledgement of their true feelings, a reasoned discussion about taking things slowly, the uninhibited desire, the attempt to hide it from friends and coworkers, the reveal, the break up, and the passionate reunion. You have to give credit to Brooklyn Nine-Nine and its writers here–even with lengthy 22-episode seasons, they don’t seem to have any qualms about quickly burning through the show’s central romance. The storyline doesn’t feel rushed, however–it’s actually refreshing to see the show getting the tropes out of the way quickly. Amy and Jake are an easy couple to root for, and it seems like everyone’s eager to move onto more exciting storylines for the two.

The rest of the cast is great as always, even if they don’t get much individual screen time this episode. Charles and Rosa have some fun at Jake and Amy’s expense, and Gina is great as she supports Captain Holt in his transition to the PR department. As ever, Brooklyn Nine-Nine fills each episode with plenty of hilarious writing; even the most crowded episodes often find time for a great line or two from everyone. Things aren’t quite back to normal by the end of “New Captain”, but there’s plenty of promise for the season ahead: Holt is determined to claw this way back to the top, and Dozerman’s untimely death heralds the return of The Vulture (Dean Winters) as the Nine-Nine’s newest captain.

Previous article
‘Playing House’ review: We’re not those people…
Next article
‘The Last Man on Earth’ Review: “Is There Anybody Out There?”