Okay, so we’re 0 for 2 and I’m feeling the faint stirrings of concern.

Bones is currently in its 10th season and has been renewed for an 11th, but I’d hate to see them start to rest on their laurels. If they’re going to keep doing this thing they need to do it, and the show has needed a good punch in the arm ever since the abrupt departure of Sweets (John Francis Daly) at the beginning of this season.

I said when he left the show that it could be trouble. Sweets’s character had become the linchpin; he was the one that everyone else related through, not to as it looked, and to take him out of the equation could leave relationships awkward and floundering. Even Booth (David Boreanaz) and Brennan (Emily Deschanel), who have always had fabulous chemistry and managed to defy the Moonshiners Curse by being even more compelling as a couple than as a will-they-won’t they-duo, have fallen as flat as a pancake.

They’re forcing the cuteness of their interactions and Booth’s fake-annoyance with her cluelessness has started to feel like actual annoyance. Hodgins misplaced his energy. Angela’s not interesting (and what happened to their kid?). We’re missing a much-needed kick from some of the best and brightest of the Squinterns and even Cam feels as though she’s tossing superfluous, random lines and appearances into scenes just to remind us she’s a character on the show. Poor Aubrey is trying his damnedest to be Sweets and it’s not really working; what he should probably do is just find his own character and play with that instead.

I think the main issue boils down to the fact that when the writers forget that this is an ensemble cast–and a capable one–the show suffers. We don’t know what’s going on with Angela and Hodgins outside of work. Bones’s family? No idea. Michelle? Wendall? Opie?

I have enjoyed seeing more of Caroline (Patricia Belcher). but even this week’s storyline, which might have had legs with any sort of oomph behind it, fell mostly on its face. The most inspired performances were handed in by guest stars Allan Maldanado and Allius Barnes, who play brothers struggling to support each other, finish school, and put food i their bellies at the same time. 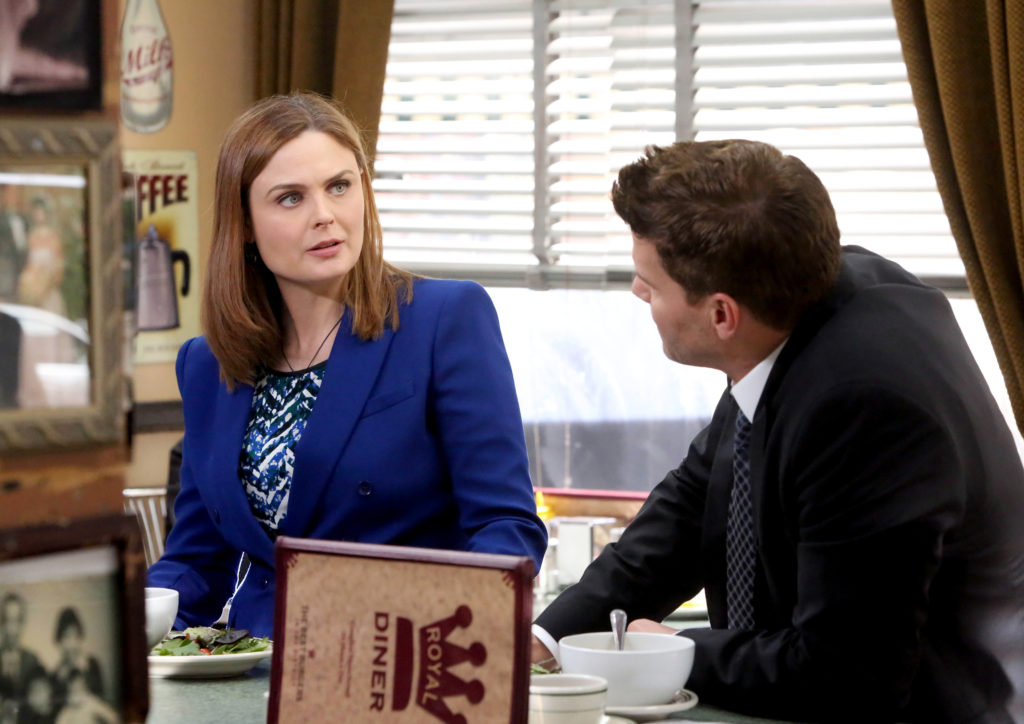 The episode’s subject matter, young teachers forgoing better paying, cushier jobs to work in understaffed, inner-city schools for essentially no money, seems like it should have worked. They talked (and talked and talked) about how the deceased character had such passion for her work and for the kids, but we didn’t get to see any of it. I didn’t feel any passion at all, just a little bit bored and the slightest bit thoughtful. Instead of coming across as inspired it bled through the television as trite. Trite tripe.

I was glad they caught the killer (of course) but less-than-shocked over who it turned out to be. Perhaps the problem was that we didn’t meet a single person who seemed to really know and love the dead teacher, even though she helped plenty of people and everyone sang her professional praises…we need to know her in order to feel for her, and for the second week in a row, the writers left us in the dark eating mini Easter Kit Kat bars and waiting for our fingernail polish to dry.

Not to mention, the side story of Brennan’s publisher asking her to get on Twitter and connect with her fans was almost painful. The quips about how social media is ruining the world, Brennan’s learning that good can also be accomplished, the clunky “but you’re ignoring the life in front of you because your face is in a screen” scene at the end. Blah. A bunch of recycled drivel that would be more at home on a contemporary remake of Saved By the Bell than a show that’s been blessed with a fan base that’s kept it going for a decade.

We’re going to need you to step it up, writers and stars and producers of Bones. Because you don’t want to be that show. The one people love, the one we stick through when we get those inevitable lackluster seasons, the one we’re so glad we did when it returns to its former glory…only to start phoning it in, week after week.

You don’t want to be the show people recommend with the caveat, “you can skip the last two seasons because they’re crap.”

Let’s use your considerable resources and get this ship back on course before we all voluntarily jump overboard into the icy, uncertain waters of new programming.