Culture. Intrigue. Tyrants. War. There is just something to western civilization rooted in our everyday forms of storytelling; especially, in video games where every empire and axe to grind is met with an Elden Ring or God of War. So when I was attending Pax East 2022 over at the TinyBuild booth and found that they’d designed a Greek and Roman culture-themed video game featuring a cutesy female protagonist, I was absolutely interested in writing about it. Little did I know… I’d also absolutely love everything about the game.

Developed by a group of industry veterans as a passion project in Acme Gamestudio, and published by TinyBuild, Asterigos: Curse of The Stars is Elden Ring meets God of War starring a Northwind Legion young warrior named Hilda. On an epic quest to find her father and his missing warriors, this journey sees Hilda explore the magical city of Aphes, which was sort of the apex of Western Civilization before a mysterious magic befell its denizens, now cursed for an entire millennia due to the magical yet mysterious nature of starite, which is sort of the source of magic in the game.

Getting to explore these mysteries of Aphesian culture, who’ve maintained order only by maintaining martial law, Hilda soon finds herself in trouble and is only able to find aid in a rebel group of insurgents called The Adherents. A group of survivors led by an ex-noble aristoi whom in exchange for their aid in saving the city, will help Hilda locate her father. While this is just the premise of what kicks off the journey, fans of traditional RPGs and Lore will find this to be one of the richest stories ever created for an indie game. The dialogue trees are incredibly branched and loaded with details regarding characters, history, ranks, beliefs, magic, and status. There are also ghost recaps called Echos that Hilda can find and activate triggering flashbacks that reveal the tragic history of what’s occurring in Aphes.

Its hours of lore that surprisingly does so much to establish the world of Asterigos. An achievement in terms of the writing and contextualization of why Hilda’s actions matter as they influence the outcome of what happens to each segment of the city, summarized in brief cutaway scenes much like the closing chapters in The Witcher 3. Overall there’s this weighted consequence regarding causality and casualties, with quite a few kill or don’t kill decisions that determine your outcome in the game. With 30 hours of playtime, and 60+ hours for a full platinum running trying to finish every sidequest (which are essential for a good ending but very fetch-quest) the consequences of each action, makes it so that Asterigos has a great deal of replayibility in New Game+ mode.

In total, there are over 250 documents regarding the lore in Asterigos along with a great amount of detail taken into the design of every cobblestone, building ,and crevice in a city of interconnected areas very obviously designed off both Greek an Roman architecture and models. 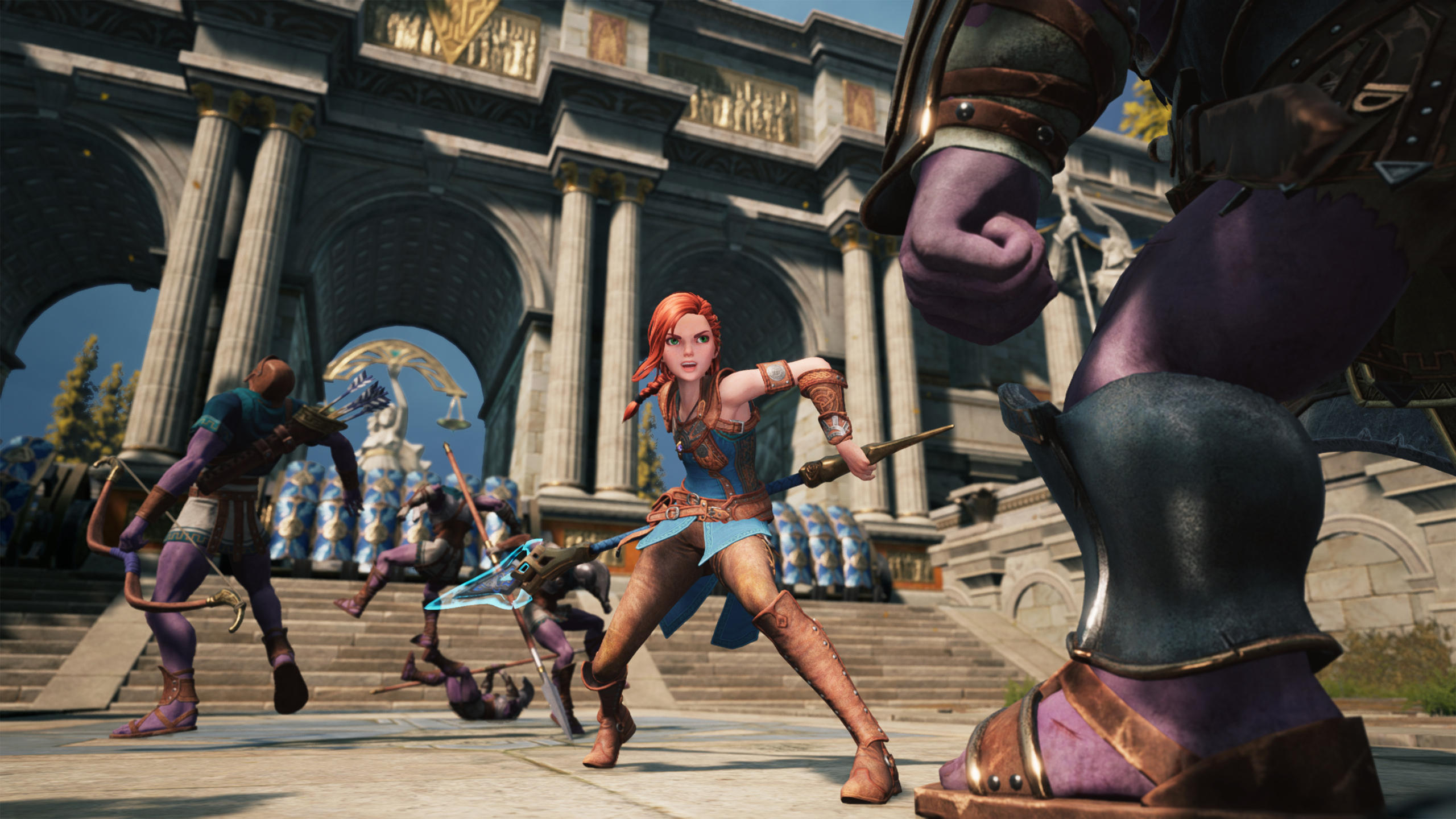 The designs of the town centers and marketplaces, the usage of crates and vases, and really the highly praised Hilda outfits (they should release more), make it for a well-design world with graphics to boot. I also think people will also like the aphisians character designs, as they’re tall and cursed with secondary mutations taking on appearance of things like foxes, wolves, or harpies humans. Though the PS5 version doesn’t do much to upgrade on a base PS4 model, the cutscenes do appear better in the console upgrade, and the people look a lot less night elfish than in the less-refined version by comparison. The details on textures also look great on a zoomed in character.

The voice acting is also pretty neat even though not everything is dubbed, just the most important scenes. However, the music in the game sometimes is surprisingly well-done and incredibly sentimental. Very reminiscent of Kingdom Hearts or Zelda to me.

With a handful of updates, visually, this could’ve visually been a modern AAA game competitor. The environment could use more intractable items and there’s a lot less platforming in the game than there should be, along with some closed off areas withheld because of an obvious lack of resources. Still, it’s incredibly worth the time to play for the graphics and design alone, even if some of the more animated portions during combat aren’t always visually smooth. 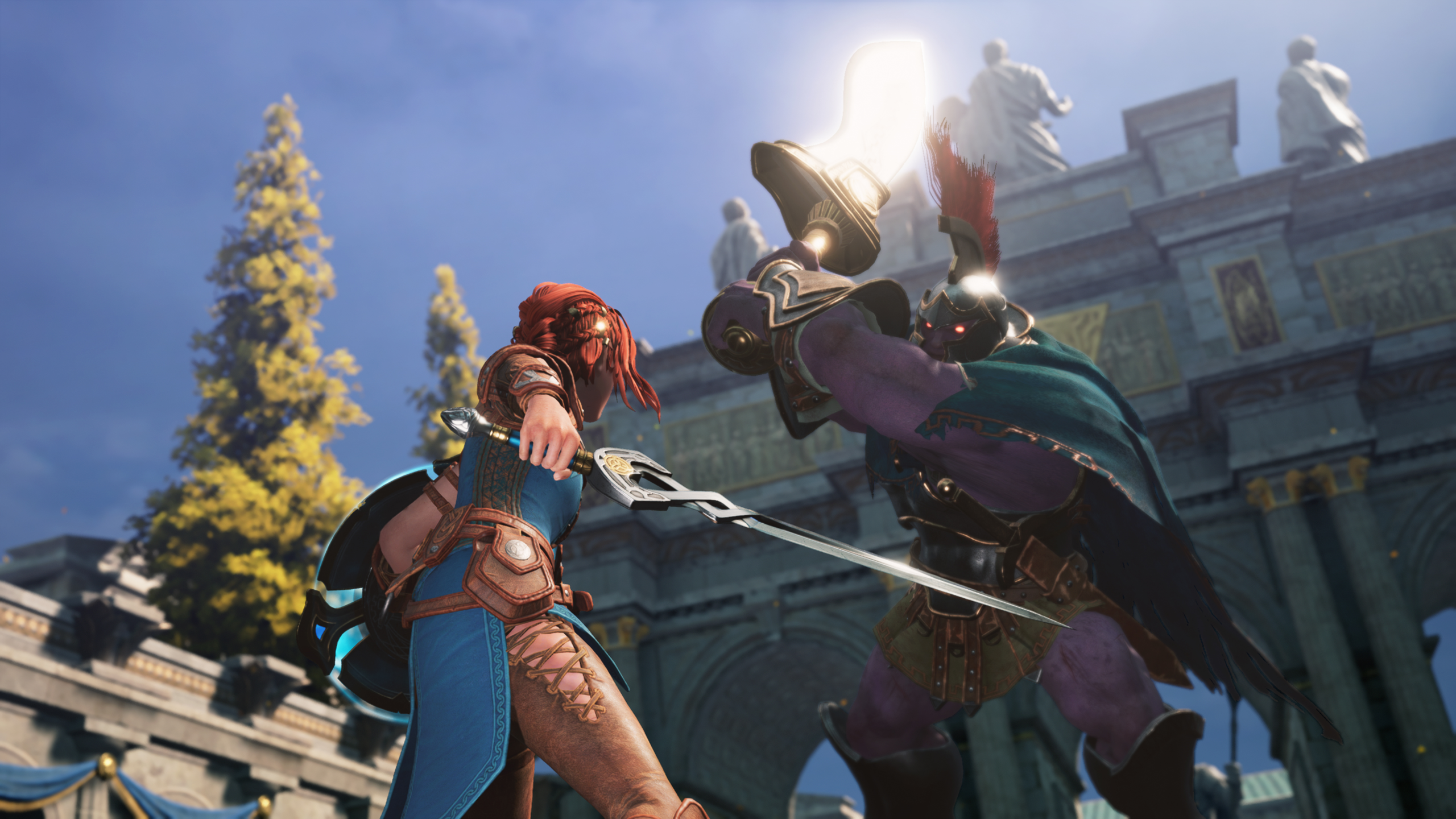 Souls-lite has been the popular comparison for Asterigos: Curse of The Stars as it’s essentially an easier-version of a Souls game. Though one with a much lighter penalty where all that’s lost in 10% of your stardust (the currency in the game) whenever you die in combat. The ‘save points’ where you respawn are stone-like structures called conduits, that when registered with a single touch, Hilda can use as a location to teleport back towards.

You can also choose to rest at a conduit which fully restores health, but that also, restores all enemies which get placed back on the map. It should be noted that one benefit to having conduits be both healing and respawn is that you can easily farm materials from combat in the game. 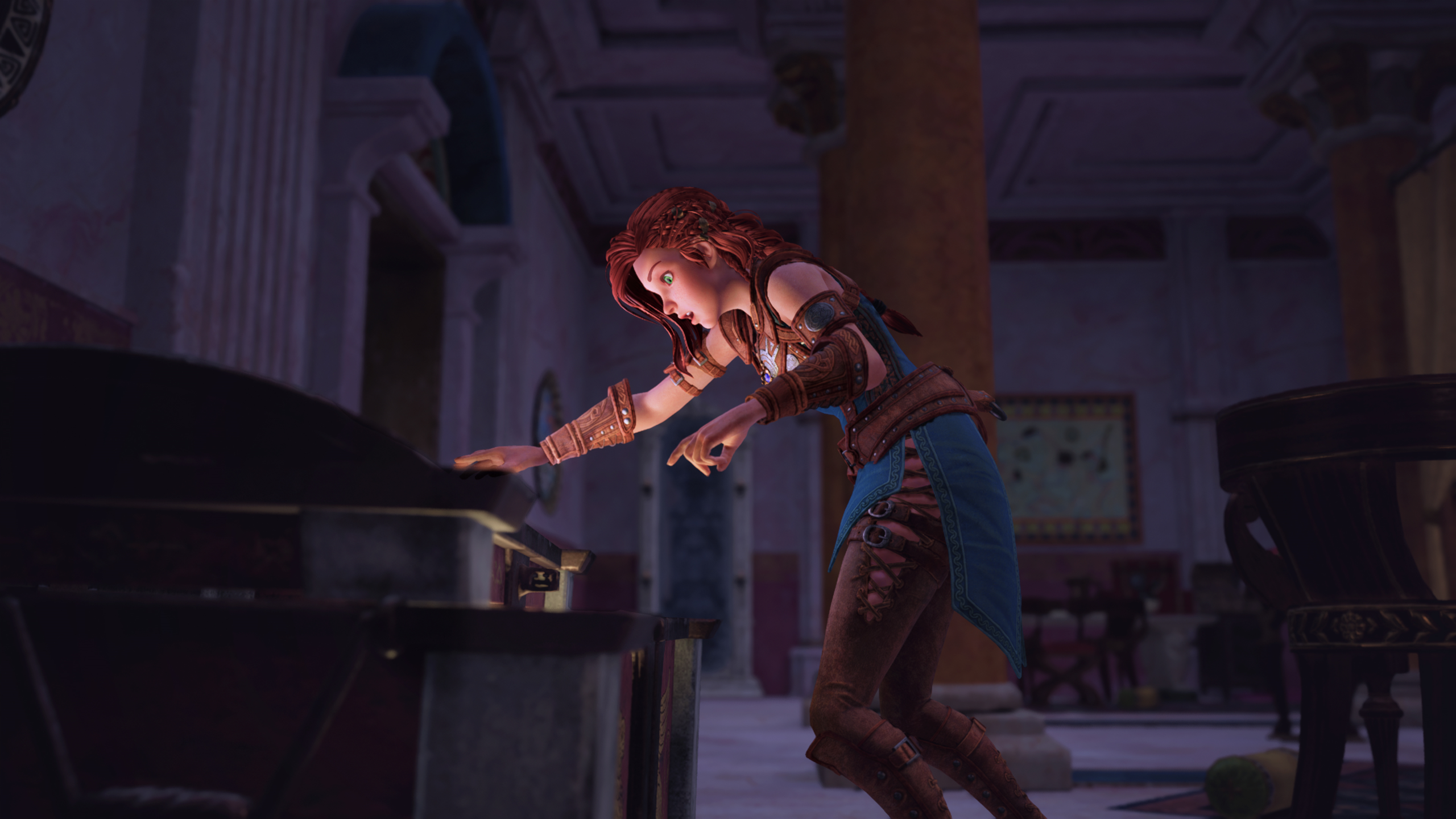 Asterigos itself feels incredibly diverse with slums, a downtown, sewers, and academy. It’s easy to underestimate just how big it is, not just in size, but in design as traversing always can lead to many pathways and areas. There are also, so many little trinkets and treasures find, along with a plethora of doors to knock-on to check-in on NPCs and trigger side quests. If that wasn’t enough, there are also 122 treasure chests littered across the entirety of the game, many of which, are hidden but contain necessary materials for upgrades.

Getting lost is sort of an intentional design choice as it’s indeed a gorgeous city with plenty to enjoy whose designs look like an actual segment of Rome or Italy. The problem is the game is definitely missing some in-game radar or map for guidance and lack of a ping system, which while not included in Souls-games, still feels like a disservice here mostly because objects in room layouts aren’t as diverse as they would be in a AAA-sized title, so it can get confusing. To make matters worse, it takes forever to run one end of town to the other, so those stones to teleport really will matter as the more overwhelming lost characters can get as Hilda… especially, when it comes to side quests where you’re fetching back and forth. The best thing about Asterigos: Curse of The Stars is it’s combat system, which feels super advanced for a first-title of a studio. You can fight your way through 60 different monsters and encounter 22 unique bosses, each with scaling difficulty depending on difficulty mode. The boss battles in the game are easily the most enjoyable element to them, as each have unique patterns, and there are a ton of them in this game (which when defeated, unlock some achievement trophies if you’re into that). Making matters more complicated though is that some perks will also make others weaker, making character design key to victory (though there are potions where you can reset and reallocate your points but they are expensive).

Speaking of which, Hilda has an assortment of six different weapons for her to try out. These are all upgrades great for empowering weapons damage up to 10. The armor though, may be debatable depending on play style because complex as the specials are in the game, the dagger-dodge does make you invulnerable for a brief second and the sword/shield, seems to protect Hilda from most attacks when her guard is up.

A breakdown for each weapon: Hilda’s Shield and Sword is a rounded choice of both attack and defense that can block all sorts of blows and stab/slash back in return. All for a very balanced approach. Then, you have the magic staff that can send balls of elemental damage or use a sort of beam-snipe mechanic to strike enemies from afar. The hammer decimates shields, spin-damages and causes knockback, while Hilda’s gauntlets that do a lot of area of affect magic combos and sets mines for an enemy to trip on. 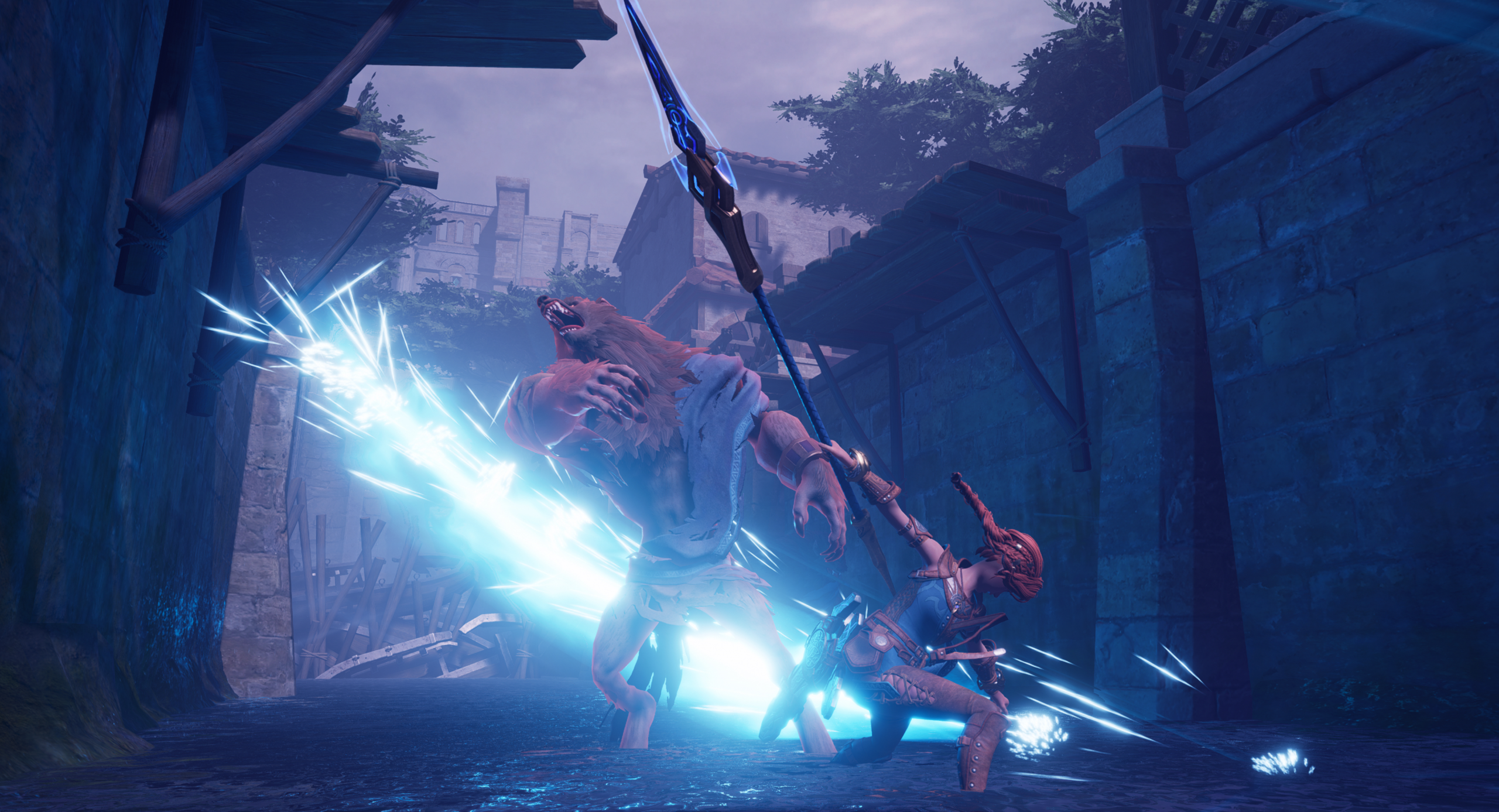 A visually cool-looking speer can parry and counter enemies blow-for-blow so long as you time it right. Then there’s everyone’s favorite: the daggers, which makes Hilda a slicing and dicing combo machine with speedy strikes, and a brief invulnerability dodge that can combo into a multitude of slashing combos. All of these weapons mind you: can be elementally powered-up at a whim in the game once the right items are unlocked.

I should stress, most combat encounters are executed with 3-4 hit combos. What’s nifty that makes the game unique,  is that depending on what two weapons you have equipped (can only use 2 at a time), you can actually switch the style seamlessly into the other for fascinating combinations, which when executed correctly, allows for different power finishers. For instance, Hilda could be firing a series of fireballs with her staff but then switch into her shield mode for a stunning shield strike to daze an encroaching enemy next to her. Or, a very popular combo, is to run in stabbing with a dagger multi-hit combo then transition to the magic staff, whose finishing blow not only does a ton of elemental damage, but also, pushes Hilda backwards effectively retreating against an enemy for massive DPS hit-and-run tactics.

The leveling system is an experience-based one that’ll see Hilda gain 1-2 attribute points along with a talent point per level gained. Attribute points can boost precision (damage), constitution (HP), or arcane (skill damage and AP recovery rate). Talent points can be used to unlock Hilda’s Talent Disk skill tree. You can also beat up bunny creatures for to unlock Morning Star Elixir, potions that give you bonus attribute or talent points.

Asterigos: Curse of the Stars is an amazing achievement of a game that’s well worth its price of 34.99. There is also a surprising lot of lore to get lost in, easter eggs to find, and storyline scrolls to read that it’s rather easy to lose hours in all the fun this game has to offer. Atop of this, the best thing about the game are its boss battles, which are challenging though not as punishing as a full-on Dark Souls kind of game. Apparently, there’s also a difficult-to-achieve glorious ending making replayibility of this game very high for fans of adventure RPGs.

With Great character. Great story. Great gameplay. This is one you should grab if you have time.

@theworkprint
Follow
Previous article
‘F.A.R.M System’ Comic Review
Next article
The Peripheral Episode 5 Review: What About Bob? What About Our Story!

A review of Asterigos Curse of The Stars‘Asterigos: Curse of the Stars’ Review - More Like Princess of War meets Souls-Lite