‘Arrow’ Review: The One Where Oliver Goes Domestic

If you thought that I was harsh when it came to reviewing The Flash’s season premiere, you might be disappointed in my review of Arrow’s return venture. It’s not that “Green Arrow” is a horrible episode. It has a lot going for it. There have certainly been worse Arrow episodes. I’m only harsh in the same way a disappointed parent would be: I know that Arrow can be so much better.

When the episodes starts we’re treated to sweet, domestic moments between Oliver and Felicity. Or as the internet calls them, “Olicity.” This one ship I can’t sail on. There are so many reasons they don’t work for me, chief among them being Felicity is too good for Oliver, but I won’t go into that rant on the first review. For the time being, I can grudgingly accept their romance. Felicity does her damnedest to be good at the suburban life, even trying her hand at cooking (and wasting) several omelettes. (Uhm, Felicity? Where are all of your omelette good bits? The bacon? The mushrooms? The peppers?) Oliver cheerily tells her she has “failed this omelette” and 2 minutes in, I’m already rolling my eyes. Oliver starts making his own omelette because he’s Oliver and he’s perfect at everything. Seriously, Felicity. You know who would have eaten that omelette and not been such a dick? Ray Palmer.

Okay, I said I wouldn’t get into this.

Things aren’t so upbeat in Starling City (is it Star City now?) but that doesn’t mean they’re lacking on the cringe. Diggle, Laurel, and Thea are out fighting a new group of organized thugs who have been dubbed, “Ghosts.” Thea is kind of adorably excited to be fighting the baddies. Guys, how am I supposed to take this show seriously when Diggle is running around with a Dollar General knockoff of Magneto’s helmet? Is that is STRAP in the back? Can a dude get a costume that was MADE to fit him? 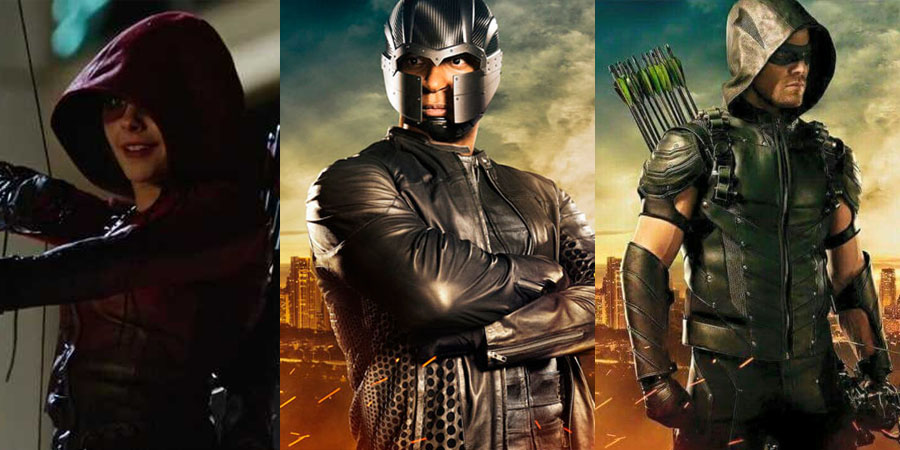 But Thea’s costume looks cool and thank someone in that costume department that Laurel dumped the stupid blonde wig that made her hair two shades lighter.

Can we please have a frank discussion about the costume situation over at Team Arrow? I’m willing to suspend belief as much as the next person, but come on. Eye makeup and hoodies are good enough for everyone EXCEPT Diggle? Naw, dawg. They might recognize the only black dude in all of Star City. Back of his head is okay to be uncovered though. I realize there’s talk of him becoming The Guardian and I’m so excited for him to have a bigger role (he deserves it), but this in-between costume is atrocious.

Back to the review.

Things are bad in Star City. The Ghosts have threatened the lives of the city’s leadership (four people?), Dum Dum Dugan is parading around as a bad guy in the wrong comic book universe, and Diggle doesn’t want to talk about his feelings. Laurel and Thea go to Oliver for help and after throwing a tantrum, he agrees to be the Arrow BUT JUST THIS ONE TIME. Then it’s back to brunch with mimosas. He gets to the Team Arrow headquarters where Thea tells him they have no evidence or data on the Ghosts and he’s like, “What kind of B-Team operation y’all got going on down here?” That tidbit is made worse by the fact that we learn Felicity has been working with Team Arrow on key issues. Felicity, I know you have organization skills, filing cabinets, external hard drives in your purse, don’t play me like you don’t have evidence on these fools after 5 months. 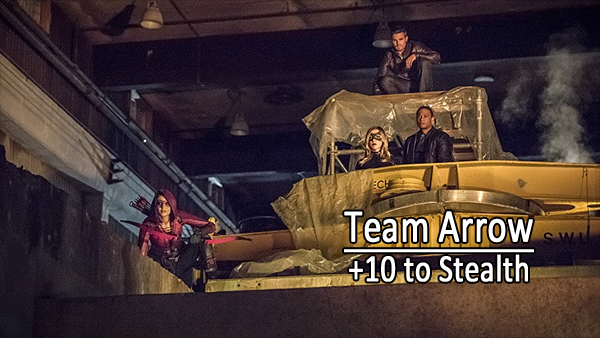 Diggle and Oliver have a moment and in about 13 seconds Felicity is all, “I hacked their website. They stole bombs. Teehee.” Yea, definitely how that works, you guys. Team Arrow goes super undercover to the last known location of the Ghosts’ stolen bombs and what do you know? Buck Compton is giving an inspirational speech to his Foot Ninjas, I mean, Ghosts, in which he kills one of them with superhuman powers. Oh, wait, I’m sorry. With mystical powers. He’s not a metahuman, guys. Oliver knows. He’s seen things.

This is why people hate you, Oliver, you smug, beautiful bastard.

Star City Police Department, the best of the best when it comes to police work, decides to sweep the station for bombs. With people there. Look, I’m no expert when it comes to bomb threats, I’m certainly no Irving, Texas police officer, but shouldn’t you… Oh, I don’t know, evacuate the site of a potential explosion? I mean, it’s 5 minutes until kaboom hour and Laurel and Papa Lance are like OH SHIT WE WERE SUPPOSED TO GET THESE PEOPLE OUT OF HERE. Things really have gone to shit in Star City without Oliver.

There’s an anticlimactic fight on the train in which we learn that one, Oliver totally needs to be doing more of those special pull ups and two, Neal McDonough is none other than…Damien Darhk. Dun dun duuuuuuuuunnnnn. Oliver blows up the train, causing zero damage to the buildings near the rail because they’re protected by the same masks Diggle wears for protection.

Speaking of Diggle, he gives Oliver an impassioned speech about how he should have known better than to think that Oliver could love and trust someone. Oliver wants to be all, “Well, I almost proposed to Felicity so what now? WHO’S THE ONE WITHOUT FEELINGS?” But instead, Oliver, sigh, gets on TV to tell the world he’s the Green Arrow. That whole speech was like if Batman just showed up and was like, “No, no, no. I’m not Batman. I’m Blue Batman. You see? WE ARE TOTALLY DIFFERENT.” Are you kidding me? Okay, you know what? You just got half a grade knocked off for that nonsense, Oliver. 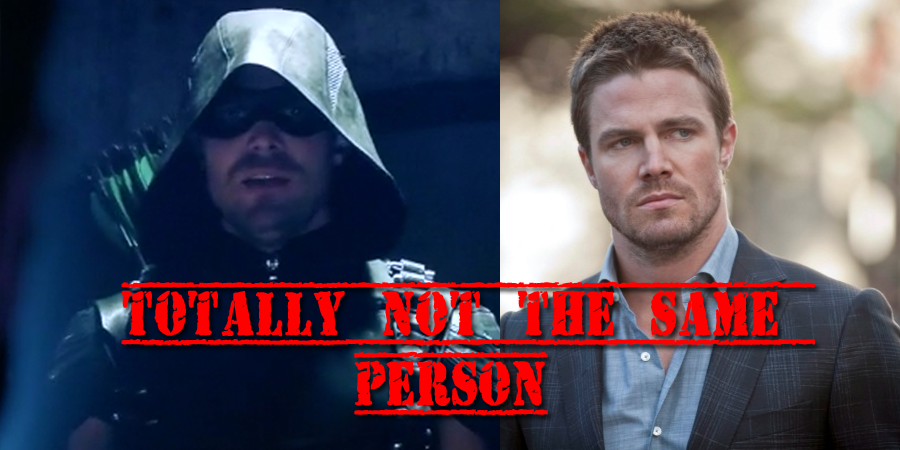 You know who else has upped his nonsense game? Papa Lance. Going over to the Darhk side? What kind of influence could Damien possibly have over him? I am interested in learning that tidbit.

Meanwhile, in the past, Amanda Waller tells Oliver to embrace his “darkness” (groan) and sends him back to Lian Yu. I want to like the flashbacks but in recent seasons they’ve tried too hard to be existential and poignant and revealing about Oliver’s character and instead they are 30 seconds of blah. Maybe if they weren’t only a minute each they’d have more of an impact on me, but personally, they fall flat.

THEN we’re treated to a trip forward in the timeline. Six months from now, Oliver is at someone’s grave. Barry Allen shows up. Late. God, Barry. Would it kill you to be on time for once in your life? We don’t see the gravestone, presumably because the CW gets off on withholding.

Arrow airs Wednesdays on the CW at 8pm EST.