For a moment, it looked like Agents of Shield might be moving away from the Inhumans. There was a mixed reception to their inclusion last season and with Lash and Lincoln both dead and Daisy on the run, it felt like they were moving on. “Uprising” goes a long way to remind you that the Inhumans are still important to this world. Agents starts with a terrorist attack that is being blamed on the Inhumans, but the actual terrorists are revealed to be Watch Dog.

Watch Dog has been upgraded. New weapons, new toys, and a laundry list of Inhumans. Yo-Yo’s finds herself on that list. While visiting a friend for her wedding, the terrorists attack the party and demand for the Inhuman to be turned over. Yo-Yo tries to help, but when her friend realizes that she is the Inhuman, she backs away from her like Yo-Yo’s a monster. Just when things look bad, Coulson and team rush in and help Yo-Yo clean up the bad guys in one, of two, pretty cool fight scenes this episode.

The conflict culminates with Yo-Yo trying to explain to her friend that she’s is still a person. The friend casts her aside and wants nothing else to do with her. As disheartening as that is, the fact that Watch Dog has access to the names of registered Inhumans is a problem that will probably stick with the show for a while. 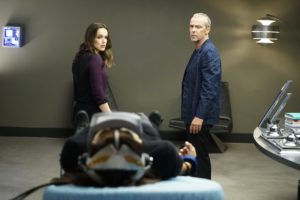 May’s story line has been less than stellar so far. Having been touched by a ghost in the premiere episode, May went full-blown crazy last week. This week, we find that the end result of the ghost touch is death. With that in mind, Simmons takes May to Dr. Holden Radcliffe. Together they deduce that what is affecting May is fear. Holden’s brilliant idea is to kill May. The idea is to reboot her like a computer. Kill her, let her mind reboot, and then revive her.

As you might expect, that doesn’t go well. When it’s time to revive May, the power is lost. Simmons is beside herself. Without power, there is no way to use the defibrillator to save May. Just when Simmons thinks there is no hope, Holden steps out of the room and returns with a glowing green item. He tells Simmons that is a power source that he has been working on, but in the rush to save May, no further questions are asked. What the audience knows is that the green item was Aida’s heart. You have to imagine that Gemma will be very intrigued once her emotions are back in check. 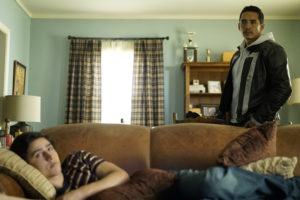 Ghost Rider didn’t make an on screen appearance in “Uprising,” but we get to know Robbie and Gabe a little better. The last episode ended with Robbie and Daisy riding off into the sunset. To this point there still isn’t much clarity into what Daisy is doing, what her mission is, why she has turned her back on the team, or why she is so intrigued with Ghost Rider. Bad news is, none of that was really addressed in “Uprising,” either.

What we do get is a great moment between Robbie and Gabe, a very good street fight with Daisy and Robbie, and then a heart to heart conversation between Gabe and Daisy. This episode, for Robbie, was focused on building his character and his relationship with Gabe. This is something that is very close to the source, as the Gabe and Robbie relationship is the heart of the comic. I think Gabriel Luna is killing it as Ghost Rider. I’m so glad that he joined the team.

When we met the New Director last week, he explained how important it was to get the public’s favor before announcing that Shield was back. He was worried about the “optics” of a rogue Inhuman and former Shield Agent named Skye. Jeff is very worried about the public perception of Shield and stressed to Coulson how important a win is for the team right now. When it’s all said and done, Coulson and Jeff share a great moment where Jeff isn’t ready to go public yet because it’s not part of the plan. Coulson then shares some wisdom that he learned from Fury, “It’s important to know when to throw out the plan.” 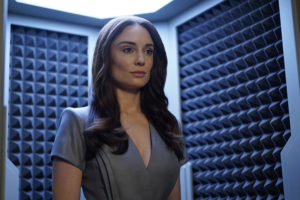 Three episodes into season four and I feel Agents of Shield is only getting better. The war between the Watch Dogs and the Inhumans is sure to be important. There is a ghost threat that is causing fear in victims. There is still much to learn about Ghost Rider. Shield is back. Those are just the basics, there are much deeper hints for what this season has to hold from Aida, to Mack and Yo-Yo, to Jeffrey Mace. Uprising was a high point for me because I love good characters’ moments and this episode as full of them. You can tell that Uprising will act as the catalyst for what’s coming next.

It’s worth mentioning that the stinger on the show leaves us with Sen. Nadeer speaking out against shield and the Inhumans. She then answers a call that appears to be from a Watch Dog and said that she’s at her brother’s house. As she walks out of the house, the camera pans to her brother who is encased in stone as if he were exposed to Terrigen Mist. The immediate conclusion is that he was affected by the mist but has yet to come forth. However, we don’t know of another case where an inhuman has been encased for this long. There is little doubt that the lady who is at war with the Inhumans will have a sibling Inhuman before this is all said and done.

What did you think about Uprising? Any clue who the ghosts are or what they are after? How do you feel about Aida? What Inhuman do you think is teased at the end of the show? Let us know in the comments.