A Discovery of Witches Season 3 Episode 5: A Christening, A Kidnapping, and a New Scion

In this week’s episode of A Discovery of Witches, the stakes are raised even higher as Matthew and Diana openly challenge the covenant and the Congregation by holding a christening for their twins. Meanwhile Benjamin goes from bad to worse as we learn that he has been kidnapping witches. 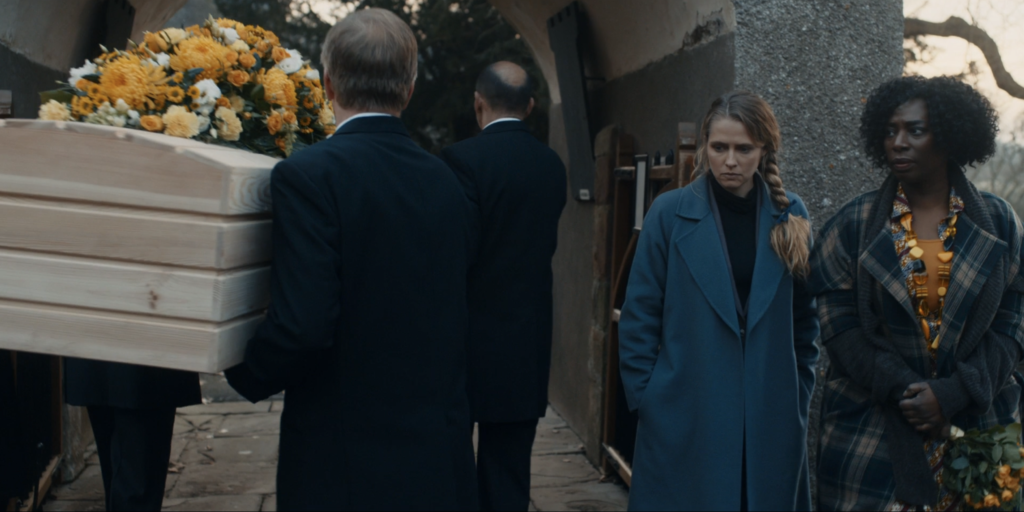 TJ Weston is Laid to Rest

After suffering at the hands of Knox in episode four, TJ Weston died with only Diana and Agatha there to mourn him. The witch apologizes to the daemon for what happened with Timothy and acknowledging that Agatha is their only truly ally on the Congregation. Diana doesn’t want the twins and Margaret to become targets and the christening is their way of rejecting the covenant. The other woman says that the historian better make sure that it works.

Matthew, Diana, and their allies head to Sept-Tours for Rebecca and Philip’s christening and Ysabeau tells her son that this event will be viewed as an act of war. This will be the time when they’ll learn who their true friends are. The geneticist tells his mother that he has invited Baldwin even though the other man has still refused to recognize his scion.

Meanwhile Sarah has gone to visit Diana’s Temple to leave flowers for Em. While there she feels the other woman’s presence and a golden butterfly greets her in the light. It’s a beautiful moment and hopefully provides a small measure of comfort for the witch. It must be extremely difficult to return to the place where Emily had been killed.

Later on, Diana and Marthe are in the kitchen as poor Rebecca appears to be hungry again. The new mom reveals to the vampire that the baby keeps throwing up the milk though Matthew thinks that it’s too soon to worry. The housekeeper wisely says that Diana is her mother and knows what is best for the little one. Perhaps it’s not milk that she needs. Soon after upstairs, Matthew and Jack smell fresh blood and Matthew rushes downstairs where he sees his wife feeding Rebecca her slit wrist.

He asks Marthe to leave so that they can have a private conversation and he is angry. Matthew tells her that there is a reason that children are not made into vampires because you cannot reason with a two-year-old in a killing frenzy. He is worried that Rebecca has inherited more than just vampirism from him and Diana says that she can spellbind her child if needed. Matthew though doesn’t want what her parents did to her done to Rebecca. The witch adamantly defends her mom and dad, saying that they needed to do what they had to and that she appreciates that now more than ever. Diana also adds that if the children inherit blood rage, then they can teach them to control it the way Philippe did with Matthew. He apologizes and says that his action was uncalled for.

With Marcus and Phoebe also present, we learn that Miss Taylor is thinking a lot about their future. She asks him when will she become a vampire and he promises that they’ll talk about it after the christening. Looks like she wants a forever and ever type of commitment.

On the big day, almost everyone comes to attend including Miriam, Chris, Fernando, Hamish, Ransom, and Geraldine. Missing though is Gallowglass which is understandable given the circumstances. Everyone heads to the chapel where the twins are baptized by the priest and then Sarah performs the naming ceremony. We learn the full names of the babies for the first time: Rebecca Arielle Emily Marthe and Philip Michael Addison Sorley. It’s another touching moment as the elder witch realizes how Diana wanted Em to be a part of this day.

Suddenly though Baldwin appears, and everything gets heated real quick. The humans and children are quickly ushered out as chaos erupts after the head of the de Cleremont family demands that the twins need to be brought to Venice for assessment. Matthew asks his brother once again to recognize his request for a scion and is still denied. The two end up battling it out with Diana giving her husband support. She ends up displaying a great deal of elemental magic as she calls upon witch wind and witch fire as she tells Baldwin to end this or she will. He relents and she says that if any member of their scion is unable to control their blood rage she will spellbind them without hesitation. He asks what if her magic fails and Diana answers that then their scion would have failed. They would then submit to the Congregation.

This seems to soften Baldwin up and he agrees to recognize Matthew’s scion. Before departing though he tells his brother that the other vampire is now solely responsible for everyone he has sired and those sired by them, including Benjamin. Their sins are now his sins.

Sarah asks Diana in the aftermath why she didn’t use her weaver spells earlier with Baldwin and her niece comments that there would have been one that she would have used if her brother-in-law didn’t see sense. She reveals however that this was the tenth knot, the final knot of creation and destruction. Diana felt its power and believes that once she makes the Book of Life whole again, her own magic will grow even stronger. Goody Alsop’s prophecy foretold that old worlds would die and new ones would be born, that’s the battle they started today. 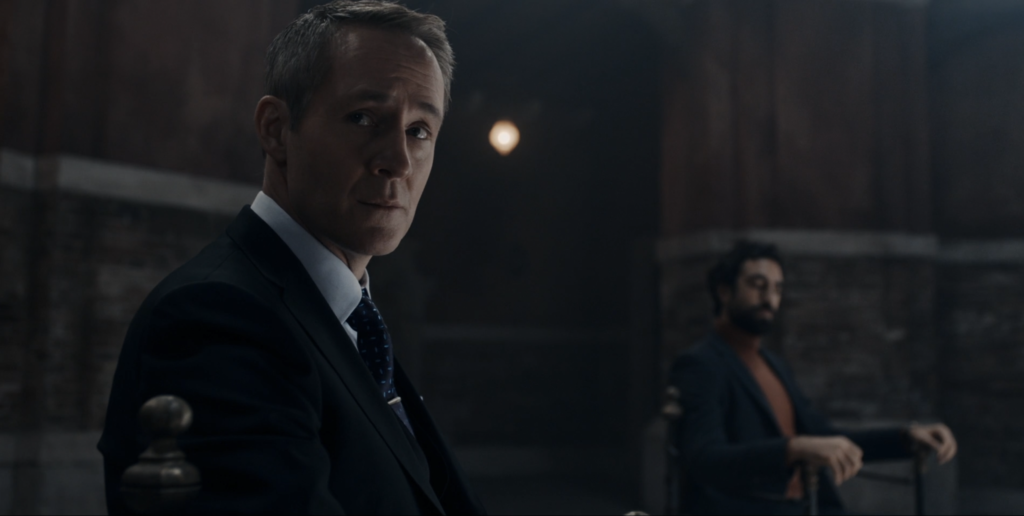 It’s Been Busy in Venice

Before departing for Sept-Tours, Baldwin spoke to Gerbert about the christening of his brother’s children. He told the other vampire that he would not kill the twins but would want to have them assessed. The other man seemed quite stressed out about the children of a formidable witch and a high-born vampire as being too powerful and could expose them all to humans.

In his return, the head of the de Cleremonts called for a meeting to discuss the events in France. He informs them how Matthew, Diana and their scion used the christening to break the covenant. Gerbert catches that last part and asks if Baldwin has legitimized the scion with the other vampire saying that his brother’s life is going to be more difficult as he is now responsible for the crimes of everyone in his clan. Domenico follows up with his own question as to whether the blood rage vamp has been dealt with. Baldwin once again gets political and says that it won’t be an issue any longer. When pressed he reveals that Diana will spellbind him if needed. Satu chimes in that she is a disgrace to do that to any other creature with Agatha commenting that sure that is better than being sentenced to death. The daemon adds that she understands Matthew and Diana have a relation with the boy and so surely, she would not have made that decision lightly.

Gerbert steers them back towards the topic of the children and asks when they will be brought in for review. Agatha is appalled that they would countenance the abduction of children with the vampire saying this is more of a quarantine while they assess their threat level. The daemon argues back that they aren’t weapons. Gerbert though uses the moment as an opportunity to seize power as he claims that the Congregation no longer has the discipline to counter Matthew and Diana’s campaigns. He claims that the vampires have no choice but to take these matters into their own hands.

Benjamin seems to have left Venice and moved on to Germany where he kidnaps a witch named Lena and takes her to a very run-down building in Poland. She is kept chained to a bed while the vampire does horrid things to her. But it seems that she is not his only prisoner as he proceeds to torture another woman Lena is able to use her magic and escape. However, Benjamin has allowed her to leave so that she can run to Matthew.

She makes her way to Sept-Tours and tells Matthew, Diana, Marcus, Sarah, and Ysabeau her story. Lena warns them that Benjamin wants to open up the truth about witches and one with the power of life and death that would let him control everything. He also apparently wants witch children and that he was infatuated with Diana. When Matthew asks her how she knew to come here, she answers that Benjamin talked about Matthew making him do these things but of course she didn’t believe him. Lena wouldn’t be here otherwise.

Matthew determines that he needs to find the other vampire and end this once and for all. Marcus says that they need to strengthen the Knights of Lazarus to protect the scion. He thinks Chris, Sarah, and Jack should join with Diana chiming in that so should Miriam. Lastly, the twins should be made members as well so that any harm to them would incur the wrath of the whole order.

Once alone, Matthew takes the jacket that Lena came with and pulls something out of the pocket. It’s a Cartier watch and when the camera zooms in, we see the inscription: To Philippe 1922. So this was Benjamin’s jacket and he had been wearing that watch before taking it off to torture the other woman as Lena escaped. This is a clever move by the vampire to bait his sire with the knowledge that he was somehow involved in Philippe’s death. 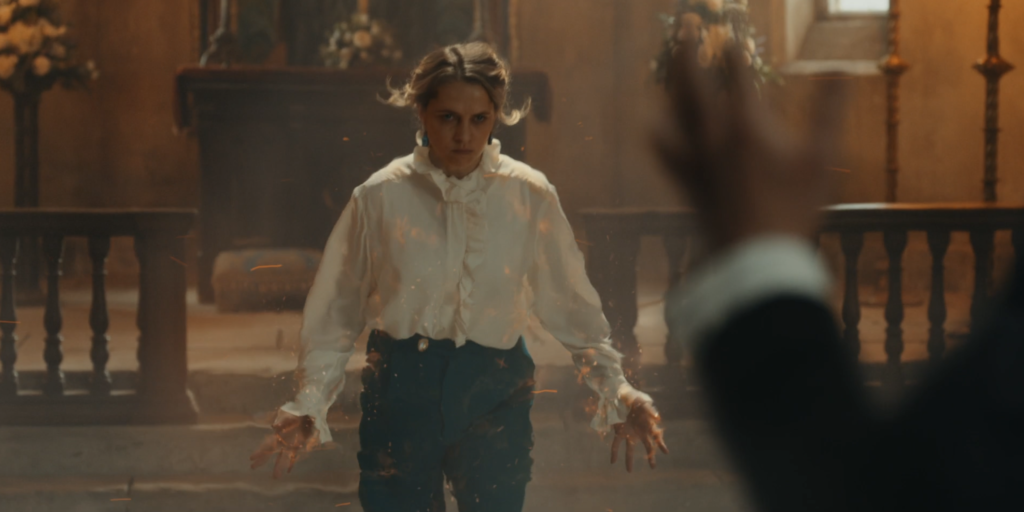