A Discovery of Witches Season 3 Episode 4: The Last Missing Page is Found

In season 3 episode 4 of A Discovery of Witches, the hunt for the third missing page from Ashmole 782 is on, Diana goes into labor, and the cure for blood rage proves to be more complicated.

Diana, Phoebe, and Sarah continue their search for a mysterious figure named TJ Weston. They believe that he has the third page torn page from the Book of Life, however he/she has been proving very difficult to find. Diana tells her aunt that she’s been working on a locator spell to speed things along, but they would need a witch for each individual element to perform it. Phoebe asks if magic is a good idea because Peter Knox might come sniffing around. Unfortunately, time is running out and they need to find this page stat.

The two witches along with Gallowglass head to the part of London where Goody Alsop used to live, and Diana casts a quick spell to reorient herself. Soon after a woman appears, and she welcomes the time walker home. They are taken to a room where a small group is waiting to aid them.

Diana reveals that she’s trying to make the Book of Life whole again and that she needs their help to find someone named TJ Weston as they believe holds the final missing page. With four other witches assisting, the locator spell works, and they get exact longitude and latitude coordinates.

When Gallowglass, Sarah, and Diana meet TJ Weston in the flesh, they discover that he is a daemon who is living in isolation. The man’s home is packed with all sorts of items, and he appears quite erratic. Weston is not fond of vampires and so Gallowglass opts to wait outside. He also insists that no magic is performed inside his home. Diana tries to explain why they need the page in his possession, but the daemon is unwilling to give it to them. As it’s made from the flesh of his ancestors, he feels less alone in the world with their presence nearby.

Diana doesn’t want to force Weston to give it to her, so she leaves him peacefully and heads to seek help from Agatha Wilson. The daemon agrees to accompany her back to Weston’s home and the two women try again to ask him to relinquish the page. This time it works as Weston is surprised that another daemon is helping a witch. Agatha is genuinely concerned to see a fellow creature in so much distress and loneliness. She says that she’s here for him and he is not alone anymore with an entire daemon community that will help support him.

Unfortunately, Peter Knox had been skulking around London trying to discover what Diana is up too. He manages to trace her magic to the London coven and uses his own power to discover TJ Weston’s address himself. He then makes his way there, but is too late as the daemon had already given Diana and Agatha the page. Weston is later found by Agatha on his dying breath surrounded by a circle of salt. This is awful and Knox needs to pay. 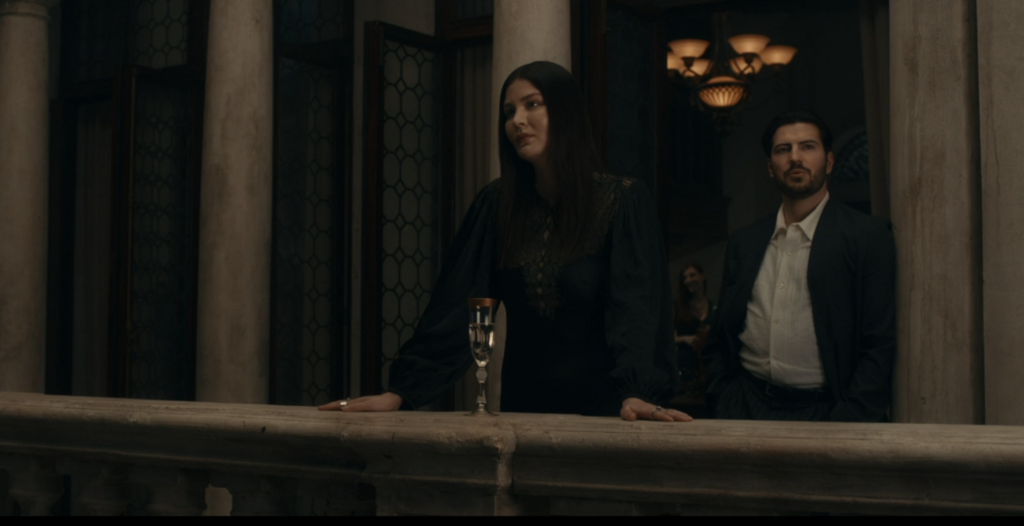 Benjamin and Satu Have a Moment

At a swanky party hosted by Gerbert in Venice, Satu attends and as soon as she sees the older vampire recites a line of prophecy that a lot of creatures seem to believe is about Diana. Gerbert surprisingly tells her to just lighten up and enjoy herself for once. Also in attendance are Domenico and Benjamin, clearly these two do not like each other.

Benjamin goes off and talks to Satu who is outside in the balcony. He hoped that she would reconsider his offer to join him, but the witch is determined to find and battle Diana on her own terms. I can respect that, but she also seems super fixated on the notion that everyone thinks the historian is the witch of the prophecy. She explains to Benjamin that she looked inside Diana and while the other woman does have a lot of power, she doesn’t have any control. Satu keen to make the vampire aware that she could be that supremely magical being.

The Complications of Blood Rage

Meanwhile, Chris theorizes that something in Matthew’s non-coding human DNA reacted to the new vampire DNA that flooded his system. Miriam then flies to New Orleans to tell the geneticist the news personally since Matthew has been neglecting to pick up her calls. As she explains their findings on how the trigger for blood rage could reside in an individual’s human genes, the impact is massive as there could be no cure.

Matthew is already feeling taxed after finally convincing Ransom last episode that he felt utter remorse for killing so many in Marcus’ family. He eventually contacts Baldwin to ask for his brother’s blessing in forming a new scion. Unsurprisingly, the head of the de Cleremont family refuses the request.

He had been reluctant to return to London but finally does so once he hears that Diana is in labor. Matthew makes it back in time and aids in the birth of his twins, Rebecca and Philip.

Throughout the season so far Fernando has been trying to convince his mate’s son that he needs to walk away from Diana for his own good. That continued this episode, with his insistence that the other vampire also deserved his own happiness. Gallowglass was still reluctant as Matthew was off in New Orleans bringing Marcus’ side of the family into the fold and so he likely still felt that he had to protect her during this time.

He finally reveals to Diana when they visit TJ Weston that he had been watching over her for years after Philippe asked him to look out for her until Matthew came into the picture. She is distraught that the older vampire had no right to ask that of Gallowglass. But he says he did it gladly and when she tries to apologize, he tells her not too. The man knew that she was never meant to be his. Cue the tears rolling down my face because he is trying so hard not to shed his own in this scene.

Once everyone returns though for the birth of the twins and most importantly that Matthew was back, he realizes that the other vampire would never leave Diana’s side again and so he exits. This was such a sad scene to watch as Gallowglass quietly slips away with everyone celebrating the newest members of the de Cleremont family.