This question is finally answered in an episode that gets down and dirty with zombies, angels, and a steamy and unsuspecting moment of love.

Wow. So let me begin by saying after covering the season premiere of Wynonna Earp last week, I began researching just what in the Earping world I was going to talk about for this week. When I saw this tweet by showrunner Emily Andras noting just how bonkers cray-cray this week’s episode was supposed to be: 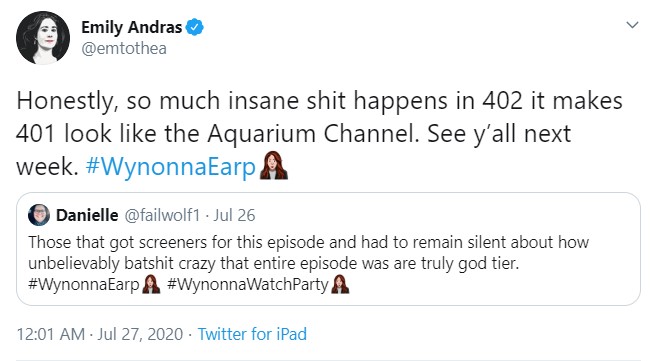 Surely enough, it didn’t disappoint, as my jaw hit the floor like a Looney Tunes character over this week’s ending. Causing every one of my Surprisey-Senses to tinkle (Yes, tinkle, not tingle, as in: wow that episode was so insane that I may have peed just a little).

And so, like many of Wynonna Earp’s reckless and entangling romances, this review will be short, silly, and to the sex… er… I mean point. As we talk about the two biggest reveals of this week’s episode:

And so, without further ado, let’s get right into it.

What’s in The Garden of Eden?

So early on in the way-hey-days of Season 2, officer, and now currently Sheriff of Purgatory, Nicole Haught, found the ring of Bulshar, a magical device that’s taken us on a journey of sorts. A three-season long epic that led us to the Garden of Eden and Bulshar’s reveal as the demonic snake from the creation story.

It’s here, where Waverly and Doc try and stop an impending… thing. The thing that the good guys here (Aka the guardians/Angels) kept at bay for ages, with Waverly feeling responsible to protect humanity in this one, much like her father before her.

But how have they (we’re assuming they is Black Badge) spent years helping to keep it confined? Well, by feeding the machine-human blood of course! But in this big doozer of an episode, we reveal last week’s arrival of the very naked Nicole (who stands adjacent to a tree this entire episode. Hint. Hint.) is not our beloved Waverly Earp’s Haught-in-Shining Armor Pants but is actually…

Eve. Yep, as in Eve, from the story of Adam and Eve, except this one is also a demonic figure-changing doppelganger. Just what was Bulshar’s relationship with Eve as the Snake from the Garden of Eden desperately wanted to liberate her? We won’t fully know. Though it appears she’s totally evil. And though she’s admirably karate kicked in the face by our good old Doc Holliday, I doubt this is where the story ends given how much has been built up around this story.

So… um. Yeah. Let’s be honest, the REAL takeaway from this episode is Doc and Wynonna’s rekindled love affair. Doc Holiday passes the ‘Punch The Real Person’ test, not by tricks, but by sharing their innermost secrets only each other would know, which, logically, should be Wynonna and Doc’s lovechild, Alice. But, in hilarious Wynonna fashion, this ends up not being about their baby, but rather, their mutual sexual safe word in the bedroom (I believe it was Hollywood. With the follow-up being: Honky-Tonk).

So, yay! Doc and Wynonna are a thing again… Or at the least, open to kissing and likely banging one out every-now-and-then. Aka: Normal.

But more importantly, to add to this lovefest is the celebration of WayHaught tying-the-knot! The real Nicole (not the almost-naked for the entire episode Eve-Nicole) implies saying yes to Waverly’s marriage proposal. And wow… was it steamy… and limb twisty… O-facey. Really, just a purely physical expression of love times ten, because I don’t think I’ve ever seen that graphic of a lesbian lovemaking moment on the series. It’s a beautiful celebration of a love that fans have been cheering now for years, brought together in a moment of passion, which I’m sure Earpers will be talking about — much like that lovemaking scene — for a very long time…

But thoughts? Opinions? Or cheers of sheer delight? Feel free to comment below.