Earpers rejoice, Wynonna Earp is back and on the road to kick some serious butt on the path to Waverly in season 4. Review Inside.

Warning this review will be filled with spoilers. You can see our full coverage of Wynonna Earp yesterday for Comic-Con@Home SDCC 2020, right here.

Well, this has been a crazy journey to renewal. After a two-year break and some fears of cancellation, Wynonna Earp is back and more badass than ever. Because sometimes you just want to see sexy people kicking butt.

In season 3, we saw the death of Bulshar, revealed that Peacemaker was the flaming sword and key to the Garden of Eden, and ended the Earp curse. Actions effectively ending the Revenants for good but also removed Wynonna’s status as heir (and in the process left sacrificed Peacemaker). Though it wasn’t all drama, as we saw Wynonna get sweet and kinky with some angel booty. Wynonna took her headstrong recklessness to new heights by redefining the term: Electra complex, by sleeping with her sister, Waverly Earp’s angel daddy. Not unlike her mother before her.

Oh, and Wavery is a Nephilim (half-angel) Who, despite beginning the end of times, proposed to Nicole in order to start their own little lesbian paradise together. A happy ending, unfortunately, broken up by Waverly’s capture by the Garden of Eden itself. Where after being abducted by tree vines, Doc Holiday, now a vampire, went off to her rescue to follow and bring Waverly home.

The gang now split. The town of Purgatory: disassembled. Wynonna stands alone in her quest to find Waverly. With no peacemaker. No vampire or angel baby daddy. No friends. And no Earp legacy. Though she does find help in former Ex-sheriff Nedley. Which is where we left off while entering this new season.

Wynonna Earp is On The Road Again

One of the things Wynona is fantastic with are the one-liners and banters. Jokes that get me up and arms in laughter, which is exactly more of what this season delivers. After a typical arming up montage, where Wynonna seeks to use anything in sight in order to replace Peacemaker, she goes off with the Ned formerly known as: Sheriff, to find Wavery’s mystery stairway to Eden. Where she drops this little bomb:

This is, of course, right before flopping and failing in typical Wynonna fashion that mixes confidence with clumsiness. It is the kind of comedy that makes you love the show and reminds you what we’re getting into: funny gunslinger girl adventure hijinks. Anyway, we soon learn there is a dude named Valdez, who left his name on the Earp house wall. Revealing that the others were abducted by some black-ops agents, after Wynonna drugged them at the kitchen table to go on her solo-quest versus Bulshar. Wynonna finds some leads and then solo-quests to find Waverly, where thankfully, she runs into… “Haught pants” (Nicole).

This is very much a Wynonna and Nicole episode. A severely overdue adventure where two strong and incredibly hot women (their words. But also, mine) save the day. Wynonna Earp style. Together, they go on a quest to find Valdez, hoping to find another door to Eden. A backdoor if you will (again, Wynonna’s words not mine). And even though Peacemaker is gone… Wynonna and Nicole sure do know how to kick a lotta butt. They break into a facility and are ambushed by some sniper, as Wynonna saves the day… by relying on her friends, like Nicole. All while dropping some more hilarious one-liners:

Anyway, after Nicole incapacitates the sniper, she admits being angry at Wynonna, having been roofied by her best friend (Aw). Wynonna admits she never had a best friend (Aww). The girls makeup. The sniper is revealed to be a child, a girl named Rachel, who just happens to be the daughter of Doctor Gloria Valdez. 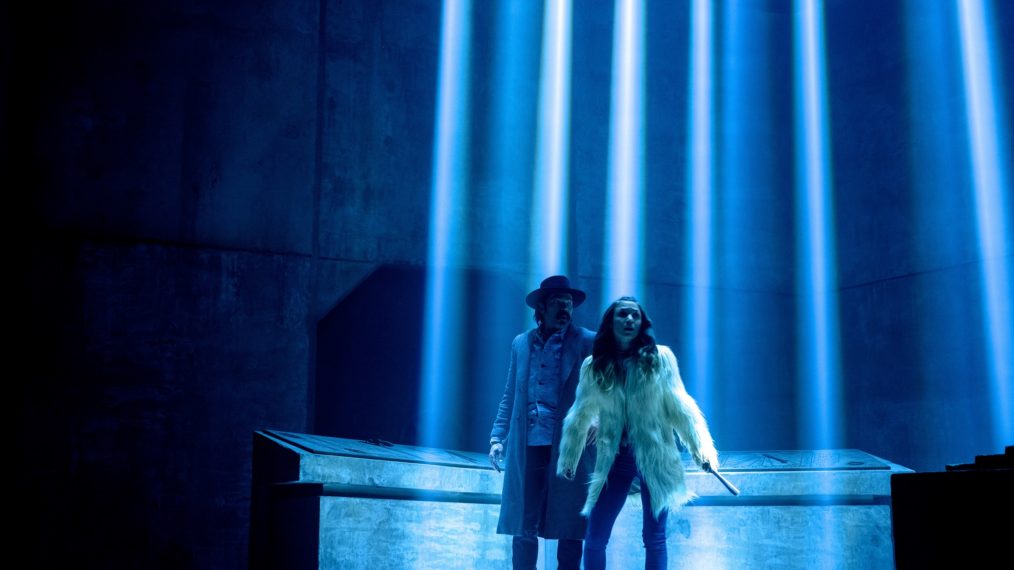 Waverly is both rescued and then inevitably stuck, with Doc Holiday in the Garden. Together, they find her angel father’s seat but seek a way out. As the paradise is less garden and icy puzzle level. Finding the only random building, they find a mad man scientist, who has revealed the secret to keeping something at bay is with some human blood. He then gives himself the worst self-cut haircut that would make Sweeney Todd proud. Thankfully, Doc Holiday takes the when life gives you lemons approach, and they bleed the scientist dry given that a celestial and vampire won’t cut it.

Time passes. And Waverly and Doc are revealed to have been stuck a long time. Lost as to how to escape Eden, Doc seems to be forgetting what’s going on. As Waverly is soon losing herself too. Whatever is happening is making them lose themselves.

As a result, Waverly offers a bit of her angel blood to the machine, which oddly enough, then grows a Lilly pond after offering her blood. She’s given 4 choices which she has to pick, apparent journals with the names of the people she cares about on the covers, including Nicole, Wynonna, Doc, and herself.

Back in the lab, we find gassed scientists and dead people everywhere. Wynonna, eventually descending the lab and looking for more, can’t help but take the aggressive approach, trying to blow a gated door with dynamite. Revealing some riled up mutant-zombie scientists. In the chaos, we see Wynonna, Nicole, and even Rachel go on a zombie killing spree, stopping only when Wynonna steps on a grate. The same ones that Rachel warned never to step on. Fearing for her newly professed bestie, Nicole pushes Wynonna off and falls into a black pit herself.

This leads to an awkward morning where Doc Holiday wakes up to find a beautiful tree sprouting beautiful pink flowers. Randomly, when Doc goes into the building to check the machine, he finds not Waverly, but Nicole. Naked. Surprised to be there but happy to be close on Waverly’s trail.

Here’s the Recap one last time for those behind

I’m gonna try my best to keep these light and sweet. First, let me say, I’m not really this show’s usual demographic, as I’m neither a lesbian, or a woman. I’m just a guy covering Wynonna Earp because it’s fun. It’s SYFY. And it’s probably one of the few shows on TV that balances lighthearted adventure with low-stakes drama.

That said, I dig this cliffhanger and want to figure out why Eden is evil. I also, have a huge crush on Waverly Earp, as should any human with a pair of eyeballs and brain. And even though I rushed to catch-up this season, I gotta say, as someone who does nothing but write and consume stories for a living (and barely a living at that…)

This was pretty dope.