Note: We don’t discuss any of the major spoilers for Wynonna Earp.

We’re in the home stretch of Wynonna Earp’s freshman season and ho boy has it been a wild ride. I went into the show with low expectations and came out the other side touting it as one of my favorite shows of the year. A lot of that is due in part to the fantastic actors on the show, including Kate Drummond, who plays Agent Lucado, a hard-nosed, by-the-books agent in the Black Badge division. Essentially, her job is to boss Dolls around and make him feel bad about his “drug habit.”

I had the opportunity to talk to Kate about her character in Wynonna Earp, what it’s like being on such a female-driven show, and I tried my best to tease spoilers out of her for the finale.

A few things about Kate because I’m nosy and these are the things I ask about in interviews: 1. She swears nearly as much as I do and that should make everyone fall in love right off the bat. 2. She’s also a voice actor and has also done work in video games like The Division and Splinter Cell: Blacklist. 3. She was a teacher before becoming an actress so she’s basically a trifecta of smart, sugar-sweet, and vulgar. 4. She said I was a great person, so we have that on the record, INTERNET.

Agent Lucado is an awesome character to play. As a member of Black Badge, I think some people view Lucado as an enemy. Maybe she is, but I guess it’s all in who you’re rooting for. She’s popped in for a few episodes, to sort of piss in the punch bowl, so to speak.

Emily Andras said it really well: Lucado is your “company gal”, keeping all the checks and balances in order, keeping things professional and by the book. Well, by her book.

Of which she probably has several.

Yes, definitely. Depending on the day of the week. It’s so hard because we’ve only seen a snippet of her and I don’t want to give away any spoilers.

I won’t tell anyone. This is a private conversation between friends. And Twitter.

What can you tease about the show’s finale? I will try to not get you into trouble.

I am so tempted to go BLAH and spill but I can’t. I’m so afraid to spoil and then I’d have Melanie Scrofano all over my ass. And no one wants to get on her bad side. I’m just kidding–she’s a sweetheart.

As Dolls’ supervisor, I think Lucado’s sort of this looming presence over Dolls’ shoulder. She’s ambitious but she’s not unlike every other character on the show. Lucado has a broken past that is heavily guarded by her strength of character. In the finale we see a lot more of her and we start to understand how complicated the history is between Lucado and Dolls. It’s more heavily implied that there is this competition between them in that she got the promotion, he didn’t. I’m not sure I can say much else.

Can we expect big battle sequences? Are we going to finally learn what the deal is with Dolls’ yellow eye situation? I need more, Kate.

I think you’re going to have the rug pulled from under your feet. Is that the expression? You might get the wind knocked out of you a bit. It’s not a twist, per se, it’s just that some characters are finally brought to their breaking point.

Is that character Agent Lucado?

Tease. But for real, between just us friends, if Waverly dies, I’m revolting.

I haven’t said anything about a death. I’m just saying that the season finale is RIDICULOUS. I can tell you that it’s going to make that cry for renewal even louder. I can’t say anything more. You’ll have to get me drunk first. That’s when I spill the secrets.

Okay, note to self: Get Kate drunk and hide her from Melanie Scrofano. Got it.

Well then, tell me about the end of the season, in the least spoilerific way possible.

As the season comes to an end–I’m so sad I can say those words–we start to understand more of where Lucado comes from. She’s a real character who brings a lot of baggage to the table. And as I’ve said, there’s an encounter in the finale that elaborates more on that history. 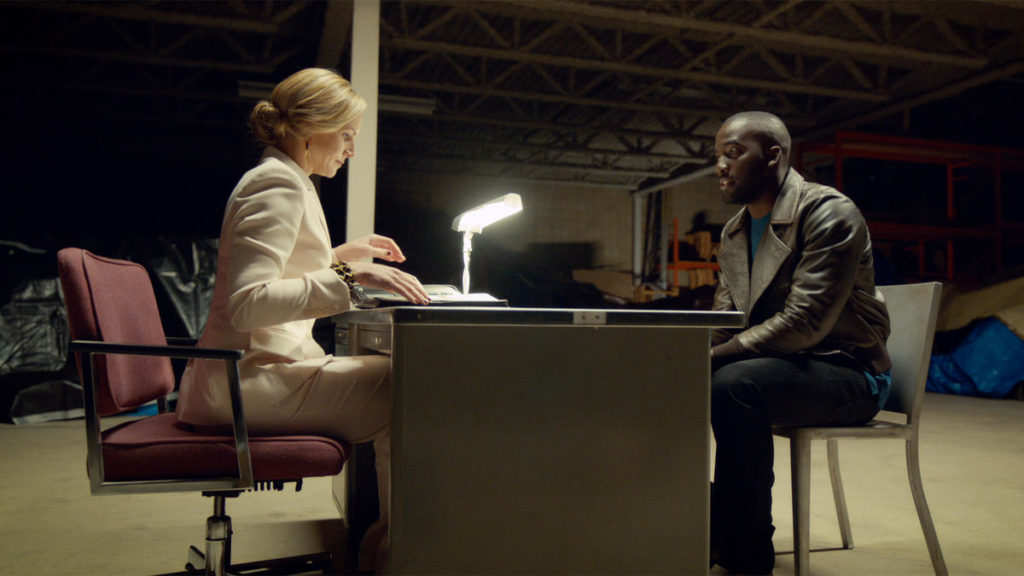 I loved playing the role. I hesitate using the words “strong woman” because I love playing real women; women who speak their minds, who are intelligent, who have no issue standing up to any gender, male or female. I love when there’s no shyness of asserting oneself and I especially love when there’s a backstory that gives my character a reason to stand even taller in their foundation. Lucado embodies a lot of this for me. I feel like her brokenness is heavily guarded by this strength she shows.

And how is it being on a show that is just littered with these real female characters?

It’s such a freaking honor. You know, it’s funny. Sometimes women scare me in real life. We’re all so complicated and when you get a group of them together you never know what’s going to happen. But I love the fact that this group of actresses are so closely knit and fighting for the same thing. They all want to tell the most truthful story and to represent their characters as best they can, while also giving props to each other constantly. This is such a solid group of people that I feel ridiculously honored to be a part of it. I love this show; I love supporting it; I love seeing these relationships develop; I just love seeing women do well. For me, it’s just such a huge honor to be one of MANY in such a huge group of real women.

Emily Andras said on Twitter that even the bear from episode eight was a female, so it’s definitely awesome as a fan to watch a show that touts itself as being part of “casual feminism.” I love it. Even with Agent Lucado, you can sense that strength in her, especially when she intimidates Dolls, who doesn’t seem like a man who gets put off guard easily.

It’s a really cool position for me to be in, too, to be able to reverse the dynamics a bit with the woman taking power and adding to that, this sort of sarcastic condescension toward Dolls is really fun to play. It’s awesome because you want to cheer for all the women in this series. There’s something relatable about all of them. I think that the writers created such solid, real characters, that the audience has quickly identified with at least one of them on the show.

Yes, and it’s up to us as fans to prop up these shows with the characters we love, to give them the spotlight they deserve so that hopefully more like it will follow.

Yes! And the fans have been fantastic. I’ve sat in on some of the live-tweeting and I’m so grateful that the audience has been coming out and vocally supporting the show. I don’t think Wynonna Earp is a show that’s just about “rah rah feminism”. I think it’s a show that finally grasps the concept that women can be in lead roles and carry a show and do it in a fucking amazing way. I think that’s what this show is. It’s not boys vs. girls. Look at this ensemble! It’s built of men and women, of all different sexual orientations, and they all kick ass in their own way.

What else have you got going on right now, Kate?

I’m about to film the next two movies in the Flower Shop Mystery series on Hallmark Movies & Mysteries as Nikki Bender. They’re really great family friendly movies with strong female roles. I love being a part of the series. On top of that, a video game role I can’t discuss right now. But hopefully soon I can add Wynonna Earp’s second season to that list.

AHA! So if you hope to be in the second season, your character is still alive by the end of the finale!

OH JESUS. YOU’RE TOO GOOD. It’s funny because I sent Emily Andras an email beforehand and said, “I’m going to be interviewing today so let me know if there’s anything I can’t say. Speak now or forever hold your Peace…maker.”

And that’s when Jen coined the phrase, “Speak now or forever hold your Peacemaker.” YOU HEARD IT HERE FIRST.

Wynonna Earp’s season one finale airs this Friday on Syfy at 10pm EST.