‘Outlander’: “Vengeance is Mine” And Revenge is Sweet

This week on ‘Outlander’: Claire once again makes use of her “poor, hostage English woman” routine and a few old friends return.

Spoilers through Outlander 211: “Vengeance is Mine”. It’s getting to final few episodes of the season, so if you aren’t caught up, now’s the time!

After the victory of last week’s “Prestonpans” battle, things are a bit more solemn for the Frasers in Outlander’s eleventh episode, “Vengeance is Mine”. The Scottish Jacobites have won nearly every battle in the north without running into the main forces of the English army and because of how easy the fight has been so far, Prince Charles’s generals are suspicious of pushing forward into London, uncertain they could hold the city, even if it is only 5 days away. Jamie protests this act passionately because he knows that once the Highlanders withdraw from their well-earned territories, it signs their death warrant at Culloden. Yet, he’s alone in the knowledge of the future and the Prince’s general decide to exile him, his passionate mouth, and the rest of Lallybroch’s forces to Inverness, where they will be used for supply gathering. 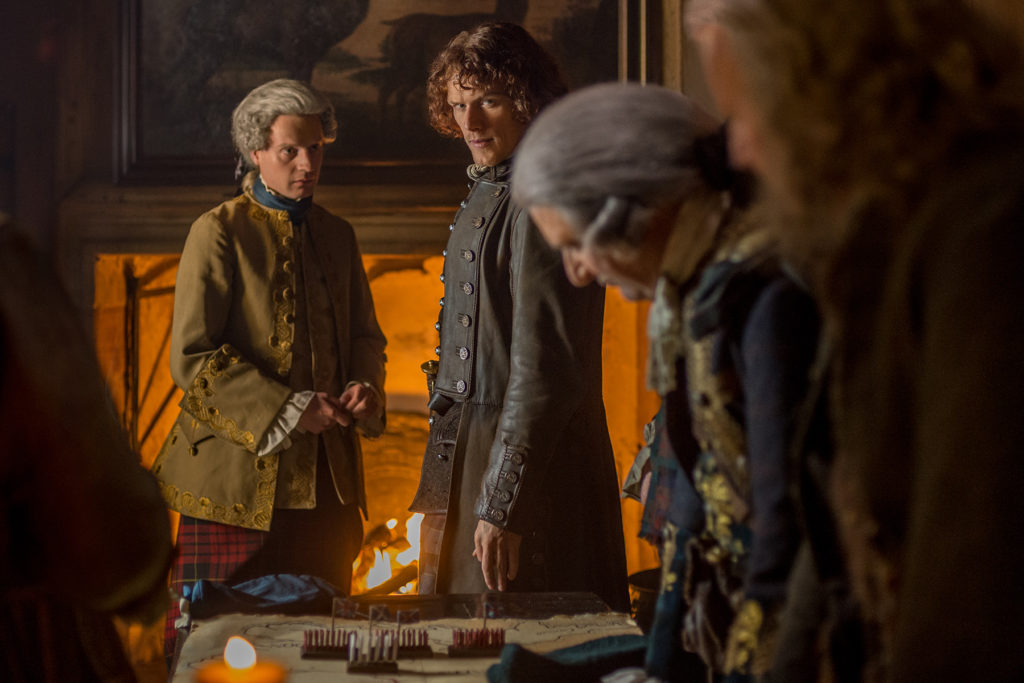 And so the group begins their journey north again, with a beleaguered Rupert definitely missing his toothless best friend, Angus. I’ll be honest, I never held much stock in either character; they were sweet and protective with the best intentions and I adored their fondness for Claire, but seeing Rupert without Angus is heartbreaking. He mentions him almost every time he speaks, to both strangers and friends, and it’s like watching a pair of lovebirds separated from their mate. He doesn’t quite know what to do with himself. Fighting is his purpose now, and that’s a dangerous road for him to follow.

On the road to Inverness, the Frasers are set upon by a group of redcoats who follow them through the woods, managing to hit already grief-stricken Rupert in the eye with a musket ball. After some trickery with riding around through the woods, they manage to escape and find sanctuary within an abandoned church. Claire tends to an injured Rupert and manages to save him, making a quip about a pirate patch. I love these moments in the show where Claire not only gets to show off her smart tongue, but hints that she’s still very much an outsider. Her swears and references to tetanus shots and pirates are all welcome additions that add so much to her character.

However, their peace in the church doesn’t last long as the redcoats manage to track them down yet again, leaving them trapped in the church with the threat of either surrendering or being burned alive. Every character defaults to their go-to reaction in this sort of situation: Jamie is ready to surrender himself to save the others, Dougal is eager to fight, even die, and Rupert just wants a stiff drink. Claire, naturally, makes use of her English heritage, and plays the “I’m a hostage” card, yet again. I mean, I’m not one for messing with a winning routine, but at some point that trick is bound to fail right?

Much to Jamie’s dismay, everyone else agrees to Claire surrendering herself and he can’t even take her out himself because he’s Red Jamie, the highlander with a price on his head. Claire pretends to faint and pulls the damsel in distress card and then rides off with the redcoats. Jamie and Murtaugh follow close behind while the rest of the group makes for Inverness.

Once in town, the redcoats feed her, but then tell her they’re taking her a house in Belmont where she’ll stay until they can figure out just what to do with her. Since Jamie won’t know where she’s going, she begins to panic, only to run into Hugh Munro, the old mute friend of Jamie, who she subtly tells to find Jamie.

Once in Belmont, Claire realizes she is at the home of the Duke of Sandringham and it’s quite the uncomfortable moment between the two. There’s no love lost between them, both shrewd enough to realize that they’ll never fully trust the other. The Duke confesses he’s essentially being held under house arrest due to his Jacobite sympathizer tendencies. And because of this, his home is now a pit stop for the redcoats, where they can do as they please. To ensure his loyalties to the crown, the Duke has also promised his goddaughter, Mary Hawkins to a Mr. Granger, as part of the bargain to prove he is not a Jacobite. But the Duke confides that he wants out of the house and if Jamie is going to rescue Claire, he had better rescue the Duke as well. So when Claire sends a message to Jamie, she conceals it in Gaelic (the best she can) and sends it off with a messenger to find Hugh once again. 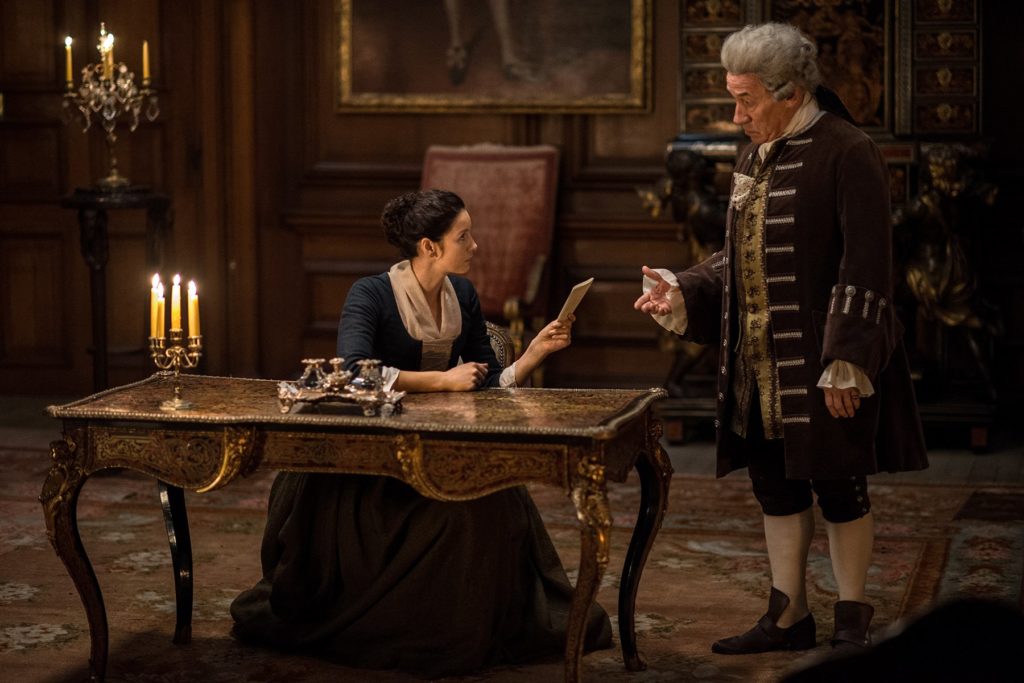 Mary Hawkins is happy to have Claire back in her life. She doesn’t want to marry Mr. Granger and she, too, wants Claire to find a way to get her out of the arrangement. After an encounter with the Duke’s servant, Claire recognizes the birth mark on his hand and realizes that the Duke was the one responsible for Mary’s rape and the attempt on Claire’s life. The Duke tries to explain it away as a simple misunderstanding, that he was only meant to scare the girls enough to pay back his debt to the Comte St. Germain, but Claire is buying any of the bullshit he’s peddling. She tries to escape but the Duke locks her in her room.

Mary later comes in and Claire explains that Jamie rescuing them is a trap, meant to benefit the Duke. Mary helps Claire escape to the kitchen, but unfortunately the Duke is waiting for her. Luckily, Mary is able to get a quick message off to Munro before being caught herself. There’s a standoff in the kitchen where Claire proclaims that the Duke is responsible for Mary’s rape and Mary doesn’t take the news well. Jamie and Murtaugh burst in, as they are wont to do, and “handle” the situation. Mary, full of rage, stabs the Duke’s servant, killing him, and Murtaugh kills Sandringham, chopping at his head a bit too many times for everyone else’s liking. Murtaugh then presents the Duke’s head to Claire and Mary as an apology for what happened that night in Paris. He said that he would get revenge for what happened to them and he did. 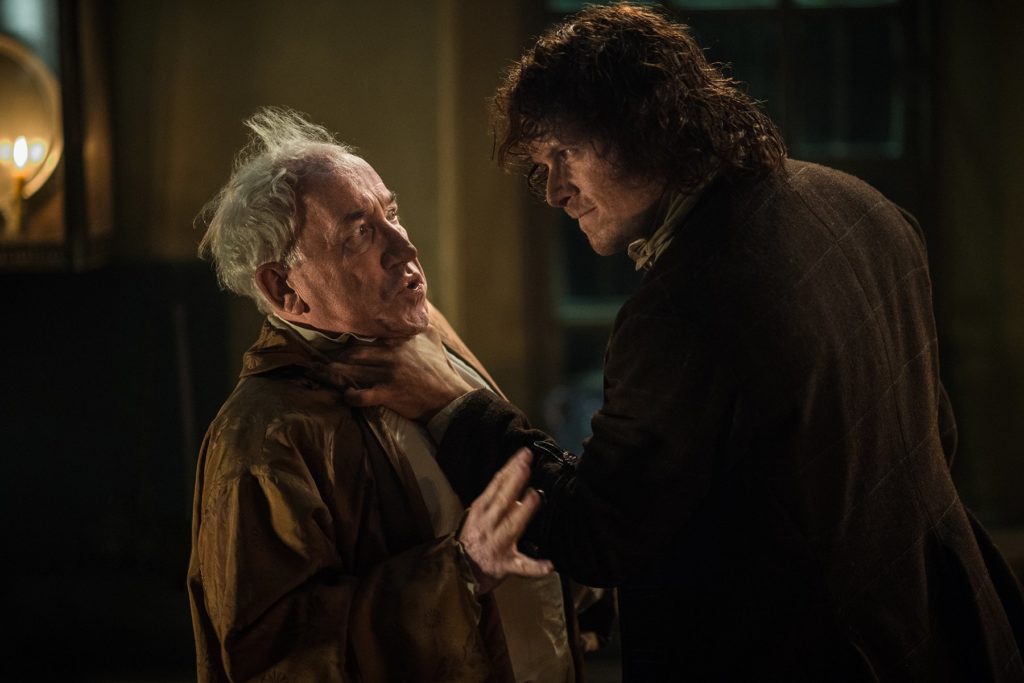 “Vengeance is Mine” is a very good episode, written by Diana Gabaldon herself. From start to finish it’s an exhilarating race that wasn’t expected, what with the whole war going on in Scotland. Simon Callow stands miles above everyone else with his oftentimes farcical depiction of the Duke of Sandringham, but he’s so good at it that you cannot help but love every moment he’s on screen. I’ll be sad to have him gone.

I’ve loved the portrayal of Mary Hawkins so far. She’s a young girl who is thrown into a frightening world of politics and arranged marriages and then she’s raped, ruining her chances for a good marriage while also halting the chance for real romance with Alex Randall. Then she realizes a man she trusted is responsible for that horrible act against her, so she takes her revenge, but it’s hollow.

The Duke without his wig was brilliant. Wonderful.

I love the tiny moments of humor in the show. Murtaugh insulting Claire’s paltry attempt at Gaelic (“She even misspelled ‘help'”) and Claire playing dentist, throwing her leg up on the bench and asking, “Right, who’s next?” Both were just such classic moments that I’m so glad we get ones like them every week. Outlander is certainly a drama, but it does have moments of genuine humor and I’m grateful for that.

Jamie praying for Claire’s safety in Gaelic was also a highlight. Sam Hueghan’s voice drops about two octaves when he speaks in Gaelic and that does things to me, but it was also nice to see how he treats Claire when she’s not looking. He loves this woman and my heart aches for their eventual separation.