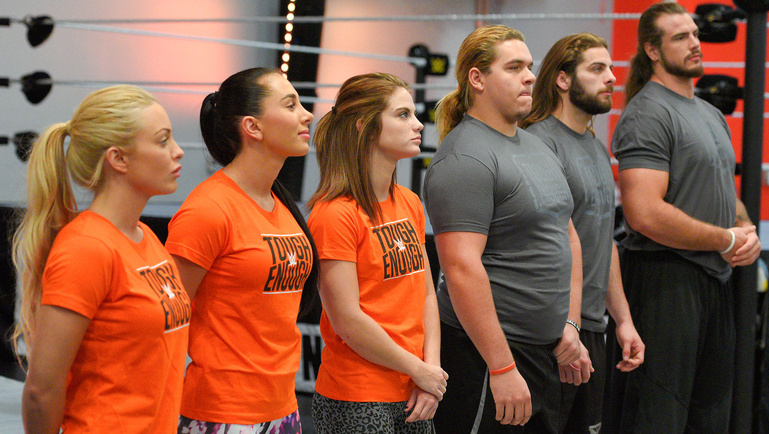 Last week, Paige pulled a Miz and saved GiGi, who nobody wanted on the show (a running theme) and this sent Chelsea home. Meanwhile, Amanda is somehow on the show with ZZ. I have a bad feeling that those two are the last two standing at the end of all this. Both WWE and who ever is voting deserve what they get after that. Anyhow, let’s steer this baby toward port…

We start with clips from RAW when John Cena got his nose bashed in. He’s on the show tonight because clips from last week don’t move the needle.

Arena
Jericho and Renee welcome us to Tough Enough and plug John Cena. Hey, did you know he’s ON THE SHOW TONIGHT?! We say hello to the judges. Daniel Byran loves Amanda because nobody loves her and he loves that nobody loves her. Paige: Josh, don’t fuck up. Miz likes ZZ but doesn’t think he can be a WWE superstart.

Barracks
Chris Jericho is waiting for the recruits in the kitchen. There are two pizzas which, to Amanda, is LIKE OMG SO AMAZING because there are “two pizzas and Chris Jericho”! They eat and share their feelings. GiGi is frustrated because she’s been “showing what it takes” and nothing is happening. Amanda bashes the others for being in the bottom three “four times” but neglects to mention that she was technically eliminated but was saved because Miz was horny. Sara says it’s awesome hanging out and hearing his stories which start at “I only won the title when I was a heel” and include other choice nuggets like, “…and then his wife told me, ‘Is that all you GOT, Jericho?'” GiGi tells Jericho that her favorite match was Lita vs. Trish. She loves the part where Lita nearly broke her neck but finished the match anyhow. ZZ liked Triple H vs. Lesnar in a steel cage at Extreme Rules. Sara loved when Lesnar beat ‘Taker at WrestleMania XXX even though it made her and everyone else sick. Jericho says that all the drama in those matches was due to storytelling. That’s what the recruits have to do. Then Jericho says it’s time to get everyone’s drink on and encourages everyone to get toxic drunk, picking up the bottle of Fireball Whiskey that nobody wants to drink because it’s complete bullshit. They do Tequila instead.

When morning comes, the recruits look hungover. Tanner is dead in bed. Jericho claps his hands loudly to wake him up, threatening to get in bed with him if he doesn’t wake. When he gets up, he looks terrible. Sara Lee says that he’s still drunk as fuck and can smell the booze coming off of him. He stares vacantly as Josh calls him a “Cabbage Patch Trainwreck”. The girls make fun of him as he sits there, staring. Finally, he speaks and says he has the liver of a champion. We’re tellin’ stories here, people.

Gym
Booker, Dogg and Lita says that stories are told in the ring with every move. Jericho gets involved with the festivities and Jericho tells her to stop smiling. The recruits are paired off to put together stories that are told in the ring. Tanner wants to do one where he pisses off GiGi by “cheating on her with her friend”. For Tanner, I’m not sure that’s fiction. Josh says ZZ is the underdog and he’s the “big guy” ZZ has to defeat. In true twist, ZZ calls Josh “the big alligator” and calls himself “the little Cajun boy” that will beat him. Amanda plays the “cocky girl” who likes to beat up “the nice girl”, then says she’s “taking charge” of this production. They work with Jericho, Booker, Dogg and Lita to finish this up. Last, but not least, the recruits are told that NXT superstars are here to watch their stories.

ZZ vs. Josh
Josh is the big, bad monster who dominates ZZ for most of the match, destroying him in each way possible until the he’s declared the winner. Yay? Booker thinks it’s good while Lita thinks ZZ needs more confidence.

Sara Lee vs. Amanda
Amanda poses until Sara knocks her down. Sara comes back with one of her own. Sara ends up winning by body slam but she won’t stop smiling. All the judges verbally fellate Amanda, however. Lita and Dogg think the smile needs to go. Booker pissed that this isn’t a game. The WWE Divas don’t do that, he says, having apparently never watched a shitty Divas match.

Tanner vs. GiGi
Jericho has to point out that GiGi’s the babyface because nobody can tell who any of these people are supposed to be. GiGi hits a mean hip toss. Tanner chickens out and goes for the ropes. When GiGi chases, he schoolboys her and wins, then bails from the ring. Booker likes what he sees but nobody really saw the story. A+ for showmanship, though.

Josh is named the big winner of the day. Worst of the day is Sara Lee.

Arena
Paige is impressed with ZZ in the ring. Bryan says that smiling’s OK but Sara has NO idea when she’s supposed to. Paige agrees. They also praise Tanner for showing personality.

Arena
John Cena is here and NOT ONE PERSON BOOS HIM. Cena thinks that Tough Enough is great because it’s one giant story about “growth”. He gives a very eloquent speech, wishing them all the very best in their journey. We waste another few minutes discussing Cena’s broken nose and whether or not he should go to SummerSlam. Daniel Bryan leads a YES! chant. Cena leaves. I’ll miss him.

ZZ thinks Tanner should go home because he has no charisma. What a coincidence: so does Tanner. Amanda wants Sara Lee gone in a Shyamalan twist.

Daniel Bryan wants to save nobody in a moment that takes WAY too long and unintentionally funny.

Not surprised and no fucks are given. She could have gone home last week if Paige hadn’t saved her for no reason to one-up Miz.

GiGi sobs into the microphone to end the show.

OVERALL: These things are a hell of a lot easier to write the more the cast is whittled down. Quick and harmless, the show’s quality to a big leap this weak thanks to the aforementioned factor.

Matt Perri is one of those literary Ronin you’ve never heard of until he shows up and tells you he’s a literary Ronin. He’s a native Californian, a film buff, old school gamer geek, and a sports/entertainment fan. A lifelong Giants, 49ers and Sharks fan, he also covers the world of pro-wrestling, writing recaps for WWE Monday Night RAW and Total Divas at Scott’s Blog of Doom. You can follow the guy on Twitter via @PerriTheSmark as well as here at The Workprint and his own blog, We Hate Your Gimmick.
@PerriTheSmark
Previous Britney Spears To Guest Star On CW’s ‘Jane The Virgin’
Next ‘Rick and Morty’ Renewed for Season 3