WWE Tough Enough: “Remember to Be the Best”

Last week, Patrick was eliminated from Tough Enough in one of the more intense moments on the show. The voting was actually pretty close. showing him to be neck and neck with Josh and ZZ. This week sees the remainder of the cast fighting for their lives. We also have a new judge…let’s find out who it is…

We get clips from last week when Patrick was eliminated and Big Show slapped everyone’s chest because reasons. Team B.A.D. is here this week.

And we are LIVE(!) from Full Sail University Arena for Tough Enough!!!

Renee Young dances around while Chris Jericho talks up the “shocking elimination” of Patrick.

The Miz is happy to be here. Paige tells him to shut up while she talks while Bryan remains as silent as a fucking Sphinx as per usual.

Barracks
ZZ makes a peanut butter & jelly sammitch in honor of Patrick. He also pours two shots of milk and puts it next to a photo of Patrick that’s next to his bed. Then he hangs his necklace made of gator teeth on the frame and, already, this is getting weird. (DANIELLE: It’s kinda cute…) Then ZZ does his milk shot and takes a bite of his sammitch and reflects on Patrick, remembering the time when Patrick told ZZ that he was pathetic and that he wasn’t going to “lose to the likes of ZZ”. ZZ: “I’m gonna make you proud, bro. I’m gonna win this.” He starts doing sit-ups, while telling the camera that he’s a hurricane now and that everyone’s gonna need “more than just an umbrella”. Then he poses like Patrick in the picture. The photo, by the way, is of Patrick in tight black slacks, shirtless and oiled down.

ZZ is working hard like Rocky. Chelsea tells him that he’s “doing well” in total monotone. Josh shows up and laughs at him. Tanner thinks he looks silly. ZZ says that he’s going to use Patrick’s elimination as a wake-up call. Mada and Josh cannot believe Patrick’s gone…but, enough about that — Amanda wants to mock Chelsea for how blonde her hair is. (DANIELLE: I hope we get a scene next week where Chelsea memorializes Amanda by bleaching her hair.) Amanda declares herself “the only blonde here”. Chelsea couldn’t look more uninterested in this “fight”.

Orlando Tree Trek Adventure Park
The cast enters the park where Booker, Lita and Billy Gunn are waiting. Booker says that this will get tougher. Lita tells them to stay focused. Gunn brings in Cesaro, who flies in on a zip line and, somehow, that fits him. (DANIELLE: I wish he’d uppercut Billy Gunn and take over for him.) Cesaro says each cast member needs to focus on their weaknesses and eliminate them. That’s why focusing is the thing this weak. So focus. Booker outlines the challenge. They all have to run to Cesaro across seven different platforms and memorize the platform numbers which are part of the combination of a safe guarded by Cesaro which contains some bullshit that should keep them all happy. Giorgia is the first one to open the thing after Sara Lee fails. (DANIELLE: That should keep Crikey happy at the BoD, methinks.) ZZ fails, Tanner nearly falls but manages to get into the safe, as does Josh. The entire thing is complicated by the fact that Billy Gunn yells at them on a megaphone. He gets pissed when they don’t respond and tells them that they have to. They still don’t but Gunn couldn’t climb a stool these days, so what’s he gonna do?

Full Sail University Arena
Jericho plugs his book. Bryan plugs his book. Renee asks about the support ZZ got. The Miz shrugs in disbelief. Paige thinks it’s stupid. Bryan thinks his Patrick Shrine was weird. Young announces that Team B.A.D. will be here tonight. (DANIELLE: Will they show up with six other Divas?)

Barracks
Chelsea, wearing the most unsexy bikini ever over her skeletal frame, gets in the hot tub with Tanner. The scene goes like this:

Chelsea: It’s really hot in here.
Tanner: (Stares off into space, looks at her) Hey…
Chelsea (to camera crew): I’m trying to pull something out of Tanner but he’s not responding. I’m trying to pull it out but it’s just not coming yet!

Tanner says he needs to learn promos. So, Chelsea tells him to “do a promo on her bikini”. Tanner sits there and looks at the water. He looks at the bikini. Nothing’s there. (DANIELLE: I don’t know what’s turning me on more: the complete lack of chemistry or the playful, goofy electronic piano music that’s scoring the scene.) After a moment, he says this:

Gym
More focusing! Booker, Lita and Gunn present the next challenge: wrestling with crowd noise. Gunn points to speakers in the ceiling which will be emitting cheers. Josh is just a badass in the ring. ZZ runs over Mada and everyone takes their lumps while Chelsea says the crowd noise is “so loud”. ZZ just isn’t able to do much at all and Mada’s sick of it. Giorgia and Chelsea go at it and Giorgia is too safe with her moves. Lita’s displeased.

Barracks
Chelsea and Sara Lee practice their lifts. Amanda interrupts. GiGi follows her lead. Amanda thinks they’ve been doing other stuff besides practicing. Saaaaaay… (DANIELLE: She’s talking about gossiping.) Eh…lemme hope. Amanda listens with her ear against the door. Then she bitches about getting caught doing it. Then it’s more squabbling while Tanner and Josh literally eat popcorn and watch.

That evening, GiGi talks to her Dad on Facetime. He regrets that she’s gone and he says that he’s worried that she won’t be back if she has her shot at fame. He’s proud of her, regardless of the outcome. They both start crying — and this is actually pretty genuine. Giorgia says she came here for this and that this is her dream.

Meanwhile, Mada talks to ZZ about his lack of performance in the ring. He says that ZZ is costing him challenges. ZZ admits that he doesn’t think he can win this thing at all.

Full Sail University Arena
Team B.A.D. is here because #DIVASREVOLUTIONALLOFTHESUDDEN. The female competitors all have to take Big Splashes off the top rope from Tamina for no real reason I can think of except that WWE is secretly hoping she blows out what’s left of her knees so she can exit this “revolution”.

Daniel Bryan commends the ladies. Paige wants to know why Amanda was spying. Amanda denies it. Tanner is grilled about Jericho’s book. He’s only read one chapter. (DANIELLE: When you have four women yelling at each other over talking to each other behind closed doors because of blonde hair, he’s lucky to have gotten through the first chapter.)

They each get 30 seconds to appeal:

Most of the competitors think that ZZ should go home.

Bryan and Paige want to save nobody. The Miz DOES — and he’s saving…

Wow. (DANIELLE: Don’t bother…I’ll say it for you: “Fuck this fucking show…”)

Thanks. Paige is PISSED. SO pissed, she yells in Miz’s face, asking him if he’s kidding, then flat-out calls him an “idiot”. The two bicker and we get a double whammy…

GOING HOME: Mada. And he was a distant second place, too. It wasn’t even close. Amanda had a pathetic 13 percent of the vote.

Paige is still furious. Miz gives her a shrug and Paige yells in his face and yells over Renee Young who tries to interview Mada.

We go off the air with Paige fuming and rolling her eyes as Miz practically eye-fucks his new slam-piece while smirking.

OVERALL: We just watched a dumb blonde bimbo get saved by a horny Miz. In Miz’s own words: Really?! And we watched as the save cost Mada (somebody who, at the very least, has charisma and physicality and presence) his spot on the show. Even more puzzling is that ZZ is still on the show, taking first place in the voting this week despite doing nothing but outright failing at nearly everything. This is the the episode that makes or breaks the series. Personally, I think this episode is the Jump the Shark moment for the series. Just a whole lot of… 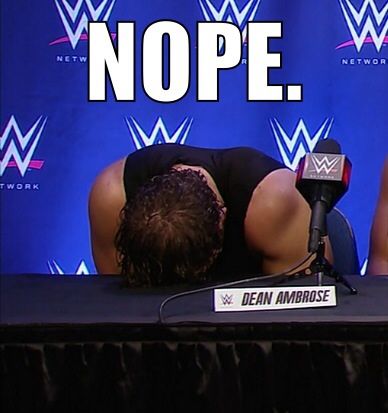 @theworkprint
Follow
Previous articleA Look Back: ‘Mission: Impossible – Ghost Protocol’
Next articleGoing Gold: ‘So Many Me’ Review – For the Child In All of Us