‘The White Princess’: Romance and War blossom in “Burgundy”

“What have they done to us? We are their creatures.”

Thank goodness The White Princess is moving at a breakneck pace. If there’s one thing that irks me about shows like Game of Thrones, it’s that big events like pregnancies or declarations of war take entire seasons. Luckily for us, both of those things happened in The White Princess’s third episode, “Burgundy.” Usually in historical fiction TV shows, the first few episodes are meandering affairs, taking time to hold the viewer’s hands through explaining the plethora of characters and locations. The White Princess has forsaken these deeds and launched into the highlight reel of the era. And yet, it doesn’t feel like the relationships are cheapened by this move. We understand the main characters and their motives, notice their small gestures, and genuinely get to learn about their feelings. 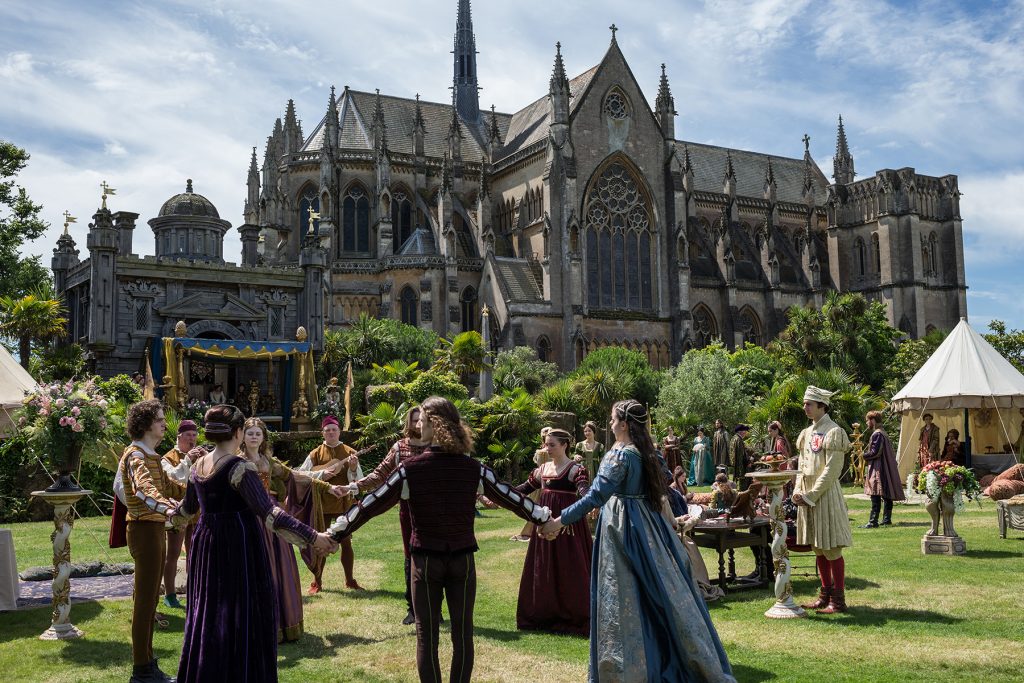 As of the end of last week’s episode, Jasper Tudor and Lord Strange were sent as English envoys to Burgundy to broker a peace between the two. Jasper was sent as punishment to keep him away from the King’s mother (and their awkward romance), but it seems that move wasn’t as ill-advised. Jasper has a way with words and quickly endears himself to the Duchess of Burgundy (yet another woman in power named Margaret). She doesn’t want war, despite the pleas from Elizabeth Woodville. The Duchess understands the precarious situation she’s in, positioned between France and England, but she’s receptive to Jasper’s words. The two flirt and banter back and forth and just when it seems there could be a peace between the two houses, Lord Strange, a weasel of a man, intervenes. It’s not clear if he’s directly responsible for the death of the Duchess’s daughter, Mary, but she blames the Tudors regardless, and tells them to prepare for war. 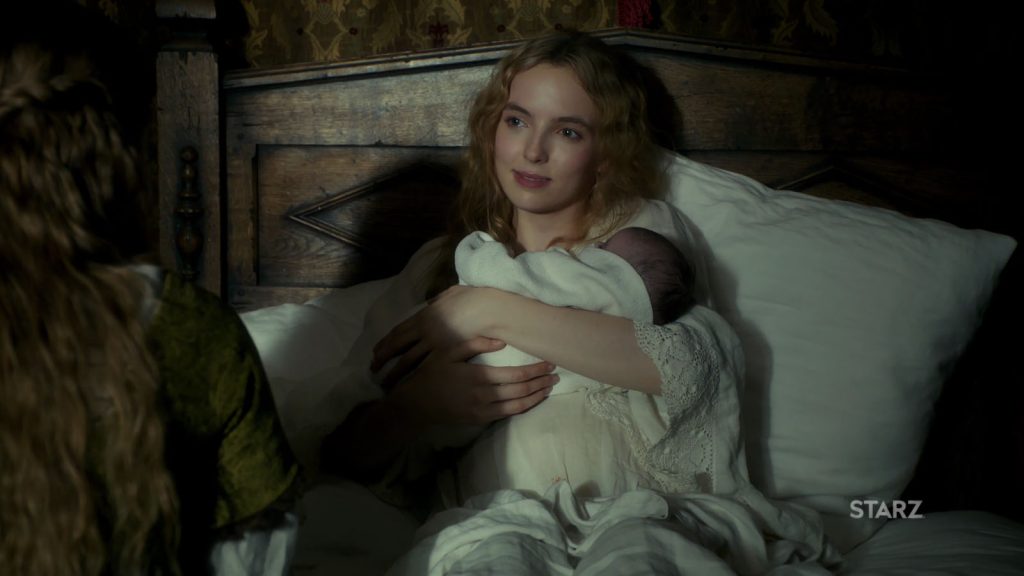 After only half an hour of pregnancy time over the course of two episodes, Lizzie finally gives birth to baby Arthur. Henry and Margaret whisk Arthur away almost immediately to Winchester to baptize him and while Lizzie is understandably distraught over the separation, she puts up less of a fight. From the moment he is born, we see a change in Lizzie’s demeanor and now she understands the dire situation she and her son are in. Before, Lizzie was more eager to go along with her mother’s plots because it meant freedom for the Yorks, but with Arthur in her arms, Lizzie now has to consider how rebellion would affect his life, as well. If Elizabeth Woodville succeeded in putting Teddy Plantagenet on the throne, would she have to flee with Arthur? Would he be killed in the rebellion because he, too, was a symbol for Lancaster hope? If Lizzie gives in to her mother’s wishes and pleads for war and rescue, then she sentences her family, her son, to more bloodshed.

Despite knowing Elizabeth’s intentions (and her resentment toward Arthur), Lizzie doesn’t wish ill toward her mother and still trusts her counsel. At the end of the day, she begs Henry to put her in an Abbey, where she, theoretically could do less harm. (That, of course, doesn’t pan out because no one can hold back Elizabeth Woodville.)

Before Lizzie’s coronation, Elizabeth writes to her and pleads with her daughter to start a war to “save” their family. She asks that Lizzie come visit her but instead, Lizzie heeds Maggie’s counsel and does her duty as newly coronated Queen. 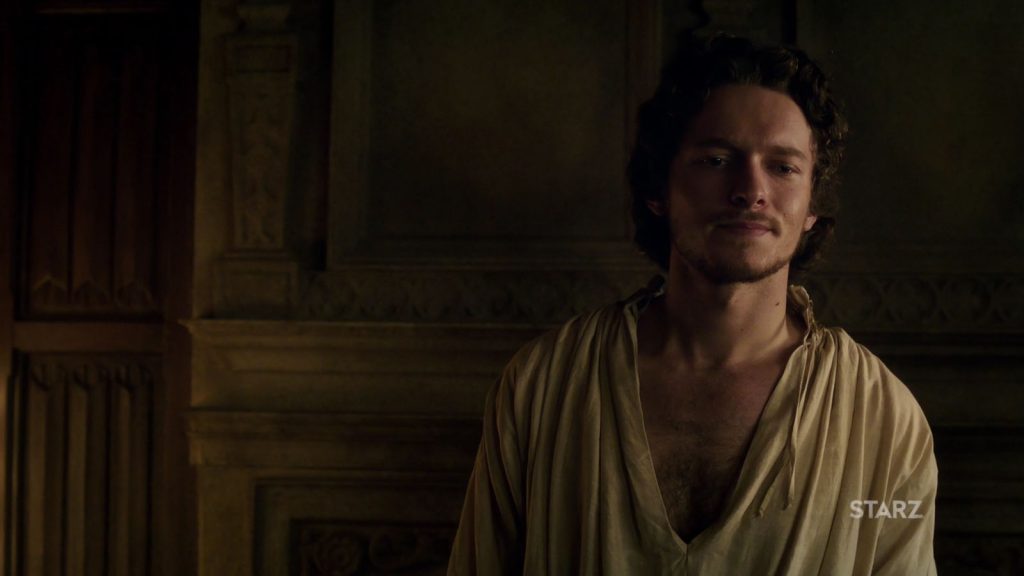 Henry and Lizzie Have A Moment

Let’s make this perfectly clear: I still don’t love Henry for his actions toward Lizzie. The fact that in his anger and frustration he was still driven to rape his betrothed does not sit well with me. Of course, Lizzie took control of that situation and made Henry rightfully feel like the horrible person he was. That being said, I find myself oddly drawn to Henry and his burgeoning relationship with Lizzie. I don’t care for the way he uses Lizzie to take jabs at his mother, but I think deep down he could be less of a spoiled brat, given he spends enough genuine time with his wife.

Henry confesses that he never expected Lizzie to love him, only that he hoped she wouldn’t try to kill him at every turn. When he asks if she’ll promise to not plot to kill him, she stays silent and I had to chuckle because Lizzie is so true to her stubbornness and I love it. Lizzie doesn’t lie to Henry. She owns who she is. She isn’t a woman who professes love and false niceties to win Henry’s affections. She lays the truth in front of him, plain and simple.

Henry: “Perhaps you cannot understand being told your whole life what you are, with never any chance to think of it for yourself. I sometimes wonder what I would have been, what I would have chosen if my life had been ordinary.”
Lizzie: “That is what my life has been as well. A puppet for my mother’s own ambition. It was her who craved the throne for me.”

Henry spends much of his time complaining about how he never wanted the throne, how his mother had planned his life for him without any input, and Lizzie puts down: You’re not the only one. She doesn’t demean his suffering, but she doesn’t placate him either. Once Henry realizes that he isn’t alone but that Lizzie also isn’t going to hold his hand through his emotional childhood, he backs off.

In the end, it’s Lizzie who comes to Henry with the peace offering, bringing baby Arthur and herself to sleep in Henry’s bed chambers. The pair cuddle, finally making their silent respective choices to protect their new family instead of their mothers who conspire against their spouse.

Every major decision in The White Princess is made by women. Men sit around and wait for the women to decide what to do next and it’s so wonderful.

I won’t lie, I swooned a little at Henry and Lizzie coming together at the end. Their slow burn romance is great and they’ll need that united front for when Burgundy arrives on their doorstep.

Cecily was less “on-the-nose” this episode and her character was all the better for it. She clearly suffers from a lack of love and she gravitates toward Margaret because even though the affections are false, Margaret shows Cecily the attention she has never had as a child. Even Lizzie pulls Arthur away from Cecily when her sister asks to  hold him. It makes her a much more sympathetic character to cast her in such a subtle light.

Maggie and Teddy still have the most heartbreaking arc on the show. Maggie is the absolute best character right now. She’s whip smart at reading others but she still cares for everyone but herself. It kills me to know that in the coming weeks, things cannot end well for her or Teddy.

The White Princess airs Sundays on Starz at 8pm EST.