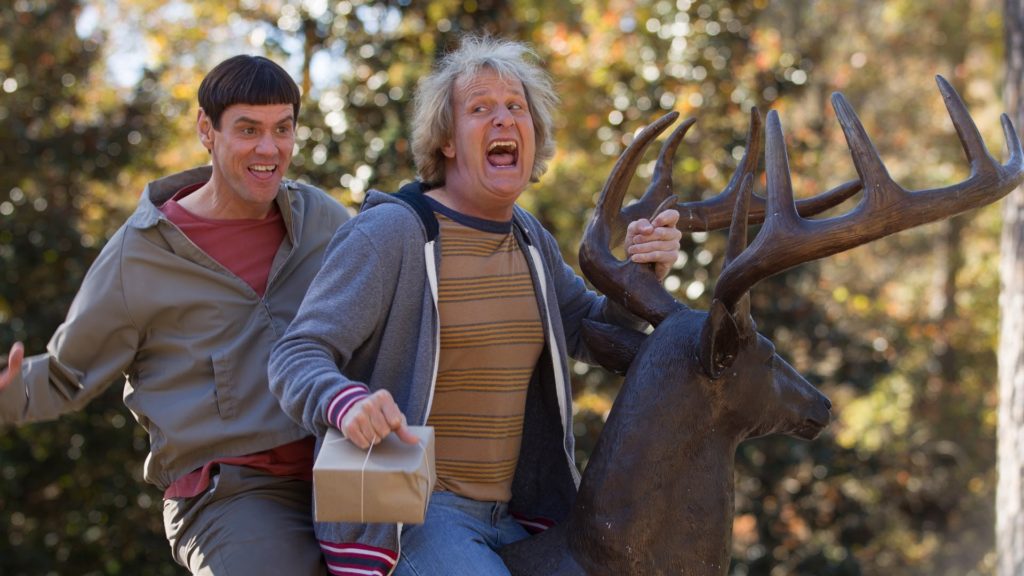 Happy Friday, Weekend Wisdom readers. I come at you this week with a truly horrific film in our midst. No, it isn’t a leftover horror flick that somehow missed the Halloween release window…it’s worse. It’s a cheap, money grab excuse for a sequel that is coming out roughly 15 years too late for us to be genuinely excited for.

The film in question is Dumb and Dumber To (the “2” is spelled wrong – get it?) and boy does it look terrible. Not a single trailer, commercial, or poster has made this film look even remotely appealing thanks to an over-reliance on immature gross out gags and a rehashing of jokes from the first film, which collectively cracked us up exactly 20 years ago. But let’s be honest: if that the filmmakers or actors had something truly interesting or hilarious for these characters to do again, it would have happened well before now. Instead, this feels like a sad attempt by the faltering Jim Carrey and Farrelly Brothers to cash in on one last (hoped for) hit. Poor Jeff Daniels should have just backed away gracefully and maintained his more classy status quo.

The film currently reeks with a 27% score on the Tomatometer but look for that to drop as the weekend goes on. So can we all just collectively agree to pretend this movie never happened and let it slip away with as little fanfare as possible? Thank you.

What Else Is New?

Luckily, this weekend does offer some smarter alternatives to Dumb and Dumber To if you feel like preserving or using a few braincells.

Opening in the most theaters behind that sad attempt at comedy is Beyond the Lights, a drama about a pop star and her romantic relationship with a cop assigned to her security detail. I haven’t seen this yet but it sounds like comparison to The Bodyguard end there. The film has been earning stellar reviews (87% on the Tomatometer) and high acclaim for star Gugu Mbatha-Raw who previously wowed the movie world with her performance in Belle. It sounds very much like a star is born.

But when it comes to already established stars the big movie this weekend is definitely Foxcatcher. With Steve Carell, Channing Tatum, and Mark Ruffalo all working under the typically fantastic direction of Bennett Miller (Capote and Moneyball) this one is earning heaps of Oscar buzz with its chilling true story backdrop. We’ll have a full review up for you later this weekend but be warned that the movie is only playing in 6 theaters this weekend. I’ll be sure to let you know when it expands further.

And finally, this weekend is bringing Rosewater to 371 theaters across the country for the true life telling of reporter Maziar Bahari’s imprisonment and torture in Iran. But what makes Rosewater so special is that it heralds the directorial debut of political comedian Jon Stewart who happens to be one of my personal heroes. I’ll be posting a full review of this one later this weekend but don’t just wait for my verdict – go check it out!

Have you been hearing raves about a film called Whiplash but didn’t know where or how to see it? If the answer to that is yes, then this weekend you’re in luck. After earning rave reviews (97% on the Tomatometer) in very limited release, this critical darling is finally getting something close to a national berth by expanding into 419 theaters this weekend. And if you’re not quite sold on the idea of a film about a music teacher and his student, just read Keith Kuramoto’s review by clicking HERE and I think you’ll be changing your mind immediately.

Okay. Here’s where I geek out.

As much as I’m excited about some of the new movies listed above, the thing that has REALLY had my blood pumping all week is actually 48 years old. And although I am not nearly that old myself, this particular thing was a staple of my childhood and routinely something I have always turned to for a laugh.

If I were more clever I’d make you figure out what it is with a riddle but instead I’ll just geek out and scream, “IT’S THE 1960s BATMAN SERIES!!”

Oh yes. After years of Warner Bros. and 20th Century Fox battling it out over who owns the rights to this particular series cooler heads prevailed and an agreement was reached to bring us Batman: The Complete TV Series on Blu-Ray and DVD just in time for the caped crusader’s 75th anniversary.

This glorious boxed set includes all 120 episodes of the series that ran from 1966 – 1968, 3 hours worth of bonus features, and some sweet swag including a mini Batmobile, a pack of trading cards, and a book of memories from star Adam West.

To be fair, you have to be a mega fan to shell out for this kind of boxed set so for those of you only interested in a smaller sampling of POW! BAM! ZAP!, there is also an option to purchase just the first season (the best of the three) or individual episodes via iTunes.

This series will definitely prove jarring to those Batman fans who have only experienced his more recent, “dark and gritty” outings on the big screen, so its important to remember that this particular series was produced as a comedy and was successfully nominated for a Best Comedy Emmy in 1966 along with a Supporting Actor nod for Frank Gorshin’s portrayal of The Riddler.

This is the kind of show that begs to be viewed with a group of your goofiest friends who just ready to have an unpretentious good time. Throw in a few cocktails and you have a hilarious night of TV in front of you. I promise.