An homage to sitcoms like Bewitched and I Dream of Jeannie, WandaVision is a fragmented reality of its two titular heroes, stuck in their own type of Pleasantville.

I have been waiting for this moment in the superhero genre for a very long time. The period where we see big superhero franchises transition slightly away from the superhero beat-em-ups and get downright crazy and even metaphysical. Because in a world where superpowers and superbeings exist, I don’t think every conflict needs a battle. Not everything should be a big lead up towards an Avengers: Endgame. You can make superhero stories without them.

In fact, both the Sandman and Silver Surfer, two of my favorite comics about superheroic and otherworldly beings, were fantastic stories that in lieu of fistfighting, had conflicts of family, philosophy, and what it means to truly be human. I think Swamp Thing tells a similar promising tale about humanity, and I also believe Martian Manhunter, and in this series: Vision (with Wanda), also tells stories about people just one-degree separated. People that just want to be normal, fit-in, fall in love and be understood… hopefully in their own happily-ever-after.

For a Spoiler-filled discussion, you can listen to our Yakety Yak: A WandaVision Podcast over at TheWorkprint podcast. Available here, Apple and Google Podcasts and Spotify. 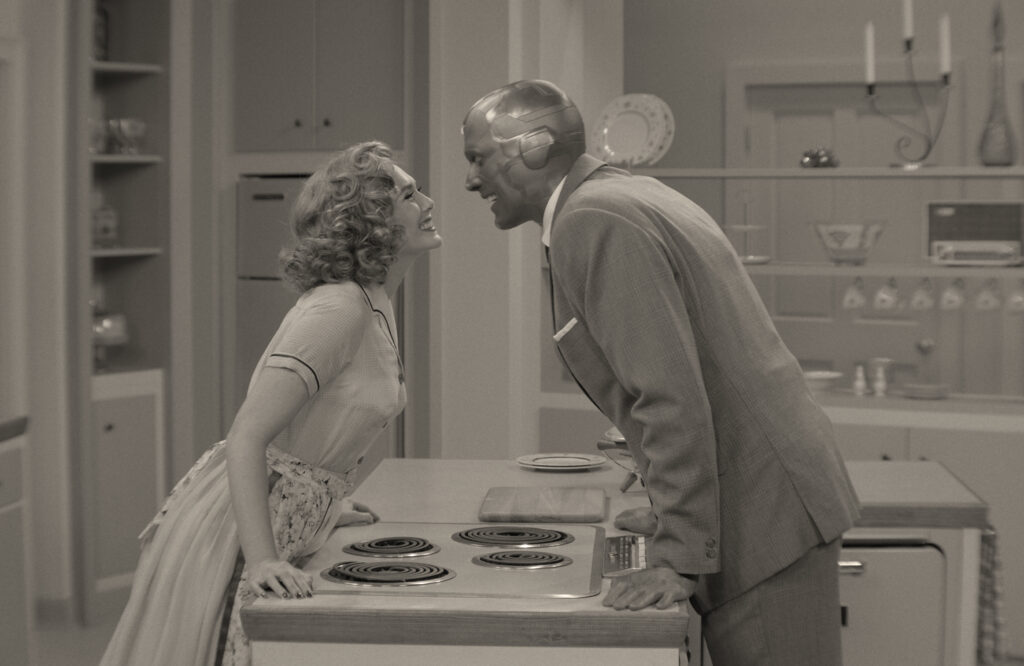 WandaVision starts as a direct tribute to the 1950s era of sitcom comedy. The jokes are oddly situational and sympathetic, and the tensions derive from the need of Wanda to not deviate from the sitcom reality. The plot thus far of the series’ first two episodes, seems to come from seeing the two as a couple attempting to blend in. Wanda, as a supportive housewife who can do-it-all quite literally with the snap of a finger, and Vision as the loving husband who has a job — that quite frankly, doesn’t make any sense — and their suburban lives in the golden age of the sitcom family. And while most of the fun is in seeing this duo do what they can to fit-in there’s this dark thread I absolutely love about the series that cuts through the happy-go-lucky tone like a hot butter knife. It’s a truth we acknowledge that the characters incessantly ignore that’s consistently slapping the audience in the face:

That there is something very wrong with this picture 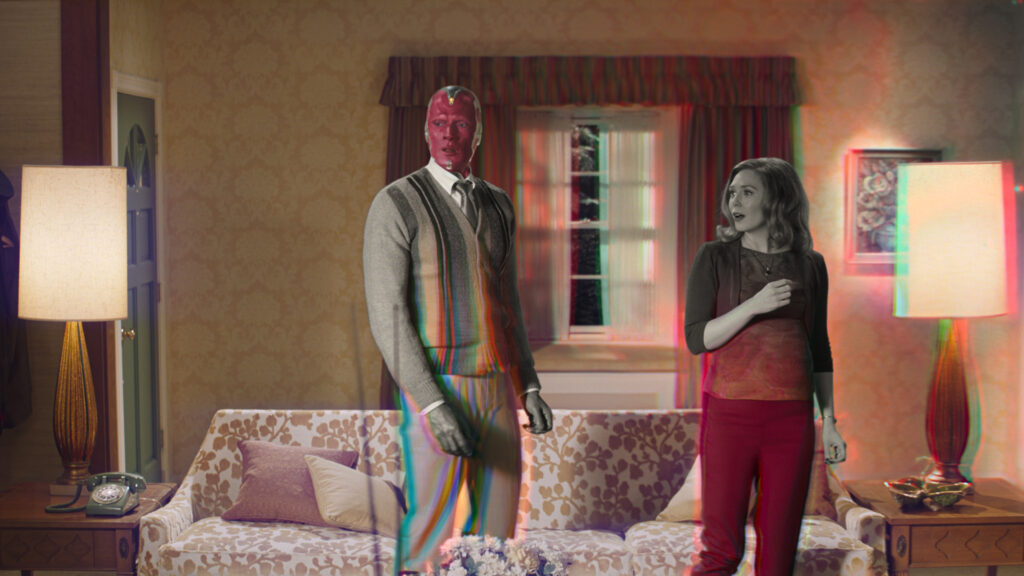 I applaud writers Jac Schaeffer and Gretchen Enders, as the show is funny in sort of a cheesy antiquated way that would make my grandma laugh. A perfect encapsulation of that era and brand of comedy. But what it’s the secret that really drives this series. The confusing moments of reality breaking tension, and the need for our characters to force a smile and convince ourselves of the happy ending.

Behind the scenes, as we know from Endgame, Wanda and Vision’s stories are honestly very tragic. Which is why I’m excited as this show completely reverse engineers the formula. Vision is dead. This is, in a twisted way, our lens into their world as a loving couple that we’ve been told yet never seen, and their happy beginnings. In the first two episodes, we establish that this pocket reality of sorts is fragmenting. Color is changing. And more than anything else, someone nefarious lurks from behind the scenes to ruin the picture.

But none of that matters because the show reminds us it’s a funny sitcom! I find it poetic that Elizabeth Olson does such a stellar job fitting the role, given her sisters’ history of being sitcom darlings via Full House. Though much due credit in Paul Bettany, who finally sees some spotlight after being a part of the Marvel Cinematic Franchise since it’s inception (I think we sort of forget that he was the original Jarvis alongside Ironman sometimes).

The tone of the first two episodes is concise. The first one being a confusing introduction to this reality, and the second is a funny take on a PG13 version of a drunken magic show. But that’s all I will share due to spoilers. More than anything this show is about love as we get to see more of Vision and Wanda as a couple, which makes me giddy as I’ve always loved their relationship. 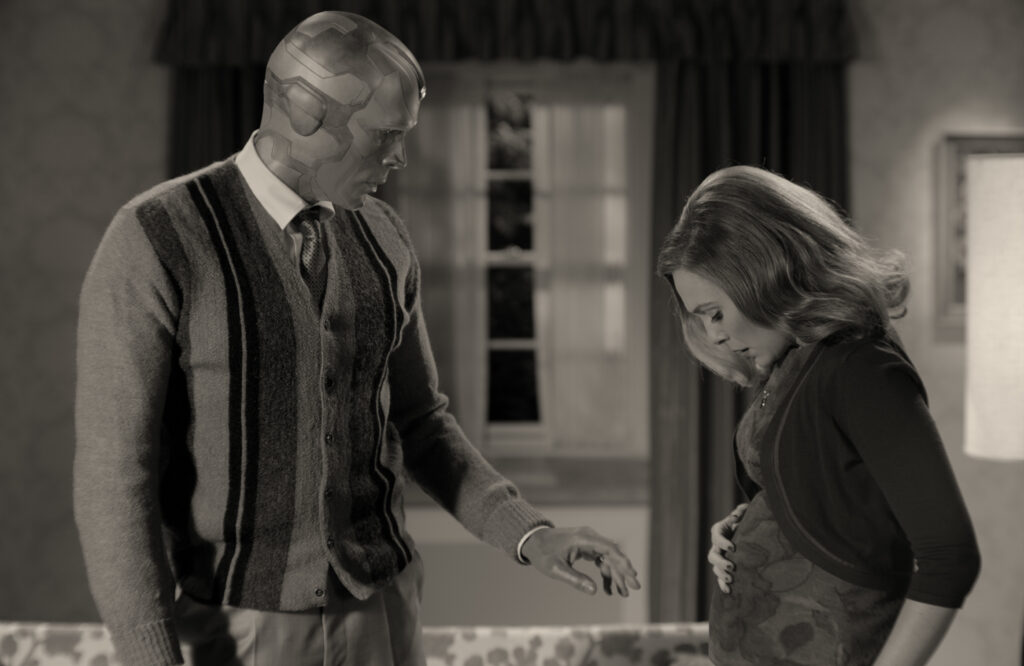 In WandaVision we see the beginnings of the Marvel Cinematic Television era. The first show among many, that the Marvel brand is planning to release to coincide with their cinematic movies. Weirdly enough, this next phase will operate a lot like professional wrestling. Regular TV content in the Disney+ MCU that is then supplemented with your movie-going MC theatre event.

Atop of this, what you’re seeing is no longer vigilantes but rather, superheroes that can bend reality in itself. A direction which the MCU started steering towards with Doctor Strange — which uncoincidentally, will be tying into Wanda Maximoff’s story — and one that opens up a lot of Marvel storytelling possibility. With WandaVision, The Eternals, and later, Doctor Strange and The Multiverse of Madness, these are not your traditional superhero stories. Because like all good narratives, things have to change over time. And now that we’ve entered Phase 4 and the era of Disney+, we’re starting to see more unique takes, with more representation and more female-driven leads.

So, what happens when a reality-bending 5-Star level superhero that makes Jean Grey quiver in her boots and the world’s first Ubermensch supercomputer lives in a Pleasantville type of Utopia? The answer to that is exactly what you should expect in WandaVision. Tune in every week for a spoiler-filled podcast breaking it down, and a spoiler-free review here.