In the latest WandaVision, we go full 90s with uncle Quicksilver. Meanwhile, Vision goes on a mission.

Last week’s WandaVision ended on a stunning revelation where many of the show’s big truths were finally revealed. An epic cliffhanger that forever changed the Marvel franchise finally happened and Quicksilver is alive and well again. Just not the one that we were expecting, as

Evan Peters from the X-Men franchise is here and has seemingly replaced Aaron Taylor-Johnson.

For a full recap, we bring along special guests Mary Fan and Victor Catano to talk shop about this week’s episode.

In episode six of WandaVision, we pick-up where we left off with a 1990s Malcolm in The Middle homage following the now pre-teen Thomas and William Maximoff; the boys spending the day with reincarnated uncle Pietro, aka Quicksilver. Though things don’t go exactly as planned, as S.W.O.R.D. has an agenda of its own and Vision goes on a secret mission to discover what’s really happening here in Wanda’s reality. 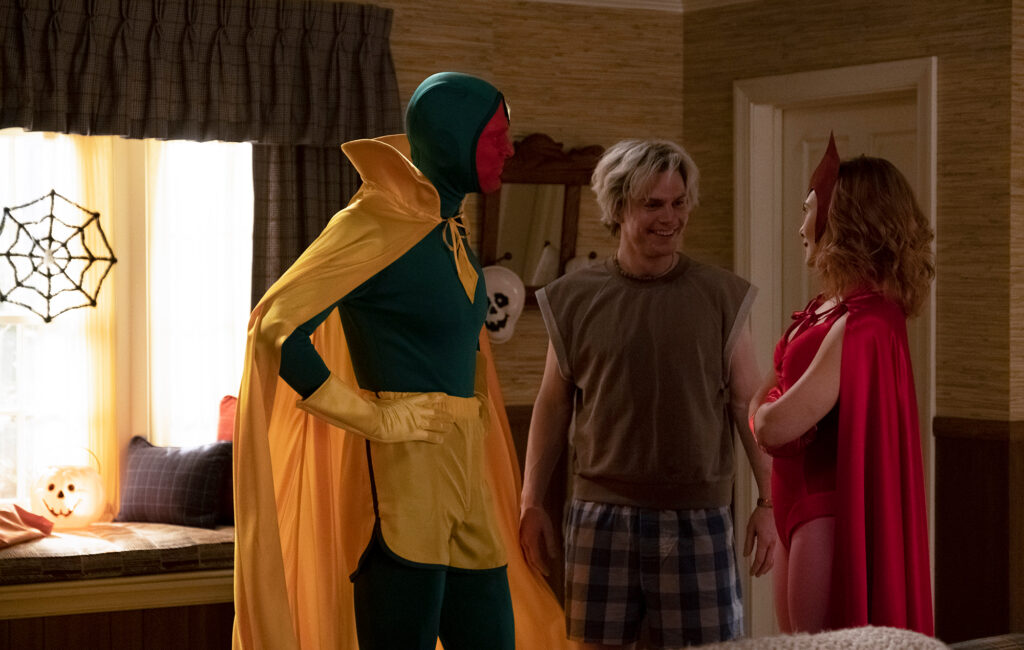 Immediately, this episode starts off embracing the comedic styles of the 90s with direct-to-camera monologues like in Malcolm in the Middle, atop of the signature cutaway flashback gags.

During this sitcom, Quicksilver comes into town unexpectedly, ready to cause chaos in town with the children, though it’s nothing more than some simple silly stringing and candy stealing. But in a moment of revelatory silences, Pietro remembers tiny glimpses of his past, like how he was shot and killed, yet ended up coming here to Wanda’s reality because it’s what she wanted. What’s odder, is that he doesn’t challenge her methods. Like how she must’ve kept the extra kids in town hidden somewhere or the fact that there’s something incredibly wrong with keeping everyone entrapped here.

It’s not a good sign that both Pietro and Vision are dead when she comes to her cathartic realizations and worse, is that Wanda doesn’t know how all of this happened just that she felt endless nothingness and suddenly, the town came to be.

Meanwhile, Vision realizes several nuances wrong within this bubble reality. Like how there are no clothes in his closet except the ‘Mexican Wrestling’ costume that Wanda wants him to put on, or that the people around him around the borders don’t seem to fully be people. At least, not free-willed ones full of agency.

We learn Ellis avenue seems to be the border of the town, as it’s not only where neighbors can’t cross without forgetting and turning around, but it’s also the edge of Wanda’s hex(agon) reality. One that she warns her boys to never cross. The Hexagon is the limit to Wanda’s control. The further people go out towards the borders, the more people like Agnes forget and are stuck just inside. When Vision does so: he immediately disintegrates into a hollow shell again.

To add to the chaos, it seems like bloodwork from S.W.O.R.D. shows that Monica Rambeau had changed on a molecular level, possibly giving her abilities and introducing her to power. Given Hayward’s fear and obsessive control of the border shows that S.W.O.R.D. is hiding something big inside, we just don’t know what.

The popular theory of the week is in regards to the commercials featured in WandaVision. An Easter Egg brought to me by my guest of two weeks ago, Christopher Peruzzi, as apparently, the commercials might have connections to the infinity stones.

Brought up to my attention, the theory is that somehow the stones are connected in each commercial. How the Toaster is Vision’s mind stone, the Strucker Watch is time, The Hydra Soak is shaped like the Tesseract, the Paper Towels emulate the Aether, and that the death of that child in the commercial this week, is referencing Red Skull and the necessary sacrifice made to grab the stone.

The Toaster is: The Mind Stone

It’s a bit of a stretch but who knows. Just about anything is possible in this show as many media outlets have guessed and it’s about as legitimate as the possibility of John Kracinski possibly entering into the series as Mr. Fantastic in what could be an Office Parody for next week.

But again it’s all theories.

An enjoyable episode as more pieces are put together but this episode but it doesn’t do much to elaborate the plot outside of what we already know. Meanwhile, D’arcy was sucked in so there’s a high chance she’s going to be a character in this next episode. We’ll find out next week!

Previous article
Judas and the Black Messiah Review: An Important Movie about an Important Man
Next article
Watchmen: Season 1 Episode 3: “She was killed by Space Junk” Review