In the latest WandaVision, everything finally comes to a head as all the answers we’re looking for are had. We break it down and more including that major game-changing ending

This post is late, I’m well aware. I wasn’t one hundred percent certain if I was going to still do it, as unfortunately due to some behind-the-scenes technical issues, the podcast is temporarily shut down. Two episodes, including one on this and the podcast about Watchmen, remain in limbo. Though we will upload them ASAP once things are fixed.

That said, a lot did happen this week but I’m sure most people already figured it out. WandaVision is a series that breaks that traditional heroes journey formula, which is odd for a Disney+ launching title, but fun none the less. The big event in episode 5 was the revelation that many of the conflicts within the series revolve around Wanda, who is seemingly pulling everyone’s strings. It is oddly reminiscent of Ultron and reminds us of her reality-bending abilities. Something which was confirmed with the Kevlar vest turned dress of Monica Rambeau.

The biggest reveal, which everyone was talking about, was the bringing back of Pietro, aka Quicksilver. Wanda’s brother who’d allegedly died in Avengers: Civil War. The major catch, however, was that Quicksilver was in fact THE OTHER SPEEDSTER. The Quicksilver from the Fox X-Men Franchise effectively combining the two universes together. 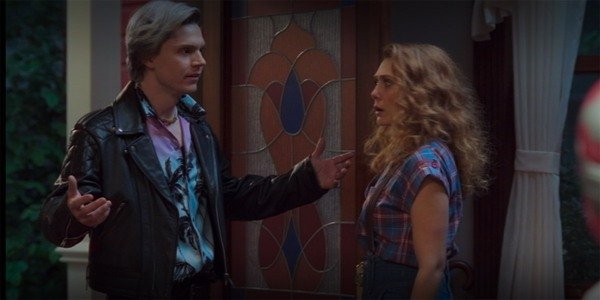 Well, as we learned from this episode, Wanda can’t exactly revive someone fully intact. Not unless she has their body, like in the case of Vision, and even then, it’s more Pet Cemetary than it is Jesus Christ (Meaning that it’s often a botched resurrection).

Sort of taking the house of M storyline and flipping it on its head by saying ‘YES MORE MUTANTS’ we get QuickSilver from the XMU. A major reveal with even bigger implications for the franchise moving forward. With confirmed appearances of Ryan Reynold’s Deadpool in the MCU, there was always going to be some sort of Universal cross-over event going forward but we hadn’t known exactly how. Well, until now. However, X-men are not the only Fox related properties entering the fold.

During the episode, Monica suggests that she knows of an aerospace engineer suited for the challenge of infiltrating this hexagonal universe that Wanda has created. Carol Danvers is a test pilot, so that throws her immediately out, but there is, however, one person who perfectly fits the bill: Mr. Fantastic. Already, the leader of the Fantastic Four knows plenty about radiation, much like the ones surrounding this tiny Wanda controlled universe, but also is arguably one of the smartest men in the Marvel Universe. The archrival of Doctor Doom, who is already confirmed to be featured in Black Panther 2. Add on top of this, Monica’s close history with the Four (who even motivate her to become the next Captain Marvel), and what you have here is a likely introduction.

We’ll know more Friday to be sure.