‘A Discovery of Witches’ Season 2 Episode 5 Review: Vampire Fathers are Blunt and Nosey

In this week’s episode of A Discovery of Witches, Matthew and Diana make it to France, but face new challenges as Philippe tests the strength of their relationship.

Here are the key moments of season 2 episode 5: 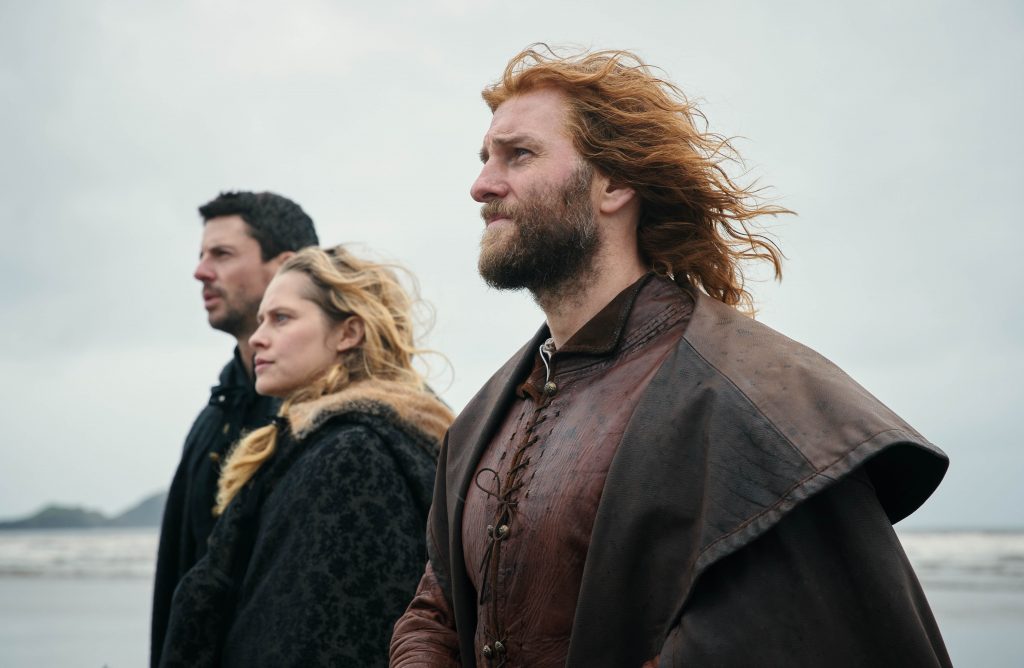 The Journey to Sept Tour

Gallowglass (Steven Cree) only accompanies them as far as the shore of Mont Saint Michel as he still refuses to enter France after his father Hugh was killed on French soil. He tells Diana (Teresa Palmer) not to loose Matthew (Matthew Goode) or herself before departing. He is heading to Bohemia ahead of them and will meet them there after their stop at Sept Tour. In advanced though Philippe (James Purefoy) had sent a retinue of guards that Matthew indicates isn’t merely there to protect them, it appears to also be a show of strength.

The journey is a difficult one especially for the historian whom at first has to ride side saddle because of her garment. It is often cold, rainy and sleep isn’t comfortable. Diana even passes out and falls from her horse from exhaustion. As they draw closer, Pierre, who had traveled with the couple from London advises Mistress Royden to be the light for Matthew as they head to his ancestral home. The other vampire then leaves Bohemia as well to find lodging for them on the next leg of their journey.

There is also a moment for Diana and Matthew to consummate their relationship on their way to Sept Tour but he tells her not yet but in time. She is clearly confused but doesn’t question him. The following day Diana wakes up to discover that somehow Matthew has found her some leather pants and now she can ride normally. Hooray! 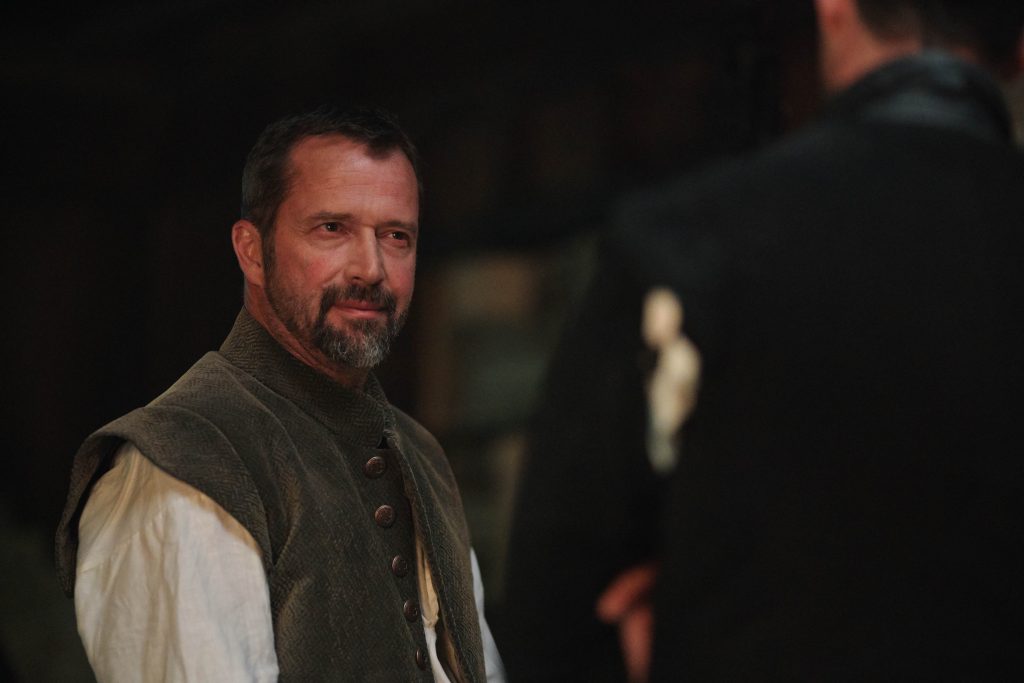 Before arriving at Sept Tour, Diana tells Matthew that she knows this will be like opening an old wound for him as he hasn’t seen his father in years. She hopes though that he might be able to gain some closure at last but acknowledges that the reality of getting more time with a dead loved one is a complicated one. Matthew is clearly very unsure of how things will go during their time in France. He doesn’t fully trust his father and probably himself at the moment.

When they finally meet Philippe in his study, a very determined Diana actually reveals to the other vampire that they are from the future and in the past to find her a teacher as a weaver. The elder man seems completely unsurprised by her classification, explaining that he’s lived a very long life and has seen things she’s never seen. Diana though retorts back she’s seen a lot of things that don’t exist yet. Matthew is clearly not happy that his lady love outright said that they are from a different time. Things take an interesting turn though when Philippe says that his unsure of his son’s affection towards the witch because he can tell they have not consummated their relationship. Apparently, they have two very distinct smells and if Matthew really loved her wouldn’t he have fully mated? Diana is super pissed upon this revelation despite the geneticist pleading with his father not to doubt his feelings towards her. Philippe instructs that they will be sleeping in separate rooms with Diana storming off in anger. Matthew follows her and tries to explain that it’s complicated and that he didn’t lie to her but she knew there was something holding him back. The witch also retorts that Philippe didn’t think this was a complicated matter and in frustration Matthew lashes back that maybe she should sleep with his father instead. Diana slaps him and uses her magic to forcibly remove him from her room.

Outside, the vampire is clearly trying to suppress his blood rage that is just simmering under the surface. He returns to Philippe’s study to confront his father, but the elder man says that it was necessary because it wouldn’t take that long for the witch to discover his lie. Matthew angrily claims that he has never lied to her however Philippe points out the sin in his omission. The younger male says that is between him and Diana with his father adding if only that were true. The head of the de Cleremont family pivots suddenly and asks when his last feeding was. Matthew is confused and is summarily dismissed like a child, told to feed in the morning. Philippe clearly feels that the other vampire is hangry and will feel better after getting some nourishment.

The following day, Diana wakes up super grumpy as an attendant helps her get dressed. Matthew has gone out to hunt and she meets Philippe in the dining room. She’s still pretty ticked off but as a gesture of goodwill he gives her the keys to the house as she’s the highest-ranking lady with Ysabeau not in residence. As she asks where the library is located we see how Philippe is not fond of books. He leads her to the room though and says that she can take anything she likes.

Later on, a witch from Lyon arrives asking to speak to the head of the de Cleremonts on a matter of urgency. The vampire comments that the other man is lucky that his wife currently is away or his reception would be quite different. Eventually the two men head to Diana’s room where she seems to sense that something is wrong. The male witch is aggressive in saying that he is here to help her and recognizes her power, even going as far as to tell Diana that he’s going to steal her memories despite her cries of protest and anguish. Matthew returning from his hunt hears her distress and runs to help but Philippe stops him. Instead, she summons his dagger and then uses it to stab the witch cold heartedly, killing him. She said no. After her experience with Satu, Diana is never going to let anyone violate her again. 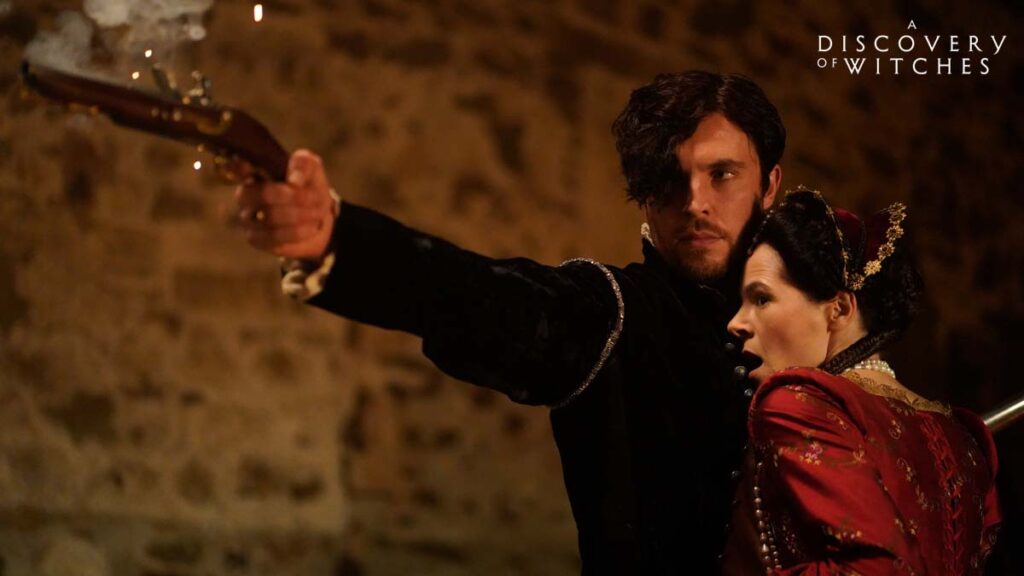 Another de Cleremont Arrives in London

Matthew’s sister Louisa (Elaine Cassidy) arrives in London as Kit (Tom Hughes) is drinking his melancholy away after his fight with his bff and secret love. She’s drinking from a human in broad daylight and doesn’t seem to care one bit who sees her. The daemon comes upon her and the two catch up as Louisa was there from Venice to see her brother though he’s been summoned back to France.

Louisa is a fiendishly fun character. She is clearly very dangerous, headstrong, impatient, and mischievous. She briefly kisses Kit and discovers that the man is in love with Matthew though he of course refuses to openly admit to it. Instead, he fills her in on how her brother is in love with a witch. The two drink loads more and decide to target practice by shooting glass bottles but cause a disturbance. A local man tells them to go away and calls Louisa a whore. Big mistake because she has no qualms in killing him instantly. She seems to bring out Kit’s darker impulses as he agrees that she’s infinitely more fun than her brother. 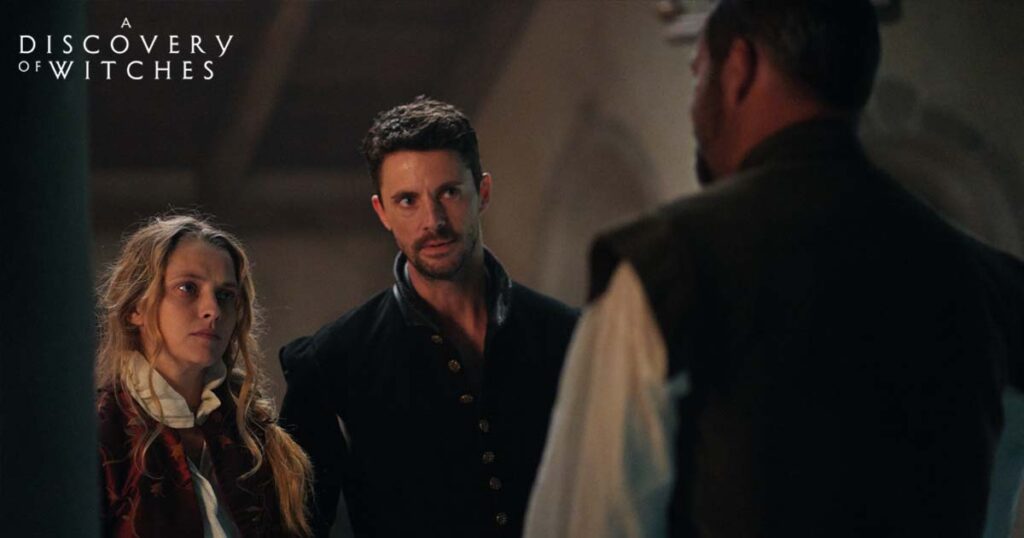