This Week’s WandaVision paints a clearer picture about what’s happening but ultimately keeps its audiences guessing. We explain everything that we can about what we think is happening, along with S.W.O.R.D. and the magic prison theory below.

Even though I said I’d be doing spoiler-free reviews last week, I don’t think it’s possible because thus far, I’m not entirely certain what I’d be spoiling. Every media outlet I’ve read covering WandaVision seems to be sharing bits of comic book history and speculation. Easter Eggs that could be pieced together, though ultimately, I don’t think anyone genuinely knows what’s actually happening. This show, much like LOST back in its heyday, seems to be more about questions rather than answers. And thus far, the only consistent thread I’ve read is that it’s obvious Wanda is trying her best to keep this alternate reality afloat. Why this is? We don’t actually know.

But to recap: last week, we had a double-episode WandaVision debut, where a dinner with Mr. and Mrs. Hart – Vision’s pretend boss and his respective wife – led to a twisted Wanda almost letting Mr. Hart be murdered STOP IT moment; followed by an episode where Vision pulled some gum out of his gears during a drunken magic show FOR THE CHILDREN. A storyline that at first seemed like filler until, by the episode’s end, it intentionally led to Wanda’s random pregnancy. Which we explore in this episode.

It is in these types of situations that perfectly portray WandaVision’s tonal conflict as the show is strangely a bit everywhere. Something both dark in a GET OUT scenario where Vision is the only one not in on the ‘joke’, and at the same time, uncharacteristically happy in seeing Wanda and Vision’s happy life as a family.

Yet, there’s an innate discomfort built within the tension of these two conflicting realities that I am uncertain is sustainable in keeping an audience’s attention week-to-week. Especially, when the sitcom elements that run the majority of the runtime on WandaVision seem to be ultimately meaningless and none of us really know what’s going on in the series…

So here are a few possible answers floating around the internet based on everything we’ve seen up to Episode 3.

For an in-depth look and take on what’s happening. We Breakdown Everything and more in Yakety Yak: A WandaVision Cast

Less a theory and more a fact, where WandaVision’s plot structure stands is in that of a classic sitcom. One that starts in TV’s original golden age. Filled with laugh tracks, friendly neighbors, and a weekly aesthetic dedicated to the American family.

This week’s opening titles, wardrobe, and home furnishings, for instance, all take an homage to the Brady Bunch and the 1970s. And if you deduce the first episode being set in the 1950s housewives era, and the second being placed in the 60s, then the series does seemingly seem to be skipping forward decade-to-decade. Do the math right, this will take us to the current day by the show’s penultimate episode.

In Episode 3, we get a Doctor named Nielsen (as in the Nielson ratings, which coincided with the history of the Sitcom), a rainstorm conjured out of Wanda’s water breaking, and a pesky magic-resistant stork. All randomly conjured magical moments as equally ridiculous as they are cheesy. While fun they’re also a bit too eager to embrace happy sentiments about the miracle of new life while somehow fast-forwarding past the exhaustive 9 months of carrying and then birthing a child along the way.

The series always seems to be striving for Wanda’s unrealistic and very solvable convenience. In order of the past three episodes: dinner goes off without a hitch, the magic show is a success, and the baby is born, twice. The twins are important to keep note of because Wanda and Vision had conflicting names for their sons, which conveniently is solved, once it is revealed that a miraculous second child just happens to be in there. In fact, thus far, Wanda’s pretty much-damned anything that stands in the way of what she wants albeit with one caveat she seems adamant to protect: that no one in town can know about her magic.

At first, I thought this was because they were keeping secret identities. But then, there have been moments of Vision’s showcasing his powers via phasing or running at supernatural speeds, where nobody second-guessed that something is wrong in this reality. But perhaps it’s not the idea of being superheroes that’s the problem for Wanda’s sustaining of the illusion. Perhaps it’s the reveal that magic exists that’s her concern. But why?

A popular theory amongst journalists seems to be the idea that they’re all in a prison for magic users. As quite literally everyone in town has been fingered as a potential magic wielder or sorcerer of some sorts in Marvel’s comic universe. The patrons in town all do seem eager to escape yet unable to either remember or share the truth. We see it with Herb trying to cut through a wall in this episode and we see it with their committees, events, and the solvable episodic problem of the week. Whether it be going away on vacation or simply going home to a place that doesn’t exist, no one seems to be able to break their roles.

There’s also some comic lore that supports that Wanda is likely not the only magic-user. As Dottie Jones, whose husband’s name is Phillip Jones, seems to hint that she’s possibly Arcana. Especially, as the two appear slightly similar in appearance and the fact she’s the town’s leader. Though the biggest hint implied in the series is Agnes, who is very much implied to be Agatha Harkness. The woman complaining about her husband Ralph (whom the internet thinks could possibly be Mephisto).

Agatha is sort of a big deal as she’s Wanda’s mentor/enemy in the comics and, in a major storyline from Vision and the Scarlet Witch, the person who helps Wanda’s sons Billy and Tommy come to life. Now, the birth of the twins is a big deal in this episode. Partially because they’re likely not real, and more importantly, are revealed to be in the comics: fragments of Mephisto’s soul.

Mephisto is based on the devil in Marvel and is potentially a game-changing villain. He is also a frequent Doctor Strange enemy and since they’ve confirmed Scarlet Witch in the next Doctor Strange film, what you have is a setup for the Multiverse of Madness.

S.W.O.R.D. is trying to break to Save Wanda? Or Possibly Stop What Could Be A.I.M. 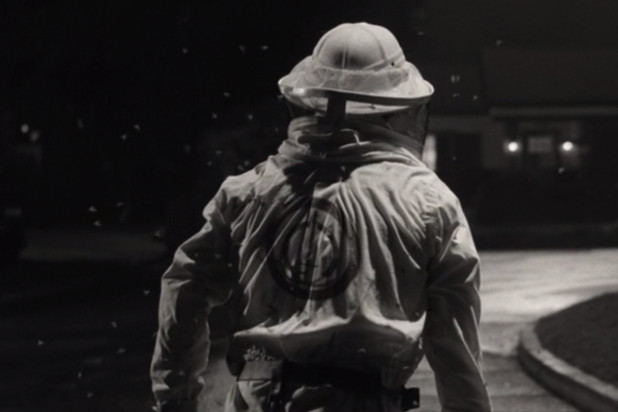 This is probably my favorite of the fan theories. Thus far, we’ve seen a lot of the SWORD logo infiltrating the series. It’s in the commercial breaks, the necklace Geraldine was wearing, and more importantly: on all the military helicopters and vehicles that have been revealed.

Given that we know SWORD is waiting just outside the compound, plus the S.O.S. addressed to Wanda, it’s obvious that the group is trying to get inside but we the audience have no idea why.

There are, however, two major events that might be telling us what Wanda’s up against. The first is the many references to Hydra, Baron Von Strucker, and even old generation Stark technology featured in WandaVision’s commercial breaks. All objects and storylines that are reminiscent of the first Captain America movie.

The second and more important hint is that Beekeeper outfit seen in episode two. Only one group in Marvel has that sort of garb and they’re directly linked to HYDRA itself: A.I.M. Who are the advanced science division behind HYDRA. To go even further down the A.I.M. rabbit hole, in the comics, A.I.M. was also responsible for the creation of the cosmic cube. The same cosmic cube that’s been responsible for almost all the technology featured in the MCU.

Now, the problem with this theory is that A.I.M. was already introduced in Iron Man 3 albeit in a different role. Through it wouldn’t be hard to retcon the whole thing and make Iron Man 3’s A.I.M have a slightly larger role in the overall MCU.

It’s widely known already that Geraldine, as we touched upon last week’s podcast, is as many fans discovered: Monica Rambeau. The young daughter of Captain Marvel’s best friend Maria Rambeau.

When Geraldine/Monica recalls how Wanda lost her brother Pietro to Ultron in this episode, it breaks Wanda’s perfect little happy sitcom reality as she realizes she’s likely some sort of spy, which makes her eject her out of town. It’s also evident now that Wanda seems to be the one definitely enforcing this charade.

Fans have speculated what Monica’s introduction could actually mean for this series, especially as her S.W.O.R.D. necklace — the organization likely run by Nick Fury mind you — blew her cover. Atop of this fans of the comics know Monica Rambeau also has some serious powers as Spectrum/The Other Captain Marvel.

Three episodes in and we know WandaVision is a campy but ultimately pointless sitcom with a dark truth that the series pivots around. It’s hard to make any sort of objective deductions about the series beyond that, though I do really enjoy the very contrasting tone.

While funny in a twisted sort of way, I do think the show needs to get somewhere soon because some critics — and more importantly casual Marvel fans — are already growing tired and just want to know what’s going on and what’s at stake here?

Previous article
‘A Discovery of Witches’ Season 2 Episode 3 Review: Summons, Bohemia, and Gallowglass
Next article
Alan Tudyk on What It’s Like Playing The Alien in SYFY’s Newest Series ‘Resident Alien’