A strange thing happened last night while streaming Telltale’s The Walking Dead season three: A New Frontier–Bilal, Leo, and myself all came to the same conclusion that Clementine had us wrapped around her little finger. Each of us fell into different camps based on this revelation: Leo was of the mindset that Clem’s nostalgia played too heavily on decision-making; Bilal proclaimed he would go to the ends of the earth for our little heroine; and I, I concluded that Clem was about to pull the rug out from under fans’ feet in a big way. You see, while I agree with Leo’s assessment that fan’s affections for Clem play a role in the story at large, I think that’s for a reason: Clementine is our villain.

Of all the characters who have come and gone through The Walking Dead universe, I ask you, who has suffered more than Clementine? As a young girl she watched her parents become walkers, witnessed fellow children, friends, slain around her, and was faced with not one, not two, but at least three horrible decisions to kill parental figures under the guise of “saving” them. Of all the characters in The Walking Dead, Clementine is the most grown up, the most hardened because she was never given an opportunity to be a child. She doesn’t have memories of “jumping across rooftops” or TV shows or even disliking school because she has never been afforded that luxury. The only thing Clementine knows is survival.

And that’s what makes her the perfect villain for the series. 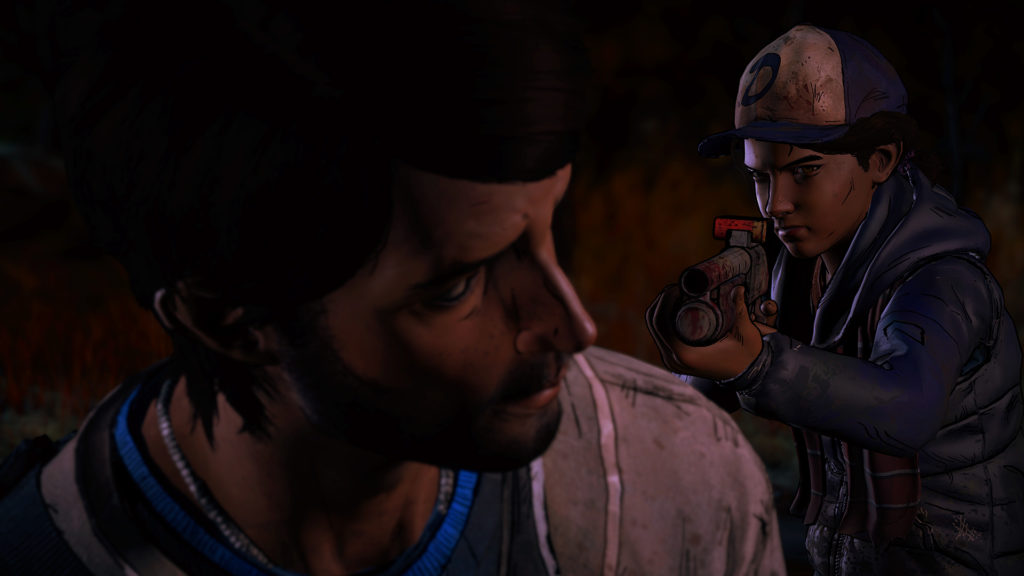 Clementine’s “turn” has been a long time coming. For a while now, we (ahem, me) have chosen the greater good as Clementine. Sacrificing loved ones like Lee were a necessary evil because it meant one less walker out in the world. Clementine has learned from every death what it means to survive and the darkness that comes along with that “luxury.” Sacrifice one for the many is practically a mantra in the post-apocalyptic Walking Dead world and Clementine swears by it.

After the deaths of Lee, Omid, Luke, Kenny, and Jane, Clementine isn’t the same polite little girl we met in season one. She’s a character who has learned to never put down her weapon, to stand up for herself when she’s been swindled, and most importantly, to never trust or grow too attached. But that’s the funny thing with trust, it goes two ways. Clementine might not rightfully trust anyone, but we, as players, trust Clementine without question. We’ve watched this girl grow over the course of two seasons and we think that above all else we can depend on her survival to get us (as Javier) through every ordeal.

And yet, if we look at Javier and his interactions with Clem through an unbiased lens, she comes across as a wholly different character. Clem is irrational, killing the weapons dealer Eli in Prescott. She is vengeful, ready to murder the New Frontier attackers at the drop of a hat. She is distrustful of anyone, like Conrad, who might out her secret that she was once a member of The New Frontier.

After playing through the first two episodes of The Walking Dead season three, I think that Clementine is much more than an ex-member of The New Frontier. I think she is, at the very least, responsible for their rise to power, and at the most, their leader. 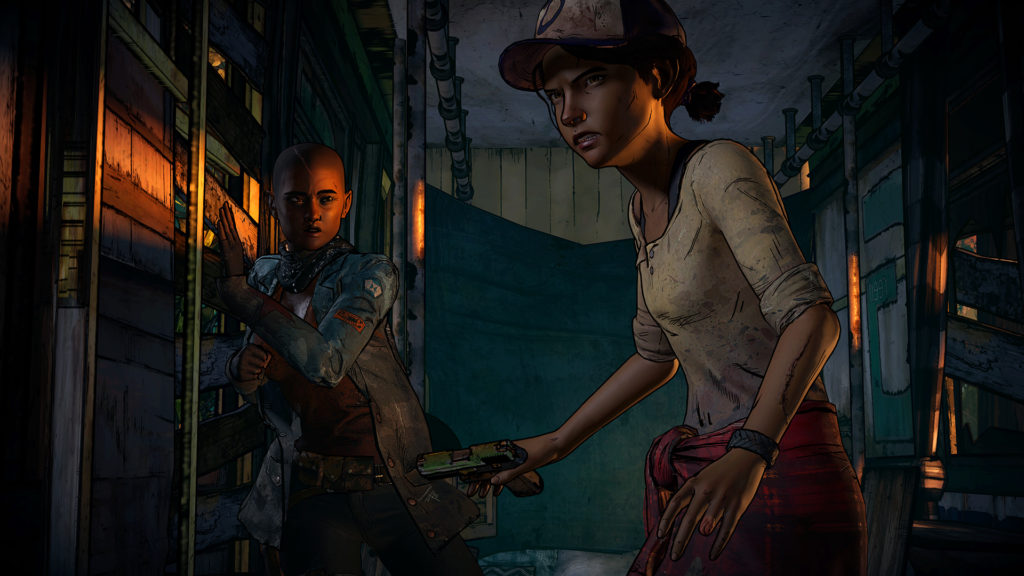 Here’s why I think that: Clem is cold, calculating, and unbelievably smart. She sees the world as a chess match, ten steps faster than anyone else. Most importantly, she understands and believes in the unpredictable nature of humanity. She takes a tree down in front of the New Frontier truck driver early on, not to save Javier, but to stop the truck. Why do so if she wasn’t saving him or looting goods? Personally, I think the driver was trying to leave The New Frontier, which Clem was okay with, as long as he didn’t take her belongings. Killing the weapons dealer Eli in Prescott wasn’t just an enraged act–it was taking out the possible resistance. Without a gun supply, how does Prescott fight back against invasion? We, as Javier, don’t know that Eli sold her those bullets, but we know Clem, so we trust her word.

Clementine stays behind to get vengeance on the men who killed Mariana, but then we see those same men follow her (closely but not close enough to kill her) to Prescott. She’s willing to kill a few of them to save face in front of Javier because to Clem, gaining his trust and the trust of Prescott is more valuable than a handful of dudes with guns. She’s playing the long con. The most damning evidence against Clem is that SHE is the who suggests that the group goes to Richmond and when Jesus tells them it’s overrun with The New Frontier, she doesn’t question him because she’s not shocked, she’s angry. She can’t go to Richmond with them because not only do they know who she is, but she’s important, and that recognition would blow any trust she might have with Javier and his group.

I don’t think that Clementine leads The New Frontier because of some misguided lust for power–Clementine knows full well what power gets you in this world–but instead, I think because of her penchant for uniting people behind her abilities, the position is thrust upon her and she has to use that power for her belief in the greater good. Once she has Javier’s trust, his dependence on her for survival, he, like us as players, is wrapped around her finger. It’s not a “join us or we kill you” proposition but rather a “join us or you die out there without me” exchange. Clementine clearly has a way with getting people to follow her, and I argue that she has successfully done so with The New Frontier, and she sees in that unification that humans might actually be able survive, instead of dying off one by one in their small, confined groups. Clem, of all people, has seen what group war and in-fighting can do to the human race. By uniting the “bad guys,” she can become a force for good, but to do so, she needs weapons, vehicles, and manpower.

Telltale has been criticized for its illusion of choice in their episodic games. While I won’t deny the truth of that assessment, I argue that Clementine becoming a villain would put a unique spin on that argument. No matter what we choose as Javier, we the players, have shaped Clementine. Our choices to make her a stronger, more capable character have led her to this moment, this moment where she actually betrays us, the fans. I suspect that at some point throughout the season we will have to choose between staying with Clementine and her New Frontier or facing the harsh post-apocalyptic world, without her help.

(I recognize that Clementine as a villain would be a huge twist, one I’m fully in support of, but even if you disagree with my theory, you can’t deny that Clem has acted suspicious as hell in the first two episodes of The Walking Dead season three.)