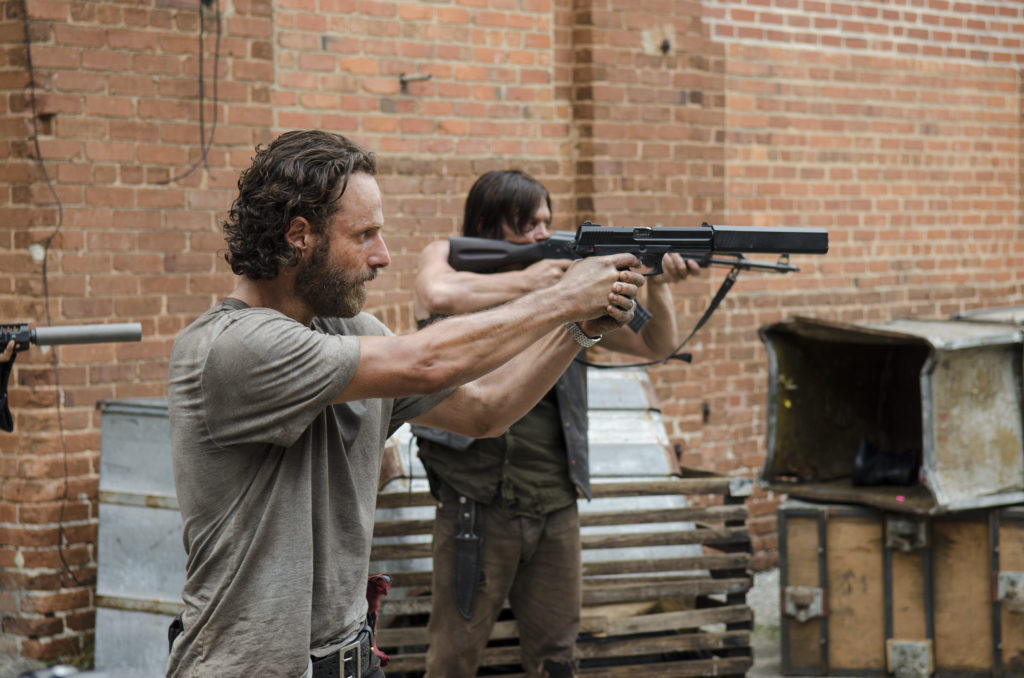 With the midseason finale looming, The Walking Dead devotes an episode to gather its bearings and set up the pieces for next week.  It’s the first episode this season to feature all of the main cast; Beth attempts to save Carol at Grady Memorial Hospital while Rick leads an expedition to rescue them, Father Gabriel struggles with the horrors he’s seen at the church, and team GREATM (coined by Tara, using the first letters of each member’s name) tries to recover from Eugene’s revelation.  While not as focused as previous episodes this season has been, there are a lot of small character moments and enough zombie gore to make it through the obligatory place setting.

There’s a loose theme of trust and faith that runs throughout the episode–namely,the vulnerability of compassion and the various ways in which we depend upon others .  An inherently cynical show, viewers are frequently reminded that there isn’t much room for optimism and compassion after the dead have risen.  Moral compasses pay the price for their conviction, while the rest either know better or are punished for such human follies as trust and mercy.  Such ethical and philosophical ambiguity will never truly be resolved, but the show must constantly navigate the balance between the harsh realities of survival and the faith and optimism that keeps us human.  The former keeps the show exciting, while the latter keeps the characters relatable.

As Rick details a swift and ruthless assault on Grady Memorial, it is once again up to the likes of Daryl and Tyreese to convince him to capture and exchange hostages instead, a more humane but less certain option.  Rick acquiesces, and the group goes about ambushing two officers.  One of the hostages, Lamson, recognizes Rick as former police like himself.  It’s another in a long line of tenuous connections from suspicious strangers, but one can’t help but sympathize with Rick’s desire to let his guard down a little.  As always, Andrew Lincoln does a great job showing the burden of responsibility that weighs so heavily on Rick, and the very subtle relief that washes over Rick when a perceived danger has passed.

The arrival of a third patrolman from the hospital complicates the situation briefly, and leads to a tense one-on-one fight with Daryl in a firebombed parking lot littered with melted zombies.  This season has also been really great at coming up with more creative and gruesome situations involving walkers; the napalmed zombies melted into the asphalt this episode were particularly striking, and Daryl’s use of a zombie’s skull to bludgeon his attacker was awesome and comical in equal measure.  Despite the countless red flags, Daryl manages to talk Rick out of executing the third officer, arguing that three hostages are better than two. 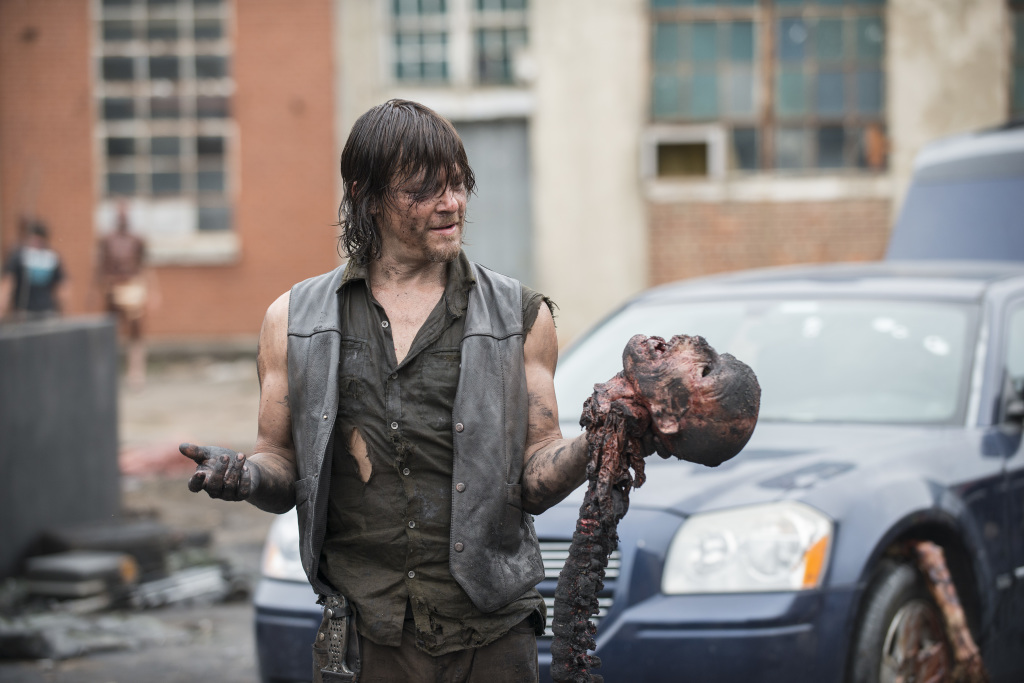 Meanwhile, Carl and Michonne remain at the church with Gabriel to fortify defenses and watch over Judith.  Gabriel, still distraught at the brutality he’s witnessed, tries in vain to scrub the blood from the floor.  The metaphor is laid on pretty thick here, but I liked the various shots of the church being slowly dismantled and turned into a fort (the organ pipes being converted into giant spikes was a nice touch).  Trying to teach Gabriel self defense, Carl matter-of-factly explains the many (obvious) reasons for Gabriel to learn how to handle a weapon and how to best wield the machete that Gabriel chooses.  The camera lingers on Michonne’s face as she realizes the extent of Carl’s lost innocence, and she attempts to reassure Gabriel that everything they’ve done to protect each other has been worth it.  It’s not enough to convince Gabriel, however, who pries up some floorboards and flees the church.  Unfortunately, he can’t outrun his crisis of faith or all the symbolism around him–a nail pierces his foot during the escape and a golden cross on a necklace prevents him from crushing an attacking zombie with a rock.

Abraham is more or less exactly where we last saw him: on his knees in the middle of the road.  Eugene remains unconscious, and the others attempt to gather their bearings while they wait for him to wake up.  Tara copes with plenty of awkward humor (and a yo-yo she finds) while Rosita gets the bare minimum of backstory, but team GREATM’s subplot is nicely grounded with Abraham’s quiet struggle back from the edge.  It’s a very minimalistic but surprisingly impactful arc for him, and a testament to the writing’s short and effective characterization.  Even Eugene, who spends the entire episode unconscious, is given a small moment of characterization when Rosita makes use of a basic water filter that he taught her how to make.

Back in Atlanta, Sasha is coping with her grief over Bob’s death, a weakness that Lamson ultimately exploits in order to escape.  At Grady Memorial, the outspoken and spunky Beth continues her badassery to keep fellow badass Carol alive. When Dawn makes the decision to pull the plug on Carol to appease one of the officers, she also gives Beth the key to the medicine locker.  After confronting Dr. Edwards to learn what medicine Carol requires, a quick bribe of strawberries to a fellow ward buys Beth the distraction she needs to steal some epinephrine from the locker.

Everything this episode is in service of setting up the big confrontation in the midseason finale and getting all the little ducks in a row before the break.  Every character and story arc received only a few precious moments of screentime, but the episode mostly succeeds by finding small, impactful moments to strengthen the bonds between the characters.