Chestnuts on an open fire. Mistletoe above the doorway. Pepper spray at the local Walmart. Yes, the holidays are finally upon us, so it’s time to break out all those sentimentally delightful songs and movies that bring cheered spirits, glad tidings and…boobs? Yeah, sometimes boobs. After all, those are the earmarks of a really good holiday movie. The ones that percolate just above the surface of the badass that is Jimmy Stewart and his Wonderful Life. The outliers. This (bi)weekly-ish column aims to have your holiday goose gander at Christmas movies that some might consider inappropriate, but always manage to light some holiday cheer. 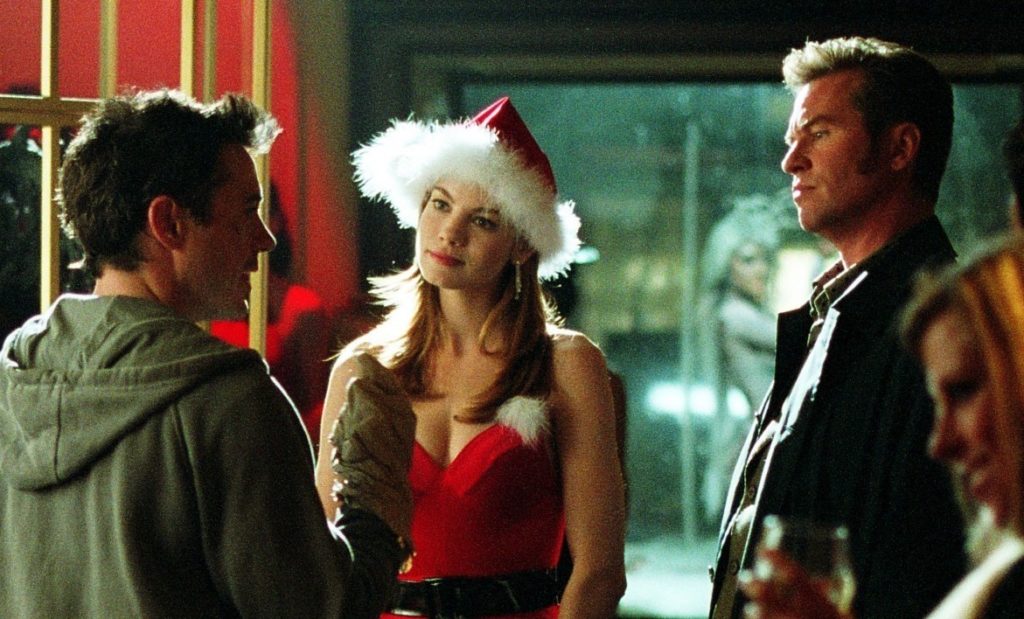 “I shot him with a small revolver. I keep it near my balls.”

Not exactly typical dialogue for a Christmas movie and yet Kiss Kiss Bang Bang is filled with these zingers as well as appropriate amounts of holiday merriment, albeit shown from a parallax view of that soul sucking city of legend, Los Angeles. Kiss Kiss Bang Bang is a film noir disguised as a Christmas movie disguised as a film noir and, like any kid on the eve of returning back to school, you’re only sad when it’s over.

The opening images of the film are startling in that the last time we saw Robert Downey Jr. treading water at a Christmas party in the superficiality of L.A., it was twenty years prior in Less Than Zero, a less than perfect –but nevertheless still-mesmerizing- adaptation of one of the greatest American novels of the last fifty years. Hell, even the mansion that the party is held in looks like the same one from that hedonistic film and I’m sure that’s no coincidence. Now though, Downey looks as if he has been put through the meat grinder, out of place and bemoaning in nouvelle-noir voice-over of how last Christmas was world-changing, or, as his character Harry so succinctly puts it, “now I go to parties where if a girl is named Jill, she spells it J-y-l-l-e; that bullshit? Welcome to L.A. Welcome to the party.”

As of late, Harry was once a small time crook on the east coast who, when a particular holiday robbery is botched, gets shot in the arm and accidentally stumbles into an audition that becomes real when the read-through scene serendipitously speaks to what has just unfolded in Harry’s real world. Now, based off of that fucked-out audition, Harry has been brought to Los Angeles to screen test for the movie in question, with the help of Gay Perry (Val Kilmer), a consultant that the production company has hired, also for the film in question. So is Gay Perry actually gay? “Gay? Oh, no. I’m knee-deep in pussy. I just like the name so much I can’t get rid of it.” So, Yes, is the answer to that question. Perry is also a private detective who the producers hope will drop some pearls of wisdom onto Harry and prep him for his big screen debut.

Enter Harmony (Michelle Monaghan), small town girl with big city dreams who read copious amounts of pulp fiction featuring Johnny Gossamer, private dick, as a child which helped develop her acting bug. Turns out Harry and Harmony used to be friends when they were kids and by some simple twist of fate, they are at the same Christmas party. Things start well but end badly for that rekindled relationship, but it’s nothing that Harry can tend to at the moment, because he has a date with Gay, one that has them witness to a car they are tailing suddenly careen into a lake. Perry is able to save a girl from the sinking auto, but she is already quite dead. When two ski-masked men enter the picture and Perry realizes he has been hired to witness a murder, things escalate rather quickly for the newbie actor and the private dick. 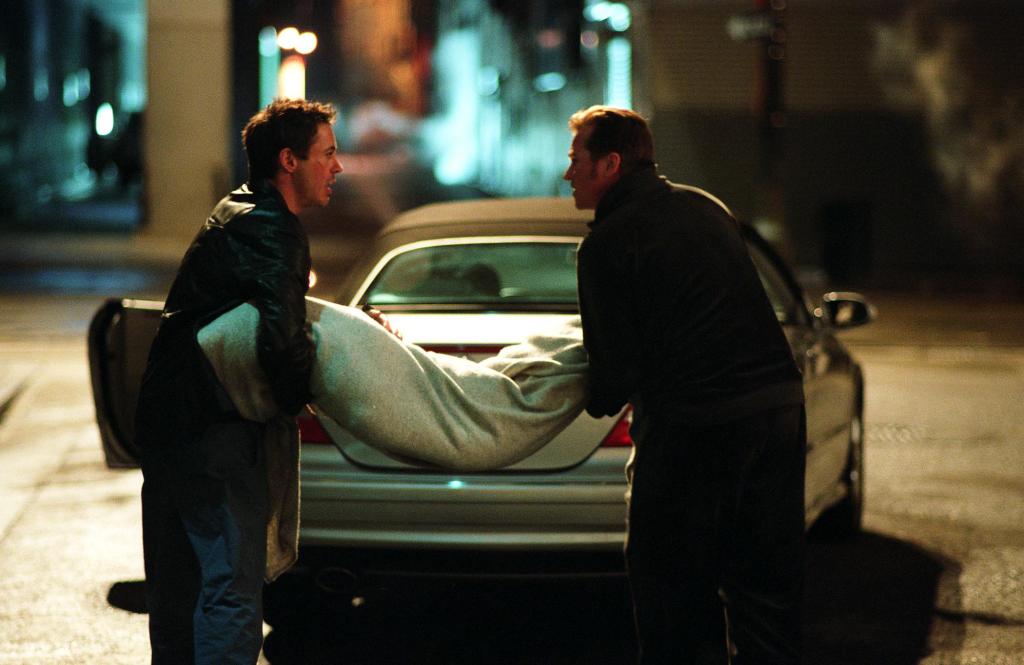 Things really heat exponentially when Harry finds out from the police that Harmony has killed herself, only to find her at his doorstep hours later. It was, in fact, Harmony’s sister who committed suicide and found with Harmony’s ID on her. Believing that Harry is a real detective and that her sister did not take her own life, she asks for his help to find her sister’s killer, to which he reluctantly agrees. Could it be that this case and the lady in the lake are somehow connected? Definitely. How are they connected? That’s not as clear and that’s the fun of Kiss Kiss Bang Bang.

Loosely based on Bodies Are Where You Find Them, a novel by Brett Halliday, Kiss Kiss Bang Bang is thrust into the modern age with an assist from writer/director Shane Black, the brains behind Lethal Weapon, Monster Squad, and the upcoming Iron Man 3. Black’s writing is nothing if not engaging and edgy and his take on the Film Noir genre is an unforgettable one. “I was wetter than Drew Barrymore at a Crunch Club,” says one particular Marlowe-esque line of Harry voice-over upon crawling out of a dirty lake. There are severed appendages. There are nail-biting shootouts. There is a flying coffin. And yet, it is still one hell of a Christmas movie. It’s one of those films where everything just sort of magically works. The performances are all pitch-perfect, it’s photographed beautifully, the production design is accurate, and (of course) the script is fantastic.

Historically, Kiss Kiss Bang Bang is important in that it is the watershed moment that put Downey, Jr. back on the map for most people. It’s also worth mentioning that the film’s Writer/Director Shane Black later re-teamed with Downey Jr. for Iron Man 3. The picture didn’t take in a boat load of money, but given the various peaks and valleys of his career, to turn in a performance in a movie like this, seemingly out of nowhere, made people remember what a capable and stupidly talented artist he is. Doubly for Shane Black, who went AWOL for seven years after his previous project before showing the world once again what a humble badass he can be. Kiss Kiss Bang Bang starts with Harry Lockhart committing petty robbery in the hopes of making seasons bright and it ends with him solving a murder mystery, saving numerous lives, and reclaiming some semblance of a normal life. If that’s not a Merry Christmas, then I don’t know what is.