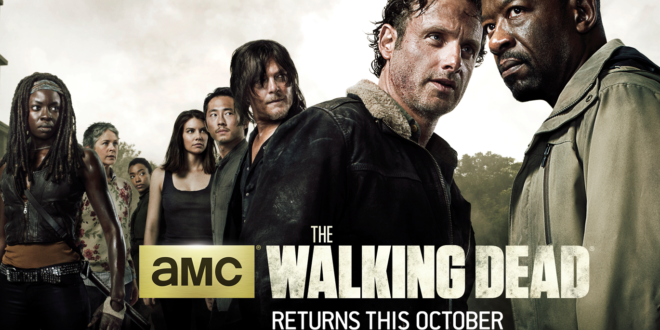 AMC’s The Walking Dead announced at Comic Con a premiere date of October 11th for its sixth season and along with a lengthy and exhilarating trailer.

There was speculation that Rick and Morgan might come to blows this season and this trailer confirms it. Along with this struggle comes more walker invasions and some innocent people who are sure to meet death in gruesome fashion.

To get fans pumped up for the sixth season, beginning July 26th, AMC is running a single-season marathon every Sunday leading up the show’s premiere. Furthermore, Chris Hardwick’s “Talking Dead” will offer fans an early look at the show on August 23rd at 8PM EST/PST. The “Talking Dead Season 6 Preview Special” will grant viewers a behind-the-scenes look at the show, as well as interviews with the cast and crew.

Don't let the fancy nerd duds deceive you; Jen’s never been described as “classy.” You can find her on Twitter where she stalks all of her favorite celebrities: @jenstayrook. Or you can find her on Steam or Xbox dying in every game she plays as "Rilna." Email: jen.stayrook@theworkprint.com
@jenstayrook
Previous Doctor Who Season 9 Premiere Date Announced, Trailer Released
Next The ‘Con Man’ Teaser Trailer Is Made of Rainbows And Puppies And ‘Firefly’ Goodness