‘The Vanishing of Ethan Carter’ Review: Storytelling at its finest

“This game is a narrative experience that does not hold your hand.”

This warning greets you at the start of The Vanishing of Ethan Carter and I’m not sure truer words have ever been uttered in a video game. Developers The Astronauts have built a game that will test your attention to detail and patience… for better or worse.

You play the role of Paul Prospero, a paranormal investigator. Letters from a young boy named Ethan, have brought you to Wisconsin in 1973 for your latest case: the disappearance of Ethan. In said letters, Ethan has described happenings and events that no child should have knowledge of. Why Ethan knows this and why he has disappeared is the driving force and one that is handled beautifully throughout.

As I mentioned, The Vanishing of Ethan Carter is a narrative experience. (*Editor’s note: actually the Developers mentioned it, you just agreed.) You control Prospero through the first person perspective with limited functionality. You can walk, sprint, zoom in and interact with the environment. These stripped down controls serve to put the story front and center. Your goal is to “solve” numerous events throughout the area and through these events you are rewarded with pieces of the mystery.

While the drive to discover more about Ethan and the forces at play here is strong, the triggering and “solving” of these events is where the game loses some of its luster. Instead of environmental puzzle with clever solutions, often times success is dependent on scouting every inch of the map. Solutions were never satisfying and I found myself often wishing I was watching someone else play, rather than play it myself. A consequence of this choice in “gameplay” is that it is entirely possible to miss and skip over an event. Thankfully, the developers realized this and built in a mechanic late in the game that allows you to go back to an area where you missed the event. They even send you on your way with a rather large clue. So much for not holding your hand. 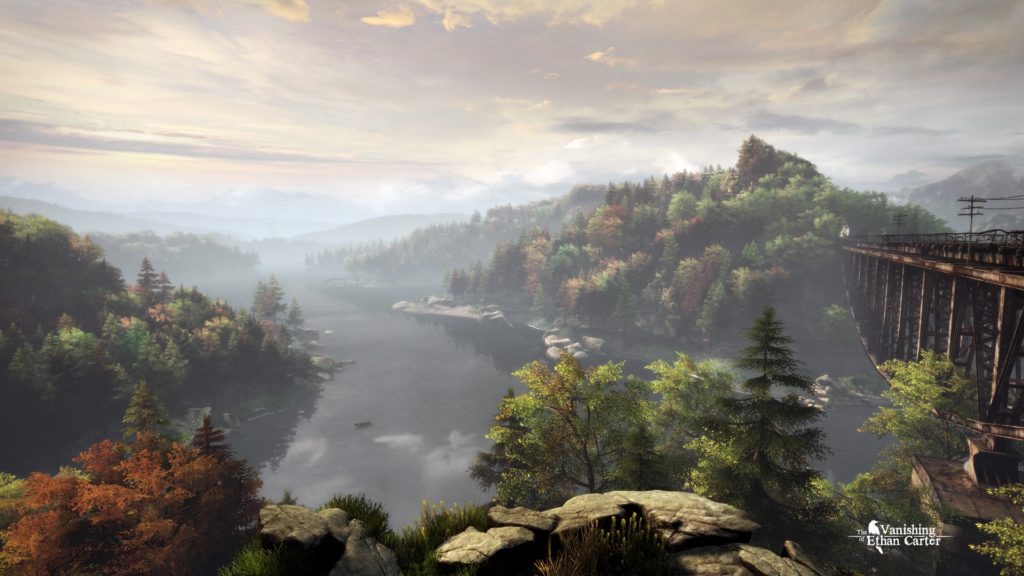 While searching every inch of the land is tedious, at least the scenery is gorgeous. I often found myself taking a moment to look around the forest at the attention to detail in the trees, or standing on the edge of a cliff admiring the sun’s reflection off of the body of water in front of me. In the game’s port to the PS4, The Astronauts have the game running on the Unreal 4 engine and it shows. Beyond the technical achievements, the art style is also fantastically eerie. The lack of life, and the quite of the Wisconsin countryside adds to the supernatural creepiness of the game’s story. It’s a world that feels real and lived in, despite the emptiness.

The Vanishing of Ethan Carter is a difficult game to recommend. It is, however, a very easy “experience” to advise. While I’m torn as to whether or not I was actually having fun throughout the 4 hour campaign, I was driven to continue playing it. The desire and tension you feel throughout are something special that is rarely felt in video games. The level of storytelling is such that everyone should give this game a shot… as long as you know what you’re getting yourself into. And luckily The Vanishing of Ethan Carter makes sure you do.

Reviewed on the PS4. Also available on PC.