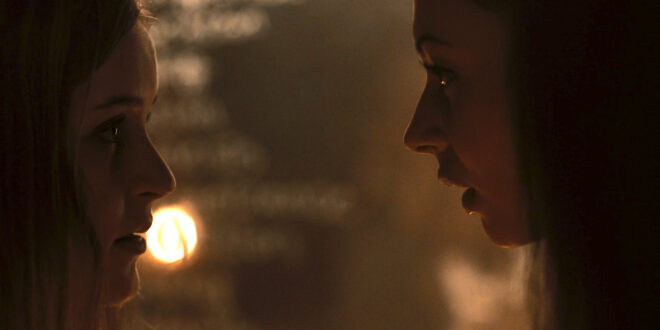 ‘The Twilight Zone’ Season 2 Episode 5 Review: “Among the Untrodden”

Another day, another Season 2 review of The Twilight Zone on CBS All Access. Here is Episode 5, “Among The Untrodden.” How did it do and what did we grade it?


“Among the Untrodden”
Available on CBS All Access
GRADE: A-

Irene, the new girl at St. Mary’s, moves a bunch of candles, a stack of Zener cards, and texts pertaining to various psychic phenomena into the old girl’s bathroom in the basement. Her intentions are to study and examine her new friend, Madison, who is one of the more popular girls in the school. Irene has an obsession with the unknown — and Madison scored a “0” on all of Irene’s “Are You Psychic?” tests. Madison (who, at first, treats Irene like dirt) reasons that it simply means she’s not psychic…but Irene tells her that, even if she didn’t have psychic powers, you’d still get 4 or 5 right, on average, by way of pure luck. Irene suspects that Madison does have psychic powers. She’s just suppressing them. So goes the set-up for one of the best episodes the new incarnation of The Twilight Zone has given us.

Madison (debuting actress Abbie Hern) is the “leader” of your stereotypical school clique, the type that eats together, studies together, plays together and, of course, picks on the new girl together. “The new girl”, in this case, is Irene (Sophia Macy of The Layover), an unkept, ratty-looking blonde, that defies her appearance by kindly saying hello to her new classmates and tries her best to fit in, which immediately makes her fodder for Madison and her friends. They try to get into her head with a quiz that asks her why she’s here. The only options available for Irene to circle are “Because I’m a slut” and “Because I’m a loser”. Madison throws a pencil at her head when she refuses to answer — and, immediately, that pencil turns to dust…of course, nobody saw it happen…or did they?

Irene attempts to get to Madison, using her failed psychic tests (for the school’s science fair project), and the two inexplicably bond and become friends after Irene not only proves that Madison is gifted (she can, indeed, read minds), but helps her to improve her powers. All Irene wants in return is to be part of Madison’s clique. She just wants to be a “normal high school girl” and drink beer and get high on the school balcony “where nobody ever goes.” So, while Madison begins using her mind-reading powers to pick on other kids and learn the dirty little secrets of the hall monitors, teachers and other school staff, Irene straightens her hair, learns how to properly apply make-up, and, eventually, gets her wish, drinking beers on the roof and getting high with Madison’s friends. Soon, weird things begin happening. Madison is able to conjure items she’s otherwise unable to obtain (which turn to dust when they’re used for their purpose) — and, when Irene seemingly falls off the school roof to her death, Madison is able to revive her just by thinking about it — only to see Irene become more popular than she is.

To say any more would be plain criminal.

One of the stories The Twilight Zone has been missing from its repertoire is a good coming-of-age story. We’ve been privy to down-on-their-luck actors and comedians, we’ve seen the end of the world about a half dozen times, we’ve seen Rod Serling, himself, return to help a fellow writer out. “Among the Untrodden” teases like it’s the story of a master and pupil reaching the same level and eventually butting heads — but it doesn’t give us that. Even with the beautifully Gothic production design, David Lynchian ambient Trip-Hop, and alternative indie rock, the episode (written by former SNL scribe Heather Anne Campbell, who penned last year’s episode, “Not All Men”) ends up being an incredibly clever tale of two girls who simply want acceptance and happiness.

The two actresses, newcomer Abbie Hern and the relatively new Sophia Macy, are absolutely perfect with a ton of chemistry. Hern portrays Madison as the Alpha Dog, and you find yourself wishing that Irene won’t make it worse by teaching her to bring out her abilities. At one point, Madison warns Irene that she will destroy Irene’s life if all this goes south — and you believe her. Madison derives a perverse pleasure by squashing people she doesn’t like as if they’re insects. But, then…is Madison really the one with powers? Or does Irene know something she doesn’t? Why would she freely teach Madison to be worse than she already is if she wouldn’t be able to control her later? This question grows louder in your head after we witness Madison’s clique turn on Irene, and humiliate her in front of the entire school by posting video of her drunken rantings — causing Irene to scream, shattering all the video screens displaying the videos of her and telepathically dropping all three girls in the clique to the floor like 3rd period Spanish.

The outstanding set design is smoky, haunted noir as the girls wander dark hallways and light candles in the old, run down girl’s bathroom. The music is like a character in and of itself: as Irene readies her study with Madison, “Roads” by Rose of the West plays, signifying the road the two will begin to travel together. When Irene pimp-walks into the lunch room, having mastered reading minds, Kimbra’s “Top of the World” pulses across your speakers. Mrch’s “Impulse” plays as Irene begins acting more and more…well, impulsive, by drinking to the point of excess on school nights.

And all of it culminates in an beautiful ending, which is darkly poetic and moving as the Wordsworth poem it takes its name from.

With its intensity, emotion, slow-burning creepiness, and great acting, “Among the Untrodden” stands as one of the best, if not the best episodes of the brand-new Twilight Zone.

Matt Perri is one of those literary Ronin you’ve never heard of until he shows up and tells you he’s a literary Ronin. He’s a native Californian, a film buff, old school gamer geek, and a sports/entertainment fan. A lifelong Giants, 49ers and Sharks fan, he also covers the world of pro-wrestling, writing recaps for WWE Monday Night RAW and Total Divas at Scott’s Blog of Doom. You can follow the guy on Twitter via @PerriTheSmark as well as here at The Workprint and his own blog, Matt's Entertainment.
@PerriTheSmark
Previous ‘The Twilight Zone’ Season 2 Episode 4 Review: “Ovation”
Next ‘Stargirl’ Episode 7 Review: “Shiv Part One”