‘The Tombs’ Takes Us Into a Paranormal Asylum

Part steampunk, part historical fantasy, sprinkle in adventure, grit, and colorful characters, The Tombs tells the story of sixteen-year-old Avery Kohl who desperately wants the life she once led before her mother was mysteriously taken into a malevolent asylum filled with secrets.

The world author Deborah Schaumberg creates is dark, intense, and gritty, but it’s also rich with history and intrigue. When we first meet Avery, she had just tried to see an old friend but was rebuffed and the cold reality of her life is made abundantly clear. She then makes her way to The Works, an iron factory where she labors a welder. It’s important to note that she’s the only female welder in employment. Avery learned her skills from her father who was a mechanical whiz, but he tended to drink more than he worked after her mother was kidnapped. She endures long hours in terrible conditions with little pay in order to keep her family afloat. Trouble starts however after an accident at the factory that causes a big explosion. Avery thinks she is responsible after beginning to exhibit the same signs of madness her mother had. Except it isn’t hallucinations but a burgeoning psychic gift, the ability to read people’s auras and see their memories.

The journey Avery takes of self-discovery is not an easy one as she struggles to understand the changes she is experiencing. She takes a big risk by going to the Tombs by herself in order to see her mother and ask about the visions she started seeing. She now suspects that the older woman wasn’t mad after all. The visit does not turn out well when her true identity is discovered by the evil Dr. Specter who runs the facility. While Avery manages to escape with the help of her best friend Khan, the men in the crow masks begin to hunt her down and she is forced to hide to keep both herself and her father safe. Luckily however, she was able to see her mother briefly before fleeing the asylum and is told to seek Niko at the Gypsy camp.

Avery turns out to be a healer of a kind and she embarks on voyage to learn more about her abilities and discover the truth about her mother and why she was taken to The Tombs. Along the way we meet a host of interesting characters such as Khan, a long time companion who clearly feels more for her, Katalina the fiesty knife throwing Romani, Geeno the weld rat with an affinity for insects and machines, shy and timid Hurricane, and Indigo, Katalina’s brother who has strong talents of his own. As far as foes, Schaumberg gives some dimension to the villains through Avery’s gift, allowing readers to get an idea of how these men became who they are. For instance, a surly Tombs guard we meet early on seemed threatening and hateful but our heroine is able to see that he once had a dog he truly loved and this has an impact on his actions through the story.

While the pacing of this novel wasn’t the fastest, it worked because the author was able to really flesh out the characters, their interactions, the settings, and the many issues that surrounded the times. From workers’ rights to the impacts of war, child labor, capitalism and prejudice and racism against immigrants are all topics that are still very relevant today. Inclusion of these themes into the narrative resonated with me and was a stark reminder that while society has progressed since 1882, we still have a long way to go. The added elements of airships, clockworks, mechanical limbs, and automata insects were a sheer delight.

The debut novel of Deborah Schaumberg is highly recommended for fans of young adult fiction, historical fantasy, steampunk, strong female characters, and paranormal adventure. We had the chance to interview the author and she gives us a small tease on what we can expect in the future sequel.

The Workprint: It’s been such a pleasure to read The Tombs and explore this alternate world of 1882 New York. What inspired you to choose the location and the time period for your story? This was such an unexpected delight for me having just recently moved to Brooklyn myself and it felt like I was unearthing some hidden secrets.

Schaumberg: Location was easy – I was born in Brooklyn! I have always been fascinated with the history of New York. Time frame took a little longer to decide on. Ultimately, I wanted my story set pre-electricity, when gas lit streets added so much atmosphere to the setting. I also love the gritty, grimy, industrial feel of the Industrial Revolution and it certainly fit well with my steampunk elements.

The Workprint: I thoroughly enjoyed reading all about the different places, people, gangs, and businesses in The Tombs. These details added a rich texture to the narrative and would love to know what your world building process was.

Schaumberg: Research, research, research! It was so much fun to learn about the clothing, politics, events, and neighborhoods that existing at the turn of the century. I uncovered weird facts and interesting stories along the way – some of which I was able to include, like the actual Tombs building. As far as process, I built the world as I went. I started with the main places, like where Avery lived and worked and where the Tombs was located, (all real places btw). Then, if I needed her to travel by boat or hide somewhere, I found actual places that would work. I used a poster size map of 1882 Brooklyn / New York to figure out how long it would take, by foot or by horse, to get around. And I made a timeline that included my imagined storyline woven with the history. For example, the labor riots and formation of the labor unions coincided with Avery spying on a secret meeting of the Amalgamated Association of Iron and Steel Workers. (A labor union of the time period.)

The Workprint: The Tombs plays such an integral part in Avery’s story as well as in the lives of other characters, what drew you to write about an asylum with many dark secrets?

Schaumberg: I must have a dark side! I loved how creepy the true history of the Tombs is. I loved that it was really built over the collection pond for blood and guts discarded by tanneries and slaughterhouses! Where else would the evil Dr. Spector and his crow-men carry out their dreadful deeds?

The Workprint: Which characters did you enjoy writing the most? Which were most difficult?

Schaumberg: Ooh, so hard to choose. I guess top two would Avery and her father. His young-at-heart, endearing personality reminded me of my own father, (minus the drinking), and I loved their close relationship. I also particularly enjoyed writing Hanover Gentry, the adorable chemist living in the Tombs. Most difficult would be Dr. Spector. I wanted his depravity to feel real and fleshed out as a character, without delving too much into his back story. (Saving that for Book 2!)

The Workprint: Did you have a favorite scene to write and what was the most difficult one?

Schaumberg: Another tricky question…one of my favorite scenes to write was when Avery finds the exquisite greenhouse hidden within the Tombs. I loved the contrast of its beauty to the darkness of the rest of the asylum. Most difficult…the ending. I actually ended the book earlier but my editor at Harper asked me to close up some loose ends. I added two more chapters!

The Workprint: What do you hope that readers take away from Avery’s journey thus far?

Schaumberg: So, I would love readers to come away with a feeling that we are all connected. That our energy affects those around us. But what I’ve learned is that readers connect to The Tombs in many different ways. I love when they reach out and tell me what they came away with.

The Workprint: The ending was a major cliffhanger with Indigo, Khan, and Katalina still on the ground, do you plan on writing a sequel and if so is there anything you can tease about where these characters find themselves next?

Schaumberg: I do plan to write a sequel, as I hinted above! And without giving away too much, I can tell you that Avery will face Dr. Spector again, but this time she will know a secret from his past.

The Workprint: Lastly, what helped you most during the writing process for this story?

Schaumberg: Coffee…chocolate. In that order.

The Nerd Girls Books Blog Tour is also doing a giveaway! Check out details below for a chance to win one of the books. 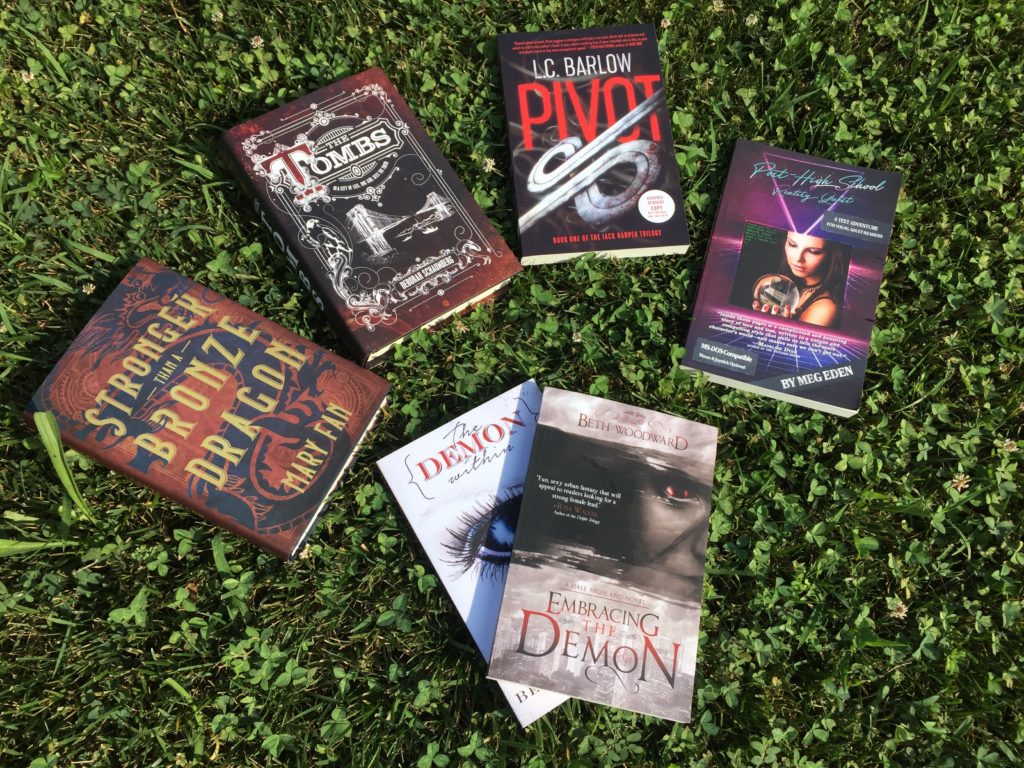 Along with the tour is also a special Nerd Girl Book Giveaway where you can enter to win a free copy one of the books above. Clicking the link or select below. Ends after July 31st.

We’ll be covering the Book Tour from July 28-30th, but you can also catch-up and follow along Nerd Girl Books on twitter to read other reviews as well. Schedule below. 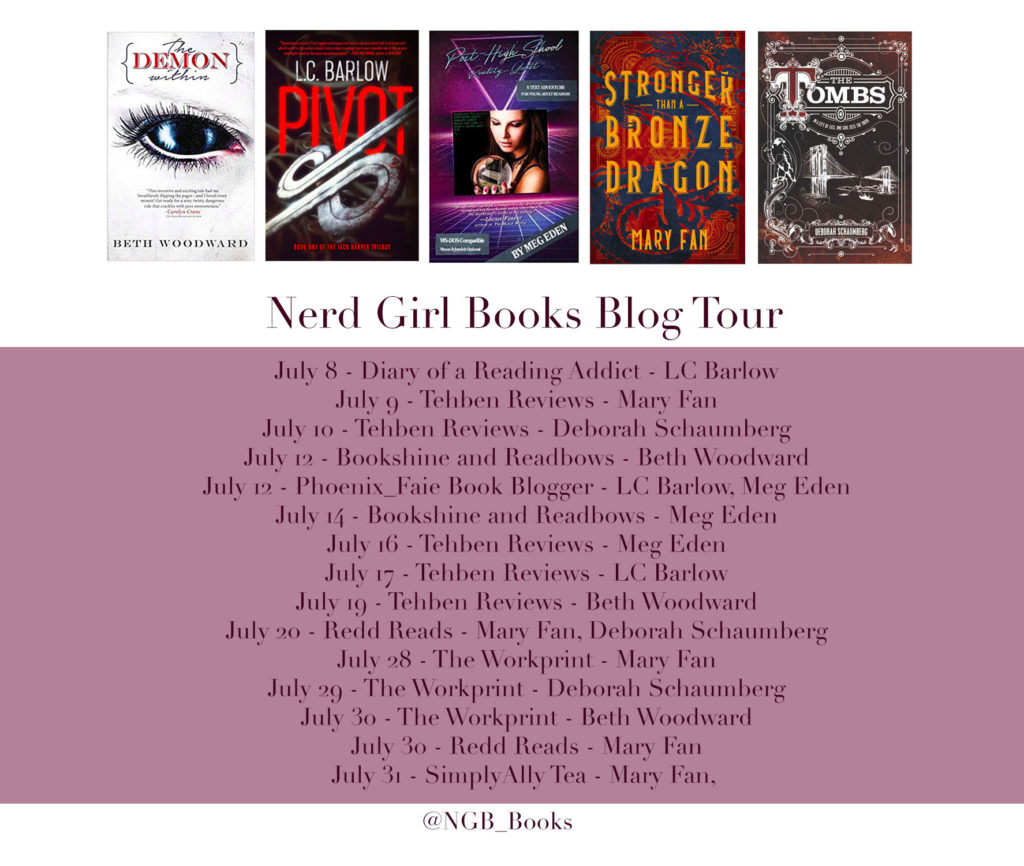 Previous article
Once Upon a Time in Hollywood Review: Fun but Leaves a lot to Desire
Next article
‘Anima’ Review: Finding Love in Dreams