‘The Nun’ Review: A Disappointing Entry in the ‘Conjuring’ Series

Warner Bros. and New Line are back with their latest entry in the Conjuring universe – The Nun. Centering around Valak the Defiler from The Conjuring 2, The Nun takes the franchises creepiest demon and gives us a supernatural origin story that lacks the staying power of the mainline movies.

After a nun commits suicide in a remote, ancient abbey, The Vatican sends Father Burke (Demian Birchir), an experienced exorcist, and Sister Irene (Taissa Farmiga). a nun in training, to investigate the incident. It quickly becomes apparent that all is not what it seems. The locals who live near the abbey want nothing to do with the abbey. It’s only in Jonas Bloquet’s Frenchie, the man who found the dead nun hanging from a rope, that the spiritual duo finds assistance in getting to the secluded abbey. Upon arriving, it becomes quite apparent that an evil force is at play and everyone is way over their heads. 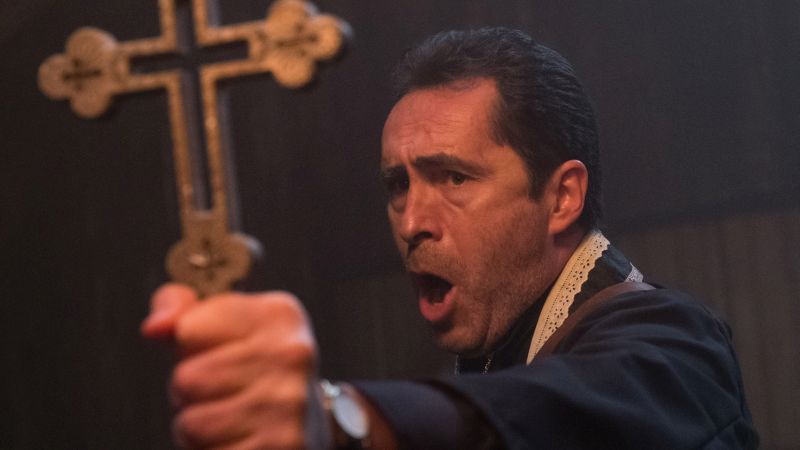 Performances are a mixed bag when it comes to The Nun. Taissa Farmiga does a fantastic job as Irene, dealing with the brunt of Valak’s nightmarish deceit. It would be easy to say that Farmiga was the standout of the film, but a part of that is due to the fact that she is the only well-written character in the entire movie. Demian Bichir’s Father Burke, on the other hand, comes across as one of the most pointless characters I’ve seen in a long time. Outside of bringing Irene to the abbey, Father Burke accomplishes nothing even though he is a trusted exorcist of the Vatican. None of this is Bichir’s fault, as he plays the character well, but with the writing.

I’ve always found the religious horror to be a fascinating genre ever since I watched The Exorcist as a child. It’s no surprise that I quickly fell in love with The Conjuring series, with its strong storytelling and concentration on characters. While the films dealt with demons and exorcism, there was a strict mythology that grounded the supernatural in reality. The atmosphere and tension hung heavy in the air no matter where I watch those films – either it be at home or in a theater. There was a feeling of it being so real. Sadly, none of this reigns true when it comes to The Nun.

Countless times the film draws up a supernatural zombie, serpent, ghosts that it has no way of explaining. Father Burke finds himself haunted by the victim of a botched exorcism from his past. Common sense would tell him its a trap, but like the plot, there is no sense to be found.

Not all is bad though. The Nun does offer up some great set dressing and scares. As infrequent as the scares are, I did find myself jumping a few times over the course of the hour and a half runtime. However, don’t expect a quality of scare or tension from the mainstay Conjuring movies. Nothing comes close to scene in The Conjuring 2 between Lorraine and the painting of Valak. If you’re still interested in checking out The Nun, I’d recommend waiting for it to hit rentals.