‘The Muppets’ review: Piggy, under the influence of Josh Groban

It’s a normal day at the production office for Up Late with Miss Piggy. A company birthday card for Sweetums is making the rounds, Bobo is selling cookies so that his daughter can have that prize mountain bike, and Piggy’s just a little upset. That last bit’s probably a problem because everyone and everything suffers when Piggy’s not a happy camper. “We’ve created a color-coded alert system to track Piggy’s moods,” Kermit tells the camera. “Green, she’s calm — but we’ve never been at green. Yellow, she’s in tears. Orange, I’m in tears.” The camera comes in on Kermit’s panicked face as he divulges the last level: “Red, she locks eyes with you, it’s already too late.”

Far too late: Piggy has an epic meltdown, trashing the office and destroying workers’ desks, criticizing them for having pens and highlighters and back-scratchers. She runs wild, demanding to know who replaced her thick-tip Sharpies with fine points. She can’t even be calmed down with cake — even when she eats it. Uncle Deadly speculates that it might be a result of how she looked in her new dress — until Scooter reveals that Piggy doesn’t have a date for The People’s Choice Awards. 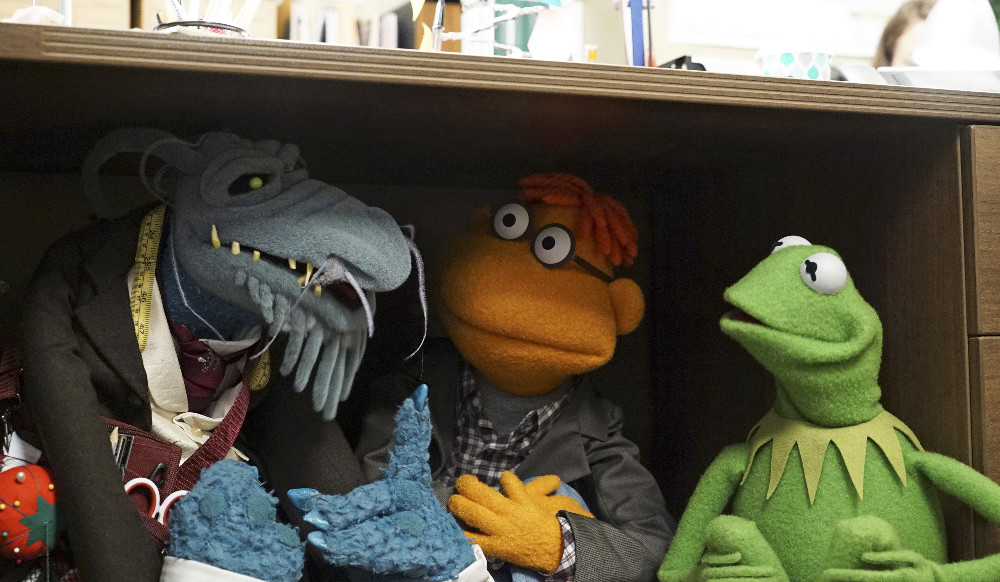 On top of that, there’s nobody willing or available to be Piggy’s date. Keanu Reeves has “gained 100 pounds” because he’s shooting a biopic about a Hawaiian ukulele player and Scooter, who’s usually packed to the gills with ideas, is only able to recommend his optometrist as a potential candidate — though Scooter’s not quite sure if his optometrist is attractive enough. “My glasses aren’t very good,” he tells a perpetually exasperated Kermit.

What’s a frog to do?

Enter singer/entertainer Josh Groban who is the musical guest on Piggy’s next show.

Kermit’s hatched a plan for Groban and Piggy to fall in love during the taping of their duet together (in a bit that brings back those magical memories of The Muppet Show) — and, wouldn’t you know it: it’s a smashing success. After sharing an on-stage kiss (which should make everyone really, irrationally angry for some reason — and might I add: get over yourselves), Groban whisks Piggy away to the PCA’s and everything is right with the world. Piggy writes a beautifully poetic sentiment in Sweetums’ birthday card and compliments Beaker on his hair.

Kermit is absolutely thrilled that his plan worked and that, for the first time ever, they’re at a “Code Green”:

“Since they’ve been going out, I’ve been waking up to the sound of my alarm instead of my own screams!” Kermit even does his trademark, “YAY!”

Everything is right in the world…or so it seems.

Since Groban’s also a producer, he wants to make Piggy’s show “more sophisticated”, an idea Kermit entertains — until Piggy converts The Electric Mayhem into an acoustic jazz band (every member now wears a beret and Animal gently brushes the drums) because she thinks that her viewers need “a tranquil vibe — like a warm glass of milk”. “Tranquil”, they are. Statler and Waldorf are sound asleep.

“What was that one called?” Piggy asks the band after the re-join number.

“‘Dead Inside’ — we wrote it today.” Dr. Teeth groans, representing the rest of the band’s sentiments toward their “hip” musical re-birth. 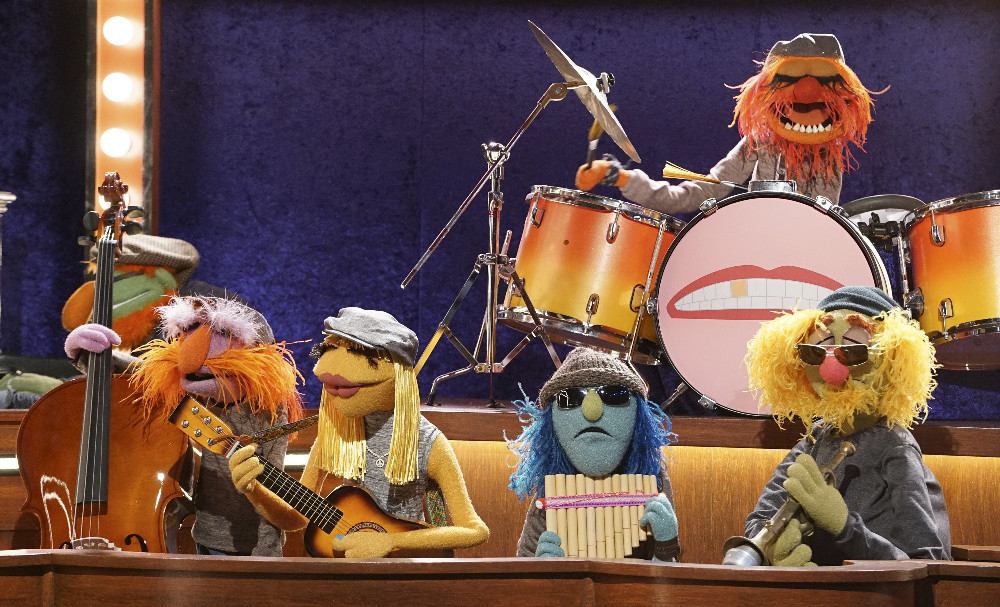 Even her guests are more intelligent: historical biographer Reza Aslan joins the show — only to see Piggy belittle him for being creatively “lazy” because he “writes about things that happened” in his books instead of “using his imagination” like every other author. When Piggy tries to get on his level (she criticizes local libraries for “giving away his book for free”), Aslan is left completely speechless.

Besides “flooring his studio golf cart” around the studio lot (it’s a 5 MPH zone but Kermit likes to go “6 or 7” when he’s frustrated), his only option is to get rid of that “horrible, evil, incredibly talented, velvet-throated piano god”, Josh Groban. This, despite the protests from the crew of Up Late due to the wonderfully positive feedback about Piggy’s recent behavior. But it won’t be easy: he practically controls the show, belittling Kermit for being a “swamp rat that nobody pays attention to” — yet, immediately makes it known to Kermit that he loves him. He’s just speaking for PIggy. He’s Josh Groban, after all.

“Hostile Makeover” sees The Muppets gaining some footing with an effort that is a huge improvement over last week due to a more loose and relaxed swagger. Gone is this alleged “assholish” version of the Muppets (and, strangely, Kermit’s girlfriend) that the Internet somehow had a complete terminal freak-out over and in its place stands a brand of Muppets that — surprise — have always existed. Even those criticizing this week’s B-story as weak and unnecessary might need a second viewing of this episode. Fozzie’s idolatry of Jay Leno seems like a forced plot element on the surface but, in reality, it works — not just because of the irony of the situation (Fozzie steals — then accidentally breaks — a crystal candy dish that Jay Leno had stolen from George Carlin years prior) or that we all identify with Fozzie’s failed desire to break into the comedy business via somebody who is a kindred spirit (this makes sense since they share the same goofy sense of humor) — It also has the benefit of indirectly setting up a great running joke involving Gonzo and his imperiled, ex-pat mother — which, quite literally, destroys a long-time fantasy involving Kermit and Lea Thompson in an elevator, tying the whole thing together with a Larry David-esque comical bow. 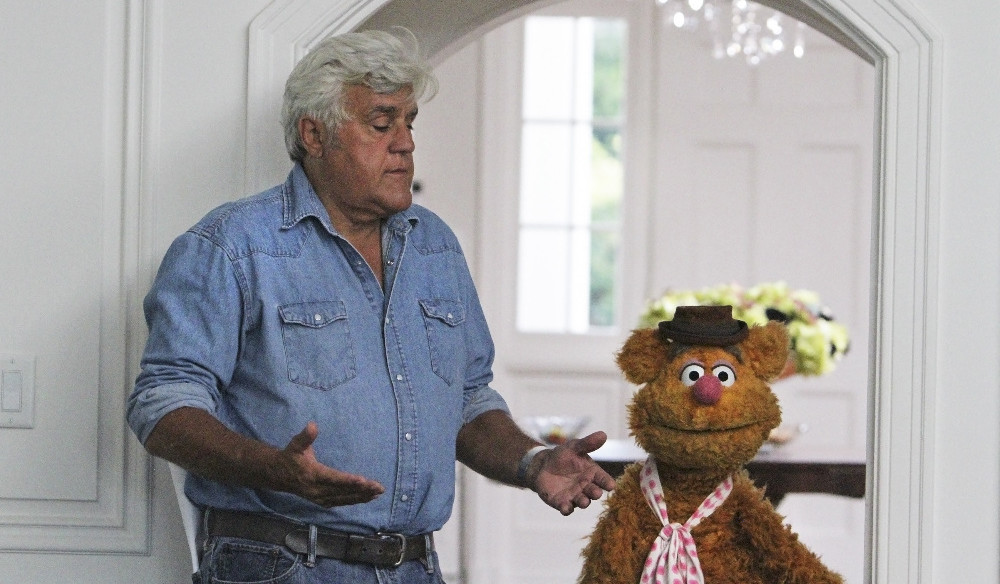 The tighter, smarter writing even serves to land the seemingly-maligned “mature” humor, something which should really be a non-issue since a) The Muppets have always catered to adults and b) their adult jokes are a reflection of the time in which they live, so when the times change, the Muppets adapt accordingly. That, in turn, results in one of the more touching parts of the episode: when the in-office cookie sales battle heats up and Bobo begins to eat all his own cookies in defeat after his sales plummet, Scooter suggests hitting up The Electric Mayhem since they’d probably be “happy to help out”.

Cut to the band, munchies in full effect, noisily wolfing down all the cookies Bobo has to offer while Bobo counts a huge wad of cash.

“Forget the mountain bike,” he says. “My daughter’s gettin’ a Prius!”

And all we can do, as an audience, is be happy.

Previous article
‘Awkward’ Recap: “The Dis-Engagement Party”
Next article
‘Scream Queens’ Reaction: It All Has To Do With Hats