This Week on Awkward: While Matty and Jake rekindle their bromance, Tamara’s engagement crumbles to pieces.

There are twenty-four days left of senior year and Tamara still has not ended her fake engagement to her Marine fiance, Adam. Every time that she has planned to break up with Adam he exercised in front of her and she is now addicted to man sweat (I think I just threw up a little in my mouth). Tamara lets Jenna know that there is an engagement party for the couple that night and that Jenna will be hosting and then swiftly departs. Jenna chases Tamara down only to find a handful of “Save the Dates” in Tamara’s bag:

Jenna: What is all this stuff? You had “Save the Dates” printed?
Tamara: Get your hands off my STDs!

I often oscillate between whether or not I think Tamara’s acronyms and comments are over the top, but then she has a line like that and I remember she is just fucking gold.

Jenna arrives late to the party she is hosting severely under-dressed and bearing a half eaten pie of pizza.

In case you forgot, Brian was that army bro that Jenna met on Spring Break, dated for a hot second and then dumped because he was incredibly boring. Jenna is angry and surprised that the her ex-boyfriend who is the BEST FRIEND OF THE GROOM dared to come to the engagement party and starts a “woe is me” rant. She decides that her mission for the rest of the party is to bitch to herself about how hard her life is while showing as little enthusiasm as possible for the happy couple.

Matty comes to the party with Sadie and Sergio as his plus two. I was really hoping that Matty would bring his new bestie Kyle to the party, and Kyle would be wearing his “Jenna Lives” t-shirt, but I could never complain about having more Sadie on screen, so I will give Matty a pass. Two seconds later, Jake barges into the party with Gabby and while everyone cowers in awkwardness of this situation, Sadie’s face lights up with glee. 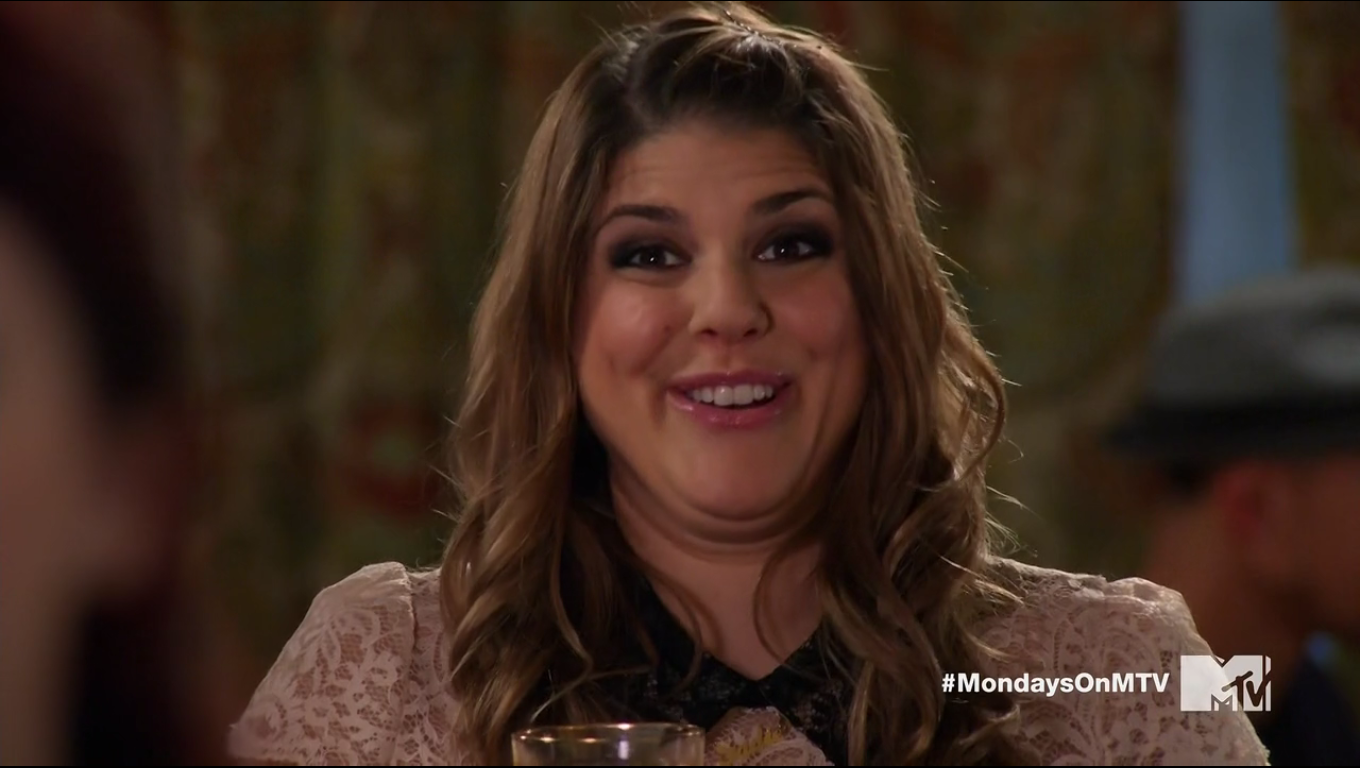 Jenna goes to the kitchen to contemplate how hard it is for her to keep Tamara’s secret and decides that her best bet of surviving this party is to avoid Adam altogether. Just then Adam pops up by her right next to her and the two start to chat. Every sentence that comes out of Jenna’s mouth passive aggressively insinuates that this engagement is a farce. Adam says “I don’t want to plan too far ahead” to which Jenna responds “That’s a good plan!” Jenna removes herself from this awkward conversation only to start an even more uncomfortable one with Gabby.

Gabby: The idea of spending a whole night with my ex who I cheated on with my current boyfriend who once dated both of the girls throwing this party? Yeah, I don’t drink often, but tonight I did a little pre-gaming.

Gabby continues on by telling Jenna she knows a secret about Matty, but before she can spit it out Adam interrupts the two and Gabby scurries off. You would think that hearing about how this party is basically a nightmare of the exes for Gabby would give Jenna some perspective, but it does not. Instead, Jenna heads upstairs to drink wine in her room alone and is interrupted by a drunk Gabby who is noshing Three Bean Salad. Instantly, Jenna forgets about her lying hardship and insists that Gabby reveal that Matty secret. Gabby tells her that Matty loves Jenna, but Jenna doesn’t know whether or not to believe her. Jenna’s mission for the night has officially changed to confirming whether or not Matty McKibben is still in love with her. Seriously, could Jenna be any more self-centered this episode? I am not complaining, Selfish Jenna is entertaining, but Jenna is giving Aria Montgomery a run for her money on being the most self-absorbed character on TV.

Jenna finds Matty sitting outside by himself and as soon as she sits down he says “I really messed things up, we were really good together.” Jenna, of course, thinks that Matty is referring to their relationship, but then Matty says that he thinks he really loves him. It is pretty obvious that he is talking about Jake but in a brotherly way, not a romantic way, which he feels the need to clarify. After Jenna says that Matty should go tell Jake how he feels, Matty says he will be pissed if she tells anyone that he said he loved Jake. I really wished they didn’t put that line in. Why is it okay for these two to be voted “Best Bromance” but it is not okay for anyone to know that Matty said he loved Jake? Why is it not okay for a guy to admit loving his male best friend as a best a friend? No one would bat an eye if Jenna said that about Tamara.

Matty goes to find Jake and the two make up, and this dialogue, below is actually verbatim: 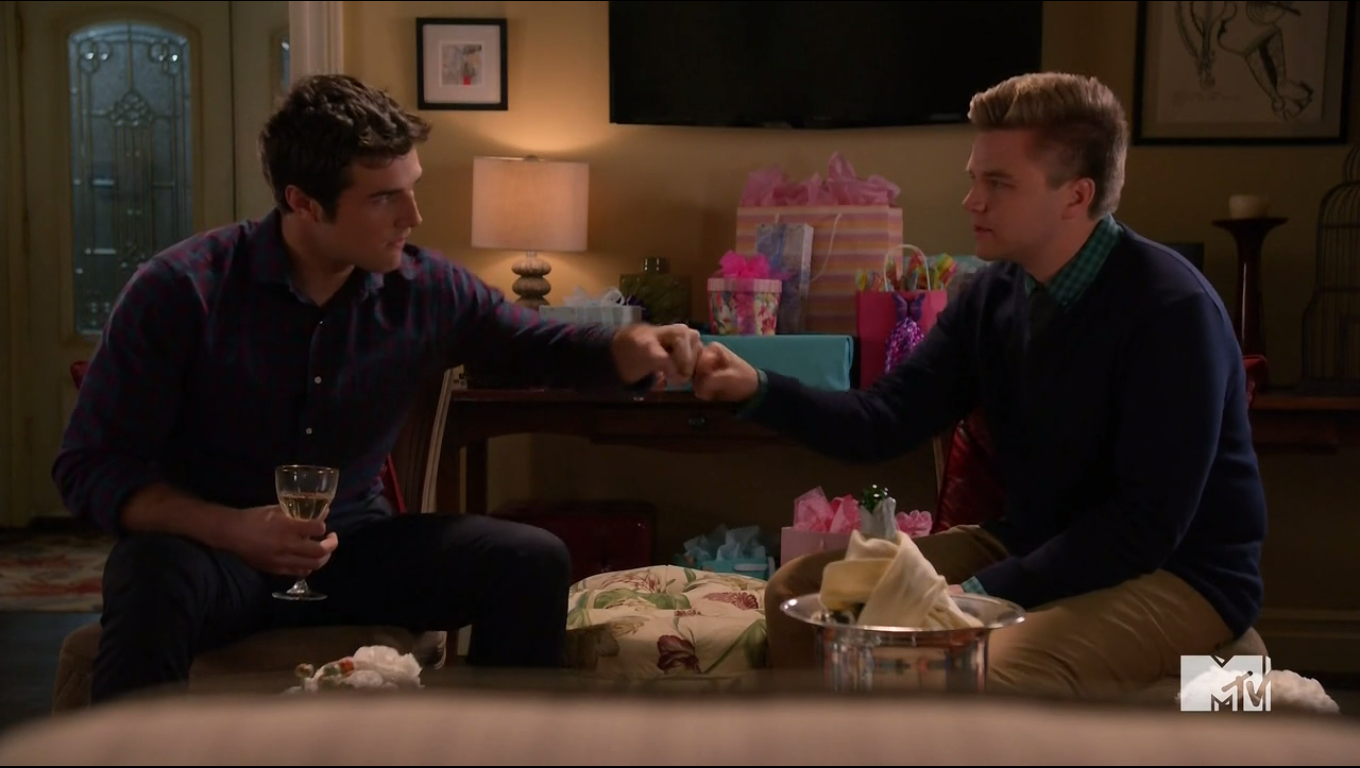 They then pound it out. Fist pound it out I mean. Is there a way to write that sentence without it sounding sexual? I cannot tell if I find this conversation touching or infuriating. On one hand, it can be read is as these two friends that know each other so well they just know what the other is feeling. On the other hand, I get the feeling that they are scared to say what they feel for each other as friends out loud, because that would be unacceptable. It is okay for them to feel this way about each other, but it is not okay to talk about it and that is a shame. If your best friend isn’t someone you care about and trust and love, then why are they your best friend? And why is it not okay for these two guys to say it out loud?

Back to the party, it is time for Jenna to give her Maid of Honor speech, which she was just informed about. She starts talking about how, some people might call what Tamara and Adam are doing stupid but you know, love is love and maybe there is love at first sight. She then focuses her gaze on Matty and decides to kamikaze this already sinking toast by subtly (read: not subtly) making the rest of the speech about her and Matty. Brian runs up, grabs the mic from Jenna and yells out “Beyonce had one of the best videos of all time.” Just kidding, Jenna was not holding a mic. But in all honesty, Brian saves Jenna from herself by taking over the speech and wishing Adam and Tamara a happy life together. A phrase that normal people use in engagement speeches and a phrase Jenna was apparently incapable of saying.

Brian confronts Jenna after the speech asking why she is being such a bitch while also making constipated faces at Tamara and Adam all night. The pressure of being such a good friend and keeping Tamara’s secret to herself becomes too much, and Jenna yells out to the whole party that the engagement is a sham, and that T does not love Adam. When Adam asks T if this is true, she is unable to deny it and he storms off, essentially breaking off the engagement. Everyone at the party is in shock and awe, and of course Sadie’s face lights up like a Christmas Tree.

After everyone leaves, Jenna tries to console Tamara. T realizes that she really did love Adam which leads to one of my favorite Tamara quotes:

Tamara: I love Adam. I might love wedding planning but I can love Adam, too. I have enough love in my heart for both.

The fact that she puts her love for her fiance and the act of wedding planning on the same level is just amazing. Her emotions are everywhere, she is pissed at Jenna and herself, but mostly Jenna, but mostly herself, and she is scared that she just let the love of her life walk out of her life.

In Sadie News:
Sadie and Sergio get in a fight about about what marriage. To Sergio, marriage signifies the ultimate love between two people. For Sadie, marriage signifies two people that hate each other so much one is willing to get arrested to get away from the other. The two realize that they are very different but still love each other, and then have sex on Jenna’s parents bed.

Sadie Quote of the Week:

Sadie: I am totally using that, along with IBS.
Sergio: What is that?
Sadie: Irritable Bowel… let’s not talk about it, I might want to have sex again later.

@theworkprint
Follow
Previous article
‘X-Files’ Mini-Series Trailers: The Truth Is Still Out There
Next article
‘The Muppets’ review: Piggy, under the influence of Josh Groban